12 Incredible Ski Experiences You Can Only Have in Utah

We say Utah is a unique ski vacation. Almost no destination in the United States offers the close proximity of so many resorts to an international airport and vibrant cities — especially not Denver.

For those of you flying in, it all starts at Salt Lake City International Airport, direct from up to 90 cities. (A few lucky cities could choose the Provo Airport for quickest access to Sundance. See item No. 8, below.) From SLC International, the Wasatch Front is all yours. Ten minutes downtown. Thirty minutes to an hour brings you to one (or more) resorts (see Nos. 2 and 3 below). All this, alone, makes Utah ski getaways unique.

But it doesn't end there. Easy access to top ski destinations is only the beginning.

1. Be delivered via conveyor belt into a huge, powdery bowl.

The Peruvian Tunnel at Snowbird transports skiers and snowboarders 600 feet to the backside of the resort by shooting them through a 12’x10′ tunnel punched through the face of the mountain. You wouldn’t notice just by looking at the Hidden Peak ridgeline, but 200 feet below the top, skiers and riders are being conveyor-belted through the mountain from Peruvian Gulch into powder-and-sunshine-filled Mineral Basin, like a little assembly line of .

The first tunnel of its kind in North America, this crazy contraption gives you access to Mineral Gulch when ridgetop winds would otherwise prevent a tram ride. Plus, you get to travel 800′ to another part of the mountain, skipping right over challenging sections of Chip’s Run, without even messing up your hair.

2. Hit six resorts in one day. 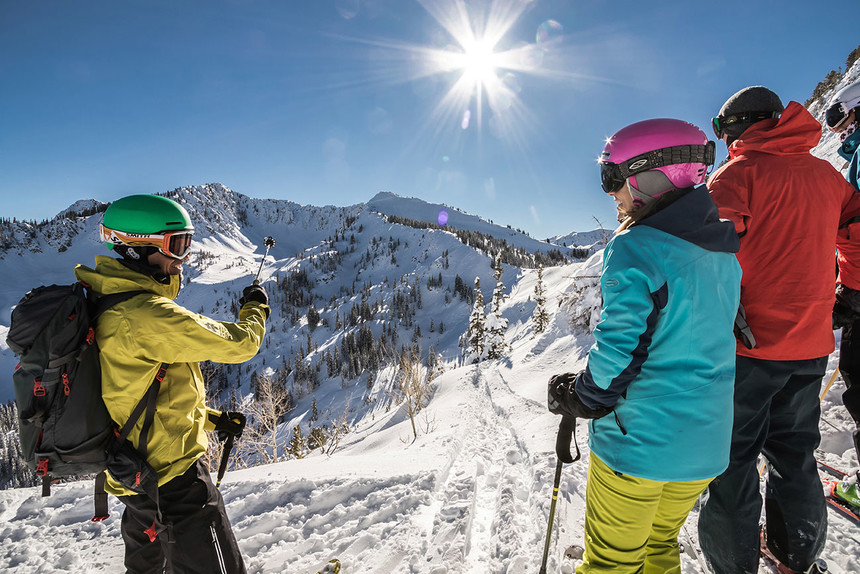 There’s nowhere else in North America where you can access so many ski resorts on a single adventure with such minimal hiking.

The Ski Utah Interconnect Tour begins at Deer Valley Resort, where you slip out of bounds and into the huge Wasatch Backcountry for hours of untouched powder. Hike into Park City for some chairlift-assisted gain in elevation, and then, after ducking the rope for some glorious pow turns in Big Cottonwood Canyon, you’re off to Solitude, Brighton, Alta, and finally Snowbird.

This tour’s for intermediate and advanced skiers in decent athletic shape. Guides will take you through tons of leg-busting off-piste powder and, as you can imagine, there’ll be some side-stepping and hiking, including one gnarly uphill traverse along the super-steep Highway to Heaven. But there’s no other way to get a sample of six of Utah’s best ski resorts and the mind-blowing, virtually untouched beautiful backcountry in between.

3. Get from the airport to the mountain in under an hour.

From nearly 90 cities in the country, you can hop a direct flight SLC to be skiing or riding before lunch. It takes less time for skiers and riders flying into Utah to grab their luggage, pull their U-shaped travel pillows off their necks, gear up, and be standing at the top of a snow-covered pitch than it does for me to get a pizza delivered to my house.

The hardest thing about getting from the airport to the mountain is deciding which mountain to head for — Park City is less than 40 miles away — only a half-hour drive, but there are nine other options all within a 60-minute drive.

4. Ski the biggest mountains in America. 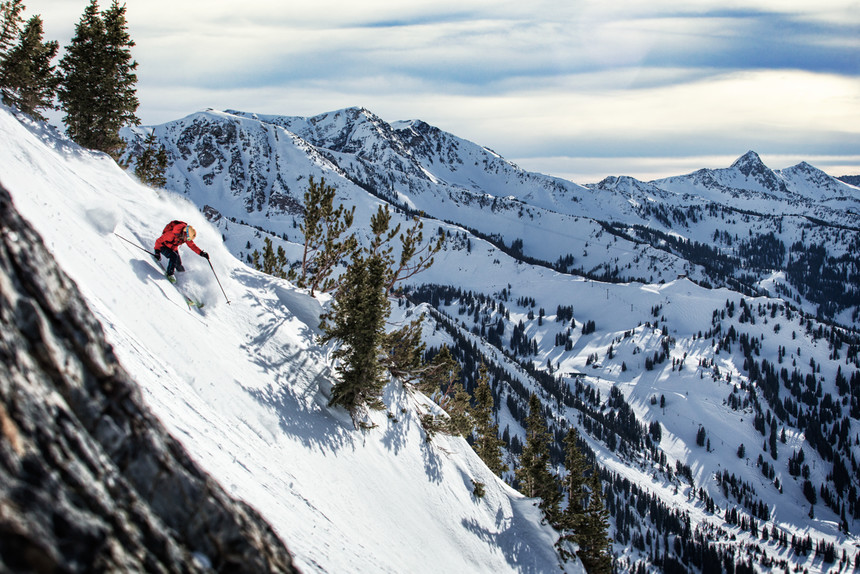 There was a time when Utah's Powder Mountain Resort laid claim to the biggest mountain in America. It's 7,000 skiable acres eclipsed the next closest by hundreds of acres. Then something magical occurred. Park City and Canyons joined forces to become the largest ski resort in America, at 7,300 acres. See where we're going with this? Yep. 14,300 acres. That's about the size of Manhattan Island. Somehow it feels a lot roomier out here. Interested? Read on:

Powder Mountain (Pow Mow) backs up its girth with an impressive 500 inches of annual snowfall. Best of all, thanks to the multiple higher-profile ski resorts sitting between it and Salt Lake City, there’s rarely a lift line, even with only four lifts up the entire mountain. How is this possible? Gratefully, you don’t have to hike — America’s biggest mountain also has one of the best cat ski rates around: roughly $20 (at time of writing) for a ride into Cobabe Canyon or up to the tippy-top of Lightning Ridge early for first tracks on some epic ungroomed Utah pow.

As for Park City Mountain? Well, here you'll find a full arsenal of lifts to runs of all skill levels and all manner of on-resort amenities in tune with the Park City name and brand. Even the gondola connecting the two resorts is worth the ride for the opportunity to rest a few minutes while taking in the scenery. There's too much to cover in a short paragraph, so read more here.

Two incredible mountain valleys in Ogden and Park City. Pick one or pick them both. They'll keep you more than busy for the duration of your visit.

5. Feel unworthy of sitting in a ski lodge chair.

Yes, there are amazingly long and fast groomers (including the actual Men’s and Women’s Olympics Downhill courses), a truly world-class gondola system that allows you to ski and ride nearly 3,000′ of uninterrupted top-to-bottom vertical, and the thrill of earning some turns down No Name (face shots for all!)…. These are the reasons people come to Snowbasin, but they aren’t the only things you’ll walk away from with a grin plastered across your mug.

It takes a lot for me to care about how a lodge makes me feel, but Snowbasin is, no joke, guaranteed to impress even the most skier out there. We aren’t talking about little warming hut shanties that serve up mystery-meat chili with traces of hairnet. Walk into any of Snowbasin’s three lodges and you’ll immediately feel like an awkward but excited fourth grader sitting down at the adults’ table for the very first time, nervously eyeing the chandeliers and praying you won’t embarrass yourself as you share a meal — and your ski stories from the day.

It’ll be the first time you’ve ever worried about ruining a lodge’s English Wilton carpets clomping around in your soaking-wet ski boots. And the one part that makes this all completely unique? You’ll reluctantly climb out of your comfy, upholstered, is-this-real-leather? chair with actual money left in your wallet. Even with all the wardrobes and sconces and marble and brass, that slow-smoked grass-fed brisket (with all the trimmings!) you munched on still only cost $15.

6. See three generations of one family working an entire mountain just for you.

The Seeholzer family’s been running Beaver Mountain since its inception in 1939. It’s said to be the longest family-run ski resort in America, and definitely the only place where you can see three generations of working hard to make your winter dreams come true.

You can clearly see the lack of corporate ownership here. Lift tickets are just $48/day, and you can still buy lunch for your family at the restaurant (real burgers, without any of that fancy lettuce and not a hint of aioli) for less than the price of a tank of gas.

7. Cruise the same halfpipe that won the USA its first medal sweep in nearly 50 years.

2002 was a huge year for Park City, and for snowboarding as an Olympic sport. When Ross Powers, Danny Kass, and JJ Thomas swept the medals platform for Men’s Halfpipe (the first time that’s happened in an Olympic event since 1953), they legitimized the American-born sport and cemented the Park City superpipe onto the bucket list of riders everywhere.

Their 22′ pipe is one of the most meticulously designed features on the and is training grounds for pros from all over the world to come and hone their skills. Expect to be rubbing elbows with some of the biggest names in snowboarding — practice before you get here so you don’t humiliate yourself in front of Torah Bright.

8. Relax at a swanky celebrity-owned resort.

You know the one I’m talking about: Sundance. The only place I’ve ever heard of where you can shred black diamonds in the morning, then spend the afternoon learning about and taking a jewelry-making class, followed by movies in the onsite screening rooms.

The entire property is a bit like an LL Bean catalog: inexplicably rustic, sophisticated, and comfortable all at the same time. meticulously curated perfection might throw you off just a little bit, but don’t fight it. Hunker down into the leather of an oversized armchair with a cup of tea and a book from Robert Redford’s private library, and whisper silent thank-yous for this piece of movie-star luxury in Utah.

9. Ride in an orange ball of warmth.

No icicle boogers for you this time around. At Park City from the Canyons Village side, you can feel super pampered while riding up in the first-ever heated bubble chairlift in North America. The seat oozes out enough warmth to keep your butt toasty — then, on windier days, you can pull down the orange plexiglass windshield to keep your delicate face out of the frigid temperatures and wind.

This isn’t a feature built to cater to pansies, though. Once you’re fully encased in your bubble, you’re extra aerodynamic — which means the Orange Bubble Express can run at a higher speed than most open-air chairs, thawing you out and getting you back into the powder faster.

10. Loosen up at the world’s only ski-in distillery. 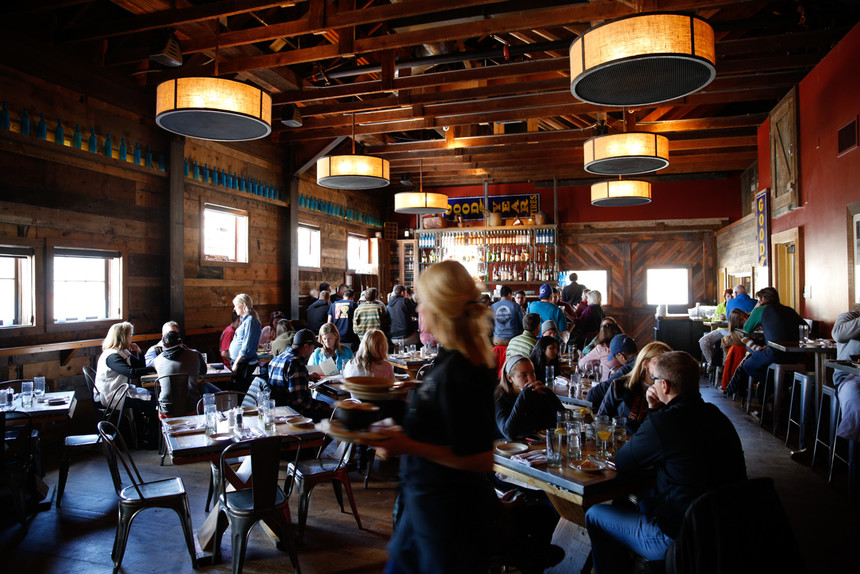 Yeah, in Utah. Ski right up to the High West Distillery & Saloon for a session of small-batch local whiskey tasting paired with the saloon's Western-inspired menu, then head back out for some more Park City pow.

Turns out, Utah’s got a long history of distilling. The High West Distillery & Saloon is even on the National Register of Historic Places as the first legal distillery in the state since 1870, and it’s probably the only place on Earth where you can get a decent Old Fashioned while still wearing your ski boots

11. Check out one of the highest resort towns in America.

Spanning two peaks and about 650 acres of terrain, it might sound small compared to the behemoth ski resorts to the north, but with a nosebleed-inducing 9,600′ base elevation, Brian Head is tall. And even with a peak elevation of 11,307′, it’s still one of Utah’s super-secret powder stashes.

This place has everything you want out of a Utah resort and absolutely nothing you don’t. The same dry Utah pow and friendly faces, but with uber-cheap lift ticket prices and a mellow ski town that probably doesn’t sell a single furry hat.

12. Experience the Greatest Snow on Earth

Yup. It’s true. Snow so light and fluffy that you can clear the sidewalk with a leaf blower. And yet. And yet, on the mountain, especially in the Cottonwood Canyons of Salt Lake City, something really special happens when layers of this perfect snow accumulate. It's called "flotation." Read more here, but trust us — this isn’t your average snow: It is what you want to ski or ride on your mountain vacations.