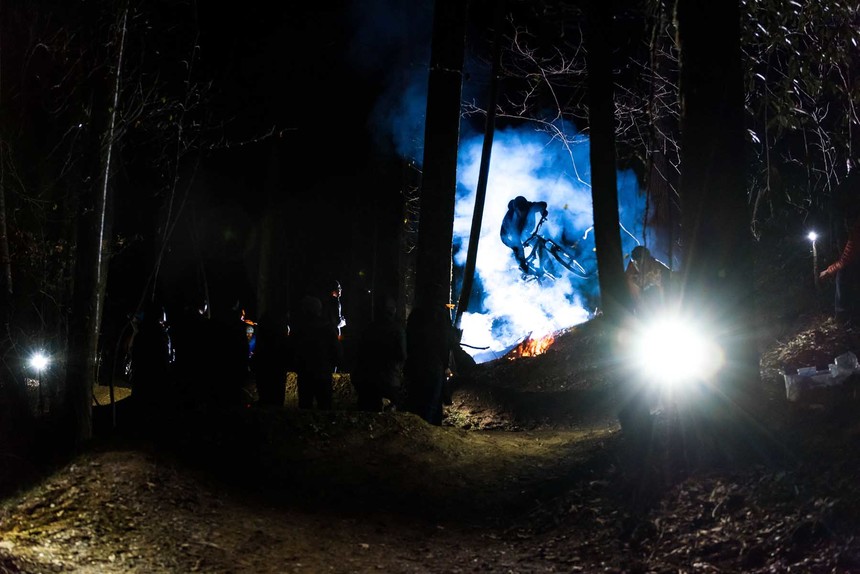 The 2017 Maxxis Appalachian Summit was heaven on Earth. They flew a bunch of us journalist-types to the purpose-built Mulberry Gap mountain bike retreat at the Cohutta trails in Georgia, gave us all the beer we could drink, an ass ton of a-list Pivot bikes with brand new tires, and free and willing shuttle service.

We tested Maxxis' new 2.8" Rekon and DHF as well as the 29" Shorty tires on Pivot's 429 and Switchblade and got a sneak peak at the new product rolling out for you, the consumer (below). 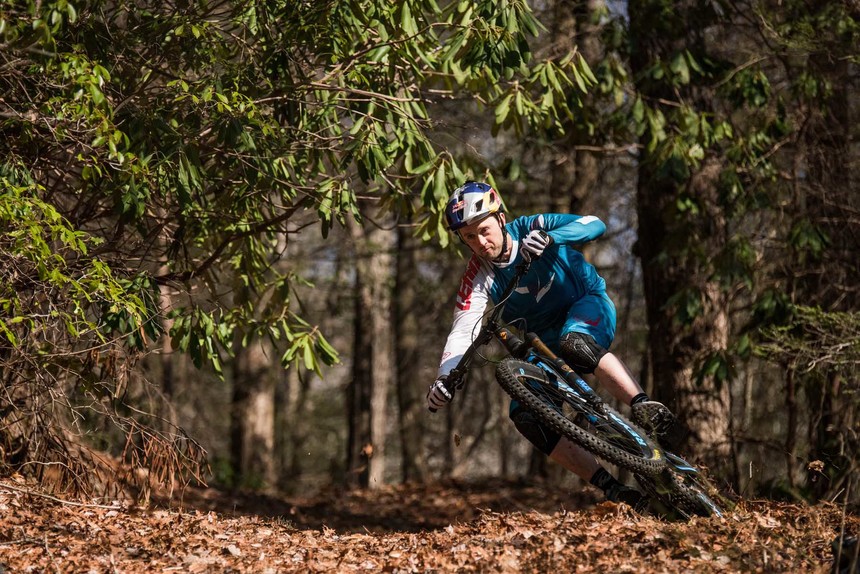 I flew into Atlanta and delicately avoided political talk with our driver during the two hour ride to northwest Georgia's wilderness. Arriving at Mulberry Gap around midnight, I was met by Bobby Brown, Maxxis' marketing specialist. I had a quick Terrapin pilsner and pet the dog before heading off to the rustic cabins to crash.

If you’re looking for a fine place to take a bunch of buddies and ride for a few days, Mulberry Gap is the ticket. The food is delicious, showers are hot and clean, and the hot tubs work great. A charming young couple and their family runs the place and they don’t mind you sitting around a fire drinking and saying stupid shit all night. They're not above whipping out a bottle of local bourbon after midnight, either. 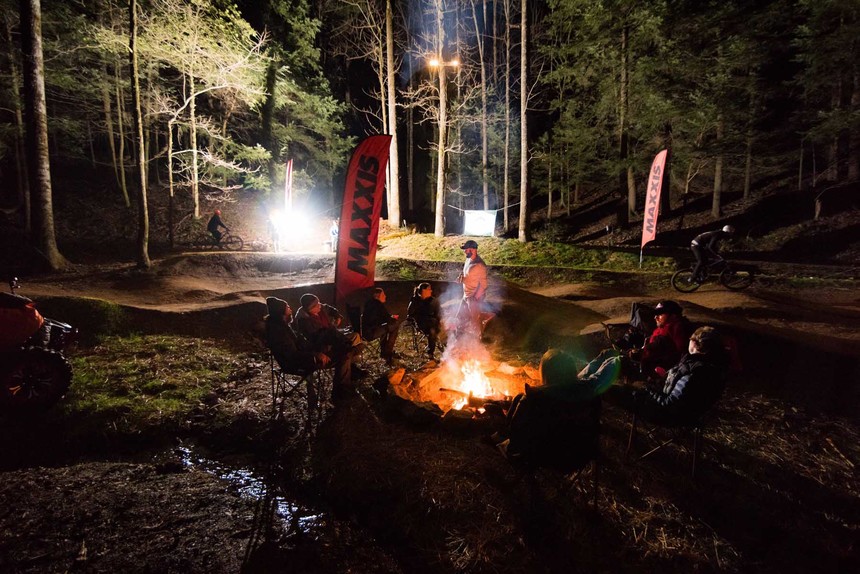 Drinks were had. Lies were told. Timothy James photo.

Over the course of the weekend, I got to hang out with all the folks at other MTB outlets I admire most—all of whom had been there before and know the trails. And they were characters to say the least.

Dicky from Bad Idea Racing informed me that riding on gravel while intoxicated is legal, Aaron Chase hucked off the roof of the dining hall, and the Canadians from NSMB can pierce the side of a beer can using only their thumb (it’s called a thumb-gun, which sounds like a sex thing, but it isn't). Together, we also learned that building a fire on a jumptrack in the woods and jumping it while wearing an inflatable sumo-suit is a remarkably good idea. 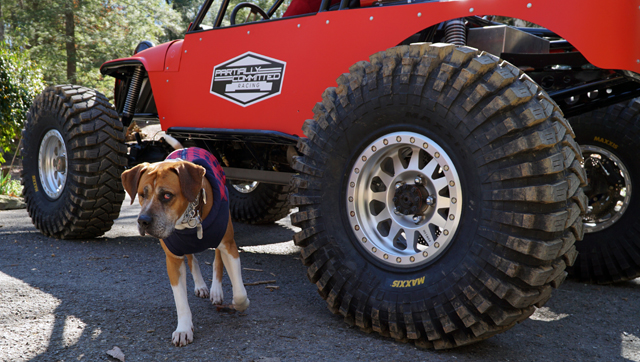 My absolute favorite dog. He only has one eye, and it doesn't work so great, but he's a champ. GW photo.

As far as regular trails and normal riding goes, Cohutta and Pinhoti riding is high enough so a sea-level dweller might have a huff-and-puff moment on the first climb or two. The singletrack there offers great visibility, fast corners and fun straightaways. So anaerobic or not, let it flow. The leaf cover from a heavy canopy can get a little drifty on fast corners.

The zippy and relatively wide trails offer nothing too crazy, so when you get here, just go all out. Rip through the streams like a kid jumping into a puddle (if you're ok with wet feet). And most of the nasty rocks have a solid line of sight, so riding them on-site is totally fine.

The classic P2 and P3 trails are a short pedal from the lodge. Of course Mulberry Gap will arrange to shuttle you up and down to your heart’s desire. Or put on the big-boy pants, earn your turns and climb up (I shuttled mostly). 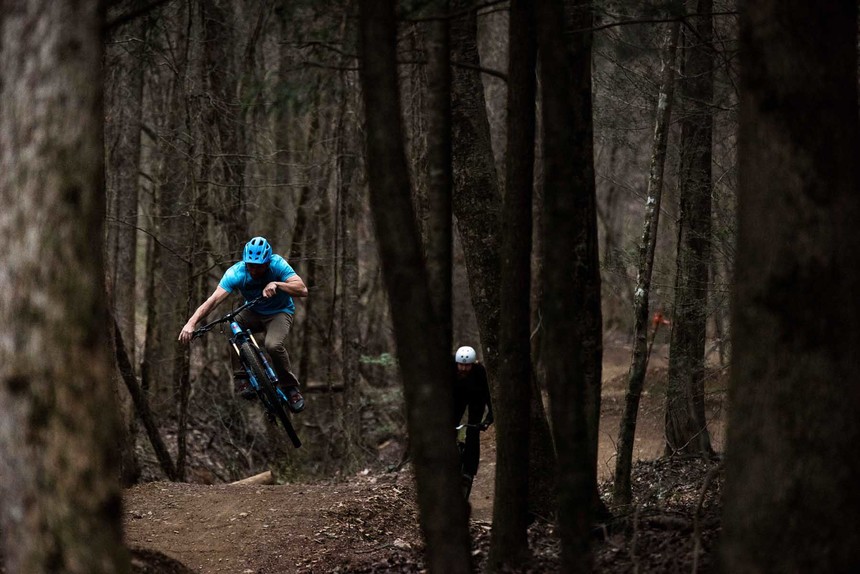 Some fast and jumpy straightaways on the P2 trail. Timothy James photo.

Pivot brought a plethora of bikes to the event. I rode their 429 Trail on the first day set up 27.5" with a 2.8" Rekon in rear and DHF in front. The 429 is a fun, modern trail ripper with 130f/116r travel, spot-on head and seat-tube angles. You can also run it as a 29er, using the same fork. Something you'll see from a lot of manufacturers this year. 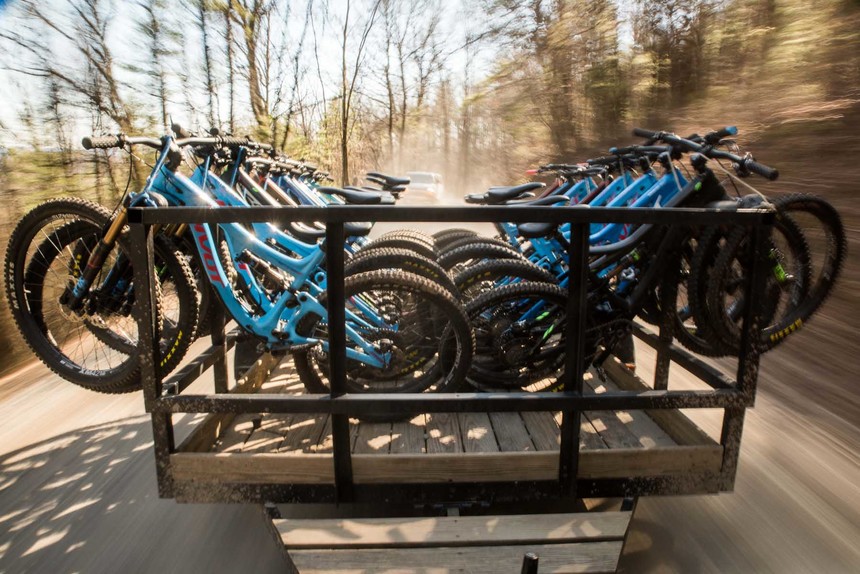 I also rode their current media-darling Switchblade, with 150f/135r travel, using the same 27.5 plus setup. I did an afternoon on the same bike using 29er wheels and Maxxis' Shorty tires. 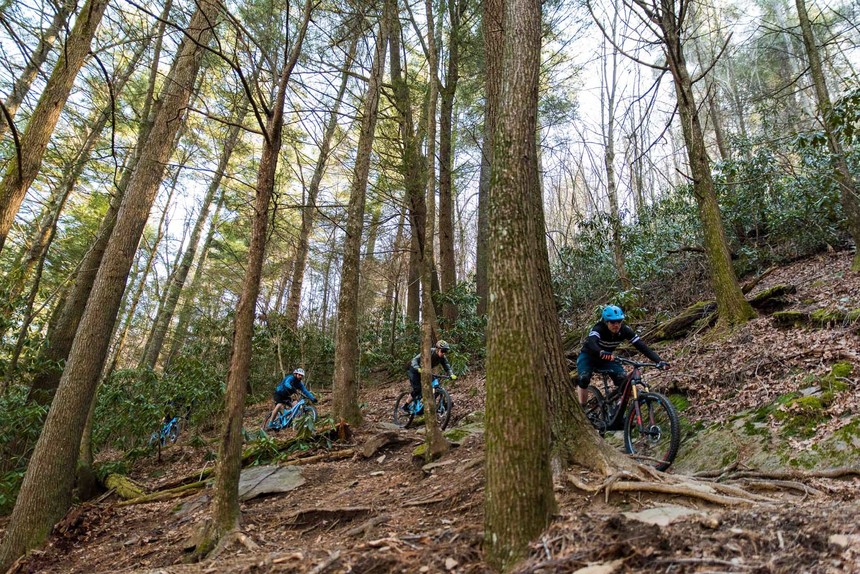 Truthfully the flowy trails were not that technical so the Switchblade, while an awesome ride, felt a little like a bazooka at a knife fight. It might be a better rig if you're regularly hitting the burlier side of things.

If you’re looking for useful, actionable tire information, here it is; Maxxis has put a lot of focus into fixing what ails many plus-sized bike tires. Specifically too-soft sidewalls and a lack of size options. They’ve doubled reinforcements, added rubber shims to protect against pinch flats and now offer tires in every .1” or so increment of width between 2.2 and 3.0. So, have at it 2.6. Seriously, though, I’m pretty psyched on the 2.6 DHF and DHRII options.

The Cohutta Range and the 2.8 Minion DHF. GW photo.

But 2.8 was great too. Maxxis has been leading the way in adapting tires for the wider rim movement. TGR reviewed the 2.8 DHF/DHRII combo a short while back, tires I thought were fantastic. But they didn't stop with DHF and DHRII. 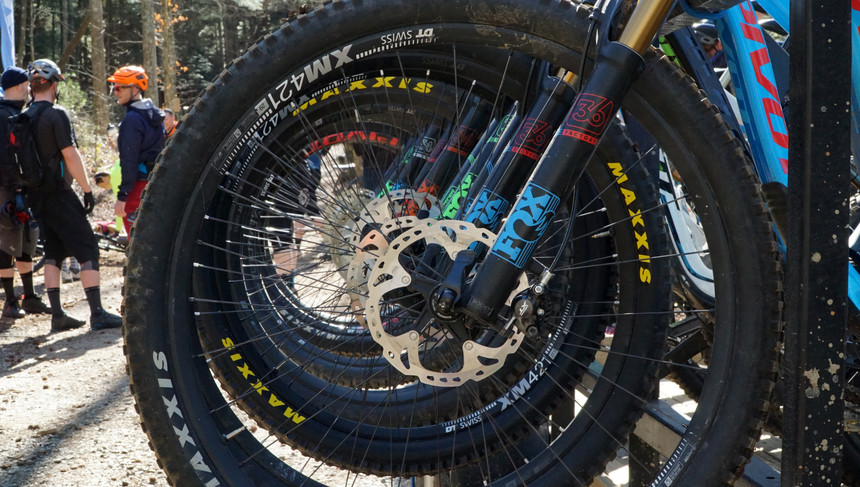 Their updated Rekon tire has a butyl shim just above its bead to prevent pinch flats when running lower pressures. It's a bit like a built-in Huck Norris, but with far less weight. That, coupled with a tread design which allows the Rekon to drift in a fun, predictable way while still retaining climbing prowess, makes it a fabulous plus-size rear option. Maxxis has created several new modulations of casing protection and silk shields (sounds like a new condom, right?) so be sure to check out all the options when buying. 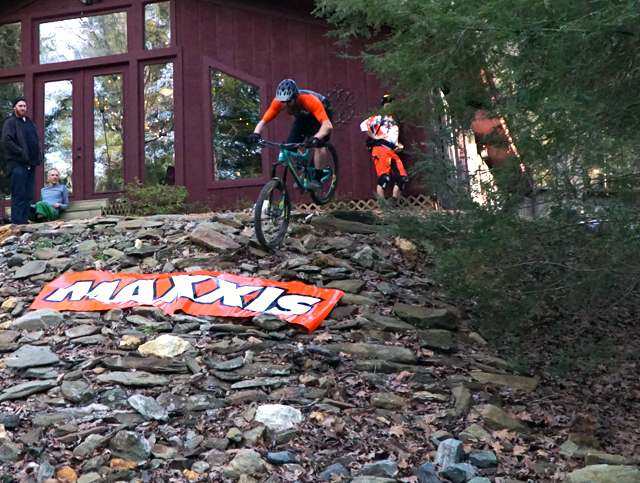 Yes, all these improvements and new tire sizes create an almost dizzying array of choices. I don’t have any magnificent shortcut for picking the right tire for you (except for this TGR article on how to pick tires), it still involves a bit of homework. But Maxxis is putting in the work to reward your effort. New tires can really make a difference at the start of the season so start thinking about it now. 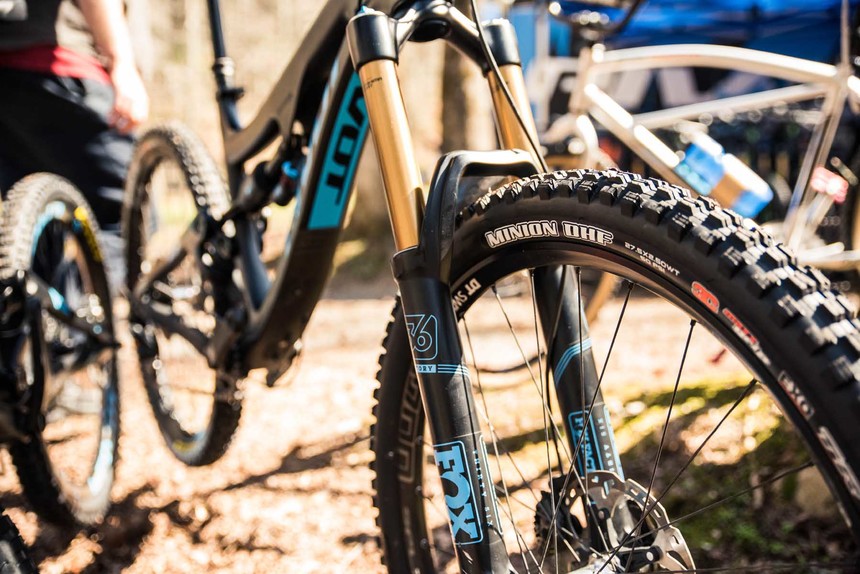 I was also able to ride their burly, square-knobbed 2.4" Shorty 29er tire, which has every bit of grip you could want, but I'd advise using that one more in gravity or heavy mud situations.

After shredding my early-season legs to bits over three days it was time to go home. This trip was the perfect attitude setup for the upcoming 2017 season. Got to preview some great stuff and I'll be bringing you even more this year. 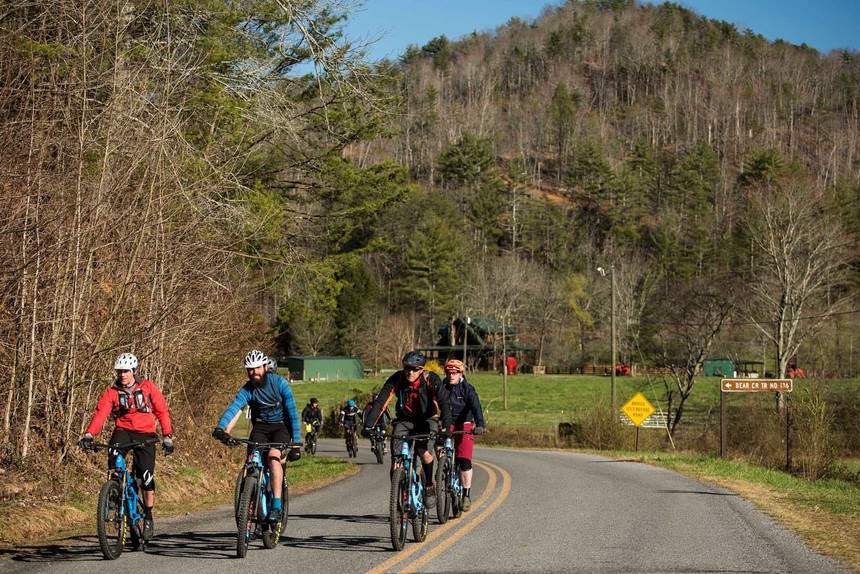 After dropping down the lower Bear Creek trail, a short roll back to the vans. Timothy James photo.

The best lesson from Maxxis' 2017 Appalachian summit was that this sport is just chock full of awesome people. You have chosen wisely. 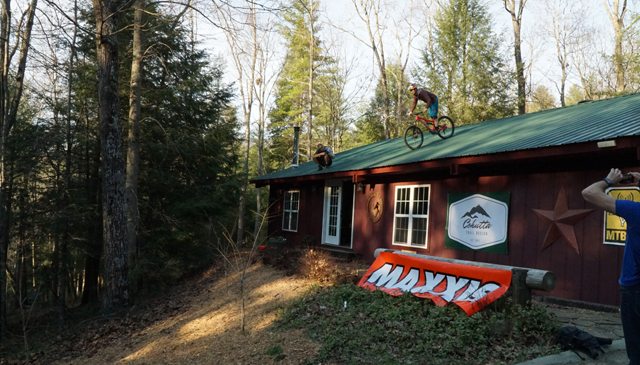 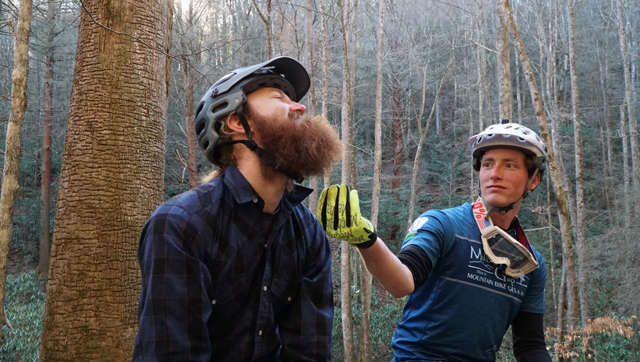 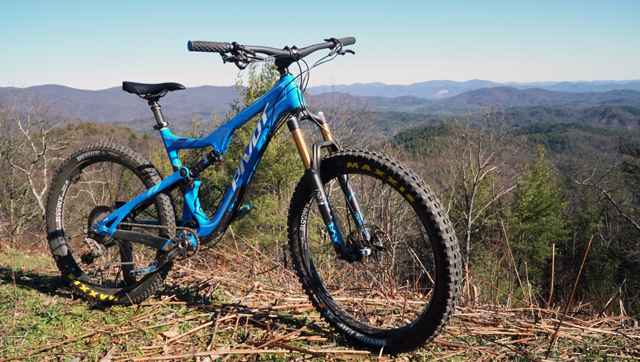 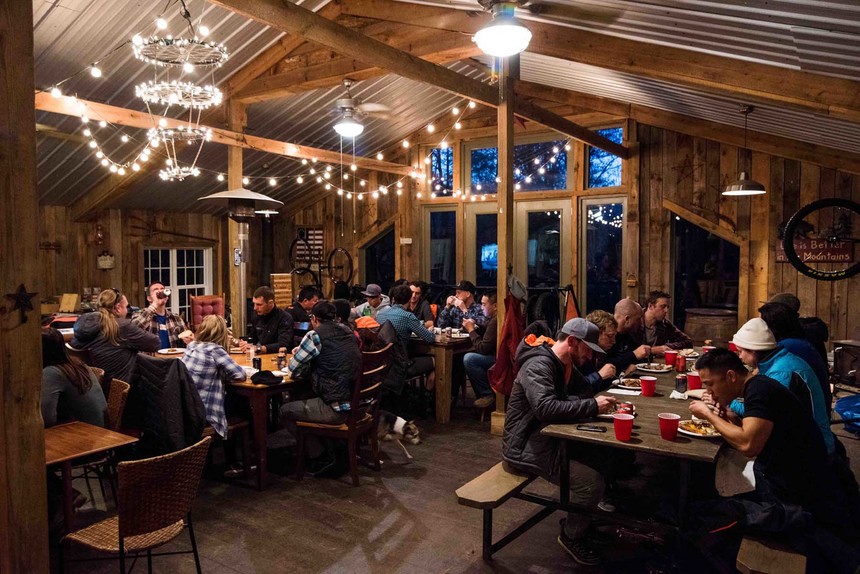 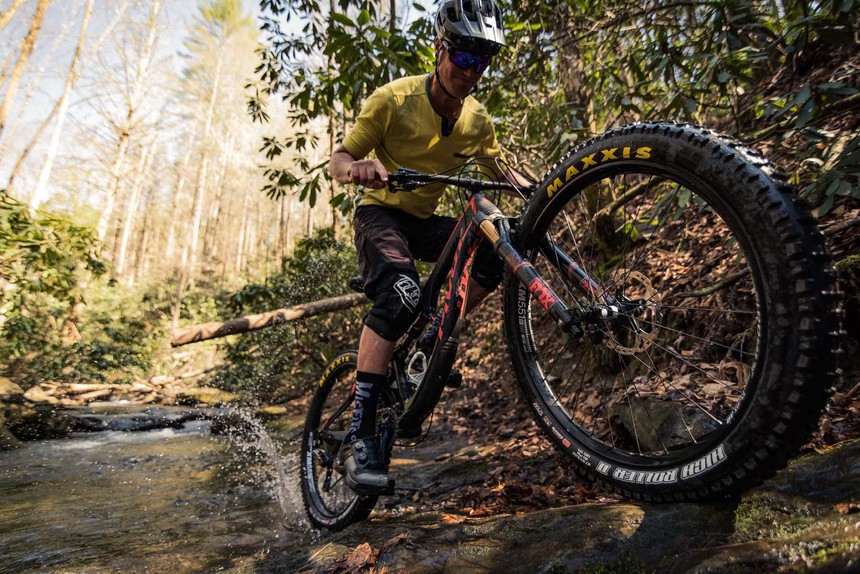 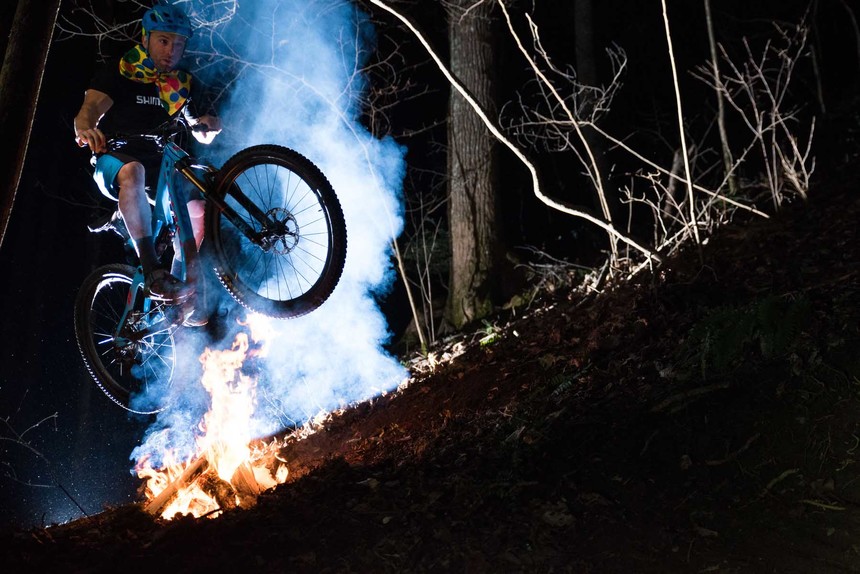 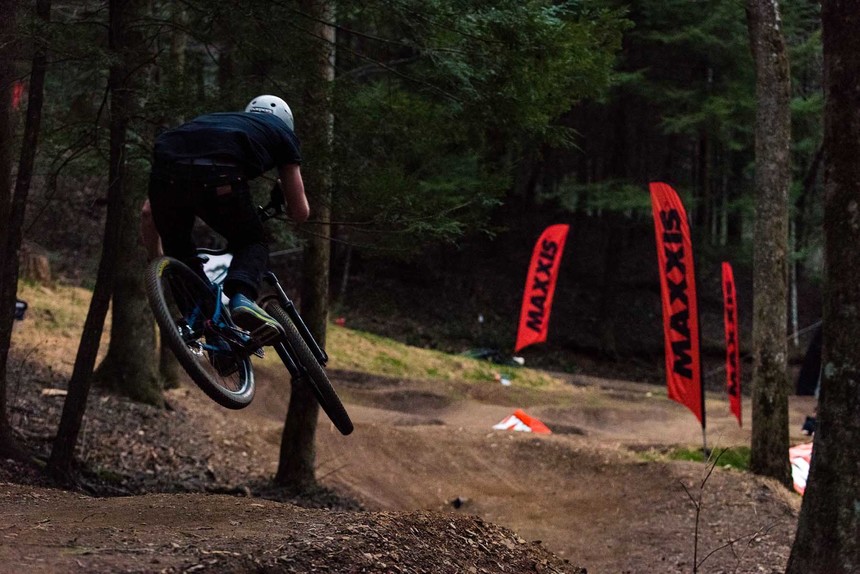 Jumpline into the pumptrack at Mulberry Gap. Timothy James photo. 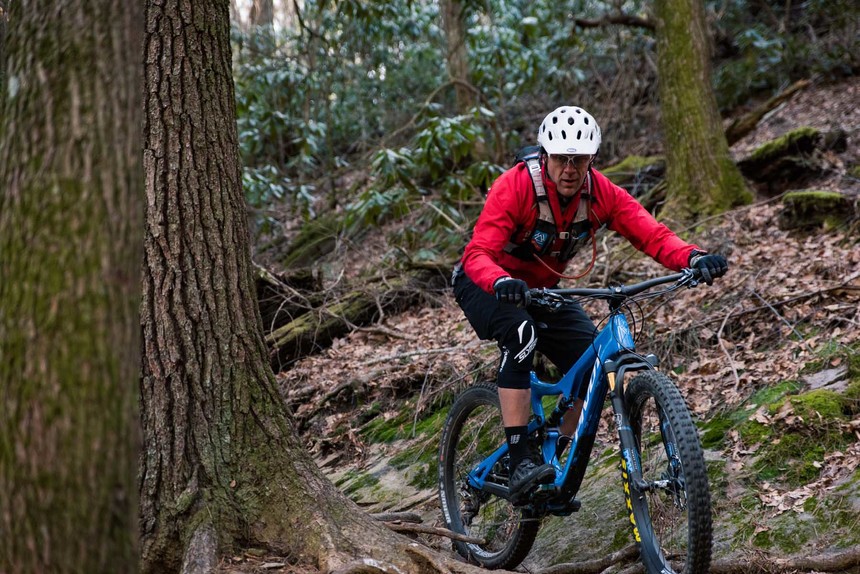 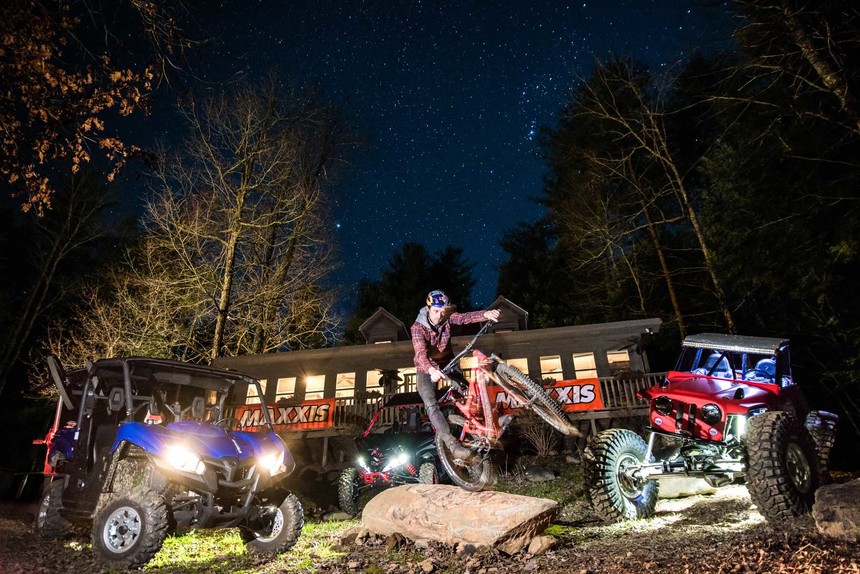