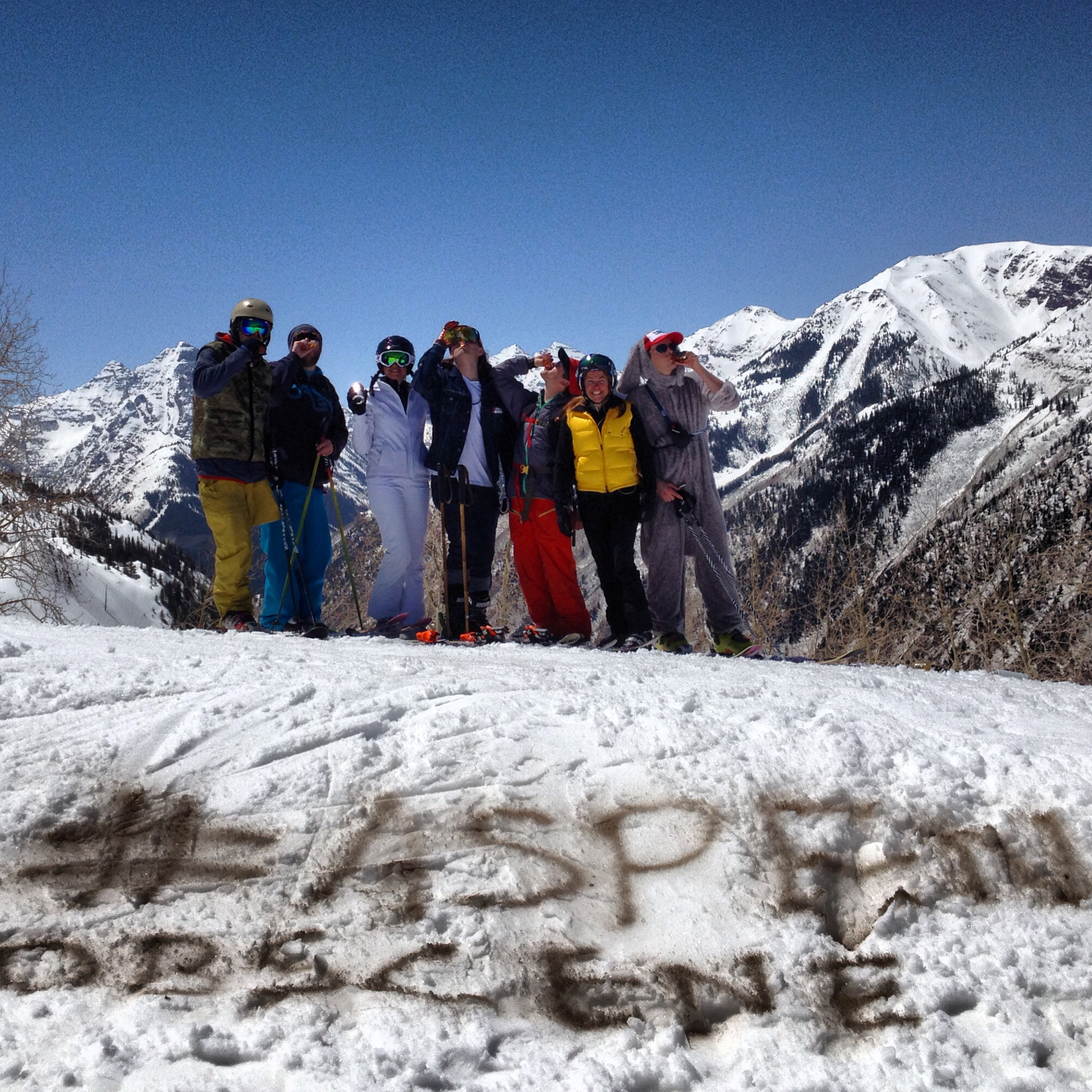 Nobody is concerned that Than is missing. We haven’t been in Aspen for 12 hours, and we’re already a man down. Breakfast at Aspen’s Jour de Fete is just too damn good. The genuine Frenchman in charge of whipping up espresso drinks and croissant concoctions could make me forget my grandmother going missing in Chicago’s Southside with a bag full of cash and a slow pace. The sun is shining, and Than’s empty seat at the table makes it easy for us to spread out—keeping our hangovers from combining into the perfect storm… For now.

The plan was simple enough—get to Aspen for the extra bonus closing at Highlands. Late winter in the Southern Rockies is making up for a lackluster early season. Colorado’s inbounds terrain is the best it’s been all year, and the lifts at Jackson Hole hadn’t been spinning for nearly a month. 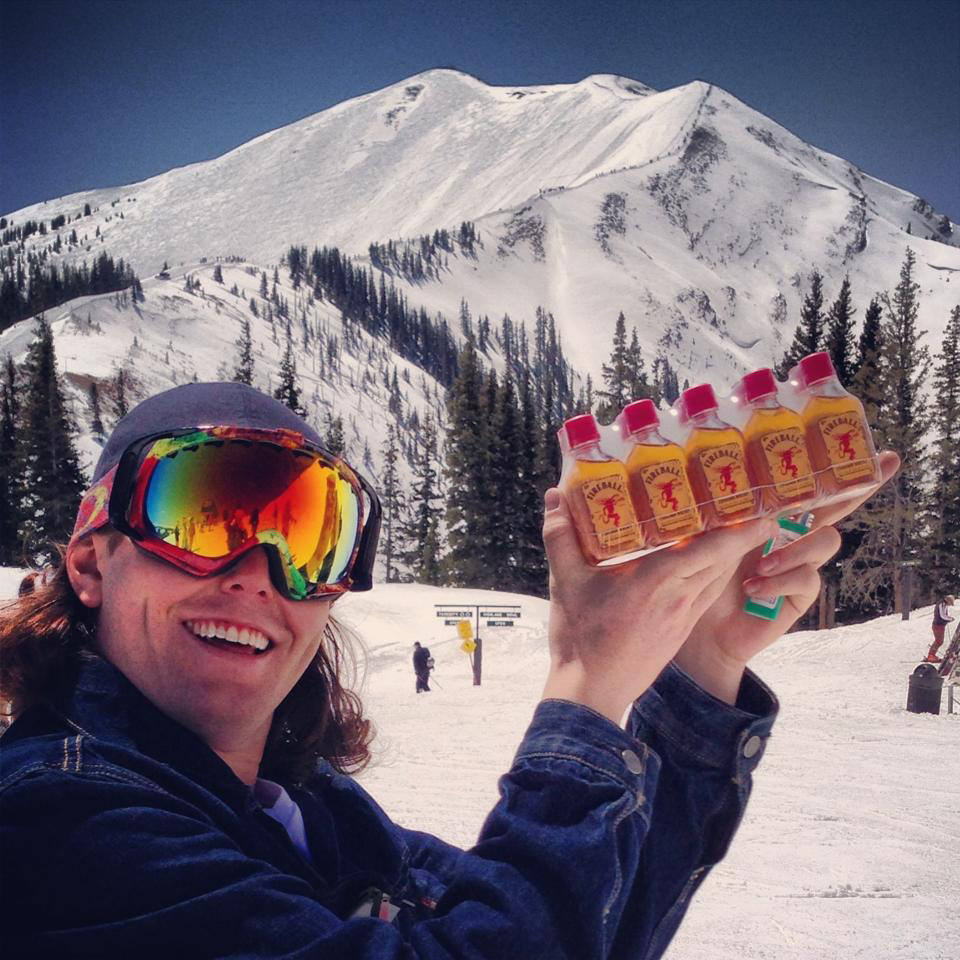 Aspen, contrary to the Bogner and Bentley façade, is a dirtbag’s delight. So, to get in touch with Aspen’s seedier side, Than, Cook, and myself jumped into a car and decided to see for ourselves.

We arrive late Friday night after a whirlwind of snus tins and malt beverages. The Limelight hotel is surprisingly cheap during the off-season and their breakfast is way above average. They also allow dogs, so pick up a puppy on the way over as a conversation starter.

After stocking the fridge and then promptly trying to empty it, we wander over to Little Annie’s. Seventeen dollars later we have a pitcher of Budweiser and five shots of Early Times whiskey. Repeat. Repeat. Everything begins to taste like band-aid and herpes. Repeat. Two repeats later and I’m drinking out of a shoe. 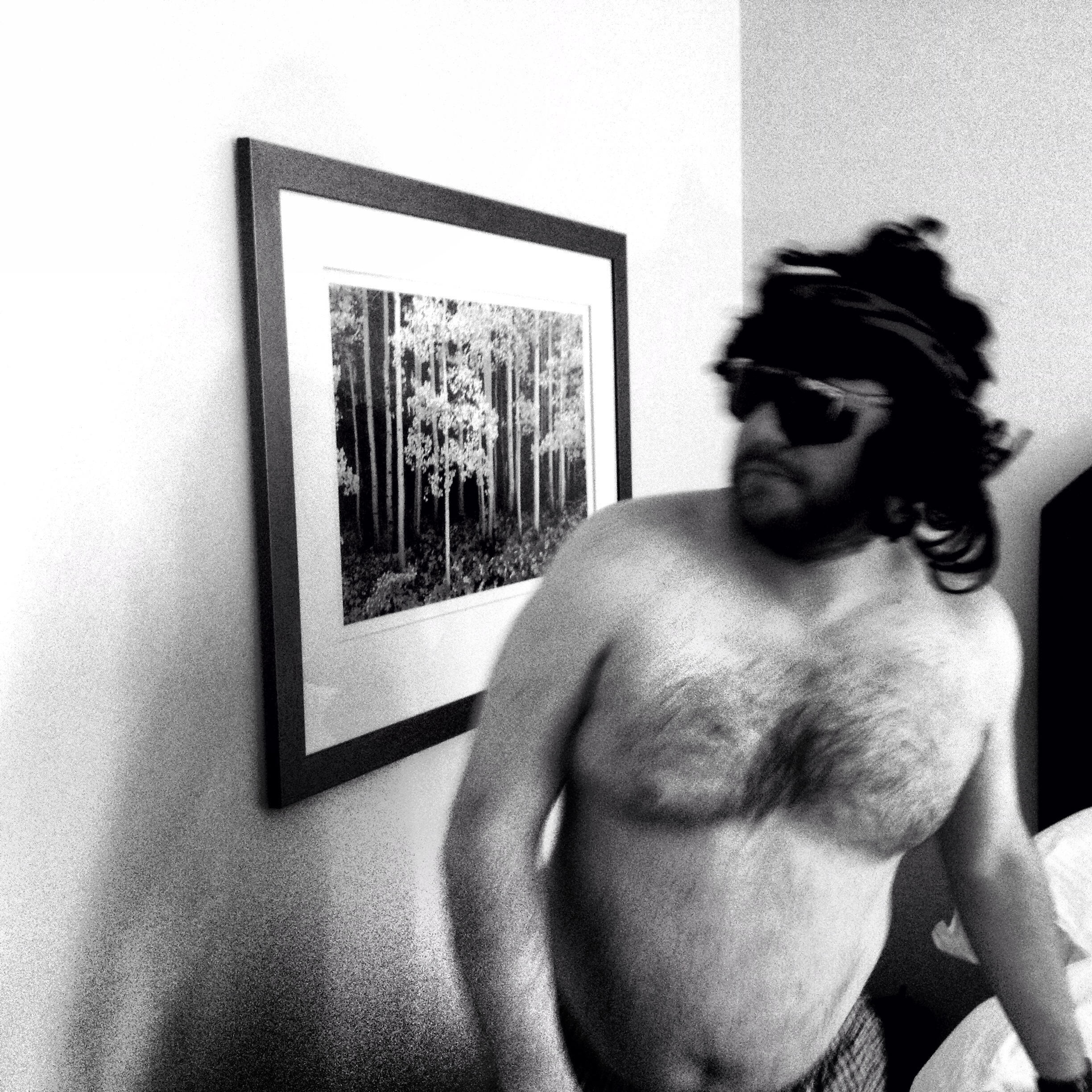 By the time breakfast rolls around, Than is missing. We’re not worried. You will meet the girl/guy of your dreams in Aspen. It’s what happens when the entire population of the town, and all of its visitors are there for the soul purpose of having fun. You might even throw up on said dream girl’s porch. Than shows up as we wrap up our meal with a smirk.

After a few more breakfast beers, it’s ski time. We arrive greeted by none other than Klaus Obermeyer. He yodels for us and announces the skiing is “Eleven out of ten!” 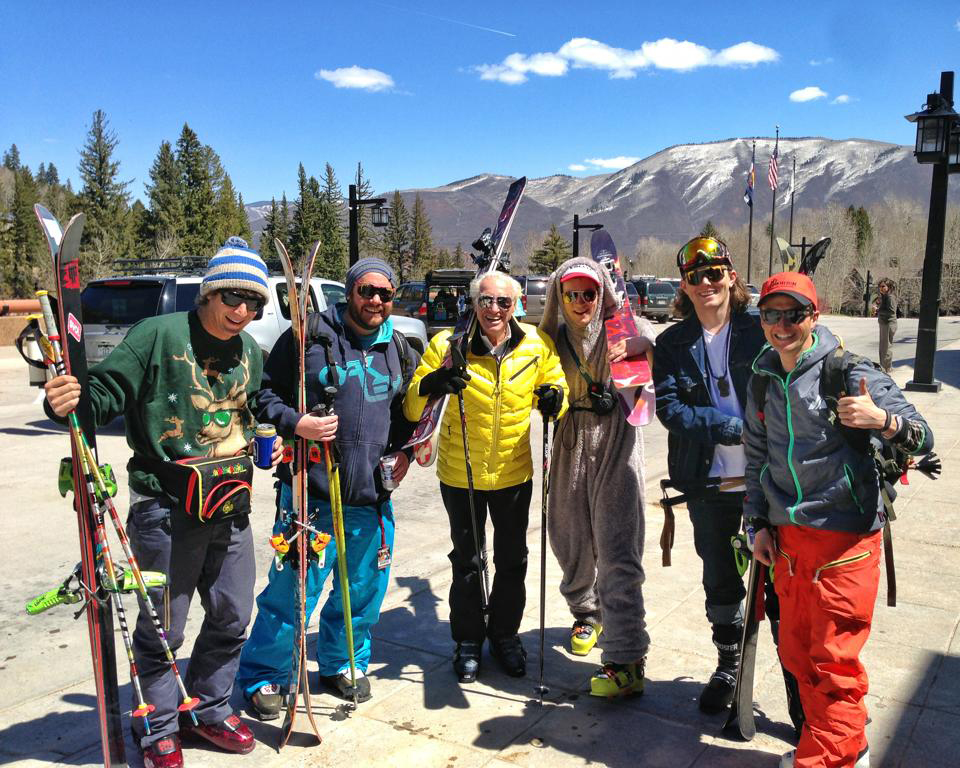 He’s right. All of Aspen Highlands’ 3,635 vertical feet have achieved a miraculously good corn cycle and the snow is nothing short of heroic. Snow fuels celebration, which in turn fuels skiing. Somehow we don’t get removed from the ski area, the bus ride home, or the hotel.

As Aspen becomes a blur of laughter, empty glasses, and haphazard street crossings, I start learning all sorts of lessons. The most important ones are these:

1.Tables comprised of the same sex are always looking for trouble.

3.Getting forcibly removed from the staff bathroom at Escobar with a new friend is totally worth it.

4.If you’re trying to get away with skinny-dipping after-hours, claim that you’re a lifeguard.

5.If all else fails, go to New York Pizza. If everything is failing, you probably need to eat anyways. 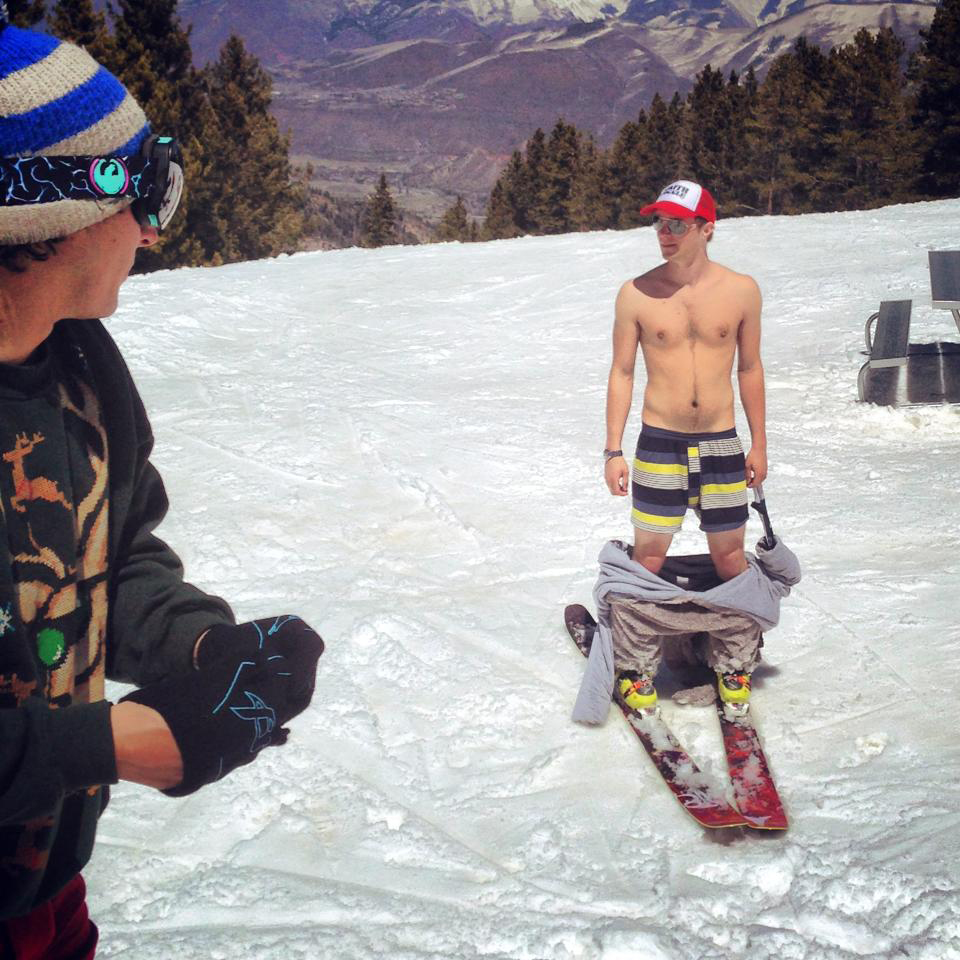 Suddenly the sun is out again and we’re hiking up to the top of Highlands Bowl for the last run of the season. A crowd of locals is gathered to take in the Maroon Bells, sip champagne, and shred the shit out of an incredible late season snowpack one last time. For all the glamour associated with Aspen, the group taking the season’s last run down the bowl shows none of it. It’s just skiers and smiles. Every turn puts us further from the season. Despite the fact that I haven’t slept in two days the snow is so good and the runs are so steep I have one of my best runs of the season.

I slide sideways into the base area in a spray of snow, thoroughly used up, totally worn out. Ski season—what a ride. 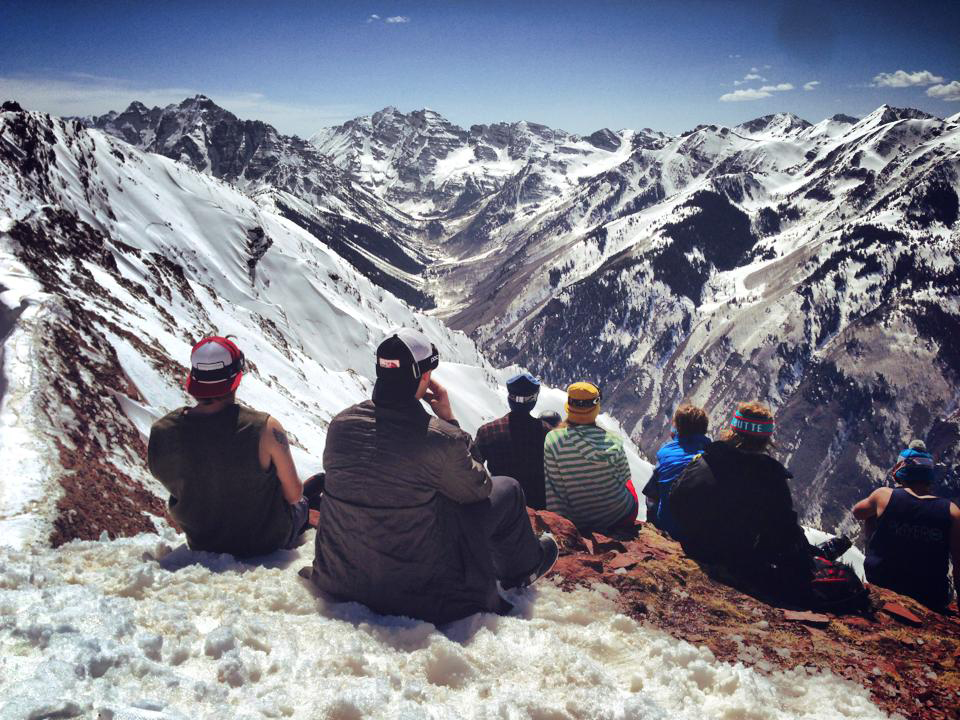