Bryan Iguchi Translates an Awe for The Outdoors into Art 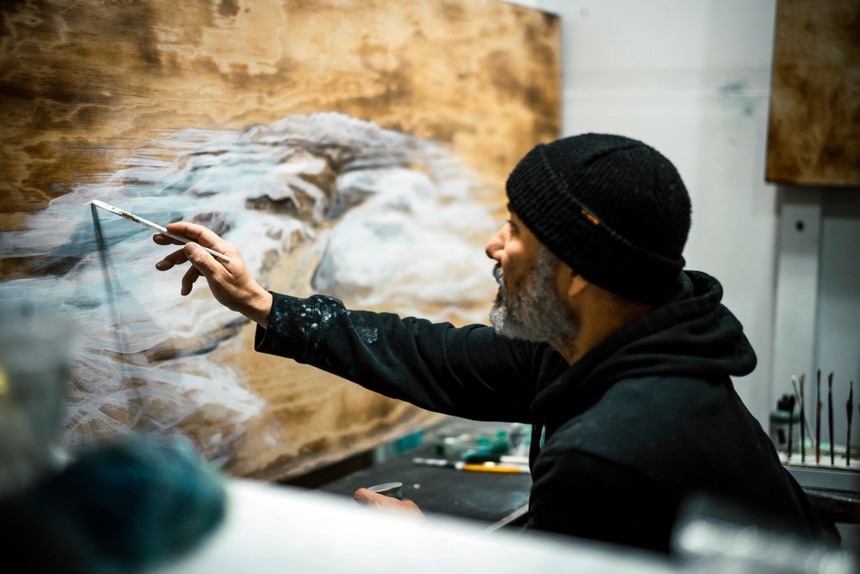 Painting for the snowboarding legend is no different really from riding waves or powder. In the end, it's all about interpreting the landscape. Wade Dustan Photo.

The odometer steadily ticked upward. At this point, the 1000-mile drive from Laguna Beach, California, to Jackson, Wyoming, had become the norm for snowboarder Bryan Iguchi. It was a seasonal migration that had him leaving California’s swells for fresh snow tucked away in Wyoming’s jagged peaks.

Settling into a natural rhythm, Iguchi’s thoughts drifted from the road to the natural beauty passing by him. The landscape was constantly evolving. Vast open deserts morphed into canyons, which would soon become expansive mountain ranges. When isolated, all these spaces felt unique and different from each other, but when compiled together he noticed a common thread connecting them all: water.

RELATED: The Unfound — The Legend of Bryan Iguchi

Iguchi’s connection with water began with the ocean. Watching surfers at Ventura Point as a kid was the first moment he recalls feeling a powerful sense of awe from nature. He’d later take up the sport, and over time track the swells and storms that dictated the surf. Snowboarding, which didn’t come until years later, was a perfect translation of this same process.

Now unable to shake these observations, Iguchi instead found his thoughts formulating into poetry:

Flows through tributaries. Streams into Rivers.

Then finds the sea and returns to the air...

“I have this unstoppable passion to tap into this energy, and to this day it’s taught me so much,” he explains. 22 years after he formulated this prose, Iguchi is now catching his breath, hanging his second painting exhibition at the Teton County Library’s Mountain Story Gathering. That hydrological process, originally a fascination, is now brought to life through a body of work known as Entrenched Meanderings. 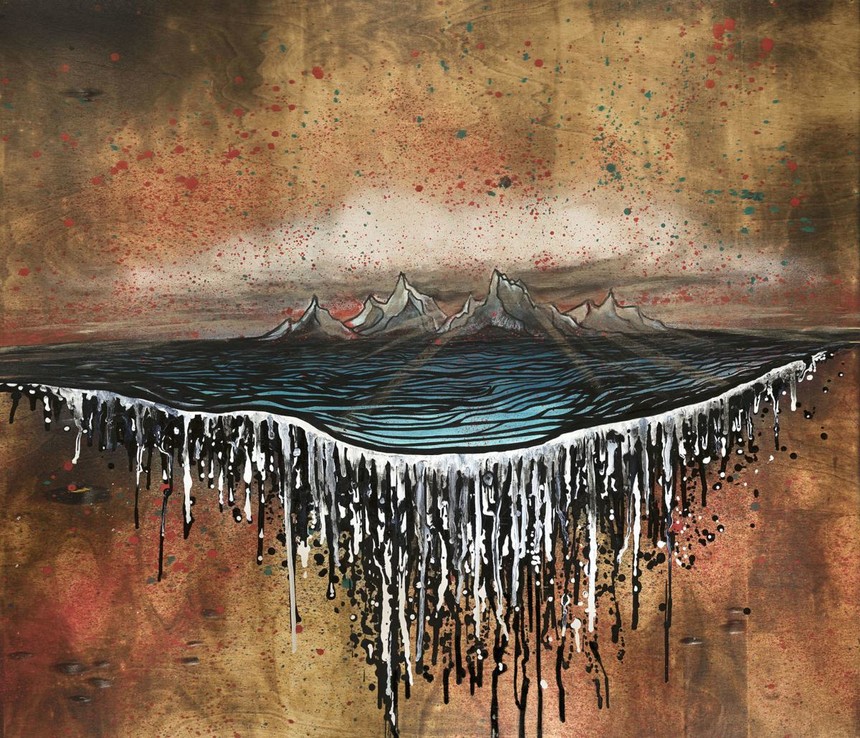 Frame of Mind, the final piece of the show, is an imaginative scene exploring the interconnections of the hydrological cycle. Bryan Iguchi Art.

Despite the stress between the show, responsibilities from his snowboarding career, and being a father to two energetic boys, he remains in rather high spirits. In fact, he found the pressure to be a healthy push.

“It was perfect timing as far as my creative vision,” Iguchi says. If anything this show brought him back into a much needed creative flow.

While Iguchi’s creativity ebbed and flowed through the years, art has always been something he’s treasured. Opting for art classes whenever he could in school, he was eager to learn as a kid. But the real push would come from friend and fellow painter Mike Parillo. The two self-taught artists became roommates after high school and established a productive creative rhythm, which permeated into more than just their art. During the day Parillo would sculpt snowboard parks, so Iguchi could test the features. After a full day on their boards, they’d return home to the canvas.

This balance of snowboarding and painting only heightened when Iguchi went professional in 1992. Adventures and competitions would take him all throughout the world, creating even more inspiration for him to draw from. Iguchi explains:

As far as the creative process, simply looking at mountains and dissecting them to snowboard, I think it takes a lot of visualization.

Having analyzed topography and terrain his whole career, it has undoubtedly bled into his art. “With visualization in art, it’s a lot of communicating ideas. So it goes hand and hand.”

Eventually craving bigger and bolder mountains, the two packed their things and headed for Jackson, Wyoming, the place Iguchi would permanently call home. Driven by the desire to interpret and ride natural terrain, Iguchi broke boundaries within backcountry snowboarding. His art is simply a byproduct of this lifelong passion. 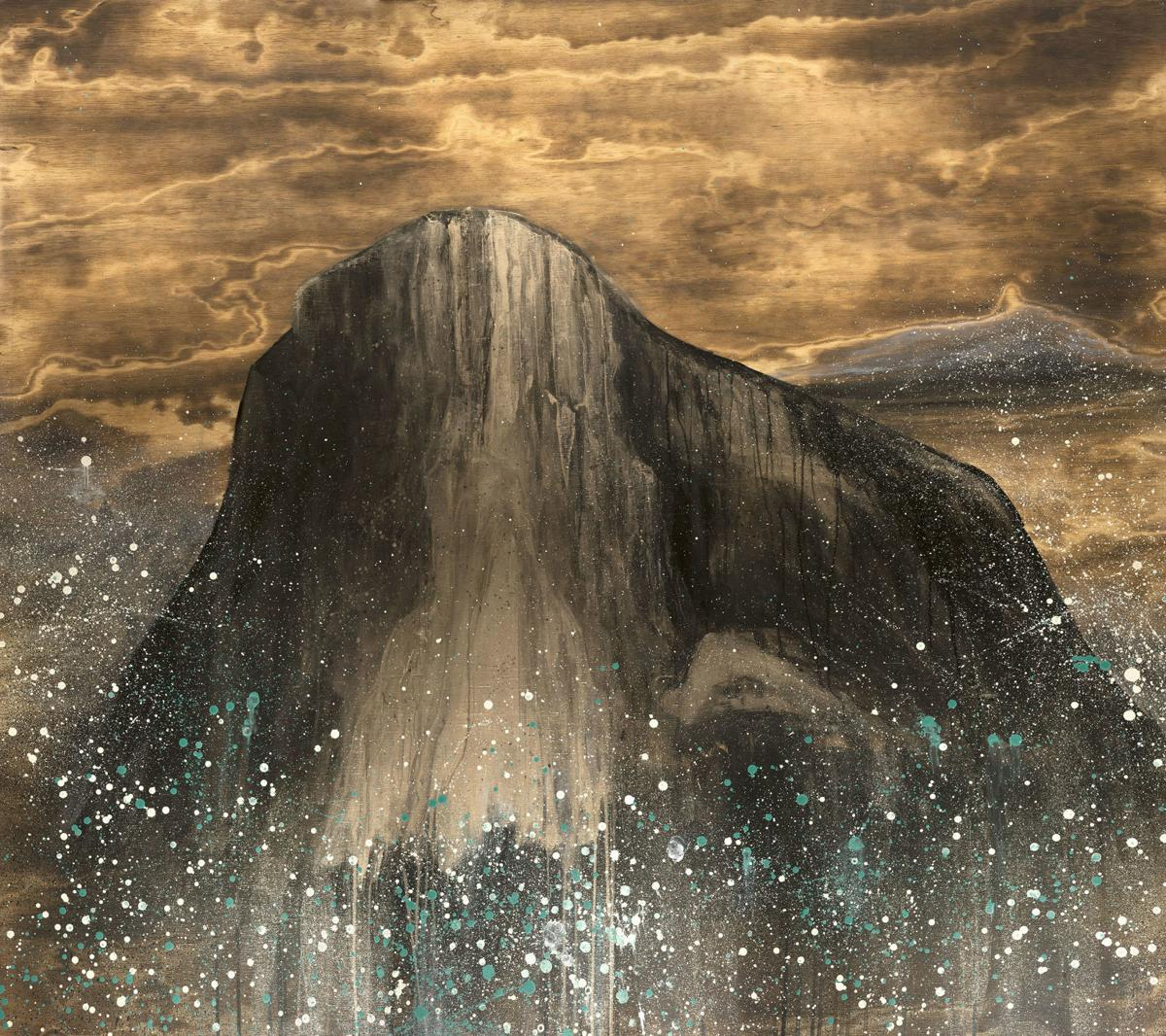 El Capitan is special for Iguchi because when he was a child, Yosemite was his first introduction to the mountains. Bryan Iguchi Art.

“[Art] gives me the same feeling I have about winter coming, it’s exciting. You know? And you just want to be in that state of mind,” he says. “Snowboarding is such a literal physical thing, but with art, it can be a great adventure of your imagination.”

The process behind Iguchi’s work can be at times, chaotic. His paintings are the amalgamation of a unique pairing of mediums: wood burning, spray paint, acrylic, resin, and pencil. Jokingly he explains how it hasn’t always worked out. He says:

Occasionally a few paintings have been sacrificed in order to craft what he’s envisioning—but that’s all part of the fun he argues.

“I realize if I’m a little bit looser and I’m not holding my breath trying to do a perfect brush stroke, I just enjoy the process a bit more,” Iguchi says. This style, similar to his riding, is best when it flows. “These are fluid mediums and it’s fun to get a little messy.” 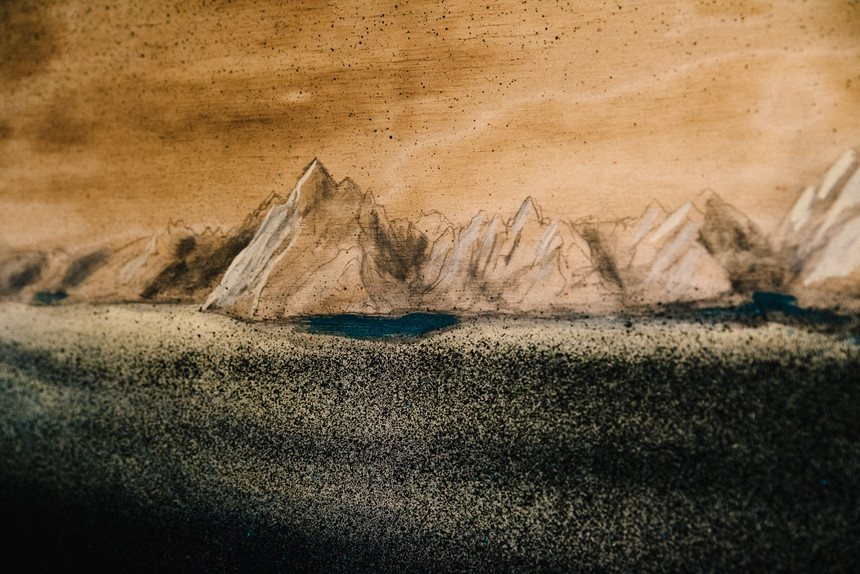 A close up of the painting Baseline. While Iguchi uses a variety of processes to create his work, he is ever so mindful of the details. Bryan Iguchi Art.

Iguchi picked some of these mediums, like the wooden canvases, simply because he enjoys working with them, whereas a few have been influenced by his own personal experiences. He first tinkered with acrylic resin not to create art, but as a way to facilitate surfing. Growing up, his first passion was the ocean, but he couldn’t afford to buy a new surfboard. Instead, he discovered one at a local garage sale for $10. It was perfect, except for a slight problem. It didn’t have any fins. Rather than disregarding it, the crafty 11-year-old saw an opportunity. Thinking on his toes he pulled fins from an old boogie board and sealed the transplants with the resin.

“There’s something inside of me that loves that beautiful clear gloss, it just reminds me of surfboards,” he explains with a big smile and can’t help but be that 11-year-old again when talking about boards. But now miles away from a coastline, Iguchi relishes in those memories by adding resin to his pieces as a finishing touch.

One of his wood burning techniques also holds a special meaning, beyond its rich charcoal aesthetic. It stems from the Japanese process of shou sugi ban, a traditional technique for treating cedar. He first discovered the 18th-century treatment when designing a cover for Jackson Hole Snowboarder Magazine. Iguchi, who is half Japanese, now uses art as one of the means in which he can celebrate and explore his heritage. 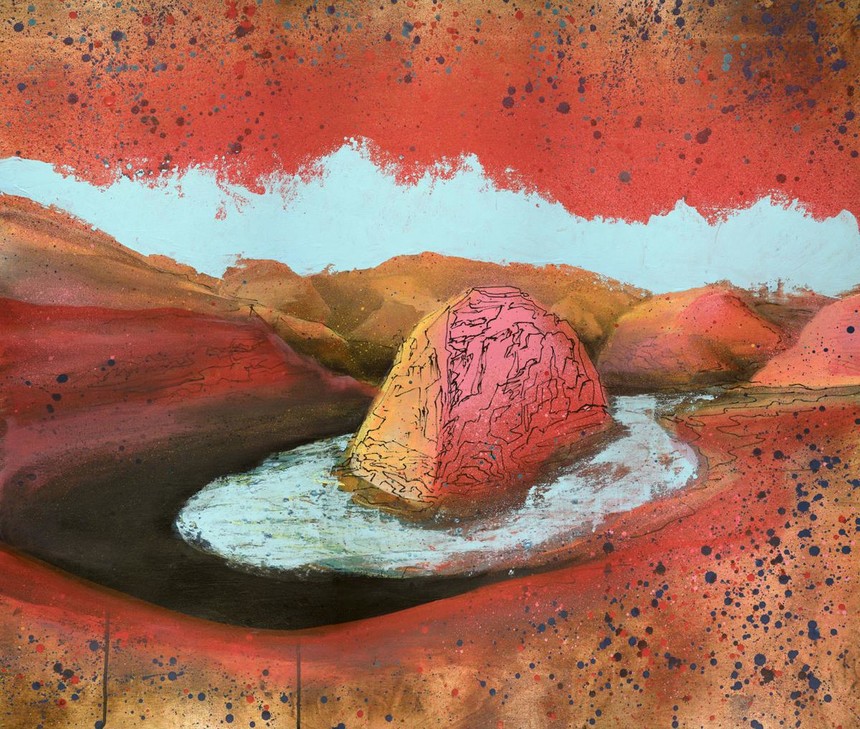 Iguchi was compelled to paint this landscape located in Dinosaur National Monument because it was the birthplace of the environmental movement. Bryan Iguchi Art.

While he’s been painting for the past 20 years, inspiration can be seasonal, much like the snowpack he spends his time in. His main source of creativity has always been the outdoors, but he’s also looked to audiobooks and other artists to spark new ideas. When it comes to particular artists he admires the list is both expansive and diverse. It ranges from fellow community members like Mike Parillo and Jaime Lynn, famous streets artists like Banksy, and even the great surrealist Salvador Dali.

“When I was young I thought that the Persistence of Time was the most genius painting of all time,” he explains. The final piece in his show, Frame of Mind, is a subtle nod to Dali. Instead of clocks, mountains melt into oceans illustrating the persistence of the hydrological cycle. It’s an image he can’t shake from his psyche. “It’s like working on your handwriting, I’m sure I’ll be working on it for the rest of my life,” he says with a laugh.

The Teton County Library’s gallery is buzzing and the crowd nearly makes it impossible to see Iguchi’s artwork on the walls. Locals mingle with athletes like Mark Carter and Michelle Parker who are sprinkled throughout the moving body of people.

Reflecting on the show days later, the Library’s Adult Program Coordinator and mastermind behind the event Leah Shlachter, was blown away by the turnout. She says:

Mountain Story has usually displayed the work of outdoor photographers, but Iguchi’s paintings were a natural choice to integrate fine art into the event. With a diversity of scenes ranging from Wyoming-esque ranges, Yosemite’s El Capitan, to Echo Park in Colorado, there was sure to a be a painting that the outdoor community could resonate with. 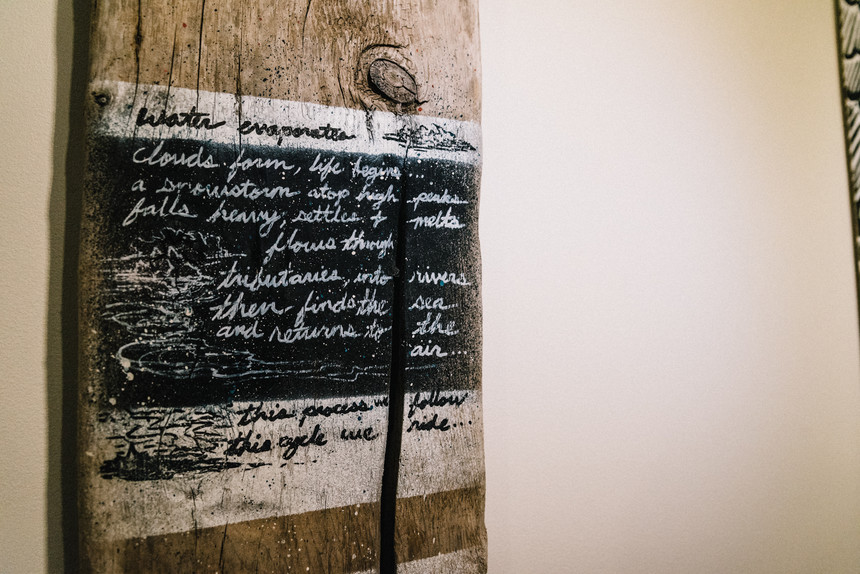 Driftwood by Bryan Iguchi. Shaped by the Snake River's waters, this piece of wood felt like a primitive board to the artist. Bryan Iguchi Art.

Before getting to the bigger pieces, the show begins with the most unique piece of the collection. It looks like a small battered snowboard hung between two paintings. Except upon closer inspection, you realize it’s not actually old board, rather it’s a piece of driftwood. Canoeing down the Snake River one summer, Iguchi spotted it and was quickly intrigued. “It instantly grabbed my imagination. In a perfect world I could ride this thing in the river, sea, or snow like a primitive board,” Iguchi explains.

Plucked from the water it’s no longer a vessel, but a piece to set the tone of the show. On it, painted in delicate cursive, is the same poem from 22 years ago. Those words are no longer ideas bouncing around Iguchi’s head, but the catalyst for an illustrative body of work.