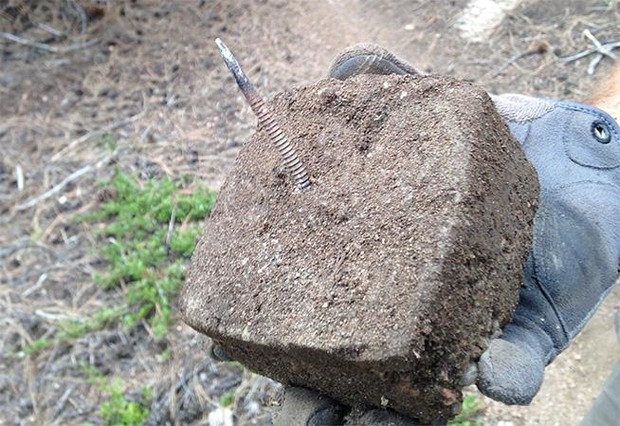 One of the anti-mountain bike devices found on the trail. Denver Post photo.

Mountain bikers in Colorado have discovered what they think is an intentional attempt to sabotage riders in the area. According to the Denver Post, Tim Fishback and Nick Kostecki were riding the Little Scraggy Trail in the Buffalo Creek network when they experienced multiple flat tires in a relatively smooth section of trail. When they went to investigate they discovered multiple nails sticking out of the ground.

When they tried to remove the obstruction the discovered a 3-inch nail that had been set in a brick. In a mile section of trail they found three of these apparent anti-mountain bike traps.

"I've never seen anything like it. Someone manufactured these things. It took some effort to dig those holes and put those in there and they were spaced out a good bit. Somebody was trying to do some real harm and they were targeting bikers," said Fishback to the Denver Post. "That's the craziest thing. Mountain bikers built that trail. I rarely see anyone but mountain bikers on that trail."

The area in where the nails were discovered was built with over 1,000 hours of volunteer labor, which helped create the nine-mile Little Scraggy Loop. This was the result of a healthy, on-going partnership between the bike community and the Forest Service.

Conflict between mountain bikers and other outdoor enthusiasts is nothing new. More recently Marin County started to issue speeding tickets to riders who exceed 15 mph, after community members complained.