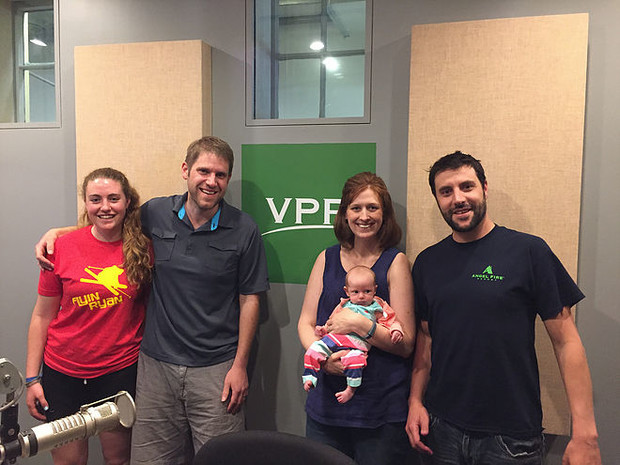 This past March, an enthusiast and aspiring backcountry skier from Vermont named Jon Miller drove the car south towards New Hampshire's Mount Washington, home of the most hallowed backcountry ski terrain in New England. He and a few friends were navigating down the 40º pitches of Hillman's Highway, just downhill of Tuckerman Ravine, when Miller slipped on a patch in a narrow crux that had turned from easy slush to refrozen shit refrozen from slush in the afternoon spring shade. Helplessly trying to dig into the slope, Miller instead fell onto water ice and tumbled almost 1,000 feet almost to the bottom of Hillmans'.

When his friends made their way to him after ten minutes of perilous tip-toeing down the frozen run, Miller was found to have suffered a traumatic brain injury, broken ribs, broken shoulder, a nose fracture, a fracture in his temple, and punctured a lung. Miller spent the following month in the hospital, and suffered two weeks of memory loss in the process. Alex Kaufman from the Wintry Mix podcast goes into the details of the harrowing story below:

A native Marylander, Miller had turned backcountry skiing in the Northeast into his life's biggest passion behind his family, and had advanced to progressively more advanced backcountry terrain in the Northeast since moving to Vermont several years ago. Before the crazy fall, his party had been skiing awesome corn in the Gulf of Slides. But Hillman's Highway was noticeably narrower thanks to the low east coast snow year, introducing sketchy choke points that wouldn't exist during a normal snow year. 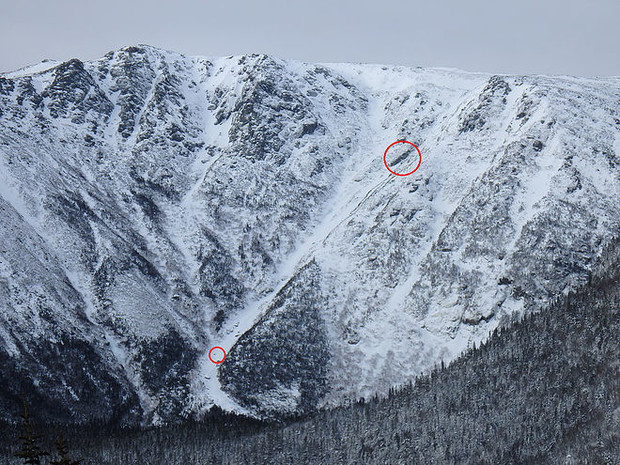 This picture depicts where Miller lost control, and where he ended up. Yeesh. Mt. Washington Avalanche Center photo.

Miller's GoPro had fallen off his head, and another member of the East Coast backcountry community managed to find out whose it was and return the footage to Miller. When Miller saw it first, he started sweating and actually having a visceral reaction to the footage, which he watched almost immediately after returning home after being in the hospital against his doctor's orders. 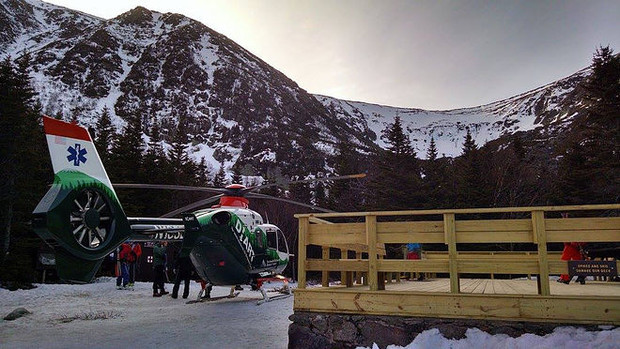 The life flight chopper managed to land in the impossibly tight space right next to the deck at Hojo's. Mt. Washington Avalanche Center photo.

Lots of Gofundme donations poured in following the news of Jon's awful fall, accumulating to some $60,000, which Miller will use to pay off his sizable medical debt. He still claims he'll head back on skis, and even into the backcountry, but his risk versus reward equation has forever changed.

Video courtesy of Dogy Down Productions.