Following Nasty Four-Year Battle, Why Squaw Valley Will Not Become Its Own Town 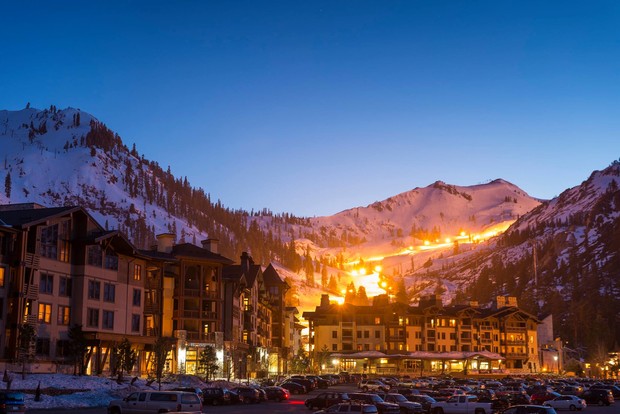 This week, the community group fighting to incorporate the residents around Squaw Valley withdrew its application. Squaw Valley photo.

UPDATED 12/5/2015, 8:30 AM MST: Four years of political agony in the North Lake Tahoe region came to an end this week when Incorporate Olympic Valley, an organization founded with the goal of incorporating the area at the foot of Squaw Valley into a new town, thus being able to exert more local control over the valley goings-on as the new owner of Squaw Valley sought to undertake a 25-year expansion that would create a monstrous new base village 10 times the size of the existing one, threw in the towel. IOV withdrew their application for a new town following a report from a consultant to the county agency that determines the viability of new towns, which stated, in somewhat confusing terms, that the town would not be financially viable. 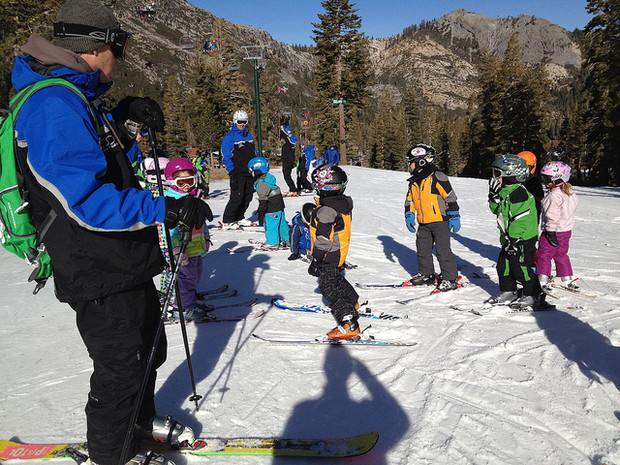 The political fight that ensued in North Lake Tahoe came amidst four years of drought that robbed the Sierras of their normal snowpack... and business. Ryan Dunfee photo.

Squaw Valley Ski Holding’s controversial CEO, Andy Wirth, who has been at the center of the debate over both the ski area’s development and the resulting incorporation effort, even ended up in the hospital for 50 days in 2013, nearly losing his right arm following a skydiving accident. Just this October, Brian Sheehan, a part-time Squaw Valley resident and county commissioner who IOV believed was a critical potential supporter, passed away.

It Began With a base Village 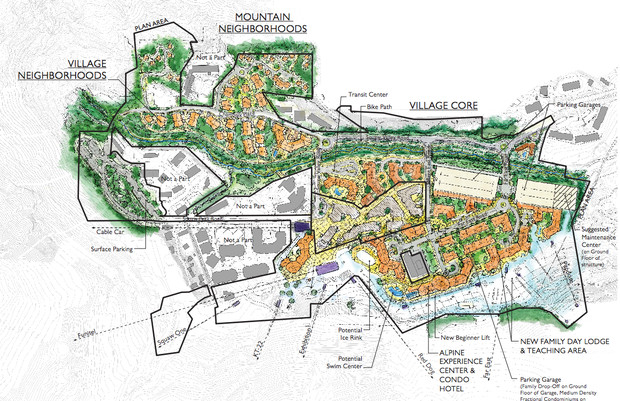 The original base village proposal was over 100 acres and included an indoor waterpark. Squaw Valley rendering.

The political battle began back in 2011, when, following the sale of family-owned Squaw Valley to KSL Capital Partners, a private equity firm that specializes in golf courses and spas, the ski area proposed a massive, 25-year, 106-acre expansion project that would add 1,300 hotel and condo units, 29,000 square feet of commercial and retail space, and even a 132,000 square foot indoor water park which would stand 108 feet tall. Much of the project would overtake the existing day skier parking lot.

Many locals protested with vitriol, aghast that the huge project would bring year after year of construction, strain already stressed water resources (the plan even considered pumping in water from an aquifer a 17-mile drive away), axe popular day skier amenities like free parking and locker rooms, add unbearable traffic loads to the single-lane Highway 89 that accesses the valley, and destroy the character of the valley. 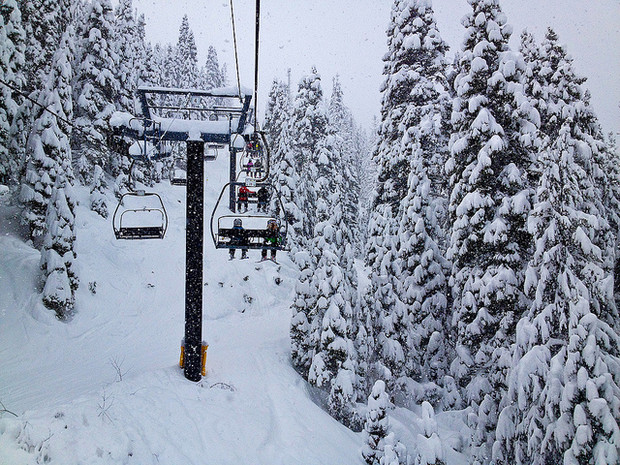 Incorporate Olympic Valley sought to exercise more control over the base village development by incorporating a new town at the base of Squaw Valley. Ryan Dunfee photo.

Several of the more politically-minded opponents to the project then began an effort to incorporate the unincorporated Olympic Valley, with the hope that an established town would be able to exercise more control over KSL’s plans, instead of leaving the approval process to be handled by Placer County officials far afield in Auburn. While Olympic Valley and neighboring Alpine Meadows only had 859 full-time residents, occupancy and property taxes from the two valleys amounted to $13 million a year–more than enough, supporters argued, to support a new town.

The years that followed–which were frustratingly plagued by back-to-back droughts–saw a divide deepen in the small mountain community between supporters of the incorporation effort–which became the group Incorporate Olympic Valley–and those siding with the ski area, who plainly did not want a new group of town officials imposing control and restraint on their development plans, and who argued that the creation of a new town with such a small population and wholly dependent on the ski area for revenue would financially disastrous.

The status quo, many argued, with a competent Placer County in charge and a receptive Squaw Valley Ski Holdings willing to work with the community, were working fine. Save Olympic Valley, a political action committee started and funded by Squaw Valley, became the formal voice for that group. 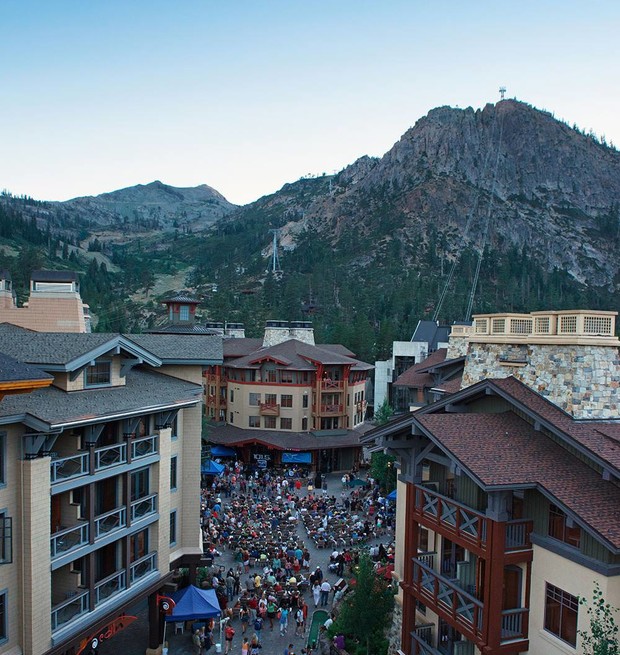 While some of the more controversial elements of the initial base village plan were removed, reception to the plans remained mixed. Squaw Valley photo.

An environmental impact statement forsaw significant and unavoidable impacts to the valley’s ecosystem. The plan changed in size in response to the community’s input. A proposed mountain roller coaster was dropped. A design review committee was founded to review and at times modify elements of the base village plan with input from community members.

A new gondola was proposed to connect Squaw Valley to its sister resort, Alpine Meadows, over private land that had long remained a hold out to Squaw’s plans, as well as federal land that may or may not be wilderness. Environmental groups continued to spit fire at Squaw Valley’s plans, with Sierra Watch winning the Shakespearean award for the most creative criticism, calling the base village plan a combination of “North Korean severity, Vegas excess, and Disney surrealism.”

A Town That Would, If It Could 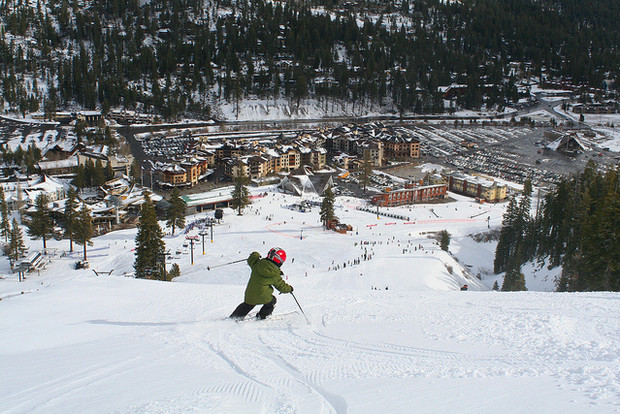 A preliminary fiscal analysis found the potential new town was not fiscally viable, but proponents claimed inaccuracies in the report. Ryan Dunfee photo.

A preliminary fiscal analysis found the potential new town wasn’t realistic, and that both the town and the county would be at risk of losing money if shitty winters and poor economic conditions meant the town’s only revenue source–the ski area–wasn’t selling as many lift tickets, hamburgers, and hotel rooms as expected. Meanwhile, Squaw Valley and a few other area businesses requested exclusion from the potential new town, requesting that the county consider a second proposal for incorporation that excluded them. The county denied that idea.

Incorporate Olympic Valley protested, asking the state to independently review the findings. Releasing their findings this past November, the state found significant errors with the initial report, reversing 18 different conclusions in the fiscal analysis. While Squaw Valley proclaimed that the key findings of the initial analysis were left intact, IOV was ecstatic, believing that the findings instead supported incorporation, and began moving ahead with putting together its environmental impact report. Opinions differed wildly on which way the revised fiscal analysis pointed, and even initially the county commission’s executive director didn’t know what to make of it.

Despite a staff report recommending that the county’s incorporation commission move ahead with revenue neutrality negotiations with the county, and an environmental impact report at their own expense, the commission voted in a November 18th meeting to deny IOV approval for their proposal. This week, following the decision, IOV formally withdrew their proposal.

The Politics Of Creating a New Ski Town 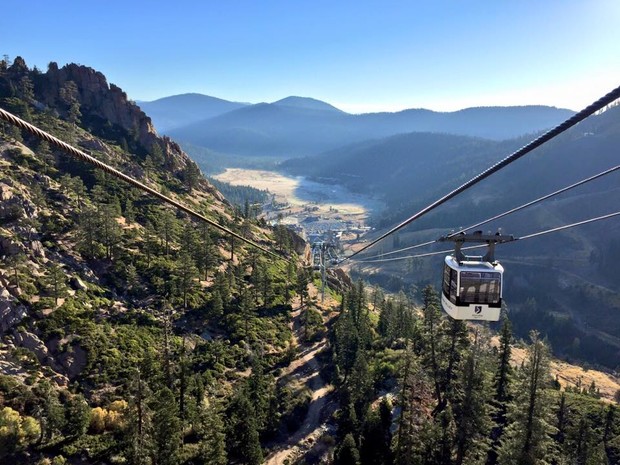 At the end of the day, a new town will not form in the valley below. Squaw Valley photo.

IOV complained publicly that the commission was not acting as a neutral body, since the county stood to lose a lot of tax revenue to the new town. “We couldn’t go on with a referee who was supposed to be neutral but was not being neutral and who was supporting a financial consultant that made error after error,” IOV’s Dr. Fred Ilfeld said in an article in Moonshine Ink, a statement county officials disagreed with strongly.

Meanwhile, Squaw Valley Ski Holdings simply outspent Incorporate Olympic Valley, dumping $800,000 into political and marketing efforts to fight the incorporation effort through their own organization, Save Olympic Valley, whose opposition stance maintained that the new town would be both civically divisive and financially and operationally disastrous. SOV also gave formal voice to the local residents and business owners who thought there were better ways to mold the future of the base village project than incorporation, or who thought the proposal a potential disaster due to financial, management, and civic reasons.

Meanwhile, IOV put together $75,000 to spend on political marketing, while spending $500,00 the legal process, including consultants, a fiscal analysis.

While Andy Wirth maintains that while Squaw Valley outspent IOV's $575,000 effort, he defended Squaw's expenditures as necessary because, in his opinion, IOV's proposal constituted “…a strategic threat to the community and our company. What was being proposed was not in anyone’s interests.” 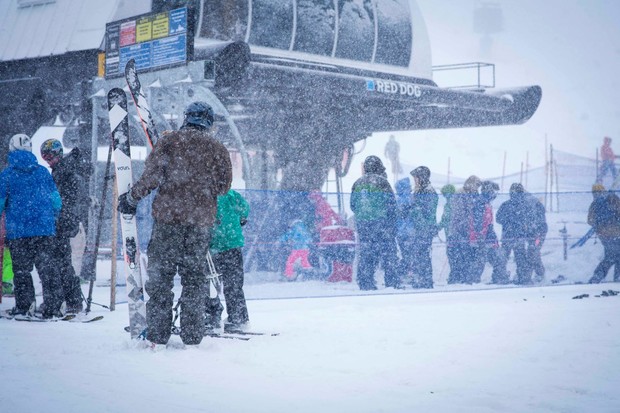 Will a hopeful start to the season drown old animosities? Squaw Valley photo.

While the incorporation movement is no longer, Incorporate Olympic Valley, along with other groups like Friends of Squaw Valley and Keep Squaw True, will purportedly continue to work towards what they consider a more equal vision and realization of the future of one of California mountain culture’s most treasured valleys–one in which financial viability of the ski area remains in a more equal balance with the environmental qualities and the character of the area.

They hope they're successful. Meanwhile, promising early-season snowfall may help repair the contentious divide in this small community built over four years of bitter and passionate infighting.