The Ruby Mountains in Northern Nevada weren't always packed with sleds, and the lot of cars full of folks looking to draw their line down Terminal Cancer.

Even prior to Carl Fischer's proposal in 1976 to the U.S. Forest Service to allow what has become one of the most respected Heli Operations in the U.S. (Ruby Mountain Heli), pioneers were setting out to discover and develop the area into a useful place where people can enjoy of one of the best things that Mother Nature has been able to provide us.

An article published in the Elko Daily Free Press recalls a "...makeshift ski facility set up at the mouth of Lamoille Canyon in the late 1940s." And, as it appears in the article, there were several attempts at developing different areas in the Ruby Mountains as ski destinations. However, while the article noted the attempt to construct a poma lift in the Talbot Creek area, the article was silent regarding a particular Ski Resort that existed in the Ruby Mountains nearly 20 years prior to the attempts in the 1970's - an area that my Dad swore existed as a developing ski area - but was later "Forgotten."

I heard the story about this "Forgotten" Ski Resort several times growing up, but only from my Dad. He was born and raised in the Elko area, but appreciated skiing about as much as a kick in the shins.

In another discussion with him shortly after my wife and I had our son, Henrik Alosa Bogdon, he continued to reiterate that there once was a "Forgotten" Ski Resort, complete with lodge, in the Ruby Mountains.

I had asked a few of the local historians, and other relatives, regarding the existence of this supposedly "Forgotten" Ski Resort. However, what beta I did get from them suggested that the title to this story may have been more appropriately titled, "Non-existent - a story about wasting time..."

That is until I stumbled on this gem. 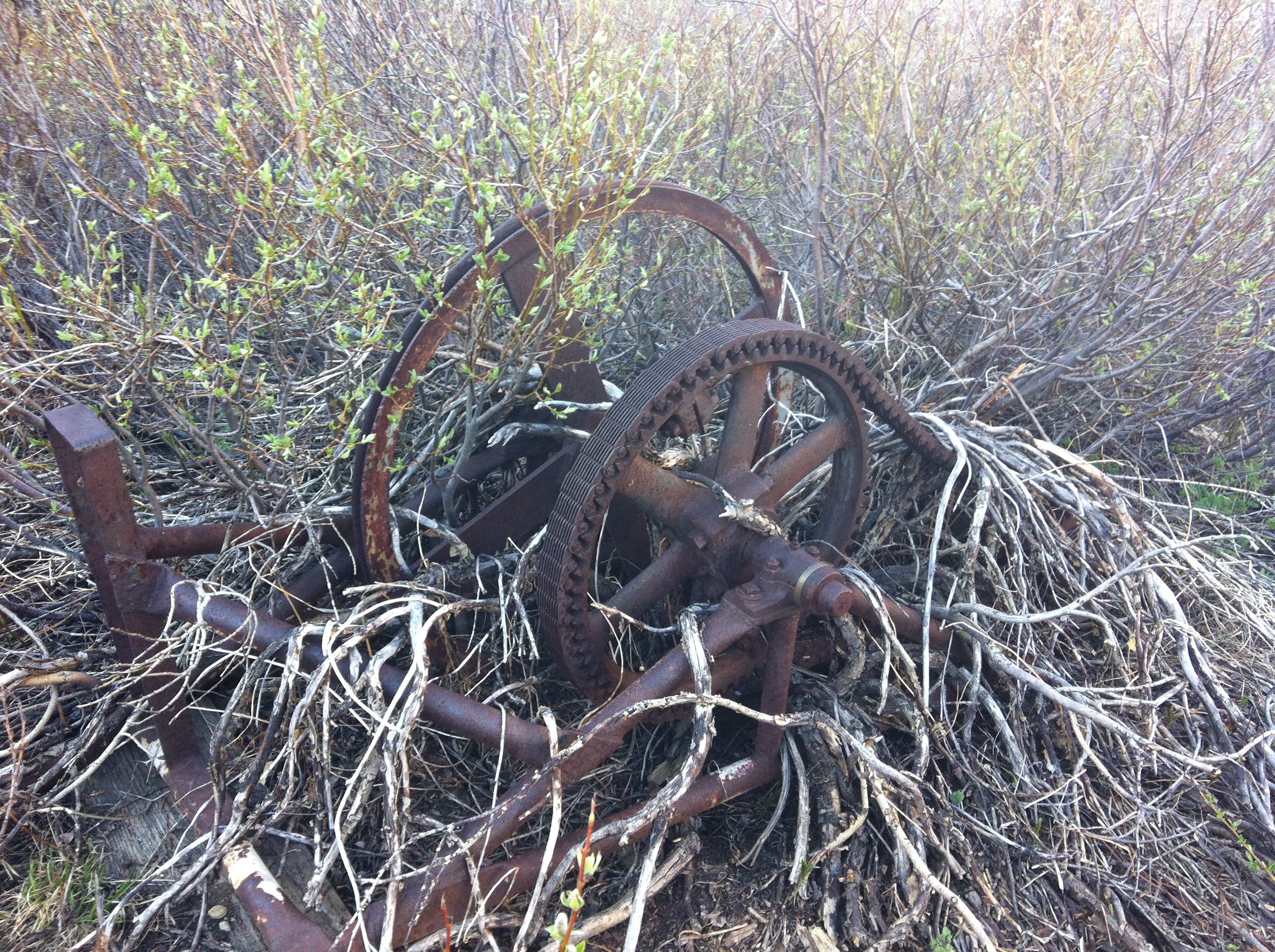 Prior to the find (above), discussions with several experts in the area - who were very familiar with the terrain - turned up nothing but awkward looks when asked about the existence of a "Forgotten" Ski Resort and a ski lodge in the Ruby Mountains. Even George Boucher, who recalled the makeshift ski facility at the base of the "canyon," Forest Service and BLM employees, and other historians had strong doubts that a ski area ever existed up there. However, after locating some other parts to the ski tow, and showing those photos to Mr. Boucher (Former Elko County Manager, ret. 2001 who has a background in Engineering), it was his impression that the rubber wheel (below) was too recent to be associated with the "flume" that was used to divert water to a power station that operated at the base of the Canyon.

As I researched the topic more, it seemed there has been a lot of focus on other industrial activities that took place in the Ruby Mountains (primarily the Elko-Lamoille Power Company), with little interest in the ski industry. It seems that these activities diverted a lot of historical attention from the role that the Ruby Mountains has played in the developing ski industry, and maybe more importantly, the efforts that go into developing a ski area, and what a ski resort would have done to help foster economic growth, tourism, and job opportunities in the Elko area. 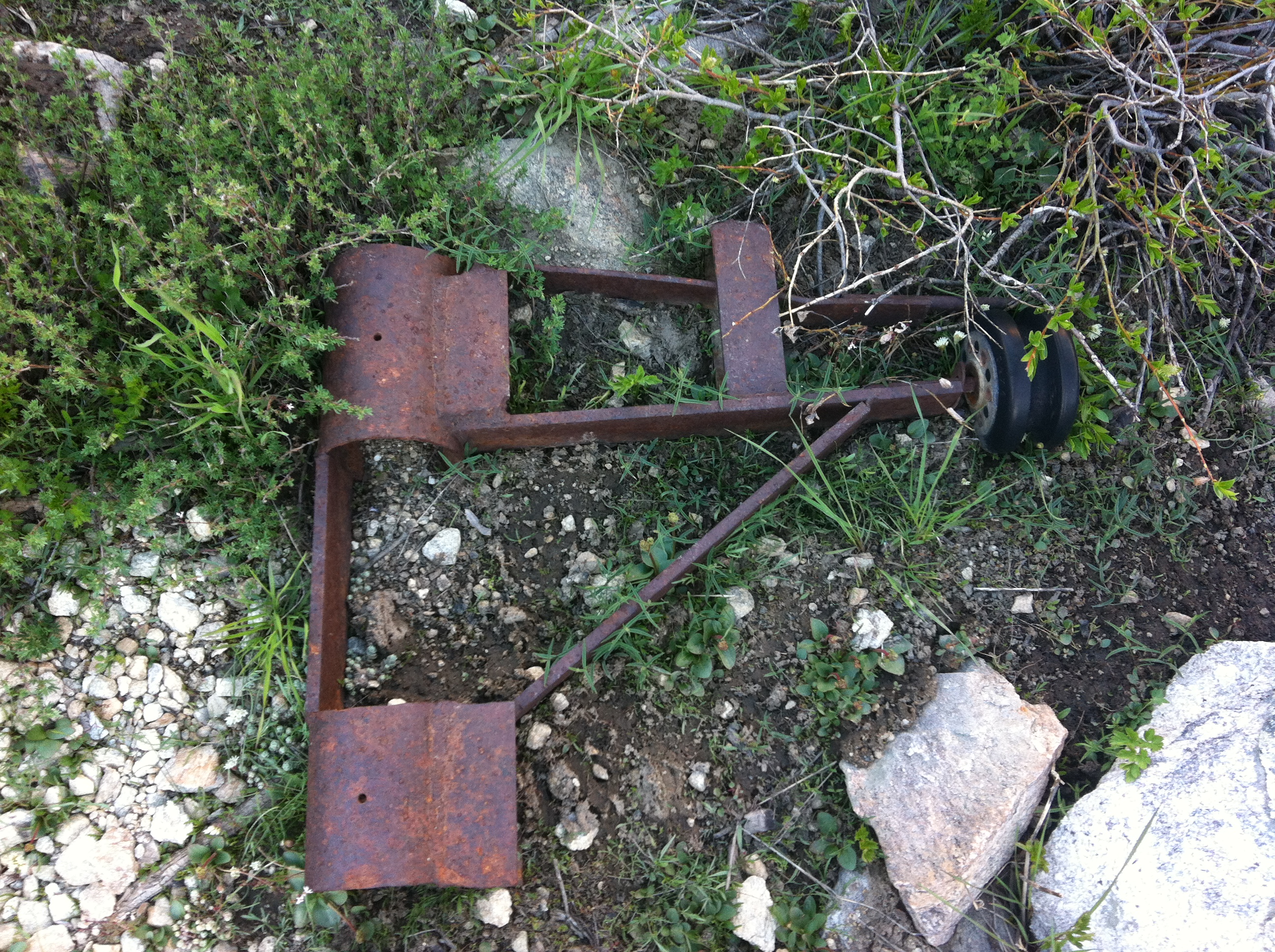 But, rather than giving up hope, and with a truckload of skepticism that my Dad - who is an "anti-winter warrior" for the most part - might still have some sanity left, I took the family to go track down this myth, and an answer to questions surrounding the strength of my Dad's mental faculties.

In my search (which I can't exactly describe as a challenging one), I had discovered: (1) that not everyone so close to us can keep their Bullshit meter red-lined 100% of the time, (2) a rusted-up pile of metal being consumed by nearly a half-century of growth that had taken off once the project was decommissioned by the Forest Service, and (3) something very unexpected.

When I showed up at the Forest Service Office with the photos, the folks were a bit put back, but still a bit skeptical that maybe some of the "red-lining bullshit meter" had teetered over into my gauge. But, with some help and cooperation from the Forest Service, primarily Chimalis Kuehn (Archaeology – Pathways Intern Program, Humboldt-Toiyabe National Forest – NE Zone), I was able to find much more than just the "Forgotten" Ski Resort of the Ruby Mountains.

With the photos I was able to provide Chimalis with, and an understanding that, given the location, the items that were discovered were in a location not compatible with other past electric or mining activities in the area, she must have been able to bargain with her supervisor for some time resources to dig through some files that were still maintained by the Forest Service. Luckily enough, she was able to find a report (circa 1966) from the Lamoille District History which provided some insight regarding the "Forgotten" Ski Resort in the Ruby Mountains (the Special Use Permit dates back to 1955), and 2 other Special Use Permits for a ski resorts; all of which suggest that the Ruby Mountains were destine to have a ski resort. 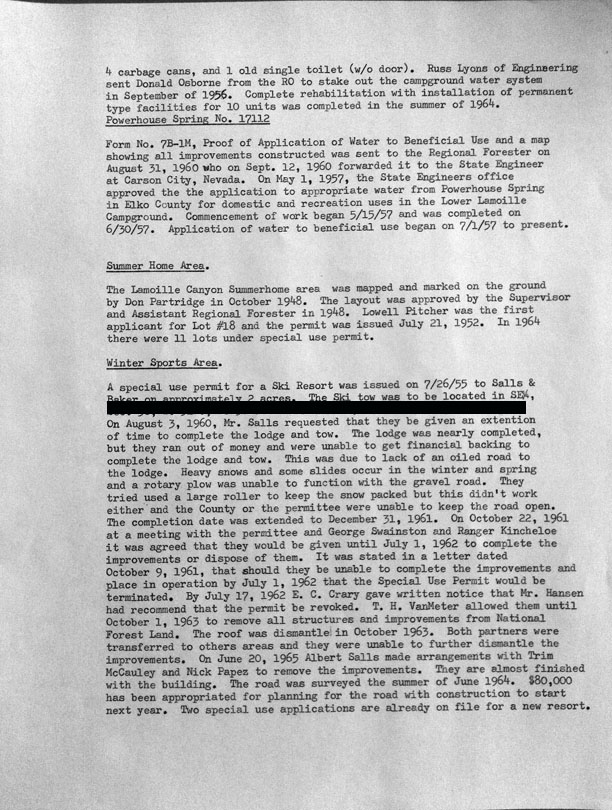 So what happened to the Ski Resort?

Regarding the "Forgotten" Ski Resort in the Ruby Mountains, the report reads as follows:

Another letter to the Forest service was also brought to light during the research into this "Forgotten" Ski Resort by Beth Moore (A.K.A.Vilate Beth Salls Moore). The letter, which was addressed to the Forest Service, also supports the existence of the "Forgotten" Ski Resort in the Ruby Mountains, includes photos of the lodge, and reads as follows:

(The original letter and photos included therein can be viewed here).

The photos that were included in the letter are of the lodge that once sat in the Ruby Mountains, which according to the Forest Service's Report, was dismantled in the mid 1960's. However, apparently, it seems they were unable to remove the ski tow, and left it to be consumed by the landscape and the laws that now protect it from being removed.

Below are the retouched photos of the "Forgotten" ski lodge, which no longer exists. However, with some help from Joe Royer, it seems likely that the logs were re-purposed for residential structures in the town of Lamoille, NV shortly after the lodge was dismantled. 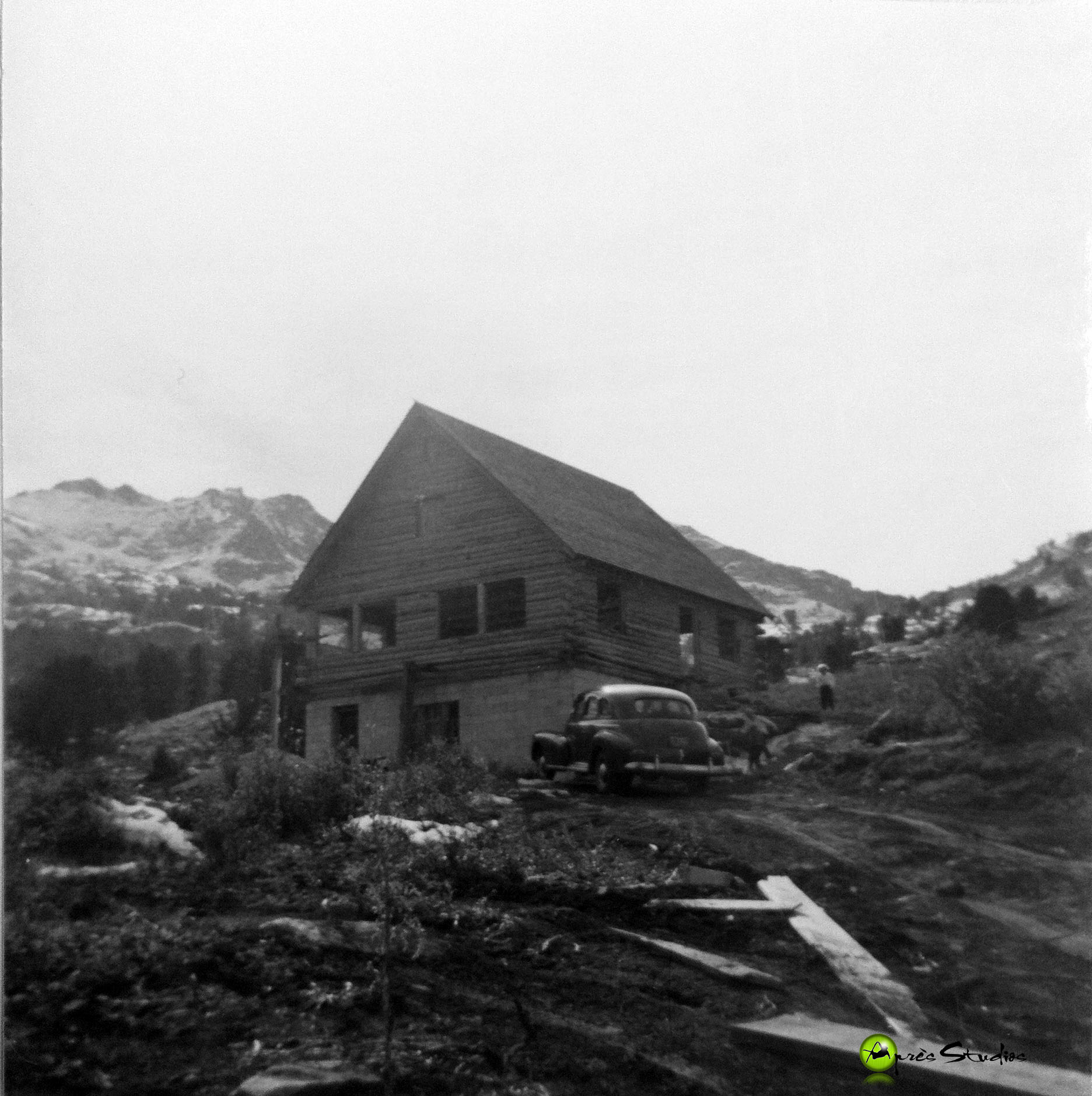 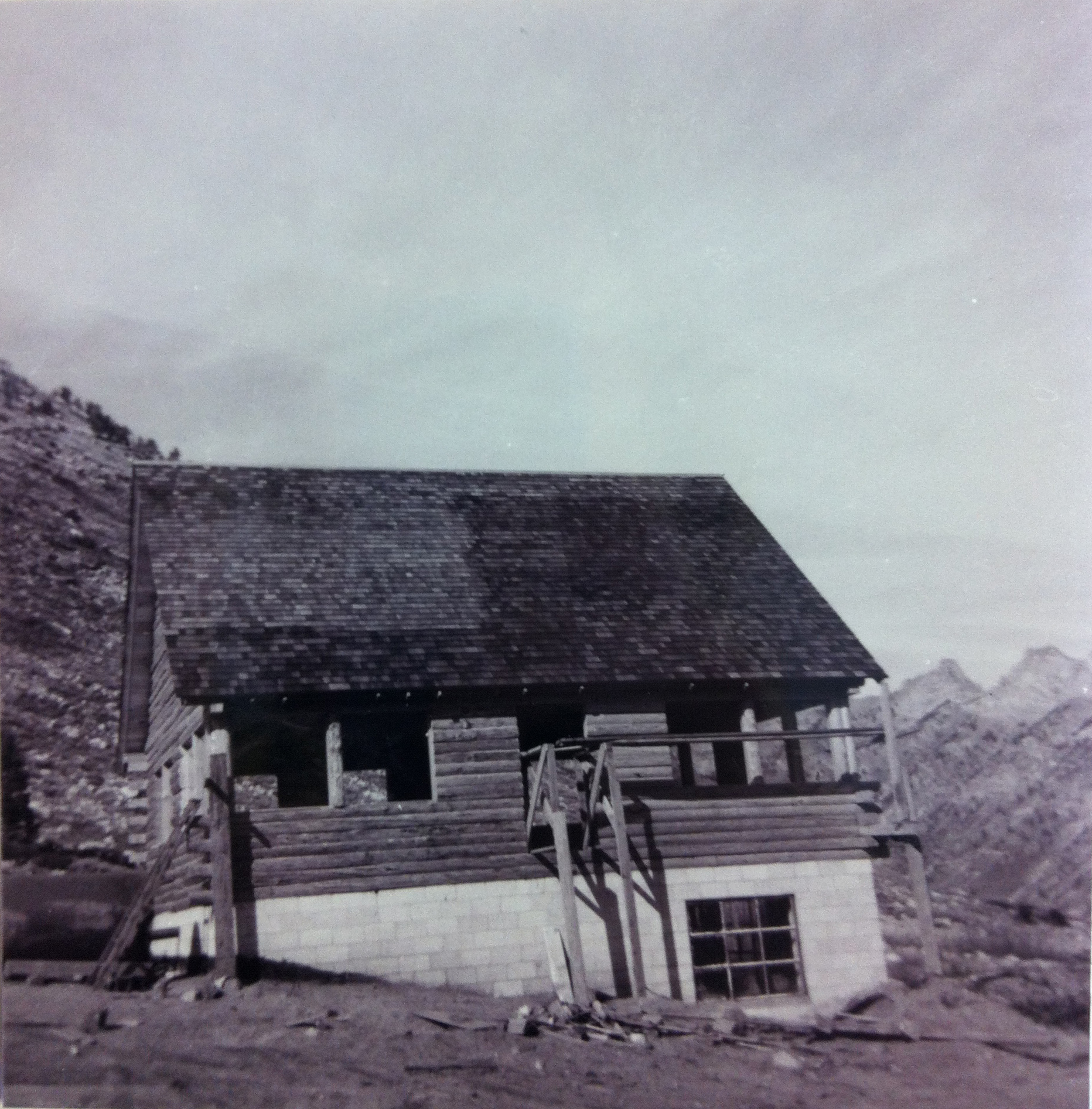 With the information provided in the Forest Service Report, I was able to track down a photo of the ski tow, which I found at the Northeastern Nevada Museum. Although the Director was initially skeptical on the existence of the Ski Resort, the discovery of the photo of the ski tow in the Museum's archives seemed to open her mind to a "zone" that, to her knowledge, never existed. The "Forgotten" Ski Resort that so many people (initially including myself) did not believe existed, was becoming something more than a myth, as evidence began to surface of the special use permits for ski resorts in the Ruby Mountains, photos of the ski tow, the lodge, and of people skiing in the area. 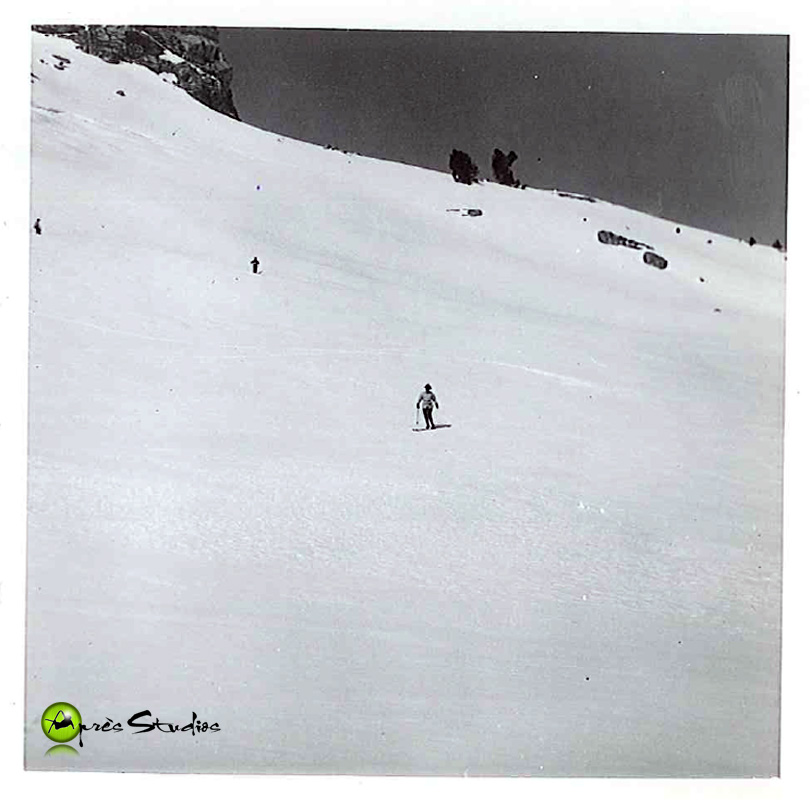 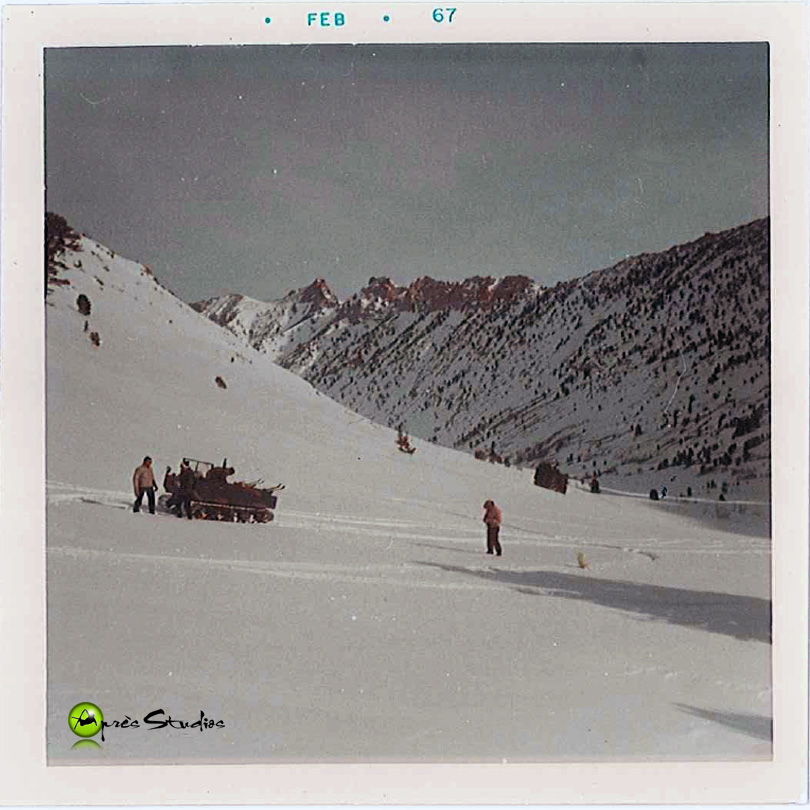 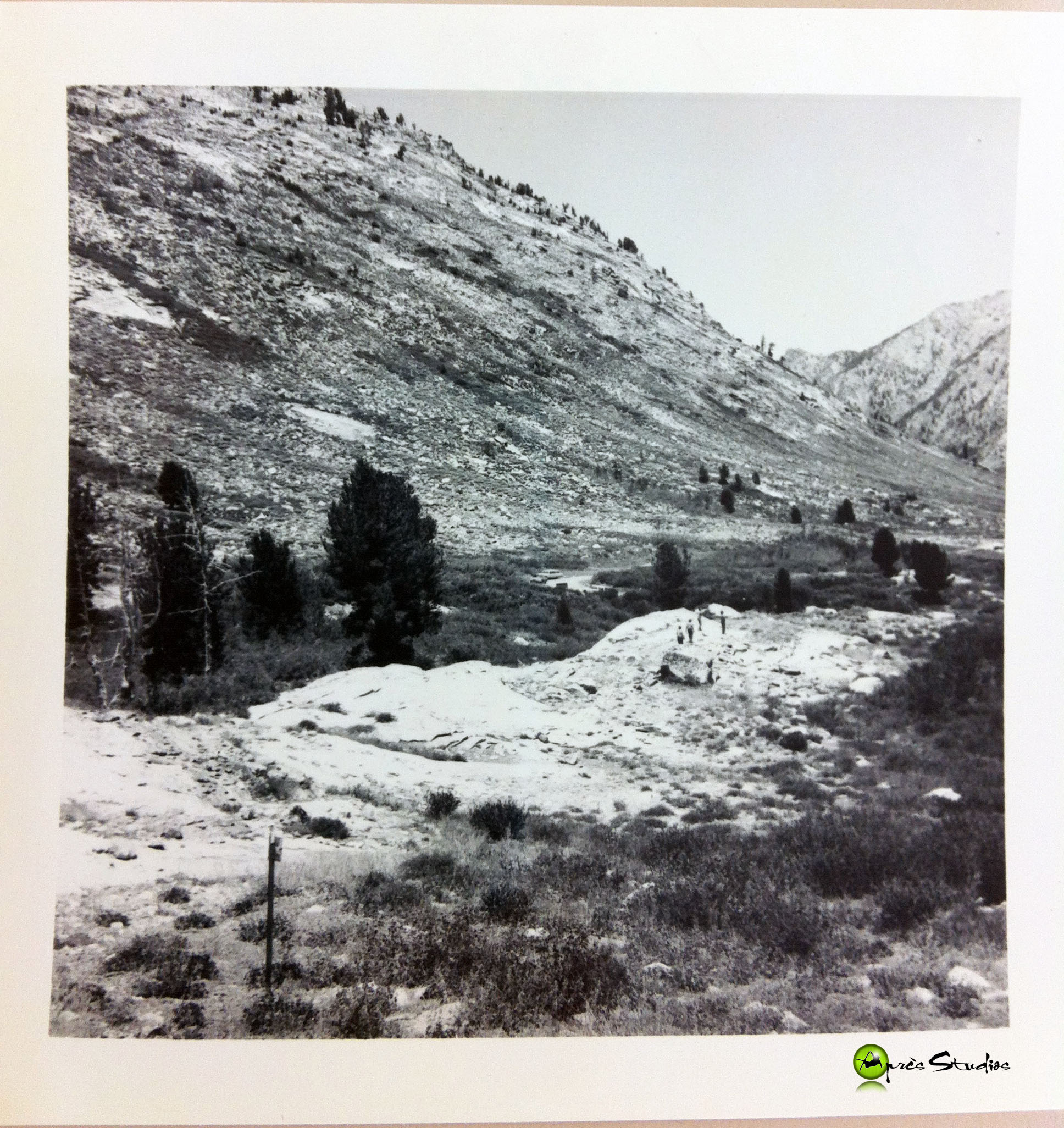 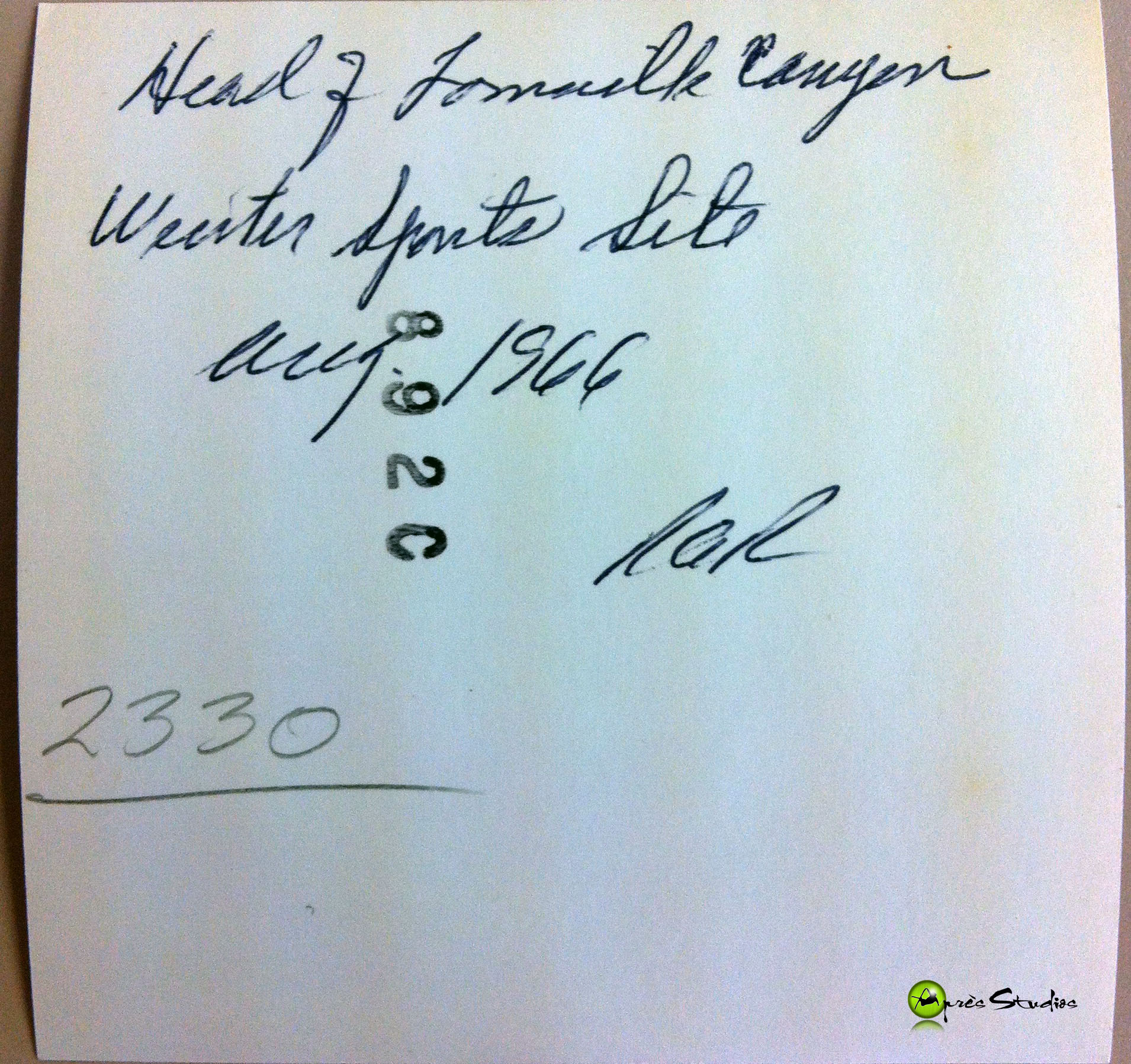 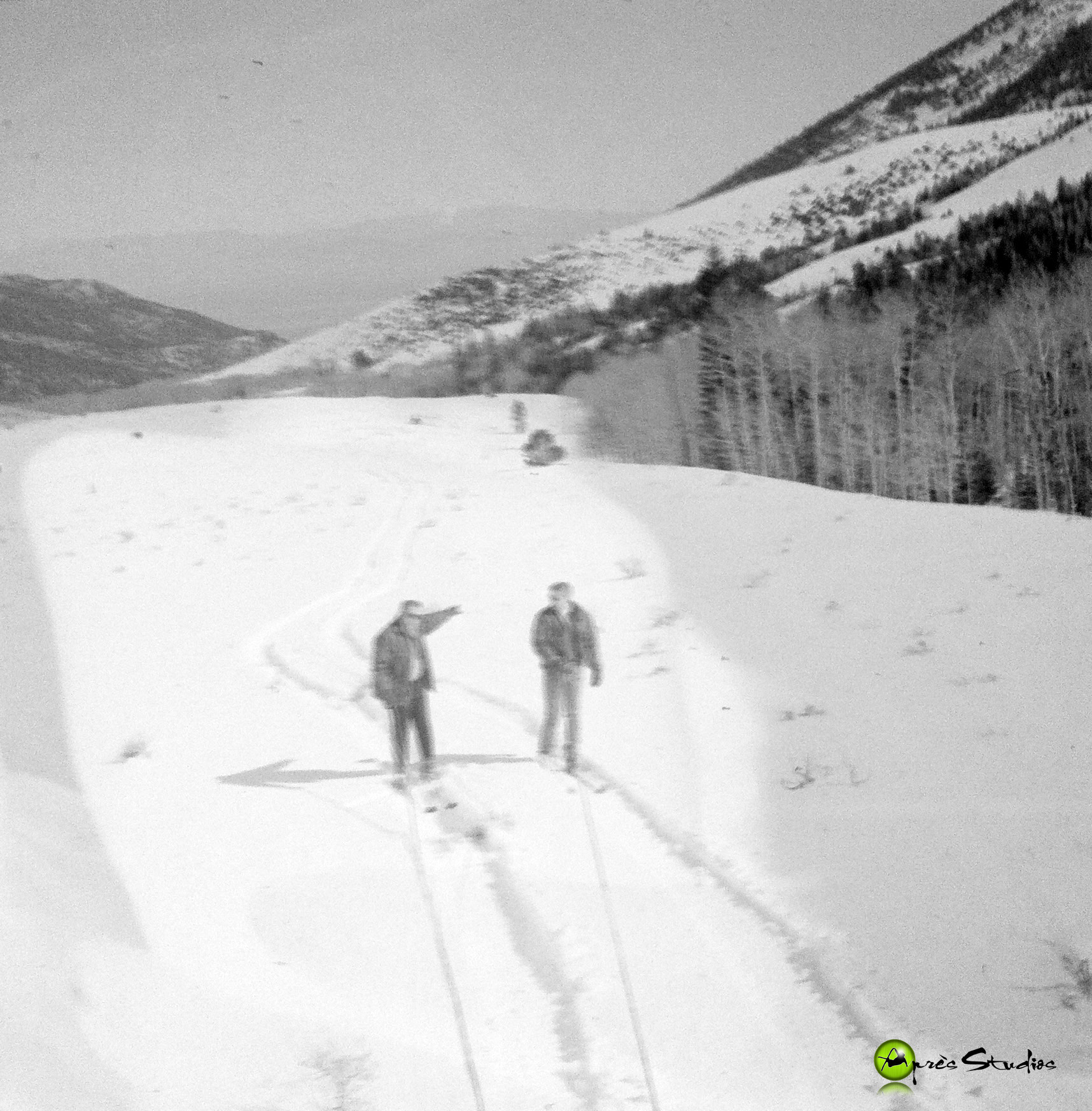 Below is a photo of the ski tow that was recovered from the Museum's archives, which, according to the information on the back of the photo, appears to be surrounded by Forest Service Employees, and others who may have been involved in the project. 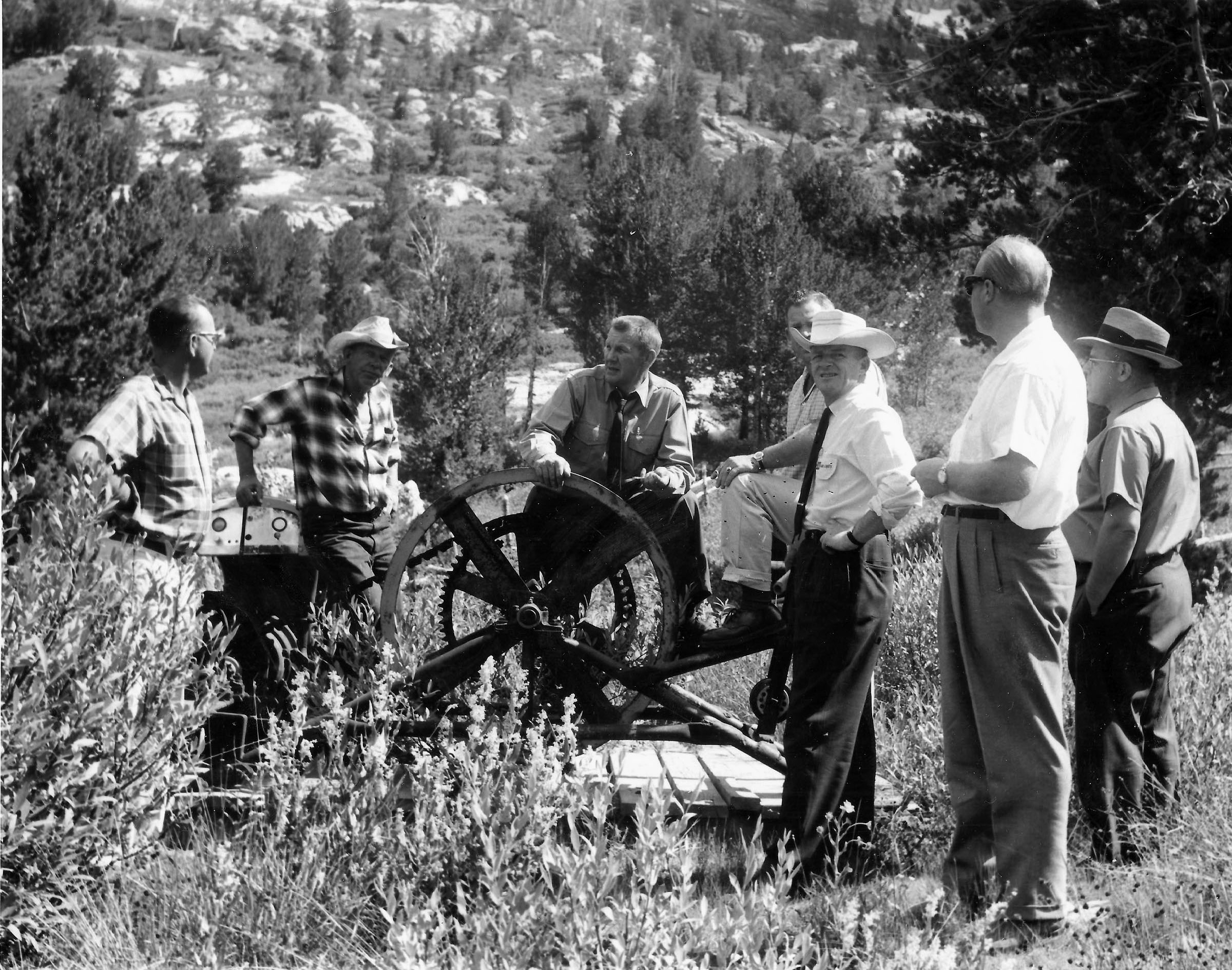 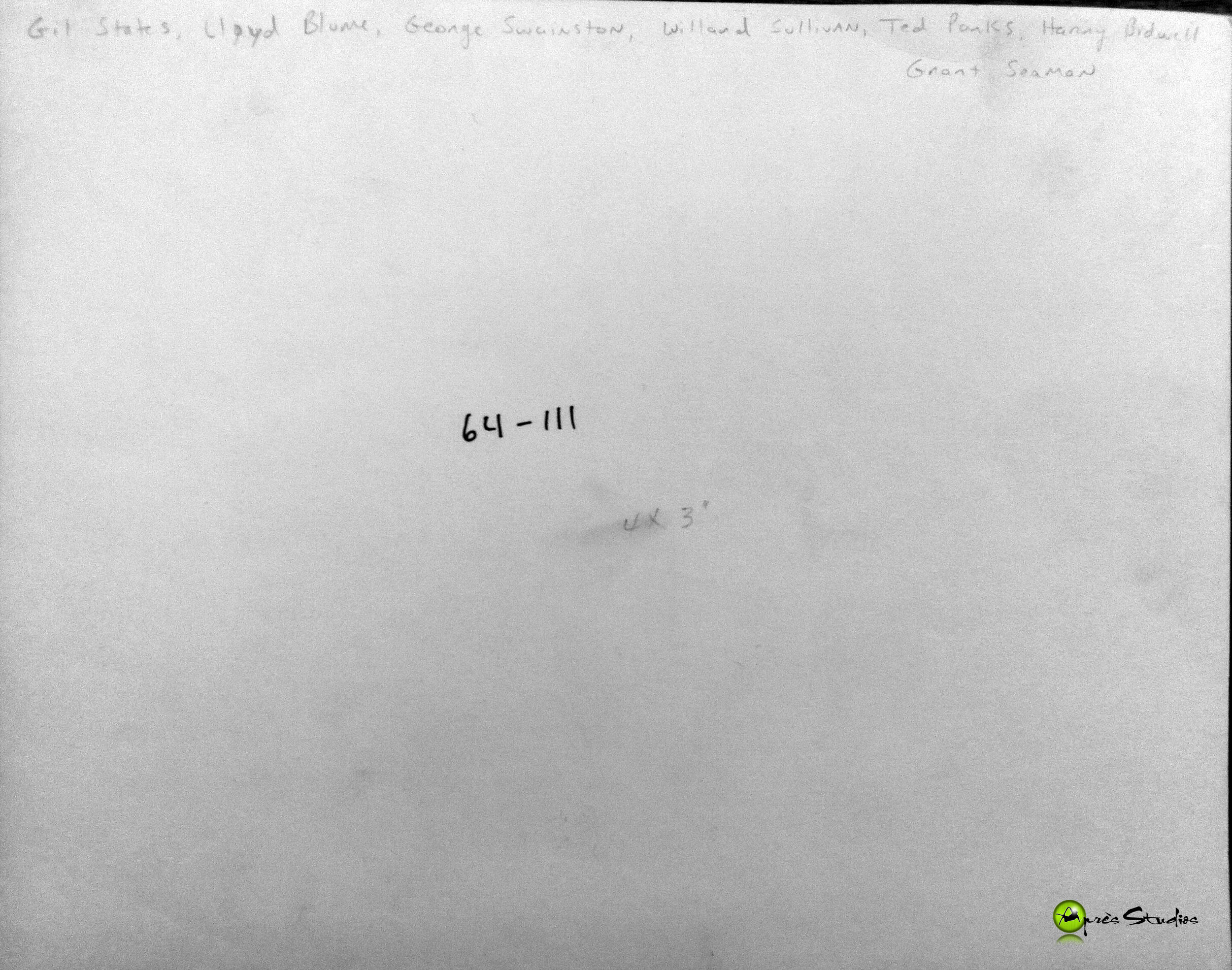 And here is a photo of the ski tow, nearly half a century later. 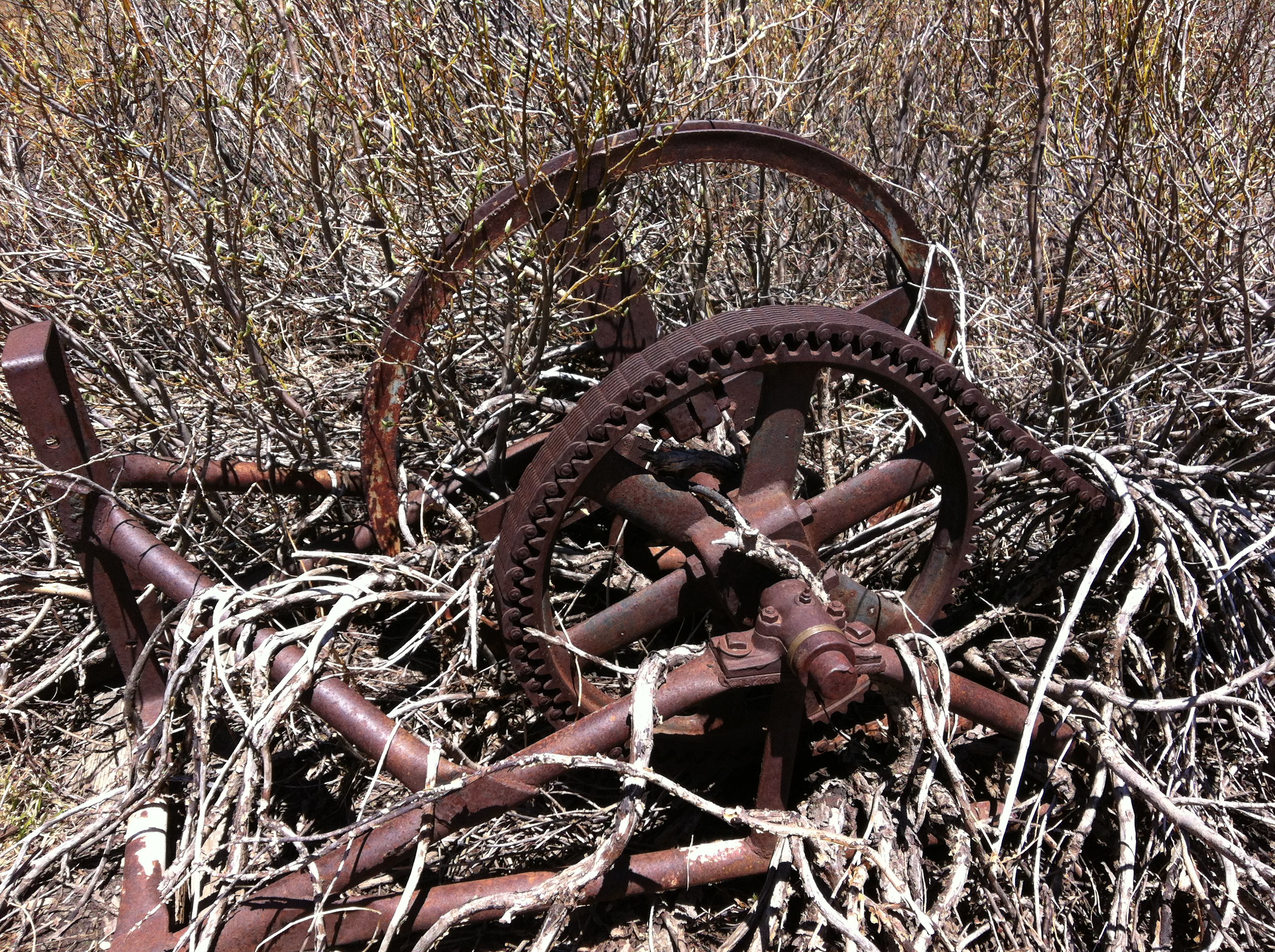 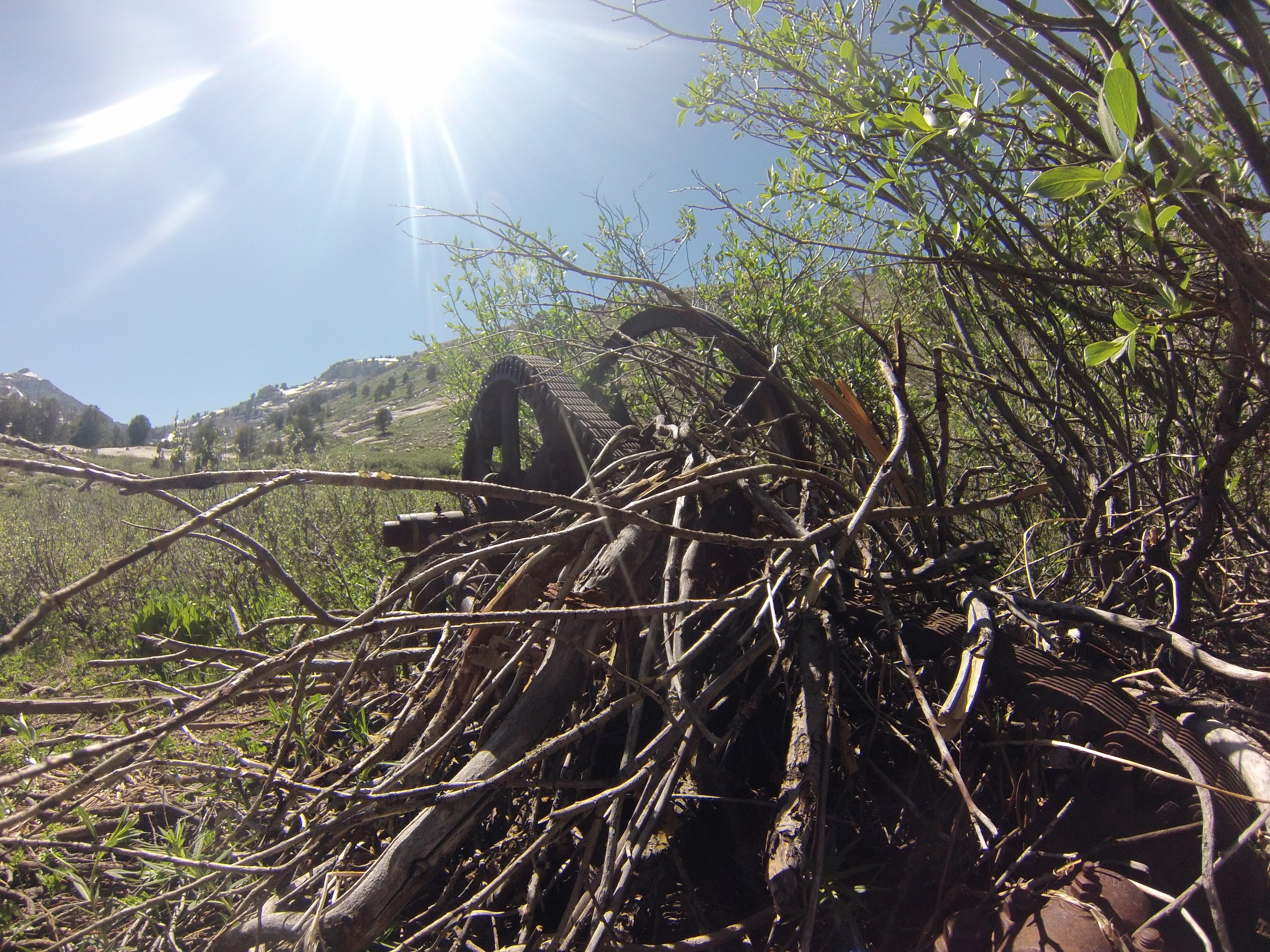 I was also able to locate Albert Salls (left), and a few months after discovering the ski tow, we made a quick visit to his house in Sparks, NV. We were able to briefly chat about his experience, and the challenges, and rewards, that went into taking the risks they did - as pioneers and entrepreneurs - in the early days of the ski resort industry.

Albert Salls (left) was also able to provide me with a copy photo that he had of the lodge (below). 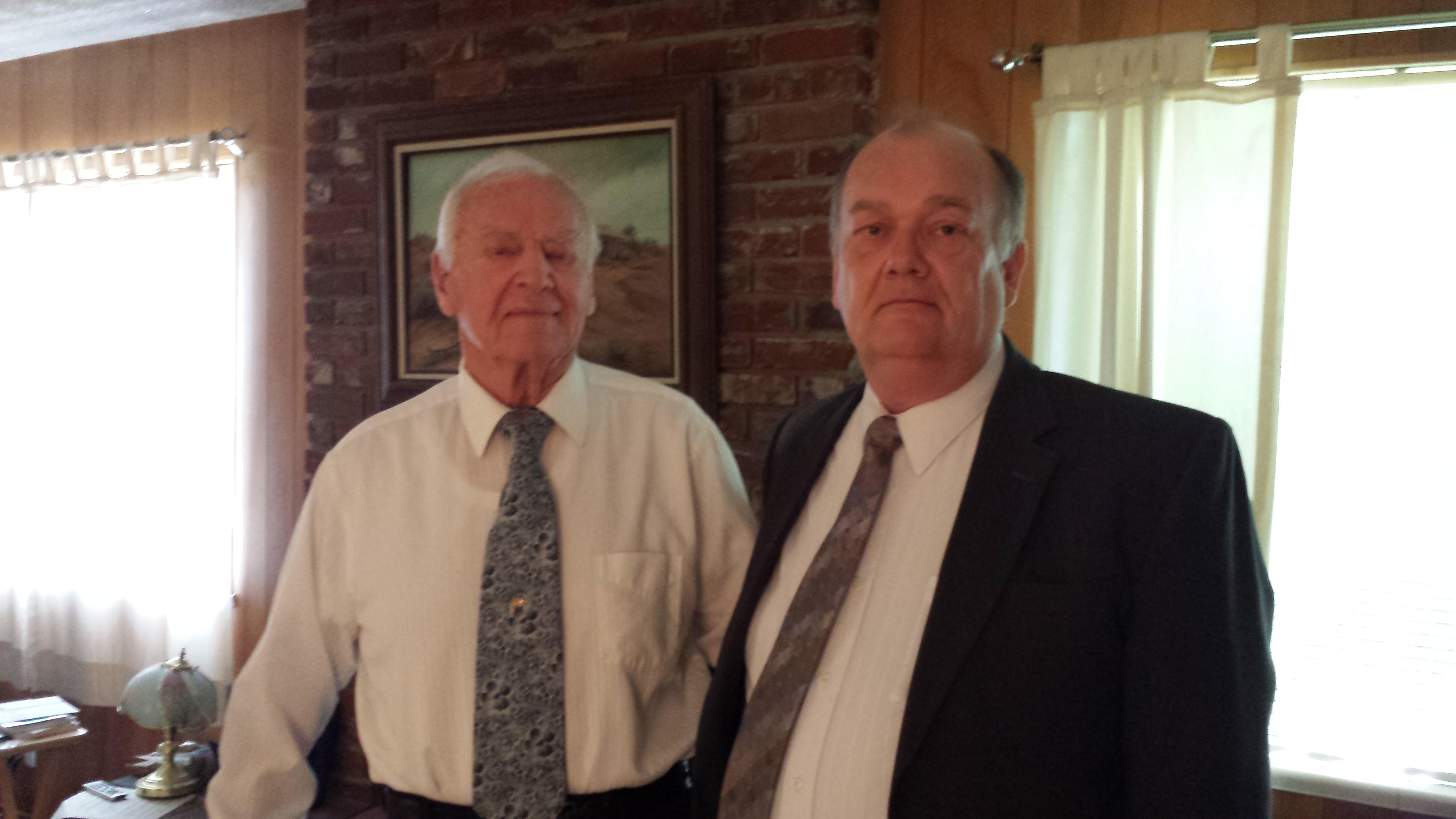 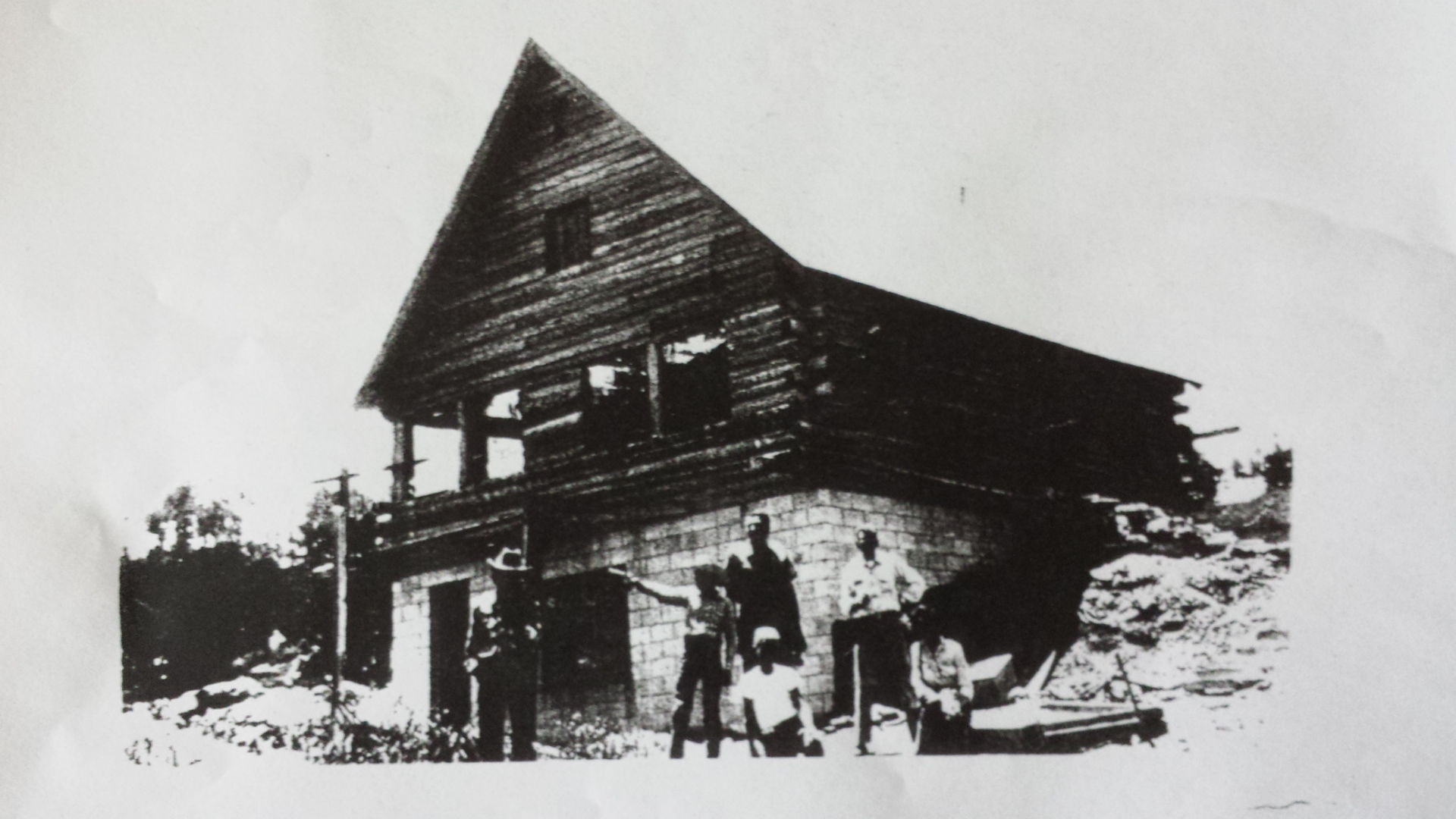 Ultimately, and maybe unfortunately, no ski resorts exist in the Ruby Mountains today. While some people would like to see one, or even Elko's community-funded, non-profit ski area, Snobowl, relocate to the spot where this "Forgotten" Ski Resort existed - and even some have suggested it could be re-opened through a Categorical Exclusion (36 CFR 220.6) which has allowed other dormant ski areas to re-open without an EIS, - it is uncertain if it could ever be done, or if it would be wanted (although the Nevada Catalyst Fund may provide incentives for businesses looking to make Nevada their home). But, therein lies the challenges that legends are forged from.

Nonetheless, the "Forgotten" Ski Resort - the ski resort that some believed never to have existed - did, in fact, exist. And although this find was truly incredible, being able to communicate and meet with some of my relatives that I did not know prior to this journey was an experience that left me blown away.

The ugly pile of metal above was part of the forgotten ski resort in the Ruby Mountains, and it was almost a lost piece of history (so it seemed). So, while we weren't discovering unknown zones, we were opening people up to the ideas that there were zones, rather ski resorts, that existed, but unfortunatly disappeared overtime. We weren't taking skiing or snowboarding to that "next level," but hopefully this story helps shed some perspective on the importance of preservation of the sport, and showcases the struggles and challenges that the pioneers and legends faced in order for the sports to evolve. It seems that with exploration, there should also be stewardship in protecting and preserving the achievements in the sports, as it leads to the discovery of new zones, and those that may have been "Forgotten."