4th portion of my #redbullraid experience started off by Dan who’s sent me down many race courses and @nastarhq then finished off with @johnatsquaw on the mic! With shaky legs from two uphill races and the first run this felt good from the start with all competitors hyped for each other. Freeride comps generate so much peer encouragement and support to up the ante. Inspired by the uphill effort and lines down the mountain by all competitors who got after it! ‘You don’t just ski fast, you #flylow ‘ #makeithappen #findoutwhatyouremadeof #weareskiing #atomicskiing #vantage107 #shiftmnc13 #hawxultraxtd130 #waxedbywend #givesyouwings #hypersmooth #goprohero7black @gopro @squawalpine @redbull @redbullsnow @atomicski

Every freeride competition seems to start a little like this: 3-2-1—dropping! Not Red Bull Raid. Instead, things go a bit more like 3-2-1—start skinning. Before competitors can even think about hitting cliffs or stomping tricks on their line, they have to first reach it. Finding the blend between endurance racing and big mountain riding, Red Bull Raid is a unique human-powered approach to traditional freeriding events. It’s the same old gnarly skiing and snowboarding, just with a bit more pain and suffering.

This April, the event was brought to life at Squaw Valley Alpine Meadows. Capitalizing on Tahoe’s status as a freeriding hub, line choice for both the uphill and downhill sections was completely up to the rider, with creativity strongly encouraged.

Things kicked off at the base of Squaw’s Silverado lift on a quintessential California spring day. 60 competitors, broken into four different categories—men's ski, men's splitboard, women's ski, women's splitboard—were given the cue to transition into climb mode and start moving.

The final score was compiled from four scored components—two uphills and two downhills—each worth 100 points. First one up the hill got the full 100. The downhill score was a bit more nuanced. Each descent was judged on style, line, and control—similar to a normal freeride contest. Red Bull Raid reflects a snowsports industry that’s steadily focusing more on backcountry travel. All in all, it was just another way to earn your turns—and a nice chunk of change. To learn a little more about the experience and find out if the concept is viable elsewhere, we caught up with winner Daron Rahlves and third place finisher JT Holmes. 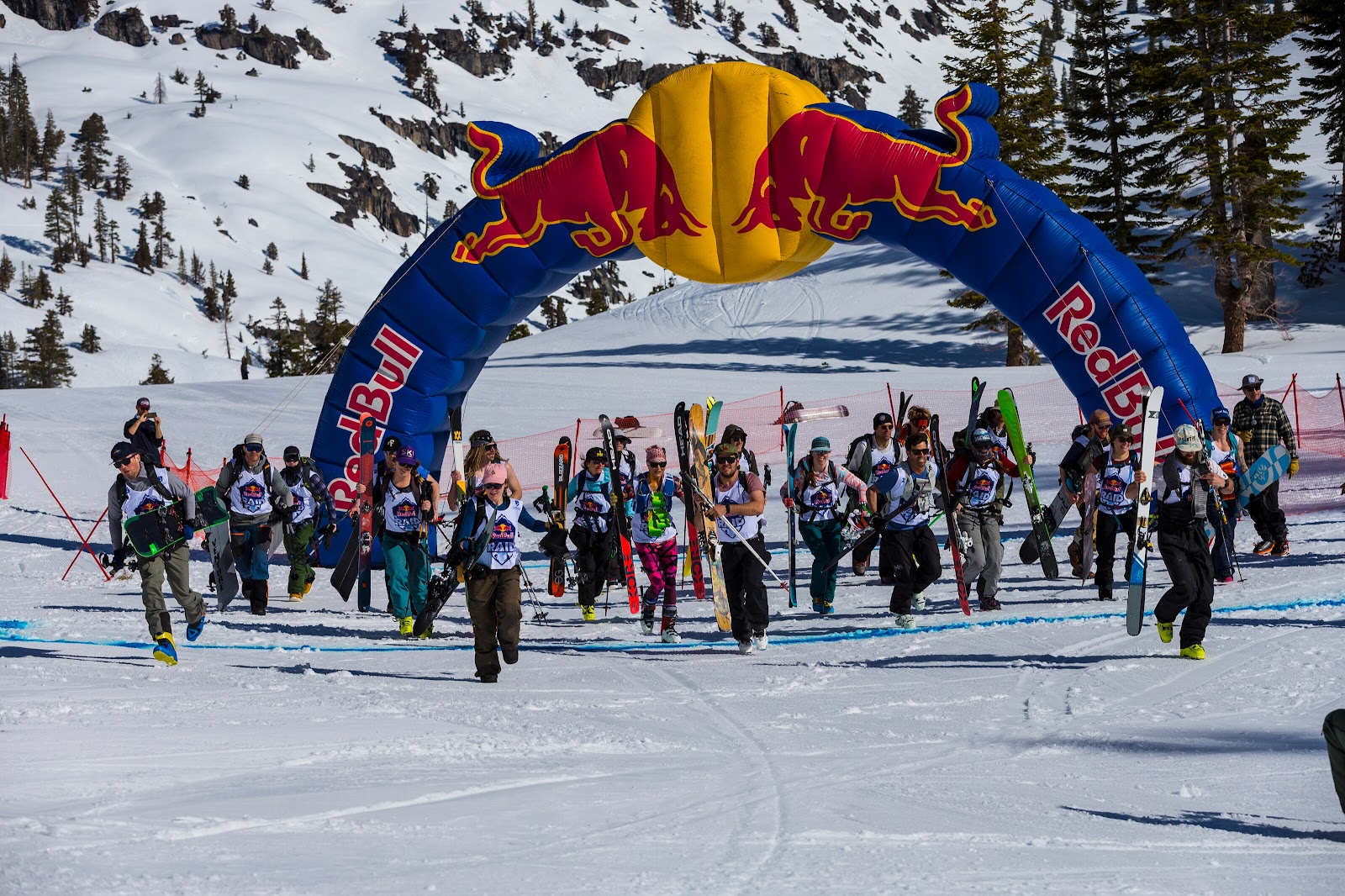 And they're off! The first step is to get into uphill mode. Red Bull Content Pool.

What was your first impression of Red Bull Raid?

DR: Rad backcountry style comp!I loved it and there was plenty of positive vibes from everyone who watched or participated.

JTH: My first impression is that Red Bull Raid was a heck of a lot of fun and there is a lot of potential for future events.

How brutal was it to earn your turns?

DR: The uphill was short but intense on breathing and maxing out physically. It made the skiing more fun for sure, but a great combo testing overall skill and strength.

JTH: Not so bad. It was more of a sprint than an endurance race. Even if you weren't in tip-top shape you could grind it out if you wanted it badly enough. 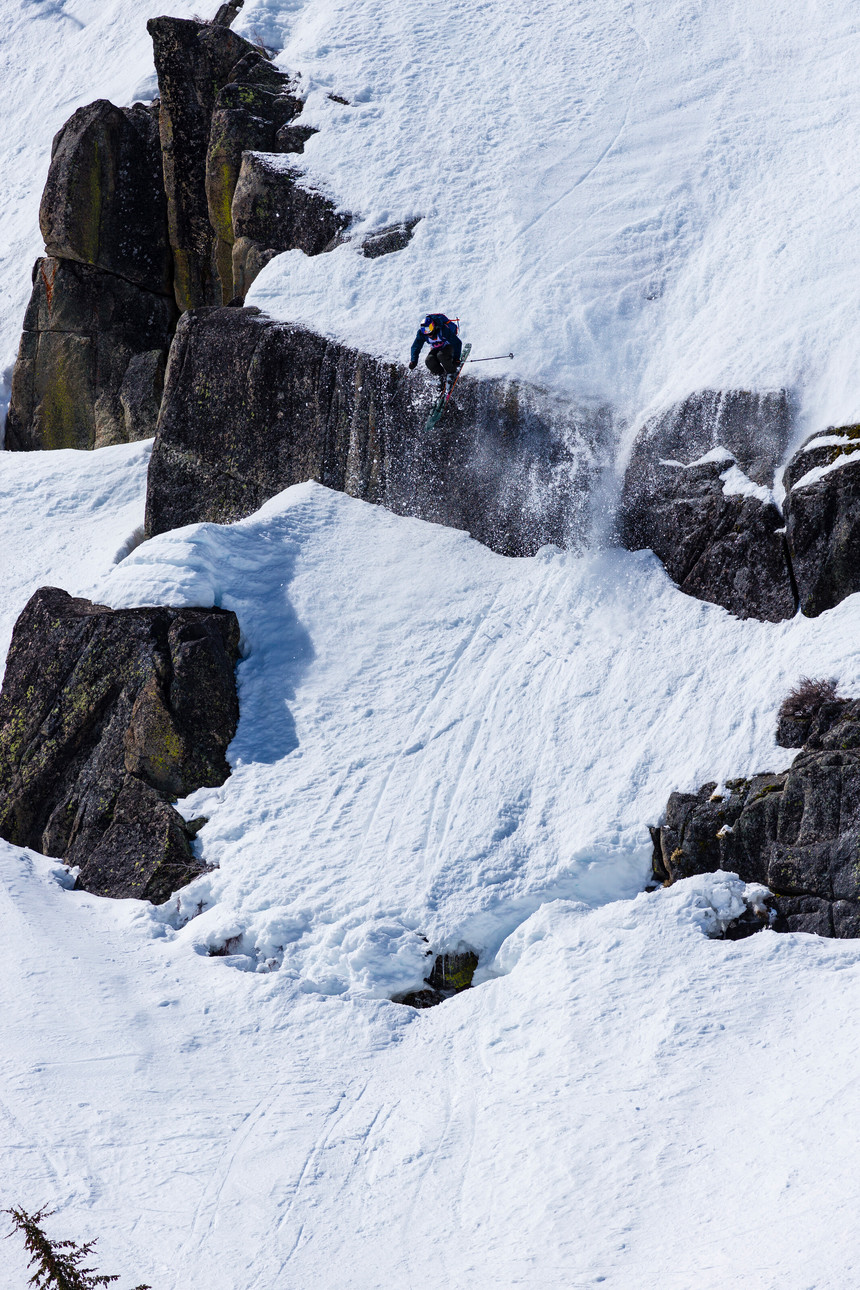 The event was still a proper freeride competition, what was your strategy going into the downhill portion?

DR: Mine was to ski a smooth and fast line I could stick with air and then mix it with a more technical portion

JTH: My strategy was to ski boldly without falling. Both downhill (and uphill) scores were combined to calculate the winner, so it was key to be without mistakes.

After competing, what do you think of the concept? How could it grow?

DR: Thought it went really well combining two uphill races with two judged freeride runs. The overall challenge was tough. The uphill included transitions at the start and finish with and a steep pitch to grind away at including a little side hill. Being the first event, word will spread and Raid will grow for sure. The men's divisions sold out quick with a waitlist. I could see having more than one event with a series.

JTH: I love this concept. It brings athletes into a fun event that otherwise would not enter a freeride competition and provides a new challenge to those that normally would enter a freeride comp. Red Bull Raid winners are not just freeriders and they are not endurance athletes either. They are highly efficient mountain travelers that absolutely rip. I think it could grow by having entries, perhaps vetted through a qualifier.

Hey look at me! This is my finals run from Saturday's Red Bull Raid event in Silverado at Squaw Valley. The raid is an uphill race followed by a judged downhill freeride ski event. Hike up with skins, ski down with cajones. It was really fun. Weather was perfect. Conditions were mixed Spring snow with some hazardous debris beneath the steeps. Big thanks to @redbull and @squawalpine for putting on this first-of-its-kind event. #mysquawalpine #springskiingcapital #tothekore @head_ski #redbullraid

What was the most challenging and rewarding aspect of the day?

DR: Most challenging was battling JT Holmes on the final uphill. The two in front of us were out of reach, but going head to head with JT hurt the most. Rewarding for me was watching everyone get after it. I was stoked to watch the creative ski runs and also see the first heat grind on the up. It's cool and rewarding to get out of your comfort zone and push hard, then watch others do the same.

JTH: For me, my finals run was both the most challenging and the most rewarding. I was pretty far back in the rankings going into the final because my first run down the mountain did not go as planned. I knew I needed to lay down a proud run to make the podium. I chose to ski the waterfall zone, which is an area that involves a pretty big mandatory cliff drop. I went there, I stomped it scored well and snuck onto that podium. I was proud of my tracks because nobody else went there.

What did you think of Squaw Valley as a venue? Any other locations you think would be well suited for this concept?

DR: Skiing in Silverado was super fun with the variety of terrain. For hanging out and watching it's a classic venue and it had a nice amount of vert. There would be some other great resorts to hold a Red Bull Raid at and I'm sure we will be talking about those soon.

JTH: Squaw Valley is the perfect venue because of its' world class skiing terrain and reliable Springtime weather and snow conditions combine to make ideal skiing and spectating for the Red Bull Raid. On top of that, athletes in Squaw Valley are more physically fit and more skilled at freeride skiing and snowboarding than anywhere else in the United States, if not the world.