We asked Squaw Valley to give us their top five best lines off KT-22–their marquee chairlift and one of the most infamous inbounds freeride spots in the Lower 48, packed with cliffs, chutes, steeps, and The Fingers–a set of massive, gnarly cliffs that sit directly under the KT quad. Every powder day, some of the best skiers and riders you've ever heard of, along with plenty you haven't heard of, do whatever they can to get in the lineup early, hotly anticipating nabbing first tracks down California's most famous chairlift. Here's what they shared:

Chute 75 once had a 75 mm cannon mounted at the top that was used for avalanche control on slopes across the way, such as The Slot and Tower 16.

The top of the Chute 75 drop in is at about 45 degrees with a cornice entrance, tipping up to 48 degrees on the skiers' left side. About halfway down the line, there's a narrow choke to navigate.

"Chute 75 is one of the most infamous runs at Squaw Valley," skier Cody Townsend says. "From fresh powder to spring slush, it skis well in nearly all conditions, and sustains a pitch of 35 degrees for nearly 1,500 vertical feet.”

When It's Best Skied: in the afternoon when it's sheltered from prevailing winds. Because of their narrow and somewhat sheltered position, chutes on the West Face typically hold snow well for a long amount of time. When it’s snowing hard and windy, snow tends to slough down the chute, refilling it and making it smooth.

Originally known as The West Face and still often called such by locals, Moseley’s was renamed after U.S. Olympian Jonny Moseley won gold in the 1998 Winter Olympics in Nagano, Japan. As a youngster, Jonny participated in the Mighty Mites race program at Squaw Valley, and wanted to switch from racing to freestyle skiing after seeing the movie Hot Dog, which was famously filmed at Squaw.

Squaw Valley told us this made the list because of the ongoing locals' challenge to ski it top to bottom without stopping.

When It's Best Skied: as the first stop on a powder day, as well as on spring days when the snow is softening up. Best skied in the afternoon when it is sheltered from prevailing winds. 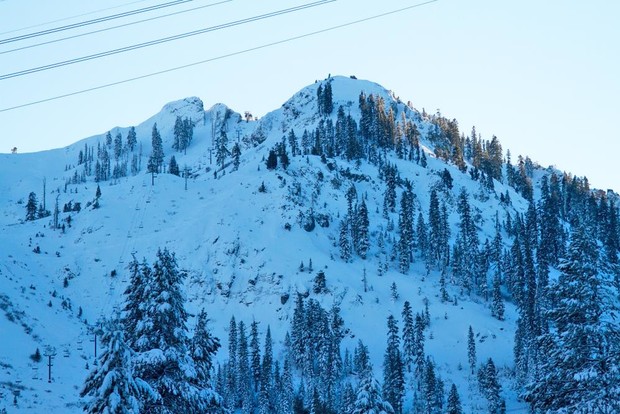 The Fingers jut out of the mountain just above the trees in the middle of the photo. Ryan Dunfee photo.

With KT-22 running directly over them, there is a much beloved show-off factor involved in shredding The Fingers, and it's one of the zones on the mountain that's earned Squaw the nickname "Squallywood" For spectators on the chairlift and at the base area, this is an opportunity to watch some of the best skiers and riders in the world sending it deep.

“From the top of the KT-22 lift, follow the ridge that parallels the chair until it steepens. From there, go right to pick your way through Coleman’s area via lines like Coleman’s Alternate and Railroad, which have tight chutes and mandatory airs. Or spot the clump of trees, which marks the takeoff for Booger Rock; then carry your speed through the flats to the Fingers. It’s a series of steep chutes and spines with true Squallywood visibility [as it’s right under the chair],” says skier J.T. Holmes.

When It's Best Skied: in the morning after fresh snow, as the rocky outcropping of The Fingers can often be uncovered by the end of the day. 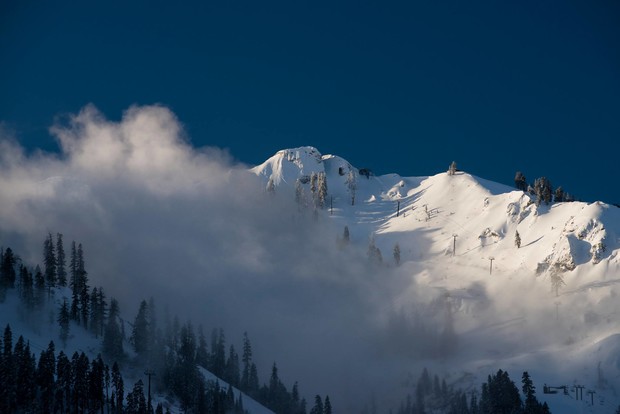 Originally known as East Face, Tamara’s is so named for Tamara McKinney, a Squaw Valley native who was the first American women to win the alpine skiing World Cup overall title.

About half way down Tamara’s, a skier’s left will take you towards Deadman’s, a rocky bench with multiple rock features. Or, cut below Deadman’s for great hidden pockets of powder.

When It's Best Skied: as you enter Squaw Valley by car, you can see the first tracks carved into this run from a long way off, creating a level of excitement for the start of the day. Best skied in the morning since it gets great light, this run is a good starter for a day of spring skiing. On a powder day, locals will flock here after hitting up the West Face.

Women’s Downhill was the site of the 1960 Winter Olympic Women’s Downhill race, which ran 5,897 feet long with a drop of 1,814 vertical feet and was the venue for the Gold Medal win for German racer Heidi Biebl. The course has been used in recent years to host the U.S. National Alpine Championships.

When It's Best Skied: this run holds snow superbly well, and when Olympic Lady chairlift is spinning, it serves as its own show off-line for riders on the lift.

Any mention of Squaw would not be complete without mentioning The Game of G.N.A.R., the film on which we embedded below for your viewing pleasure. Also, for the ultimate guidebook to extreme skiing in Squaw Valley, you must buy Robb Gaffney's Squallywood because, admittedly, it's way better and more thorough guide to Squaw Valley hucks than this article, covering other gnarly areas like The Palisades and Silverado.