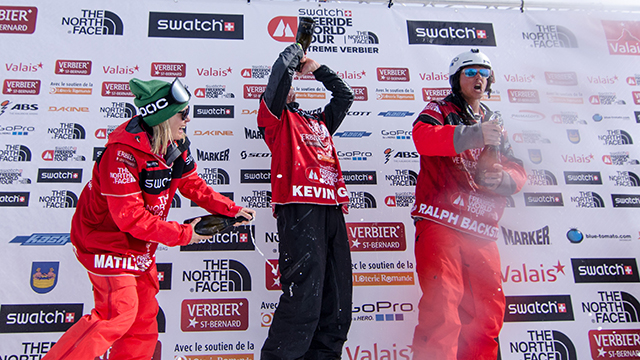 Ralph Backtsrom is no stranger to the podium on the Freeride World Tour circuit. The overall title has eluded him till this year when he dropped into the infamous Bac de Rosses face with aggression and not only won the day, but the overall title as well. We caught up with him to get his take on his first ever world championship.

TGR: Ralph, after a few years of near misses, you’re the FWT World Champ. Has that set in yet? How does it feel?

Ralph Backstrom: It's been a long road of near misses, and yes, it has set in. I'm super stoked.

TGR: You dropped first and wound up staying on top. Tell me about your line choice. Also tell us how nerve-wracking it was to be in the hot seat for the entire competition.

RB: I knew I was going to be dropping first 2-3 days before the comp; just had a really strong feeling. The only thing was that I thought the skiers were going to be going first. When we heard that the snowboarders were going to go first, I knew I still had the 1st bib. It can be a bit nerve wracking going first, but most riders in AK prefer to go first, right? I had been in Verbier for 5 days or so before the comp and had picked a line out. After 2 bad line choices/falls in the prior comps, I picked the first line that spoke to me when I saw the face. Then, the night before the comp, I kept having these micro dreams/thoughts that parts of my line were too tight for the amount of slough that would be moving, and kept having trouble visualizing individual turns. So I woke up super tired, and the fog didn't help me feel any more awake. I definitely wasn't in a state to ride a technical line. I changed my line minutes before I left the judges tent to start hiking to something less technical and less exposed. It wasn't until I saw my score that I knew how good my run was. I had flown passed some features I'd planned to hit, so thought I'd be easy to beat. I definitely dodged some bullets sitting there at the bottom watching the others come down!

TGR: You were in third coming into the finals at Verbier. How did that affect your decision-making when you were picking your line?

RB: I try not to let stuff like overall points get into my head for decision making, so I just tried to pick something I knew I could stomp most of, with some bigger airs that were maybe questionable.

TGR: What was going through your head when you dropped into the Bec?

RB: I was so rushed before we dropped I didn't have time to think at all. A couple riders and myself were talking to Nicolas Hale-Woods on speaker phone about contingency plans if the fog didn't clear. It cleared right then, and he said, “forerunner in 2 minutes!” After he dropped, the starter said, “Ralph Backstrom 2 minutes! No, 1 minute!” I even forgot to put on my backpack up there.

TGR: The tour lasts all winter. What do you do to stay on your game when you aren’t competing?

RB: I try to stay in shape, have a good time riding, and stay healthy.

TGR: You’ve had some pretty awesome film segments. What drives you to compete in the Tour?

RB: Competition lines and film lines are pretty similar, and doing either of them is good practice for the other. I do think comp lines generally tend to be a little more difficult due to conditions, tracks, etc, and are therefore good preparation for filming. It's a good way to travel the world with cool people too.

TGR: What venue is your favorite one to compete at?

TGR: After finally getting the overall title, are you planning on competing next year?

RB: That's hard to say at this point. The tour is great, but I think there are still a few things that could use some polishing, and you never know what other opportunities will come up...

TGR: What are you going to do with the rest of your winter?

RB: I'm in Laax right now for the GoPro Snow Camp, heading back to Tahoe in a few days for the Pain McShlonkey, then up to Alaska.