Seth Morrison is an extraordinary skier. With a career that began in 1992, the 38-year-old famous for his lofty back flips and smooth style is still considered to be one of the best athletes in the sport. This fall, Morrison will release his two-year film project titled, “The Ordinary Skier,” a movie that follows him as he focuses on ski mountaineering in Chamonix, France. Tetongravity.com caught up with Morrison to learn more about the upcoming film and his experience in Chamonix.

“The Ordinary Skier” is a two-year film project that focuses on you, but what’s the jumping off point?

It’s an autobiography about me that touches on Chamonix and how the mountaineering aspect of skiing is a new chapter of skiing for me.

Chamonix is one of those places where you have lifts to help you access the mountains and you can get a lot more done than trying to go do some sort of camping expedition where you’d be doing sort of the same kind of skiing. But, it’s less dangerous in the respect that you have a better opportunity for rescue than in, let’s say, some of those southern hemisphere places like Patagonia, where you’re in pretty deep. You still have to rely on your crew, but if you need a helicopter to rescue somebody, then that’s available.

What other locations did you film? And who else is in the movie?

Probably half of the movie takes place in Chamonix. But other places were more of a revisit to locations I’ve filmed in before, like British Columbia, Retallack and South America.

Each location I ski with different athletes and it’s just one athlete per trip. That ranged from Sean Pettit, Pep Fujas, Dan Treadway to JP Auclair. The story is told through the places and the interviews between myself and the other athletes.

Our guide played a big role in Chamonix. He’s an American by the name of Nate Wallace. He’s from Mammoth. He’s friends with the team manager from Oakley. It just kind of fell into place last second with him guiding us around, which was perfect, because it was more from a true extreme skier’s aspect than, let’s say, a pro skier guiding us around. 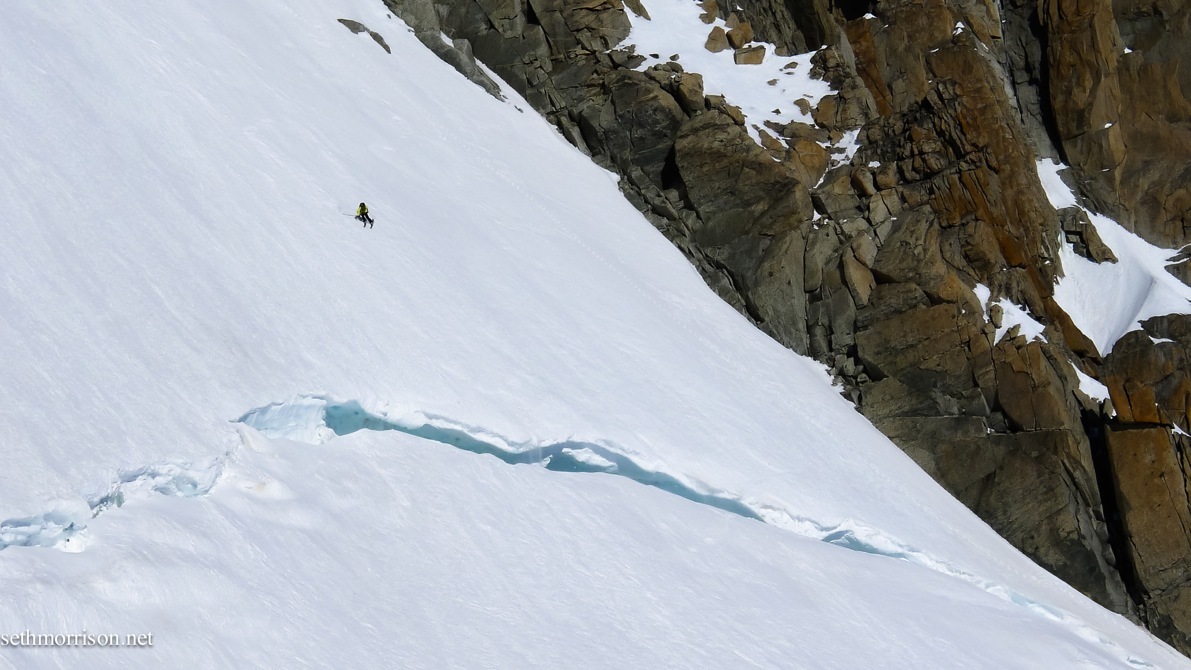 JP Auclair skis out the bottom of the Macho Couloir in Chamonix, France. "At the time, JP was also skiing above a massive serac, over a 400-foot drop," Morrison said.

It’s more ski mountaineering in Chamonix. Where you’re climbing up faces using ice axes and crampons, so its not really typical backcountry skiing where people go off a resort, maybe go up a boot hike or a little skin. This is one-run a day kind of skiing — if you’re lucky to get that opportunity.

JP Auclair and Seth Morrison climb ice that separates the two faces on the Tour Ronde near Chamonix, France. "Yes we had to rappel that," Morrison said. "One failed attempt last season, we had 3-foot-plus deep sloughs ripping down that ice when we got to it. If we had been 20 minutes earlier that day, could have turned out rough."

You went to Chamonix twice for the filming of this movie. What are the town and people like there?

There’s just a lot of people that are out doing the same kind of things that you’re doing everyday. People are trying to get deep into the zone over there and climb up stuff. Most of the time it’s maybe their first time doing it, or maybe they’ve done it a couple of times. Seems like people are trying to check everything they can off a list as the season goes on. With the exception of a few spots that are easy to get to, people are constantly going to different peaks. Some of it is conditions-based and others isn’t, and even if it’s supposedly a bad year, people are still going for crazy stuff like it’s just another day.

The locals that are there, they have lots of experience that they’ve gained through all these different runs they’ve been able to accomplish. So it makes it hard to go there as a first- or second-timer and really think you’re going to get a lot done, because it takes a lot to figure out how to get around and what you need to do to accomplish your goals there.

Chamonix. It’s just massive, vertically. You can ski the biggest thing you know. You can ski a run that’s 9000 vertical — that’s twice the size of a ski area in the U.S. It’s pretty noticeable. [Laughs.]

Did you ski any gripping lines in Chamonix?

I got to get in two runs off the Aiguille du Midi, which have been skied hundreds of times by people. A lot of people wait for April and May to get on these lines. A lot of runs involve rappelling within the line, so it makes it way less slash-skiing than what’s supposed to be in normal ski films — and even what we’ve learned to see from “Blizzard of Aahhs.” … The way people are skiing Chamonix now is way beyond anything going on in that movie. That’s one of the last movies where Chamonix was really highlighted.

Nate Wallace below the north face of Tour Ronde, near Chamonix, France. "After a few failed attempts with too many climbers or large sloughs coming down on us, we got it after an early 4 a.m. start," Morrison said.

How has Chamonix changed you as a skier?

I’ve been going through all the different disciplines of skiing. When I was younger, I was skiing for myself. Then I did some racing and some mogul skiing. Then there were the extreme competitions, then filming and all those adventures.

The last 10 years has kind of been a routine. It’s always the same place, same time of the year. You get to go to new locations within those zones. But, you just kind of feel like you’re doing the same thing over and over again. Even though, for some people, they would give their right arm to go and do it.

The Chamonix stuff is totally new and fresh to me. As far as, not knowing what you’re doing, but you still know the ski part. It’s just all the ice climbing, rappelling and rope
work. Using everything you brought out there. So it’s just kind of the rebirth of skiing for me.