Pro freeride snowboarder Ralph Backstrom has been crushing it in 2012. In less than one month, the Squaw Valley shredder has taken command of the Freeride World Tour by winning in Revelstoke and Courmayeur and grabbing second in Chamonix. In the wake of his dominating contest lines he’s left the deflated egos of some of the best freeriders on the planet including Xavier Delerue, Lucas Debari and Matt Annetts.

But seeing Backstrom on the podium comes as no surprise. This ain’t his first rodeo. He’s been stomping lines for a few years on the North Face Masters tour and took second overall in 2011. History would suggest the guy has genetics working for him, as well. Ralph’s sister Ingrid needs no introduction as one of the most celebrated female freeride skiers ever and his late brother Arnie was equally talented on snow having won the 2010 Subaru Freeskiing contest in Revelstoke prior to passing away in a skiing accident while filming in Peru with Sweetgrass Productions in May 2010.

So then what’s up with Ralph’s winning ways other than the big smile and big legs he’s always had? Tetongravity.com hit him up in between laps on the Aiguille Du Midi to get a breakdown of his recent contest runs and a glimpse at his headspace going into the final three FWT stops. After the interview scroll down to see Backstrom slay his first three contest lines. 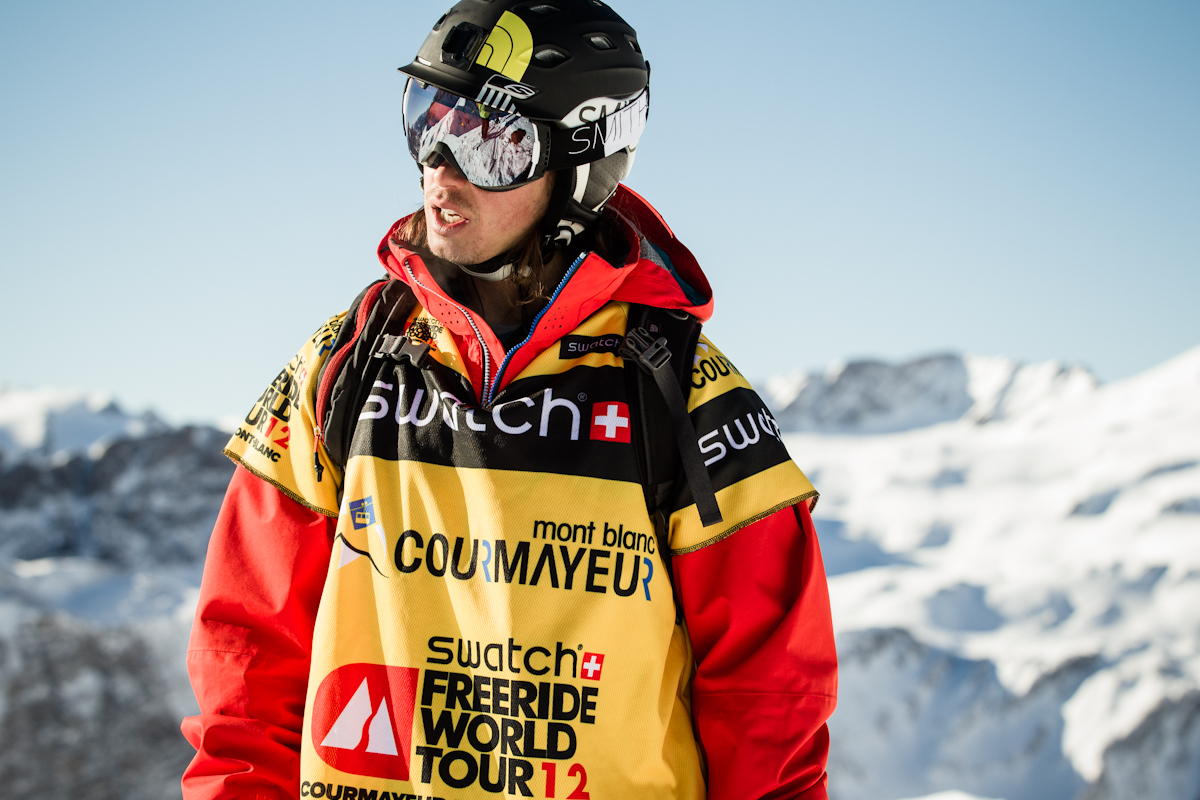 TGR: Why have we never seen you on the FWT podium before? Have you competed on the FWT?

Ralph Backstrom: Yeah, I’ve been to FWT comps in Mammoth, Tignes, Verbier and Squaw Valley. I fell at every single one of them.

TGR: How does the vibe on the FWT compare to the vibe at The North Face Masters comps?

Ralph Backstrom: I would say the FWT vibe is more serious, but the venues tend to have higher consequence lines, and the prize money is substantially higher, so I guess that cranks up the attitude a notch. Everyone is generally still really friendly, but you can tell that things are taken a bit more serious.

TGR: The merger of the Freeride World Tour with the Subaru Freeskiing Tour sure worked out nicely for you. What was your reaction to the surprise invite to the FWT Revelstoke contest?

Ralph Backstrom: I was very pumped! There wasn't any snow in Tahoe and I knew that Revelstoke had been getting snow so it came at the perfect time. Ended up that I got a week of riding pow on top of the contest win; pretty sweet.

TGR: Did any thoughts of winning in the same arena as Arne did cross your mind before the FWT Revy comp?

Ralph Backstrom: I wasn't thinking about the winning part as much as I was thinking about his line. His line was extremely smooth and fast, and looked pretty fun, but I knew that conditions had to be just right to try and give the line any justice. It wasn’t filled in quite enough so I decided not to try it.

TGR: How were the conditions at the FWT Chamonix?

Ralph Backstrom: The Chamonix venue didn't have a ton of "winning lines," so most of the skiers and a few snowboarders went for the same double. The middle of the venue, right about where that double was, rolled over pretty good, and the light was semi-flat, so it definitely forced you to visualize your line and remember any sort of markers you could find in your photos. The day before the comp we were riding knee to thigh deep pow, so everyone thought the landings would be extremely deep (until we saw the fore runners come down); the snow was shallow wind buffed pow, and was sort of bouncy.

TGR: The FWT Chamonix had a stacked field. Did you ever doubt your chances with the level of competition on hand?

Ralph Backstrom: Of course. There are lots of good riders on the tour, and with guys like Lucas DeBari, Xavier, and Matthieu Crepel, you can't help but expect big things out of them. I try not to think about what others are riding or about the podium and just focus on my own line. 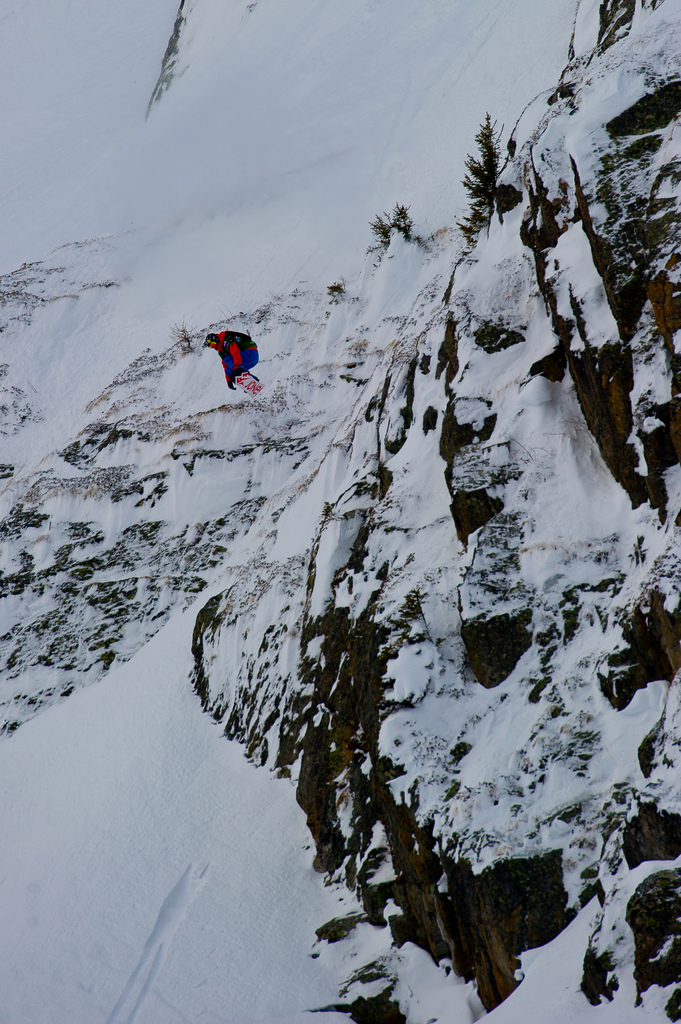 TGR: Heading into FWT Courmayeur were you feeling confident? What changed in your game face?

Ralph Backstrom: I suppose I was feeling confident, but I didn't change anything. All you can do is get to know your line the best you can through your photos and binoculars and ride it the best you can. I was pretty sure I had picked a line I could stomp, and I saw Julien Lopez ski it pretty smooth before I got in the heli, which definitely boosted my confidence.

TGR: Did you line up that double drop at Courmayeur as planned?

Ralph Backstrom: Not entirely. My main concern was what I would be headed for if I did in fact fall. There were some bigger rocks further to the rider's left that concerned me more than the little guy I landed on, so I guess I favored aiming slightly rider's right. I had planned to be a foot or so to the rider's left, missing that last rock, but I observed mid-line that the rock had a decent amount of snow on it, so avoiding it became less important. My board suffered a couple fine scratches on the tail, but no core shots or anything deep. My quick heel side turn right before the air was meant to set my trajectory for the entire straight line; I was off by a few degrees, which probably translates to a foot or so when you bring distance into the picture.

TGR: Do you feel any pressure as the tour leader halfway through?

Ralph Backstrom: Not really. A world title would be cool to have, but I just like to take things one run at a time.

TGR: What do you think about midway through a contest run?

Ralph Backstrom: It's hard to think when you're so focused on the line that you've envisioned. It's mainly just autopilot until something unexpected or out of the ordinary shows itself.

TGR: What elements do you look for in a contest line?

Ralph Backstrom: I look for the same things I look for when I'm freeriding; transitions and lines without excessive exposure and with good snow coverage. It's a freeriding comp, so why look at it any differently than I would if I was freeriding? Many times, the guy who has the most fun wins.

TGR: How do you decide a line is big enough to be a podium contender?

Ralph Backstrom: The winning line won't win unless it's stomped so I look for lines that I think I can stomp first. Then I decide which one looks like it will be more fun. Many lines on a given venue could be the winning line depending on execution, so I try not to put too much stress on whether I think it'll be big enough.

TGR: Any training that you credit with your success this year?

Ralph Backstrom: I had been biking and jogging quite regularly until I broke my scapula and tore my rotator cuff mountain biking in September. I started hitting the Performance Training Center in Truckee with guidance from my friend Chris Cloyd. We worked on strength and stability using bosu ball exercises and a bunch of squats. I tried to stay in the gym and avoided shredding the white ribbon of death early season to give my shoulder time to heal.