IPRW Day III: In The Heat Of The Moment 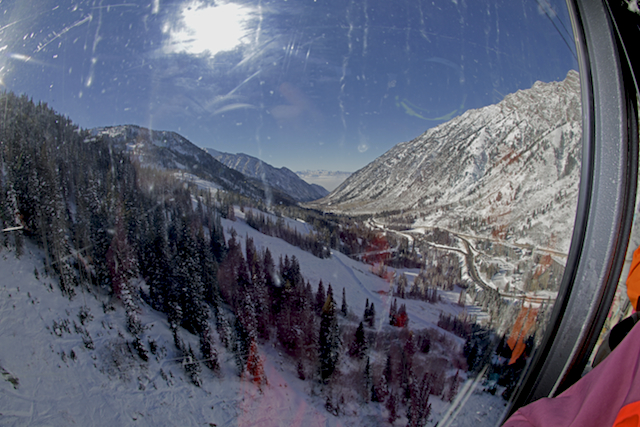 TGR's International Pro Rider Workshop presented by Icedot.org has been going down this week at Snowbird. The three-day workshop trains TGR's film athletes and cinematographers in critical ropework, wilderness first aid and rescue, and avalanche awareness skills so they can be on point for the winter ahead. Day I, instructured by Exum Mountain Guides' Zahan Billimoria, brought the crew up to speed on rope skills for accessing steep and dangerous terrain. Day II, taught by Denali medic Dave Weber, focused on how to properly assess, stabilize, and rescue an injured rider in the backcountry. Yesterday's final clinic refreshed the group's understanding of avalanche safety, avalanche beacon use, group dynamics, and finished with a full-bore practice scenario requiring multiple rescues after an avalanche. 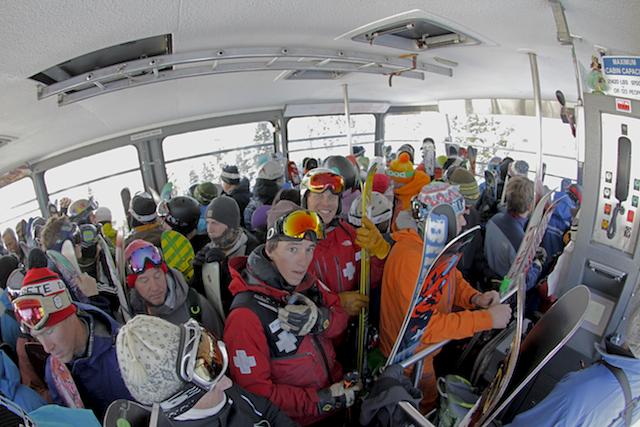 After an early morning in the classroom, the crew worked its way to the top of Snowbird for beacon drills. In the foreground of the full tram, ski patroller Seth O. readies to school us on avalanche beacon use. Good luck in your college finals, dude! Ryan Dunfee photo. 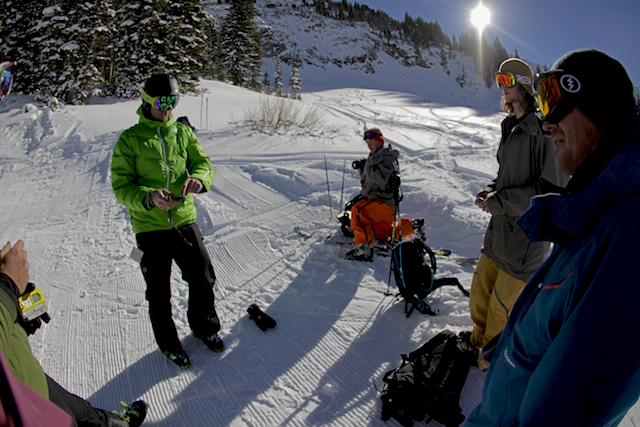 Denali medic Dave Weber instructed a group on how to manually perform a multi-burial avalanche beacon search, negating the need to depend on a given beacon's technology to find more than one victim of an avalanche. Essential to know in case your beacon's multi-search mode is glitchy or underperforms. Ryan Dunfee photo. 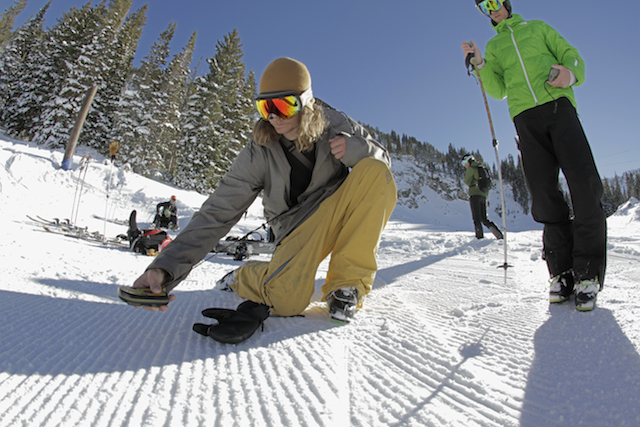 Co-Lab star Nick McNutt practiced boxing off the final grid for locating a victim exactly enough to punch a probe in the snow and find them on the first hit. Practice makes perfect, and regardless of the level of skier or rider you are, practicing these skills - even on a groomer - is necessary for making an effective rescue in the panic and tension of a real rescue. Ryan Dunfee photo. 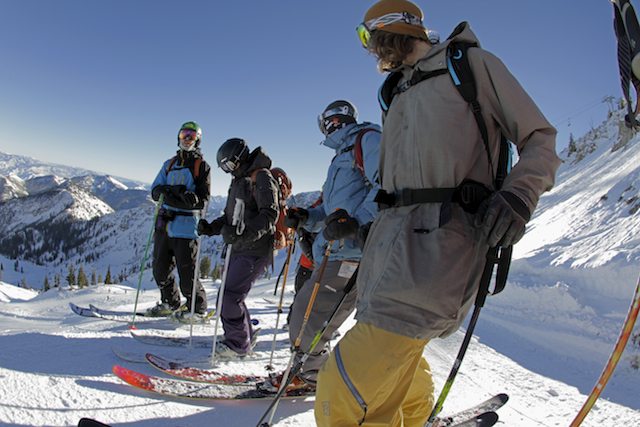 Towards the end of the day, we faced the culminating test of the skills developed over the course of the IPRW workshop. Here Ian McIntosh explains the scenario the crew will have to respond to: two athletes speeding up a slope on a snowmobile during a film shoot in the backcountry, during which a 300-foot wide avalanche takes them both out, leaving one partially exposed and a second completely buried. Mac would play the second victim, and left skis, poles, and gloves in the practice debris field to simulate a real avalanche scenario. Ryan Dunfee photo. 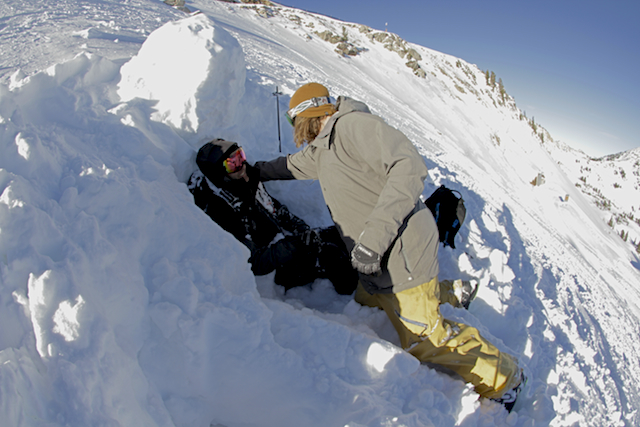 At the go signal, Dustin, one of our cinematographers, was tasked with being the group leader and immediately sent three people down with beacons in search mode to sweep the avalanche path for the victims. It's essential in the event of an avalanche to turn everyone's beacons to search AND to turn off all cell phones. Even in airplane mode, an iPhone's electronic signals can interfere with an avalanche beacon if they're within 50 centimetes of each other. Nick McNutt quickly discovered a half-bured Greg Epstein and turned off his beacon so as not to confuse the rest of the search crew. McNutt stablized Greg's broken shoulder and determined that he was mobile enough to make his way to the second scene under his own power. One of the group's mistakes, however, was not to leave at least one other person with Nick to fully evaluate Greg for a spinal injury and transport him in the event of a serious injury. Ryan Dunfee photo. 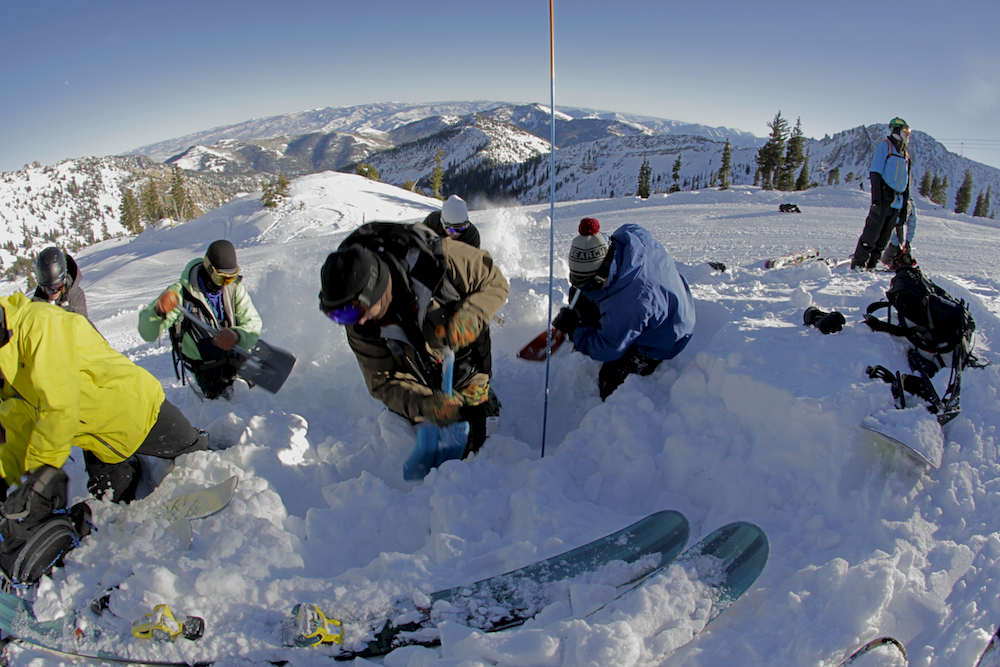 The rest of the group descended upon the second beacon's signal, and after a probe strike found something 1.5 meters under the snow, the members of the rescue crew who had been assigned as shovelers furiously began digging away downhill of the probe strike, using alternating diggers in a "flying V" formation to move snow out of the way efficiently and create an exit to quickly extract the victim. Tim Durtschi led while Colter Hinchcliffe, Dustin Handley, and Dan Gibeau moved snow away from the hole. Ryan Dunfee photo. 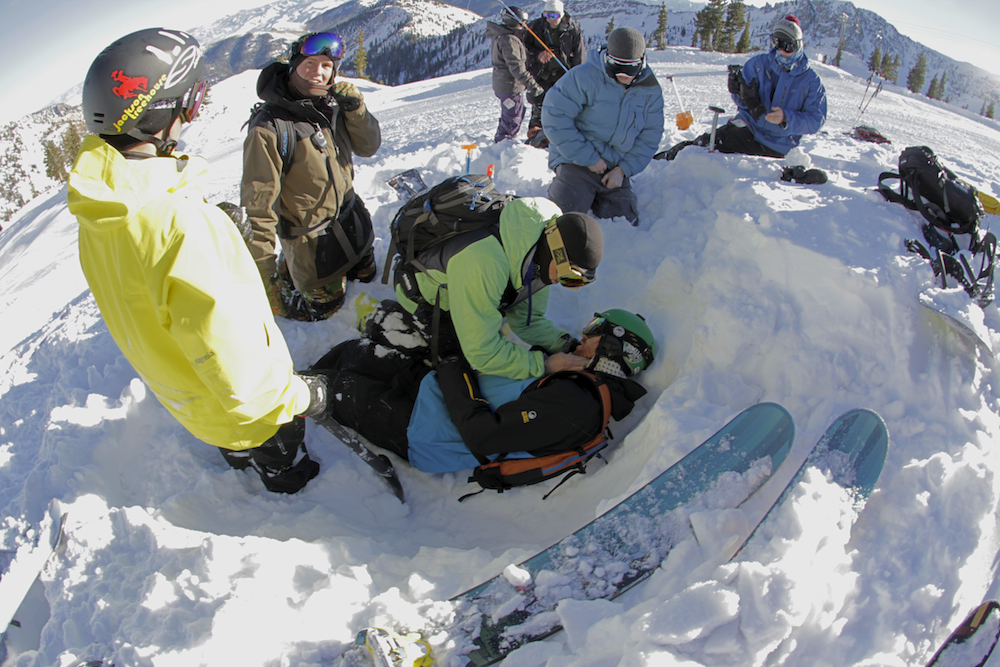 The crew found an unconcious Ian McIntosh who was also found not to be breathing. Here Colter checks for a pulse while Dustin and Jill establish communications with a search and rescue crew. Ryan Dunfee photo. 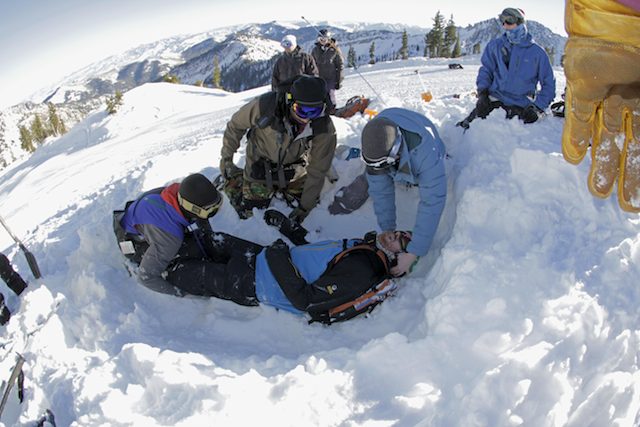 After resuscitating Ian, cinematographer Blake Campbell tilted Ian's head back to create a fluid airway while holding his head to stabilize for a possible spinal cord injury. Meanwhile, Colter felt around the rest of the body for secondary injuries. With Mac getting hypothermic, time was of the essence, and jackets and hand warmers were ripped out of packs to keep his core temperature stable. Ryan Dunfee photo. 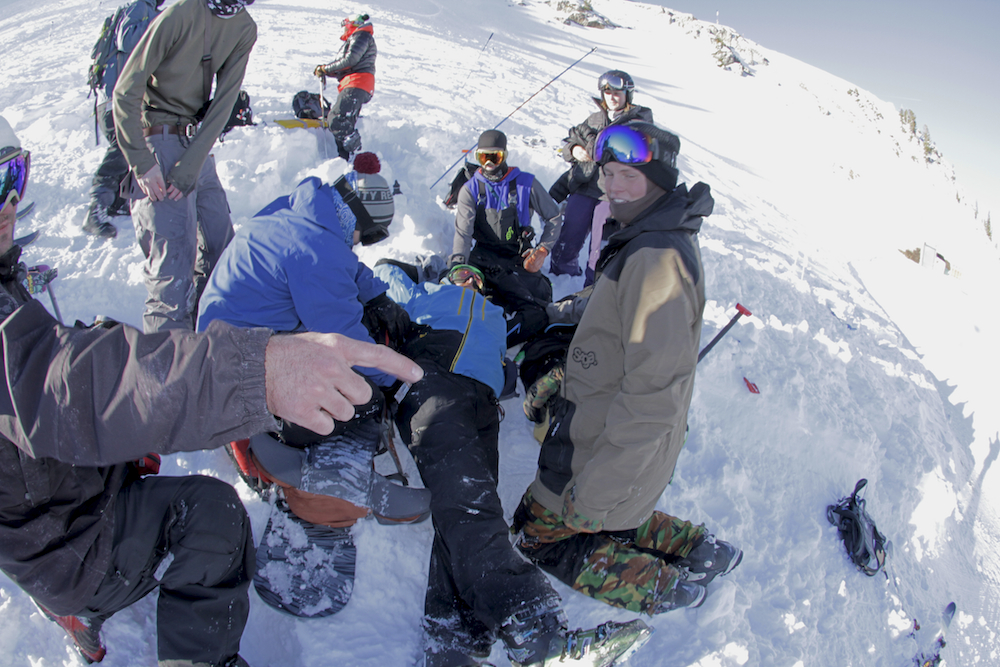 Since they hadn't done a thorough enough head to toe evaluation and hadn't checked injuries to the spinal cord completely, Ian faked a broken back when the crew tried to left him by the shoulders and walk him to safety. With no feeling or movement below the legs, the crew snapped into overdrive mode. Dustin instructed Dan to take the bindings off of a snowboard and turn it into a back board with a pair of backpacks for comfort while he barked for Daniel Tisi to clear a landing zone for the rescue helicopter, which was now fifteen minutes away. Ryan Dunfee photo. 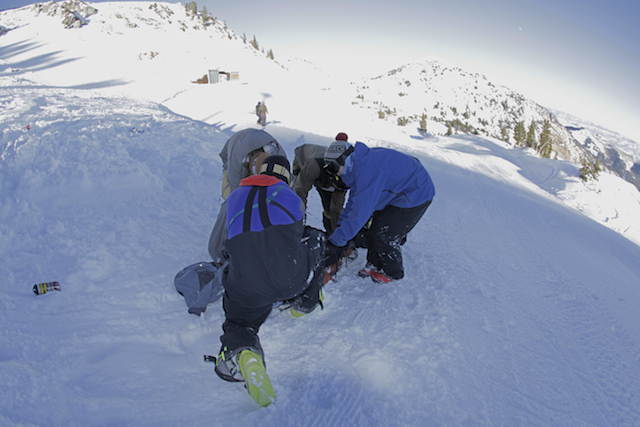 After building a stable back board and safely moving Ian onto it, the crew inched him down towards the LZ. In the chaos of the second injury, the crew neglected to gather all the equipment together and secure it so the rotor wash from the helicopter didn't blow it awayor potentially even rip it up into the rotors. On the whole, a pretty solid rescue, though. 20 minutes from the start to the final load into the rescue helicopter - pretty quick if your life is depending on it. Ryan Dunfee photo. 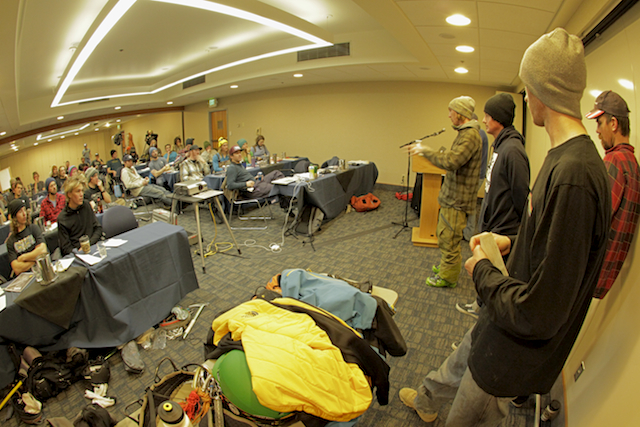 Back in the classroom, the group observers debriefed about what went well and what didn't. For our group, the key lesson was taking five minutes at the top of the ridge to calm down, make a plan, assign one or two beacon searchers while the rest readied their probes and shovels for the dig, and ensure that there wasn't a risk of a secondary avalanche that might entrain the rescue crew. Even at the highest levels of the sport, you have to stay 100% humble in order to be truly effective in negotiating and skiing the backcountry and being able to handle the situation when something goes wrong, and even guys like Sage and Ian are fully down to earth when it comes to these critical skills. Ryan Dunfee photo. 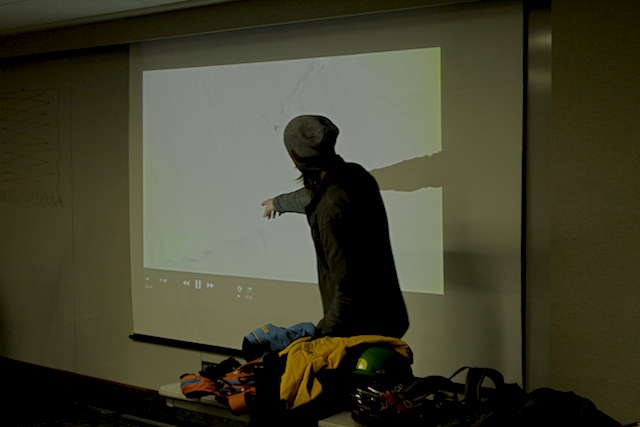 The final day of IPRW concluded with a workshop classic - the Defend My Line section - in which TGR athletes review the film of a run in Alaska that they screwed up, explain what went wrong, defend their decision-making process that led them to make the decisions they did, and explain what they'd do differently next time. Here Todd Ligare explains a commiting line he skied last winter above two sets of bergschrund (crevasses that form at the base of a peak when the moving glacier below separates from the stagnat mountain above). Todd fell right above the first bergshrund but recovered in time to ski onto the bridge over. What would he do differently next time? Dump more speed higher up on the line when the snow went from perfect Alaskan powder to a variable mix of powder, ice, and firm snow so that he'd be in better control at the bottom. Ryan Dunfee photo.

Well, that's a wrap from the International Pro Riders' Workshop here at Snowbird. A big thanks to TGR's Lead Guide, Kent Scheler, for putting together a completely custom and truly incredible curriculum for this group of highly advanced skiers and snowboarders, as well as the other instructors, from Zahan Billimoria to Dave Weber, for relaying their deep base of knowledge to the crew. And to Snowbird for hosting us and to Icedot for making this whole event happen. The company, which got its start producing helmet sensors for road bikers that detect when the brain has taken a traumatic impact and relay coordinates and an alert to loved ones and emergency services, is bringing their show to the snow world, and it seems we'll all be a little bit safer because of it.

So what's the take away from these couple days throwing ropes around, pulling fake victims out of the snow, and reviewing mistakes? That we all need knowledge and practice to be truly effective backcountry travelers, and that we need to stay humble and be constantly improving our skill sets. Whether it's beacon use, emergency response, or rope skills, these skills are not too often called into service, but when they are it can be do-or-die situation, and the practice at the beginning of the season ensures these perishable skills stay fresh and well-executed when they're needed.

The other takeaway? This isn't rocket science. They're skills that can be gained by anyone who wants to ski powder out of the gates. Simple introductory classes like a three-day Level 1 avalanche class or a single-day first aid class will go a long way - when pared with regular practice - towards allowing you to have a great time skiing safely in the backcountry. And they'll give you the power to save a life, just as it gave Griffin Post, Todd Ligare, and John Spriggs the power to save a stranger's life in the Montana backcountry last year, when things go wrong. Stay smart and stay safe out there, friends.