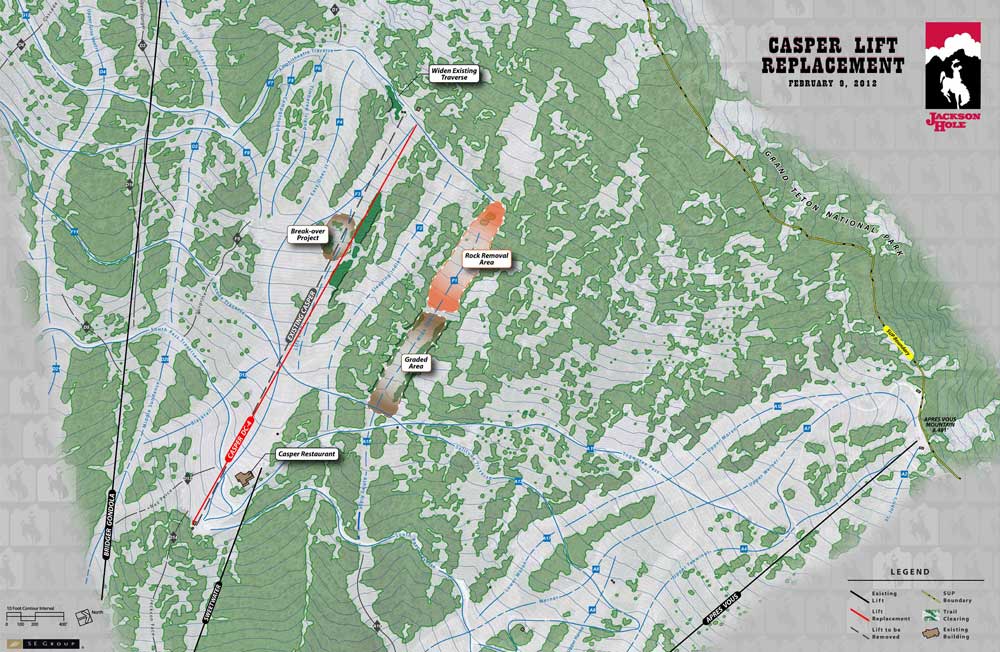 Teton Village, Wyoming - In an effort to broaden the appeal of Jackson Hole Mountain Resort (JHMR), its board of directors approved a plan that will replace the Casper triple chairlift with a new high speed 4-passenger detachable chair this summer. Along with the lift installation, the Casper trail network will be enhanced for intermediate skiing and riding with summer grooming and widening of several trails in the area.

“The Casper area is the heart of our intermediate skiing. Not only are we installing a state of the art lift but we will be doing summer grooming and expanding existing trails to make them much more attractive to intermediate skiers,” President of Jackson Hole Mountain Resort Jerry Blann said.

“To grow winter visitation we need to appeal to more intermediates,” Blann said.

This is not the only recent investment targeted for intermediates. The grooming fleet was upgraded and increased this past summer with the purchase of six new grooming vehicles, including another winch groomer. Future plans call for adding even more vehicles to the grooming fleet. Snowmaking over the past two years has been expanded and capabilities increased which has helped the resort open more terrain early in the season and also allows for more extensive grooming. Additionally, the new Marmot Lift, installed last summer, services intermediate terrain from the top of the Gondola to the base of the Thunder lift.

“This is an aggressive move by the resort and the Kemmerer Family and shows the continued willingness to invest in the resort,” Blann said. “Since taking ownership of the resort, the Family has invested over $124 million, $13 million of which has been invested since the installation of the new Tram, which was completed in December of 2008 at a cost of $31 million, These last investments were made in a down economy and shows the commitment and belief the Kemmerer’s have in Wyoming and the Jackson Hole region,” Blann said. “And all investments have been for on mountain services and improvements.”

The base of the new Casper lift will be in the same location as the current lift, however the top terminal will move northward to the opposite side of the Lift Line trail.