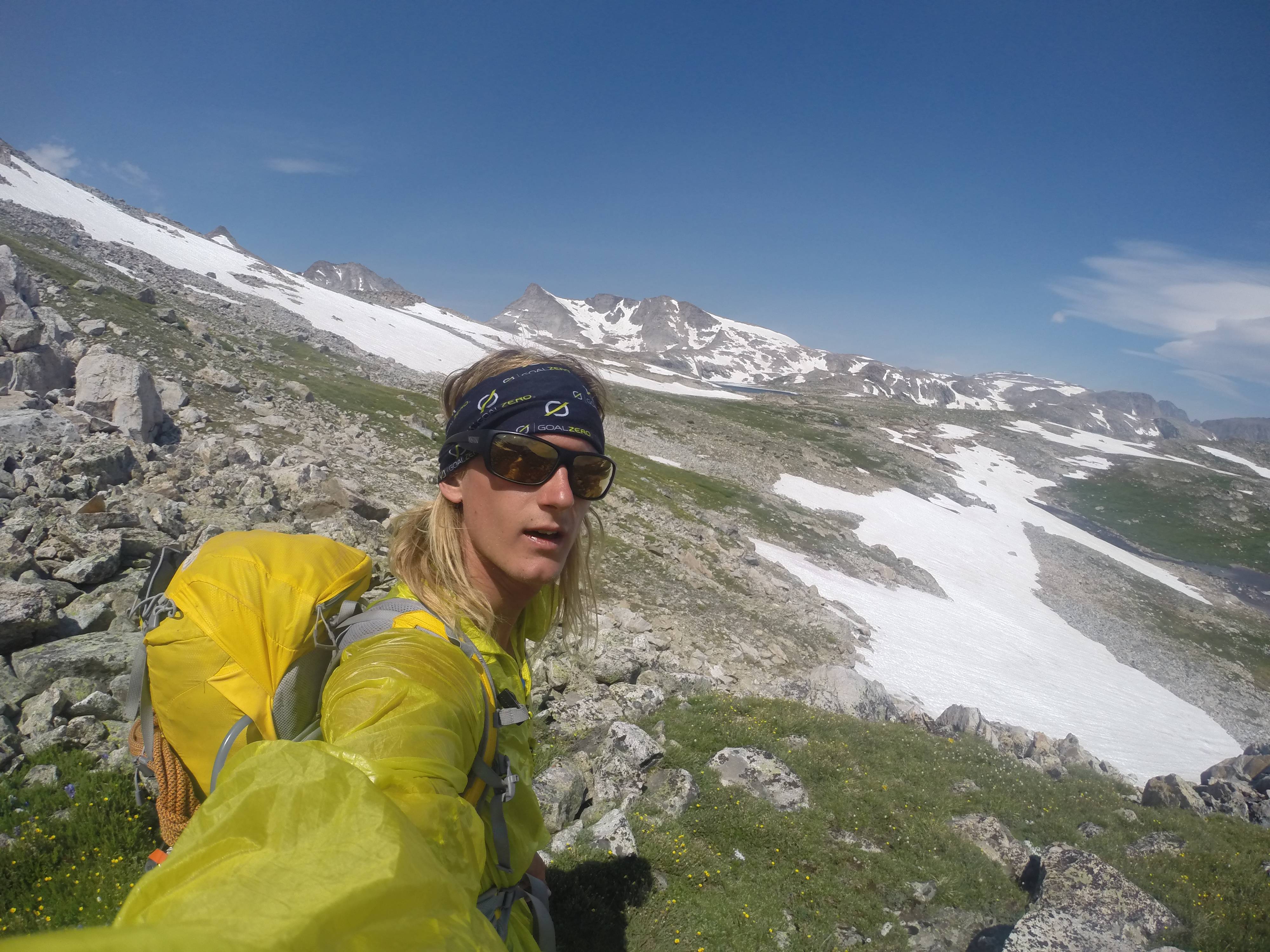 Johnny Collinson recently stopped by the TGR headquarters in Wilson, WY to check out footage from our upcoming film, Almost Ablaze. Word spread throughout the office Johnny's recent 200 mile solo across the Wind River Range. Always curious to hear what our athletes do while not shooting ski films, I sat down with Johnny to hear firsthand about his recent odyssey.

Where did the idea for this trip come from?

So basically I just got the brainchild while backpacking around back home. Just like "Oh man, it would be really fun to try and do an ass-kicker trip." It was just in my head to do 200 miles and try and run a bunch of it with all of my camping gear. My mom suggested the Wind River Range. I really had no idea if it would work or what it would be like. I pulled up a map of the Winds and realized that the range runs about 150 miles as the crow flies.

How did it go from there?

I had a plan and had a route but there was a lot of unknown to it as well. I had all this stuff in my truck. I had two bikes and drove into the south end and dropped off my backpack, all of the gear, and one of the bikes. Then went up to the north end, drove in a little dirt road, and parked my truck. I rode a second bike with a little mini backpack out to a main road and hitchhiked all the way around to the south end. I got like five different rides or something.

Any characters pick you up?

A bunch of Native Americans picked me up, which was sweet. This one guy tried to teach me how to scent a bear and how to treat a snake bite wound. He just told me to suck on the bite. I heard that was a myth but didn’t say anything. It was pretty hectic hitchhiking, but it was good to get that over with at the beginning. 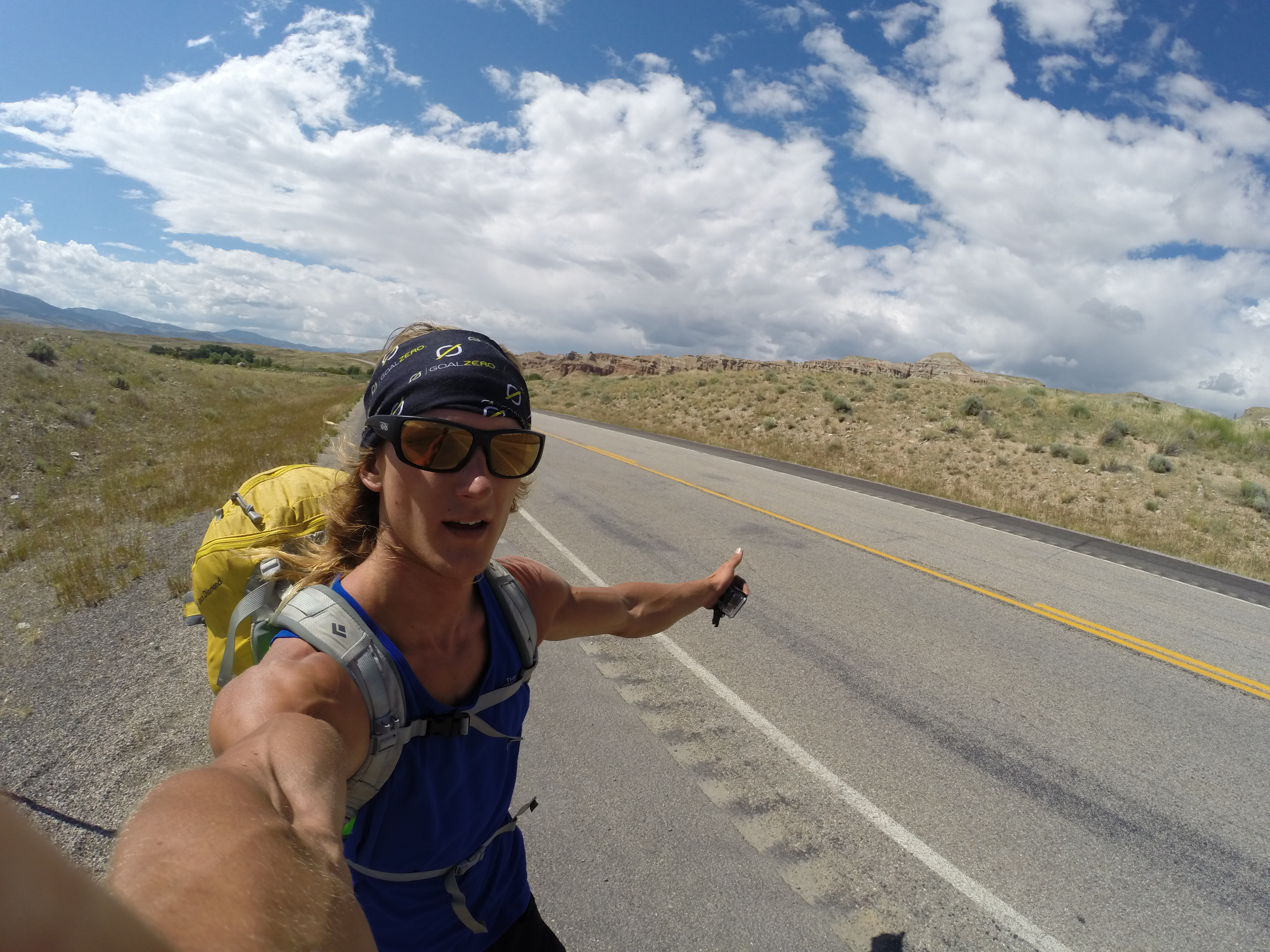 So now that you know how to treat snakebites how did the trip start?

I got to the other bike at five o’clock, and started riding into the hills. I had an epic time because I didn’t have a map for the road so I didn’t really know where I was going. I had no idea how far I had gone. Finally, it got dark. I was on this rickety old bike going down a gnarly trail with a heavy pack. I crashed into this river and was flailing all about. I thought, “Oh, fuck! What am I doing here?? I shouldn’t even be doing this . . . such a bad idea.” I called it there for the night.

Finally, I got to the place where i needed. I thought I only went 5 miles when in reality I had gone 35.

The next day, I knew I just had to keep going up that mountain and then over onto the next mountain to get to the start. I was bushwhacking around and thought that I was never going to make it. I only had 12 days of food. I was thinking that I was going to have to ration my food. The first day I barely ate anything so my blood sugar was super low. Finally, I got to the place where I needed. I thought I only went 5 miles, when in reality I had gone 35.

Did you ever think about calling the trip?

No. I finally jumped on a trail system in a pretty popular area through Cirque La Towers. It started to get more apliney up on the ridge. So I felt like I crushed it! I was like "Hell yeah, this is going to be sick!" So after that I couldn’t sleep at night because I was so excited to go to the next pass and see the next veranda. The days just flew by. I would wake up at six in the morning, travel 25-30 miles, camp out, wake up and repeat.

What would you say the crux of the solo was?

The second to last day I got onto these glaciers. The night before I had come over this pass and that was where they started. I knew I had a full day of glaciers ahead of me, but couldn’t find a place to camp. I ended up setting my tiny one-man tent on this nugget of moraine. It was super muddy ground, but I really didn’t have a choice. That night it started storming super hard. I was having all these nightmares of these glaciers melting and flooding me out because that happened once in Bolivia.

When I woke up at six and it was still raining. I decided to have a weather day and was pretty bummed. At nine I woke up with my tent filled with water from glacial melt. So I was like, "Oh shit!" and started slamming shit into my pack. There was just mud everywhere and I was super pissed off. I was like "Fuck this!" but then the clouds broke and it was sunny and beautiful.

So I tried to dry my stuff out as I was running across the glaciers. I had to some downclimbing and rappelling. I got to this place called El Z Cole that was probably the crux of the whole trip. It was a super steep glaciated 'cole on both sides.

I was just in sneakers with crampons, so they were pretty floppy. I burrowed through this cornice at the top thinking there could only be a cornice on one side. I made it through, but the glacier came all the way to the cole, so it was probably like 50 degrees of just blue ice. I thought "Fuck! I can’t go down that in my shoes."

So on the other side of the cole was this moraine. I got on it and it was just rocks on ice. You would push a car-sized boulder, and it would start sliding. I started to panic then when it started thundering and hailing. I was super high on this ridge and was like "Shit! Shit! Shit! Oh, fuck!" I was trying to calm down and not go down fast. So I was inching down while having this awful internal dialogue.

I finally got back onto the snow, but I was post holing past my waist through the snow. The water was above my ankles beneath the snow. I was wading through this thing but it was still hailing and I was like, "I can’t get out of here." Finally, I made it off the ridge and then out the next day!

What surprised you about the whole solo experience?

I think I am pretty good doing things by myself. I have done a lot of solo stuff, but it is only a one-day thing. At home I will do a thirty-mile loop. Sometimes I will get to the last five miles and would be like, "Fuck! I’ll just have Angel [Johnny's sister] pick me up." When you are alone, it is scary, because there is no one to bounce ideas off. The conversation is completely contained within yourself. I would think this is the right thing to do, but wouldn’t want to do it. It was epic to try and figure it out. It was just full-on commitment the whole time. It was scary but a super good experience. Overall I was pretty proud of myself.