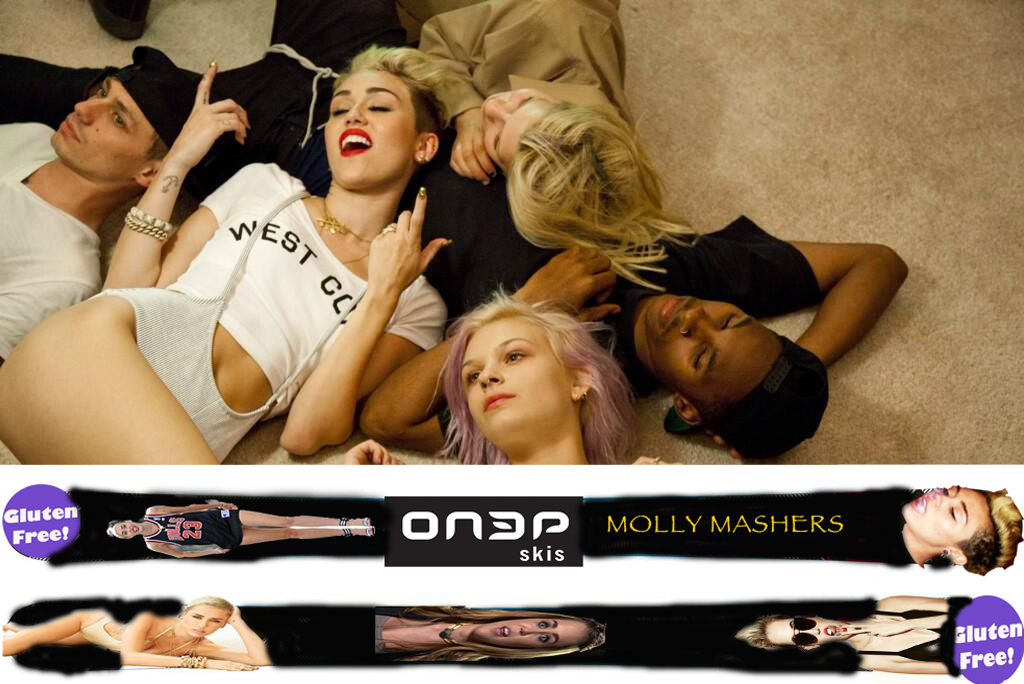 PORTLAND—ON3P Skis caused quite a stir in the Instagram community today when they announced the creation of the world’s first gluten free ski. The all-new Molly Masher Miley Cyrus pro model officially establishes ON3P as the current leader of most-hip-indy-company, or, whatever.

“We’re going to drink until we can’t wash the PBR out of our mustaches,” exclaims Team Manager/Twerk Enthusiast Sam Caylor. “Not only did we make a ski that the exploding population of celiacs in the U.S. can finally use, but we also really defined what kind of hip we are.”

According to Caylor, ON3P’s “quirky-yet-grungy-tree-jibbing-type” hip often gets confused with other types of hip such as Surface’s “distant-yet-thoughtful-stares-due-to-tight-pants-type” hip or Moment’s “What-the-hell-is-a-Reno-type” hip.

Miley Cyrus states that she is also excited to join the ON3P team.

“Going gluten-free has given me the body and complexion I’ve always dreamed of,” states Cyrus. “I want to ski, but I can’t let it ruin my life. ON3P is really making a contribution to the skiing community by keeping skiers from becoming fat, pimply, unattractive human beings.”

Cyrus states that she was first drawn to the brand by their unique graphic choices. “When I saw the grizzlycorns, the rainbows, and the dream catchers, I knew we were on a lot of the same things. And they’re from Portland, on that reason alone I knew my skis would be gluten-free and vegan. Now that’s more hip than a gold grill”

“Miley fits our profile because she makes absolutely no sense. I mean, come on, she doesn’t even ski,” adds Caylor.

According to Materials Manager Kip Kirol, it took months of product development to make the first pair of Molly Mashers.

“We experimented with a lot of things: sweeping the shop floor, keeping sandwiches out of the production area, minimizing beer spillage, and even looking for gluten-free ski materials. As it turns out, all of them are already gluten-free,” states Kirol.

The Molly Mashers’ unique, gluten-free construction will come in the form of a 113-millimeter-waisted ski with rocker, camber, top sheets, sidewalls, edges, a core, some resin, and convex bases.

“That’s one thing Miley and I have in common,” says Caylor. “We both like the way round bottoms move.”

In addition to being sold at merch tables at Miley’s upcoming concerts, the Molly Mashers will also be distributed at Hot Topic, Wal-Mart, and Whole Foods.

“We needed to do something to make up for the GMO scandal,” admits Whole Foods Spokesperson Lonnigan Treeheart. “And if it says gluten-free on it, we can sell it for three to five times what it’s worth.”

Seeing a gaping hole in obvious market/hipness exploitation, ON3P plans to continue its commitment to other skiers with special dietary needs.

“We’re currently working on paleo, Atkins, and even sun gazer friendly skis for the masses,” states Caylor. “So if any other company thinks that they can just tap into the latest food trends, bug off. Now excuse me while I go chain smoke and think of tree taps in the spring rain.”