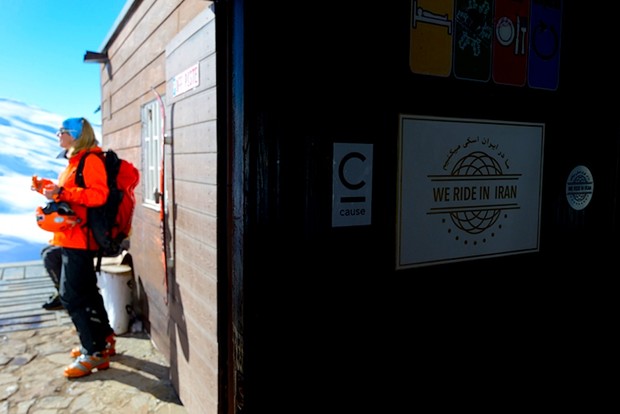 Mountain sports generate a lot of talk about going out of your comfort zone, pushing limits, and overcoming fear. What if your concerns, though, were focused less on the terrain you're riding and more on the treatment you're going to receive from the people you meet where you're traveling? Last spring, four elite, female mountain athletes from Europe went way, way out of their comfort zones to a place with a very restrictive set of behavioral standards: Iran.

RELATED: Surfing in Iran: A Story Shaped By Women 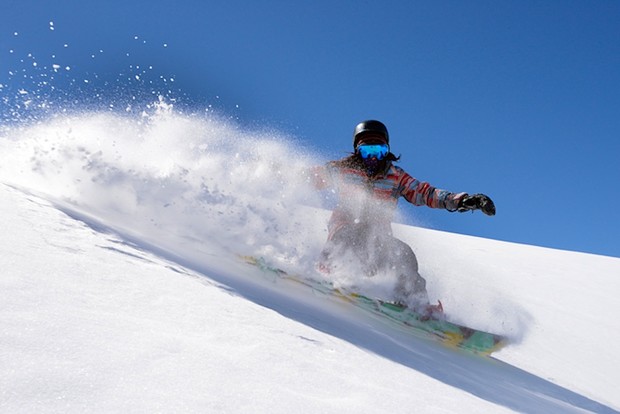 Iran's first female pro snowboarder, Seraji traveled with Irish surfer Easkey Britton and Iranian diver Shalha Yasini to surf the Sistan-Baluchistan in remote southeastern Iran. The trio, who became the first women to ever surf that region, created the film, Into the Sea, about building the surf scene in a rural area unfocused on women's participation in sports. 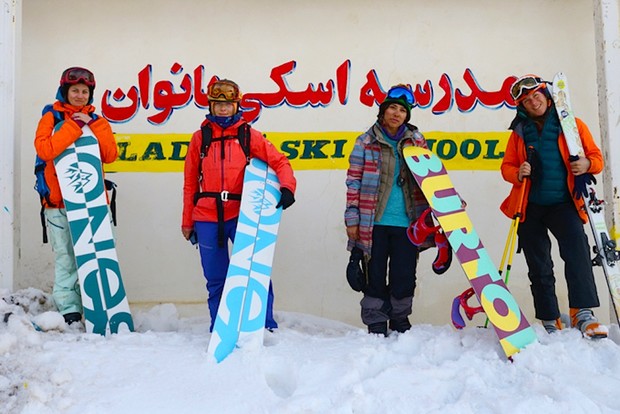 "I didn’t want to have expectations," Beucher said about her mindset going into the trip. "In Iran, they have virtue police. Women can be arrested because they’re veils are too far back on their head, wearing too much make-up, or acting a certain way. My main fear was at the airport. When we arrived, I was wondering if there was going to be a problem with our visas, or if we were going to be searched."

"My main concern was whether I was going to ask for a press visa," she explains. "I usually travel with two cameras, two lenses, and my laptop. I only brought one camera and two lenses. I wondered if I should I keep my camera bag or empty it of its contents. At the airport, nothing happened. It was no problem. After that, I knew things would be easier because we would be in the mountains." 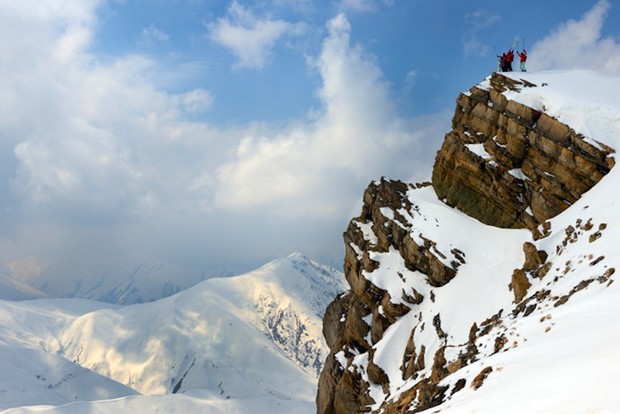 On top of a platform at 4,000m. Vanessa Beucher photo.

Despite the smooth sailing Beucher experienced, she wasn't entirely off-base in being concerned about getting searched. The Islamic Republic of Iran maintains intense publication restrictions for journalists and social media users. The government blocks nearly 5 million websites and actively filters the kind of web content Iranian citizens can view.

The situations women face as citizens of Iran are even more challenging. Women must observe Islamic dress code in public, wearing a veil that covers most of their hair and dressing modestly. Consequences for violating this dress code can be severe, depending where you are traveling. Between 2003 and 2013, nearly 30,000 women were arrested for being improperly veiled. The penalty ranges from 10 days to two months in prison, or a fine of up to 500,000 rials.

Buecher explains that this restriction is more casual in the mountains. Men and women, both covered by their beanies and helmets, interact in normal way. They enjoy social freedoms uncommon in Tehran and some of the rural, old-school areas of Iran. Snowboarding, therefore, is not only a culturally accepted activity. It's a growing trend.

Dress codes aside, questionable human rights violations against women aren't uncommon. For example, the UN Secretary General reported last February that two-thirds of married women have been domestically abused by their husbands. An Iranian woman can be legally married as young as 13, and can only divorce her husbands if she proves he represents a direct threat to her life. Her spouse can also legally limit her employment opportunities.

"The thing about Iran is it's a huge country," Beucher says. "There are a lot of people, and their society is very complex. Not all Iranian women have the same experience. There are social classes. I would say, in general, things have changed in a good way over the last 10 to 15 years. Before [former president] Ahmadinejad, men and women had to ski on separate slopes."

"A lot of people there don't give a shit about religion," Beucher says about the Iranians she met in the mountains. "They're so far away from it. The realities of Iran are so far from the perception. We don't want to be patronizing [traveling there to snowboard]. We didn't teach them how to ride. They listen to the same music. They're super-open. Their country just has a special history." 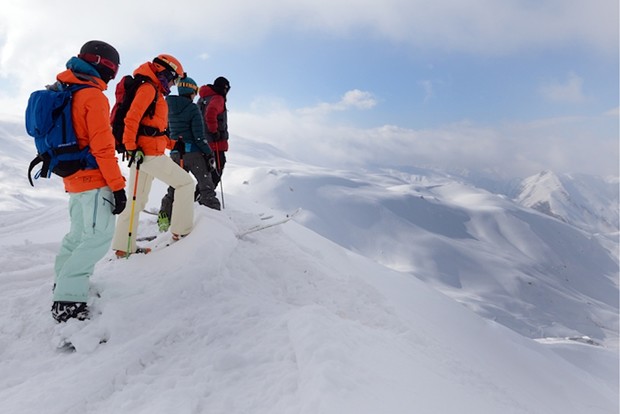 Beucher describes multiple encounters with men, ranging in age from their 20s to 40s, who were respectfully curious about this group of foreign female snowboarders ripping big lines around Dizin. With all of their concerns about interactions between men and women, Lecomte, Chekualeva, Arsova, and Beucher all discussed being pleasantly surprised how open the mountain culture was and how talented the female skiers and snowboarders were.

Each member of Beucher's all-female team came from a different country and carried a different skillset, essential for traveling through the avalanche-prone Dizin backcountry. Iran, like many countries with nascent freeride scenes, doesn't have a widespread mountain guide network, a avalanche forecasting center, or a well-developed rescue system. Dizin sits at almost 12,000 feet and features an incredibly dry, continental snowpack, compounding the risk of backcountry travel.

The resort offers a very cramped, slow-moving gondola ride to high-altitude sidecountry. Oksana Chekualeva talked about how these late-1970s gondola rides brought some of the trip's craziest complications. The group had to carry their skis within the tiny gondola cars. Some days the resort didn't run the gondola at all because it ran out of electricity.

Accompanied by two Iranian guides, the group dropped the backside of Mount Tochal, part of the Alborz range, just north of Tehran. Estelle Lecomte, who Beucher called the group's expert in line choice, said the monstrous 6,000-foot descent was the highlight of their trip. Spurred by the excitement of the huge descent, the group planned to follow up the tour with a descent of Mount Damavand, an 18,000-foot volcano. Ultimately, though, they called the tour off because the avalanche danger was too high.

These complications, perhaps more than stark culture differences they experienced, represent the greatest obstacles to the small-but-growing freeride scene in the mountains north of Tehran.

"You could see how the freeride scene could develop," Beucher explains. "Like everyone else, Iranian people are daring. People have money there. Only thing they need there is a training system to become a mountain guide and to learn what it takes evolve in the mountains. For some Iranians, they travel abroad and they have money. But no so easy for all of them to travel and ski out of Iran." 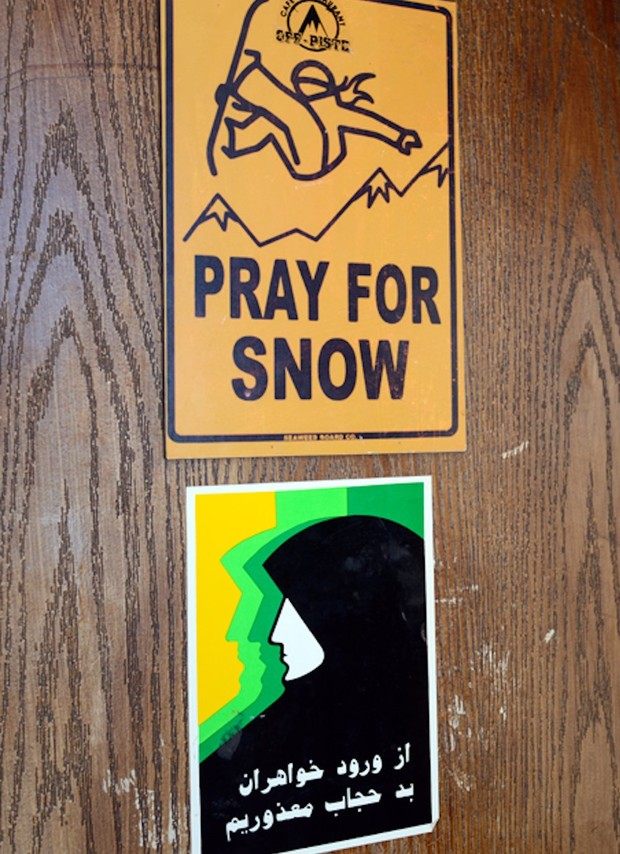