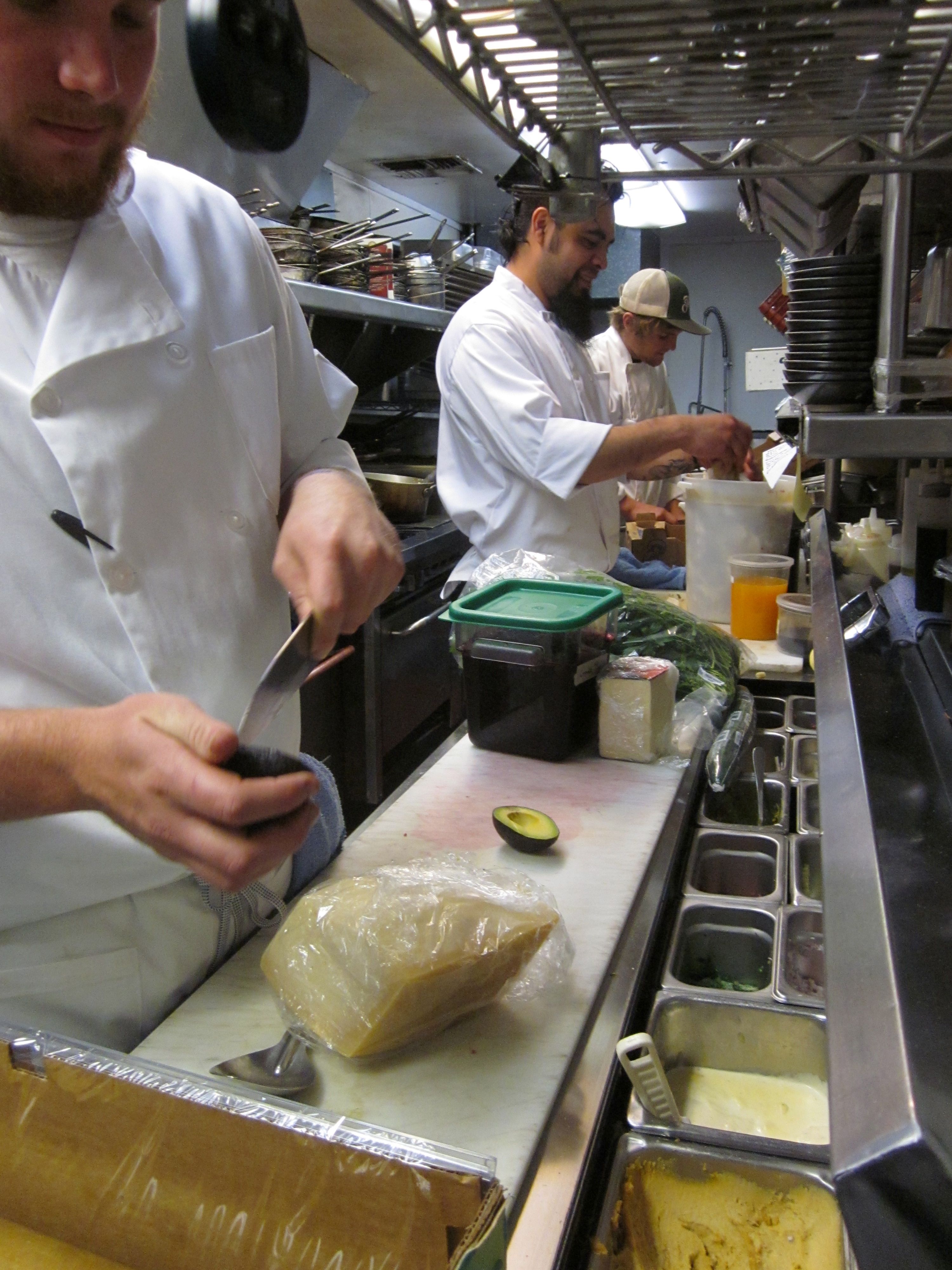 Restaurants offer one of the highest concentrations of shit jobs in any mountain town. The least glamorous job at a restaurant is the dishwasher, hands down. Since I’ve never met a dishwasher that speaks English, or skis, I’m starting this series with the second least glamorous restaurant job: line cook. Like any job, there are pros and cons, good and bad, strikes and gutters.

One of the finer points of working in a kitchen is the schedule, as long as you work the dinner shift. If you work breakfast or lunch you are blowing it and probably don’t get to ski that much so this doesn’t really apply. Depending on the restaurant you work at, your shift probably starts between 2 and 4 p.m. This leaves plenty of time to ski at Mt. Gnarnia before it’s tracked out, or session laps in the local backcountry.

Once at work, there is a nearly unlimited supply of food and beverages to consume. Free lunch, dinner, and drinks of any kind are a godsend for broke-ass ski bums, and as a line cook the food is at your fingertips, literally. Eating one or two meals a day at work can save you heaps of money, especially when you are forced to shop at absurdly overpriced ski town grocery stores. You can also drink iced tea, coffee, and Coca-Cola until you’re blue in the face or develop heart palpitations. Alcoholic beverages might also be part of the program, but if frowned upon by upper management, you can probably sneak a few beers in the walk-in or bribe one of the waiters with food in trade for some red wine.

As a member of the kitchen staff you don’t have to associate with the customers and therefore you can farm your goggle tan to the point of total ridiculousness. Showing up to work with helmet hair and 5 day growth because the skiing has been epic is generally no big deal. Your appearance may hurt your chances with that hot waitress, bartender, or busser, but at least you get to check them out all night at work, and sometimes they actually have to talk to you.

Working on the line, however, can be somewhat hazardous. Burns from the oven, hot pans, and fryer oil are nearly impossible to avoid and the scars on your forearms may tell the story for years. One slip with a super-sharp kitchen knife and you’re stuck wearing a finger condom or heading to the hospital for a few stitches. Your mental health may also be in jeopardy listening to the gratuitous use of words like fire, all day, and dragging. Prepping for and making the same 30 dishes day after day could be enough to drive any person insane.

Working in a confined space next to an oven, stove, and deep fat fryer isn’t for the weak at heart, it is often really, really hot. You’ll also smell like food, or a fryer, and be covered in airborne grease particles until you take a shower, and sometimes longer. Most of the free food you consume at work is terrible for you and combined with your work environment may cause you to break out like a prepubescent teen. Oh, and that waitress, the one you hit on everyday, isn’t interested because you’re broke and you constantly smell like french fries. Not to mention the fact that anytime anything goes wrong in the restaurant it’s your fault and the uppity wait staff and front-house management are constantly staring at you and asking where the food for table 12 is.

That being said, working the line allows you to ski everyday, sleep in if you want, and party like a rock star. No one knows you make 11 bucks an hour when you’re rubbing elbows with local pros in the lift line or smiling ear to ear with a powder mustache. And that guy with three screaming kids, a nagging wife, a $500,000 ski condo, and an $80,000 SUV, whose dinner you made last night is jealous of you. Not because he wishes he was broke, but because he wishes he could live a responsibility free life where skiing is the priority. Because after all, in the end he who has the most fun wins, and at least you’re not washing dishes.