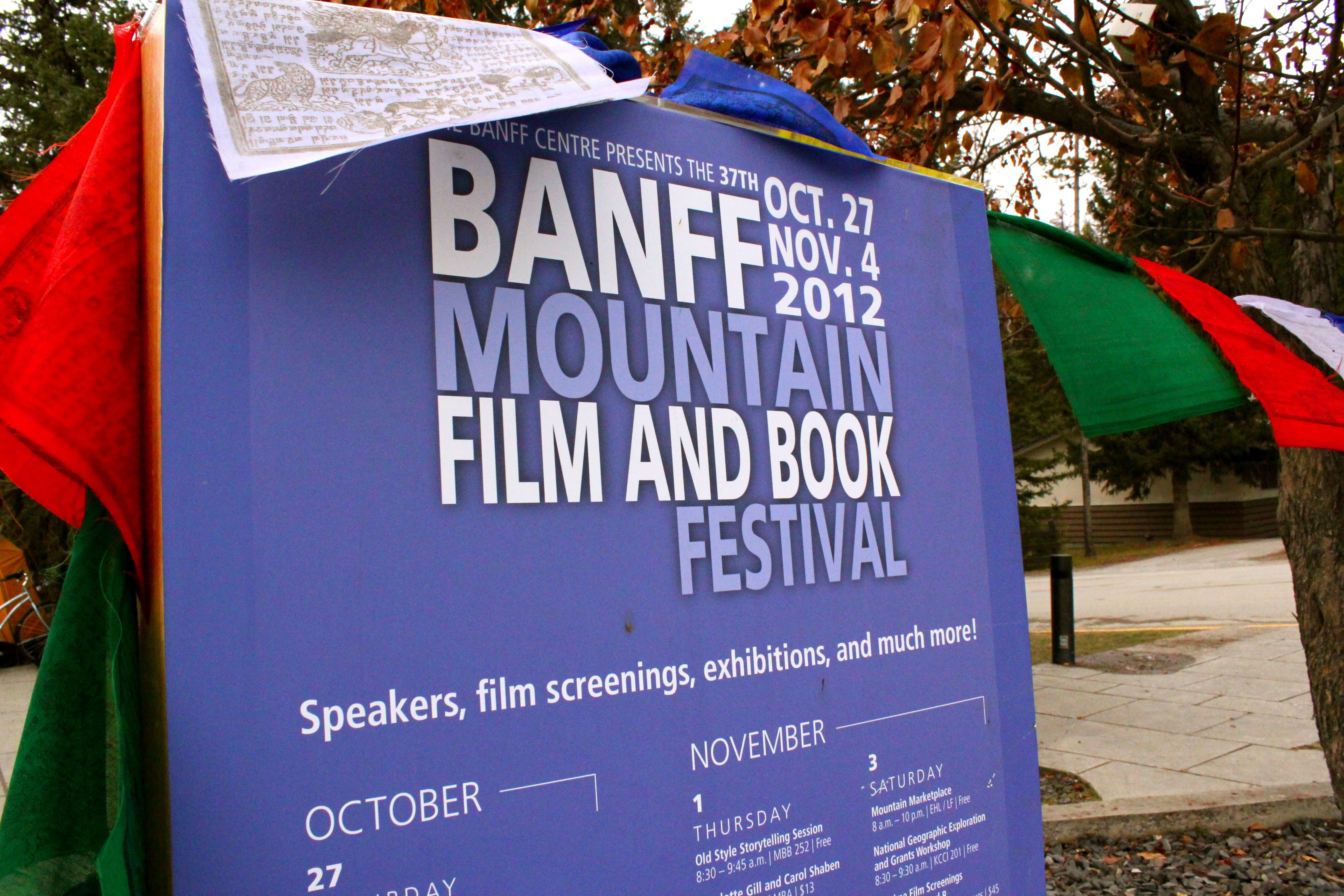 The film and book festival took place from October 27-November 4 with the selected World Tour films going on tour this week.

We went to the 2012 Banff Film Festival to find adventure stories in their most refined form — the exclusive festival selected film. With the Outdoor Research tiny house in tow, Zack Giffin and myself set out on the Trans Canada Highway toward Banff with hopes of sharing our little house, a preface to our own tale of winter gypsy, ski-bumming lives.

From campfires to Facebook, stories flow through every facet of human existence. For the outdoor community the most organic communication of these narratives happens out on the skin track, in line for the tram, or in the grocery store aisle after a day of eyeball-blinding faceshots. Sometimes they’re told through social media streams and magazine articles, and other times through films. There’s always something to be shared. 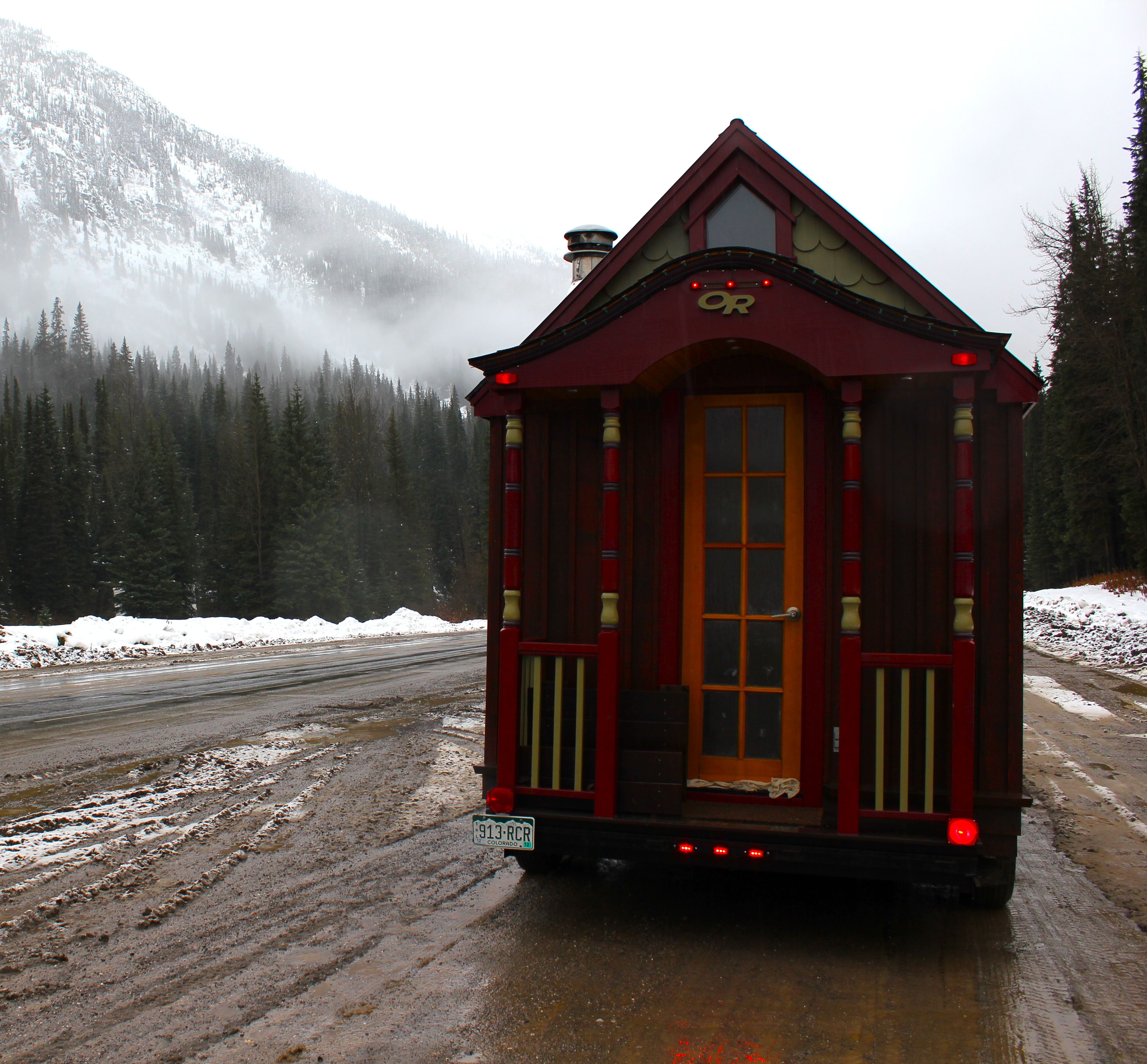 The tiny house on the top of Roger's Pass en route to Banff via a one night stop in Revelstoke. There is snow in the mountains!

This year in Banff, festival-goers learned the legend of Mt. Everest, through the mountain’s living Bard, Wade Davis. David Suzuki’s dialogue reminded us that environmental degradation is not a myth. Lynsey Dyer shared her journey, as one of skiing’s most notable female stars, and her fight to ski beyond the boundaries of a sex icon. JSheJumps.org showed the audience what’s required to go 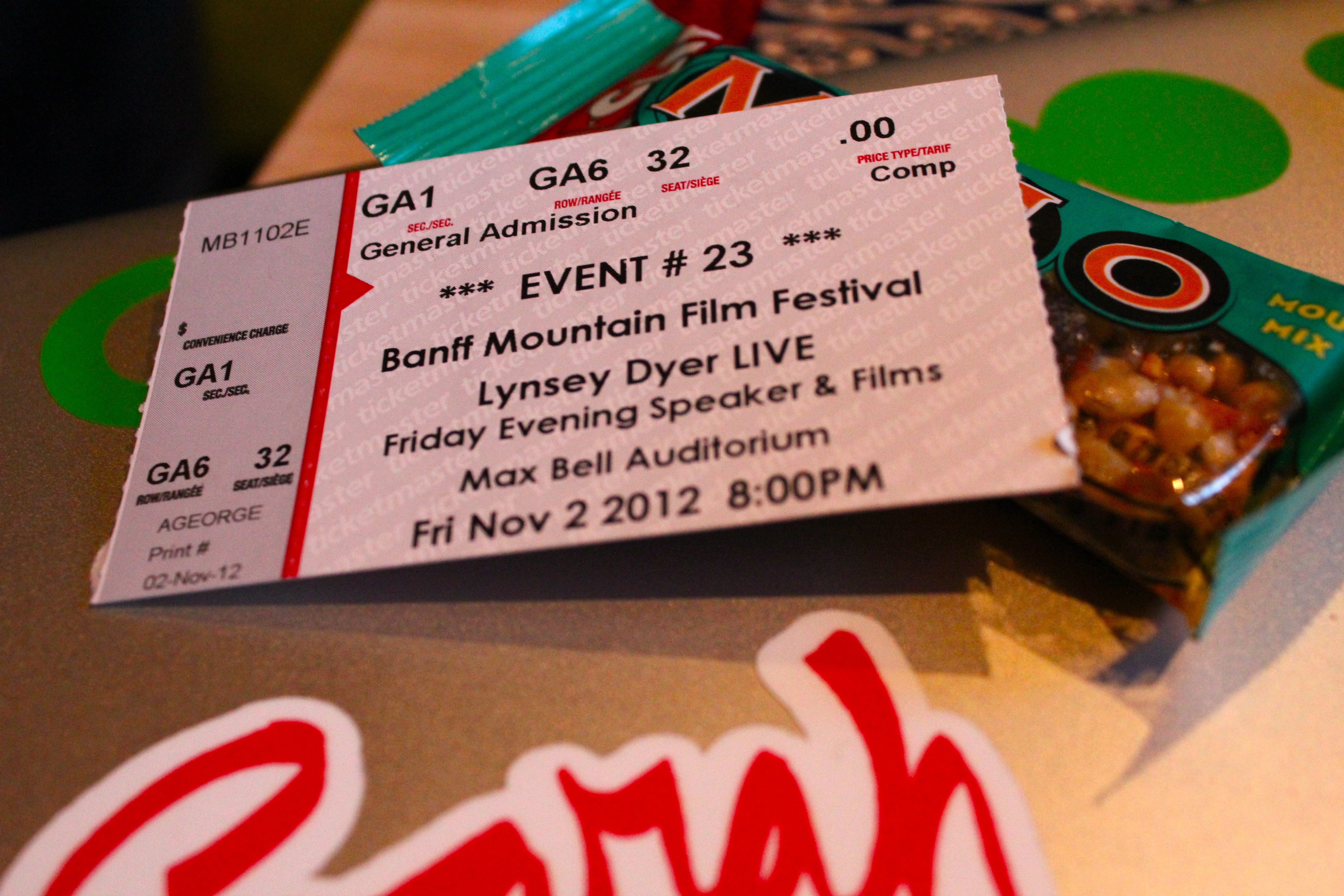 I watched as a twelve-year old girl almost fell from the edge of her seat watching Lynsey's presentation so intensely. Lynsey shared her story of pushing the concept of skiing like a girl and what she's doing now with SheJumps.org, a non-profit geared to get women outdoors.

Outside of skiing, there was kayaking (Of Souls + Water: The Shapeshifter is a must-see), climbing (Alex Honnold is still his own sub-species of superhuman as seen in Reel Rock 7: Honnold 3.0) and films about humans enduring cold, harsh, desolate places (see Crossing the Ice, the festival’s hat-trick winning film, which took home top honors).

Beyond the films and presentations, there were parties, workshops, and the communication that happens when you raise a full beer on the dance floor to an acquaintance across the room at two in the morning. In many ways, the festival was a connection overload, similar to your Facebook homepage on Election Day. Engagement was happening at every moment, in every theatre, and between people from all over the world. It was something I learned in a National Geographic workshop about social media called “living out loud.” 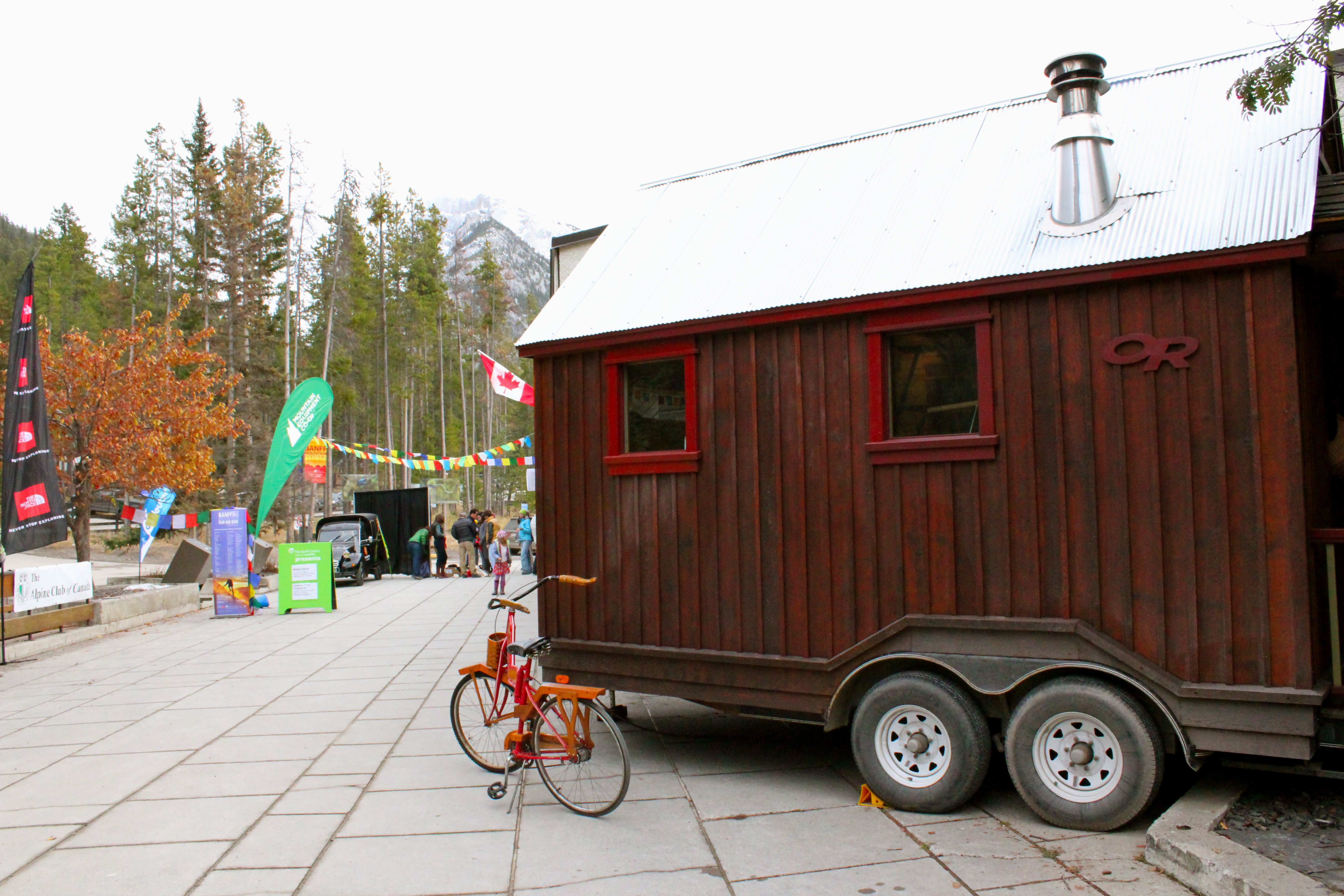 Yup. They let us park the tiny house right outside the main theatre. We're pretty sure they didn't think we'd be sleeping in it during the festival, but of course we did. It's our home after all.

With Facebook (which accounts for a whopping 20 percent of all page views on the Internet), Instagram, and Twitter, human connection and the capacity for storytelling has gone far beyond the reach of how many people can comfortably fit around a single campfire. Nowadays, we’ve got the whole world in our circle. As explained in the National Geographic workshop, we’ve become social objects. Anything you say, do, or anywhere you go, can become a social object — something to be shared and talked about. With that, humans are living, extroverted or not, out loud.

As I watched Wade Davis amaze the audience with his Encyclopedic knowledge of every event and person associated with the conquest of Everest, I remembered the beer we enjoyed in the tiny house and his interest in our ski bum adventures. I was grateful to be living out loud, telling our ski story just by showing up in Banff.

To everyone who attended the festival this year — filmmakers, athletes, outdoor gear companies, and artists — thank you for sharing. The Banff Film festival goes beyond showing and seeing films. It’s a social conversation that never ends and seamlessly blends outdoor life with the pursuit of art through film, books, and conversation. And for that, we’ll see you next year. 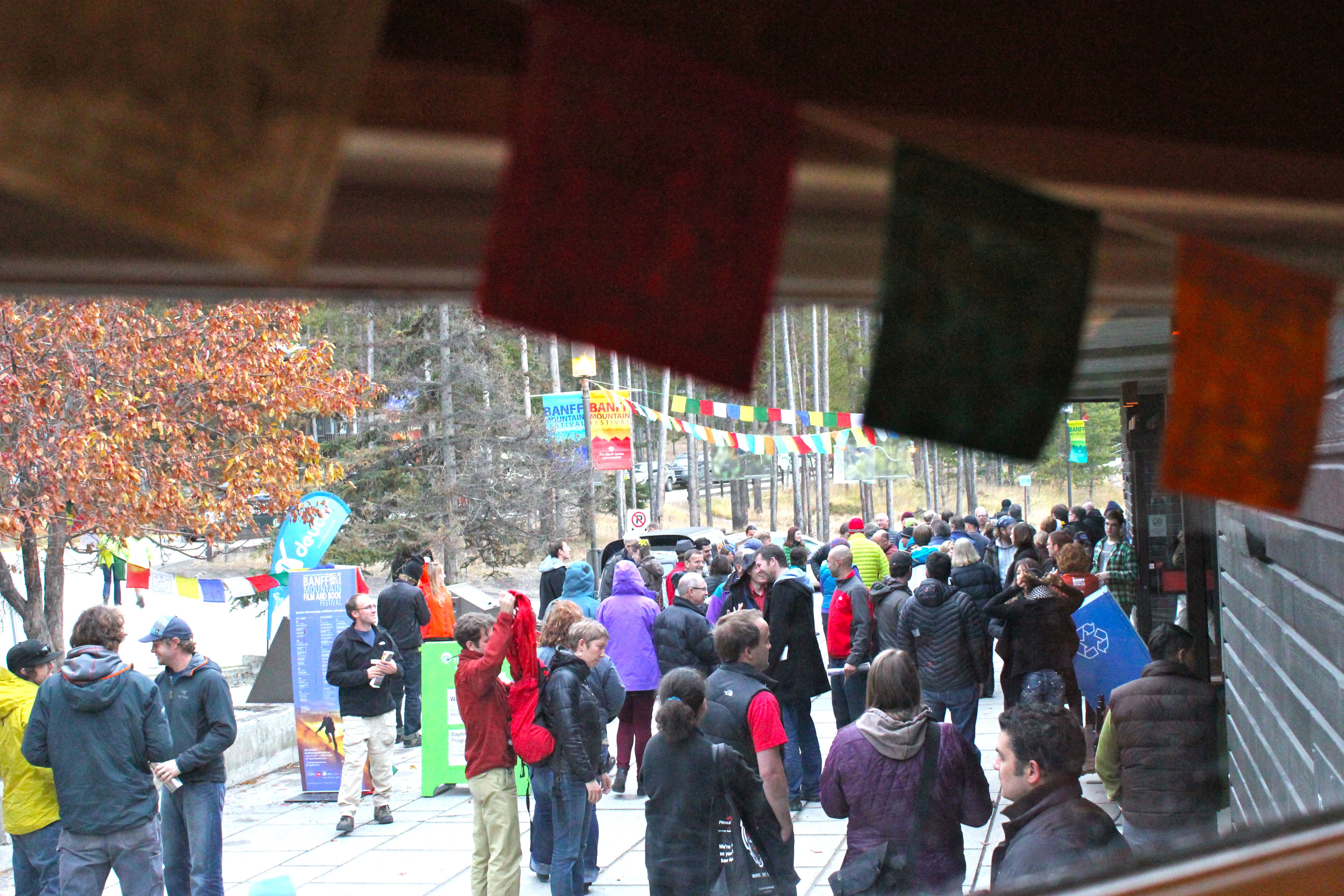 We woke up to this many days in a row. People outside during intermission and us in the house in our pajamas.