May 5th is All About Lady Shred: IMBA Launches #WomensMTBday 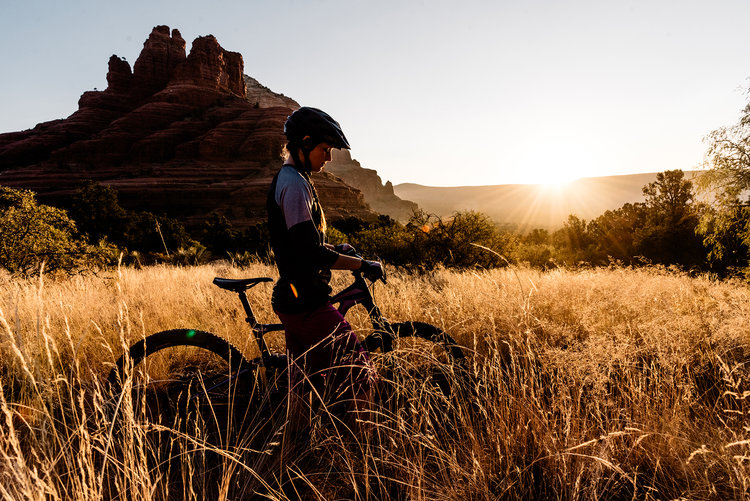 The May 5th event—#womensmtbday—will be largely social media driven to encourage more women in the sport. Katie Lozancich Photo

The day which will always be held on the first Saturday in May moving forward, was the brainchild of IMBA’s first ever women’s conference—Uprising. The day—for both men and women—seeks to celebrate the female community in the sport.

What’s unique about this day is the fact that IMBA doesn’t do clinics or women’s only rides, but focuses on education, advocacy, and community building. So TGR caught up with a few IMBA’s ladies—Eleanor Blick the Communication Manager, Aimee Ross the Director of Brand & Events, and Katherine Fuller the Marketing Director—to learn why this new day is such an important initiative for the Association. 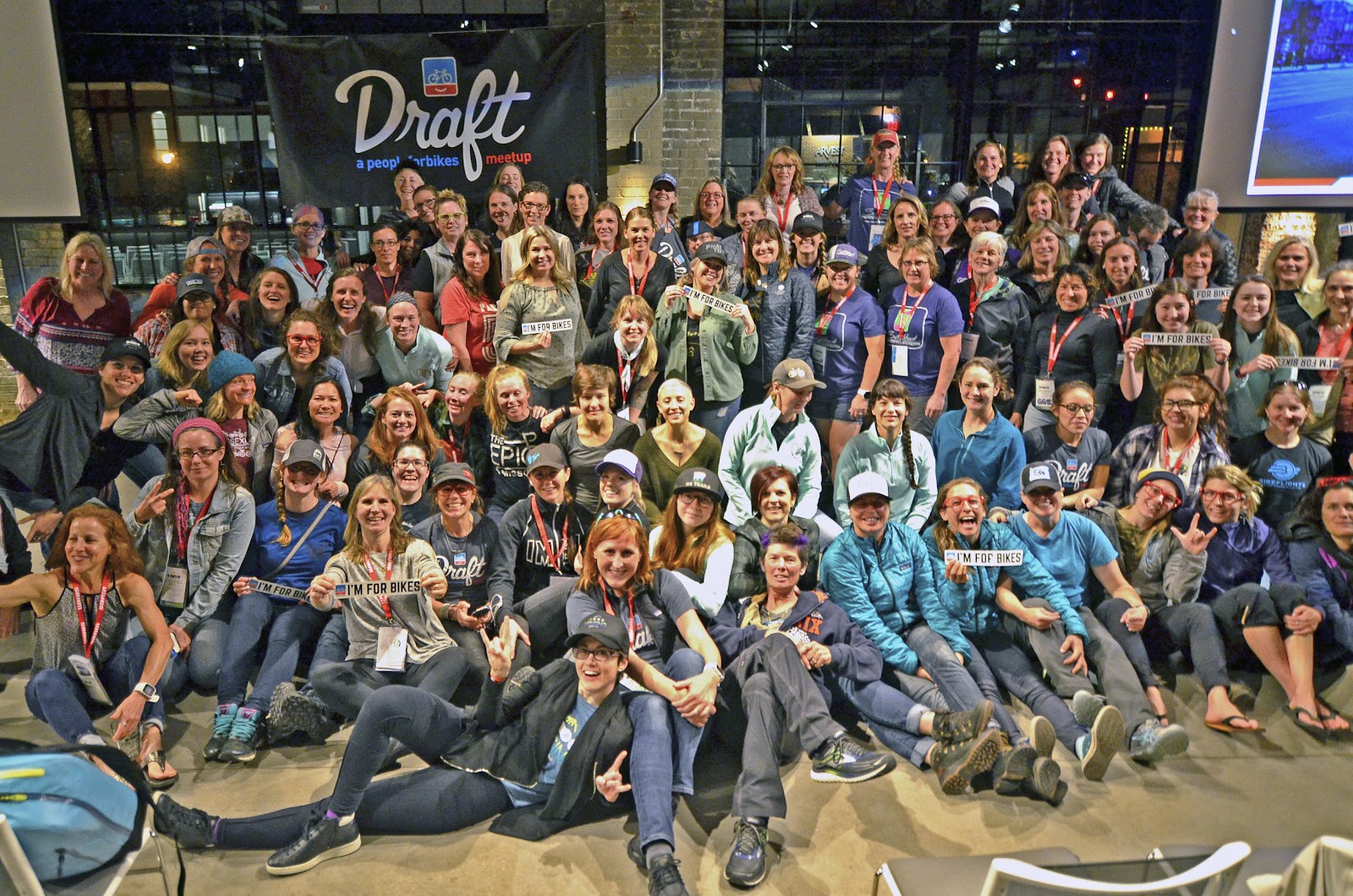 UPRISING was a collaborative event held in March to bring together female mountain bike leader from all across the U.S. IMBA Photo

Can you tell us a bit more about the Uprising event?

AR: The purpose behind UPRISING was for IMBA to understand what it is specifically that women are looking for. About a year ago we embarked on a project that basically outlined for us a huge gap that we were missing with the women’s market. We have had a lot of women come to IMBA looking for resources and we realized we weren’t able to provide them with.

So taking that thought of “we need to address this need” as a catalyst, the point of Uprising was to figure out what those needs were. 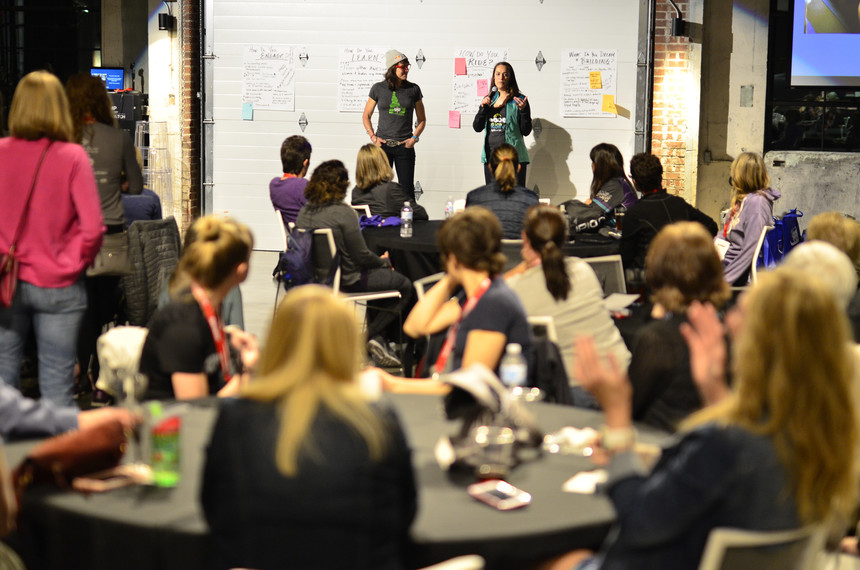 Out of 100 suggestions to bring more women into the sport, Women’s MTB day was picked as the most creative. IMBA Photo

Who attended the event?

AR: The event was held in Bentonville, Arkansas, and the majority of people were females highly engaged in the industry. We also had a handful of newer mountain bikers—but for the most part, it was people who had been in the sport looking to facilitate more opportunities for their community or just to start something on their own. 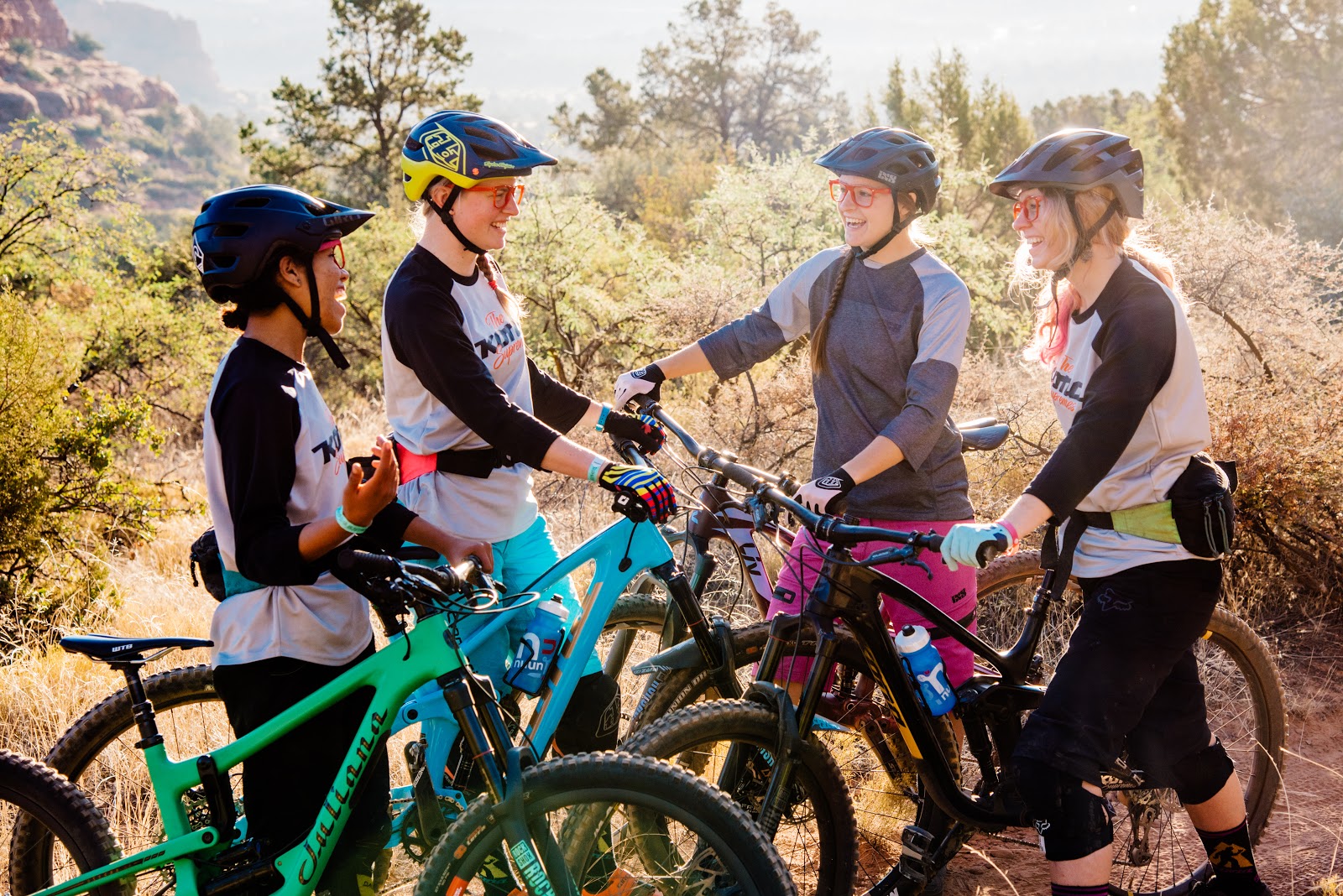 The premise surrounding the day is straightforward: just get out and do something. Whether it be going on a ride with your gal pals or a boyfriend introducing his girlfriend to the sport—it all makes a difference. Katie Lozancich Photo

Was the Women’s MTB Day the biggest byproduct of the event?

For us, in particular, we also looked at the event as such big resource of information. Information that we captured, that is now being used to build out our website. With the goal of increasing the variety of resources, we have for these kinds of women.

Starting the event we asked them a series of questions in regards to building, riding, learning, and engaging—the pillars we focused our efforts around. We based our questions on these foundational ideas and captured a lot of relevant information. Internally this a huge step forward for IMBA—especially with the direction we want to go.

KF: The point about UPRISING and creation of this day illustrates a recognition that this has been a big audience we’ve been missing and undeserving.

The main of the idea of this event was not IMBA saying ‘we know exactly what to do’ but instead we need to be involved with this space and we need to tap into our communities and actually see what they need. Everything was generated from this group of 150 women and It’s definitely going to be an ongoing project. 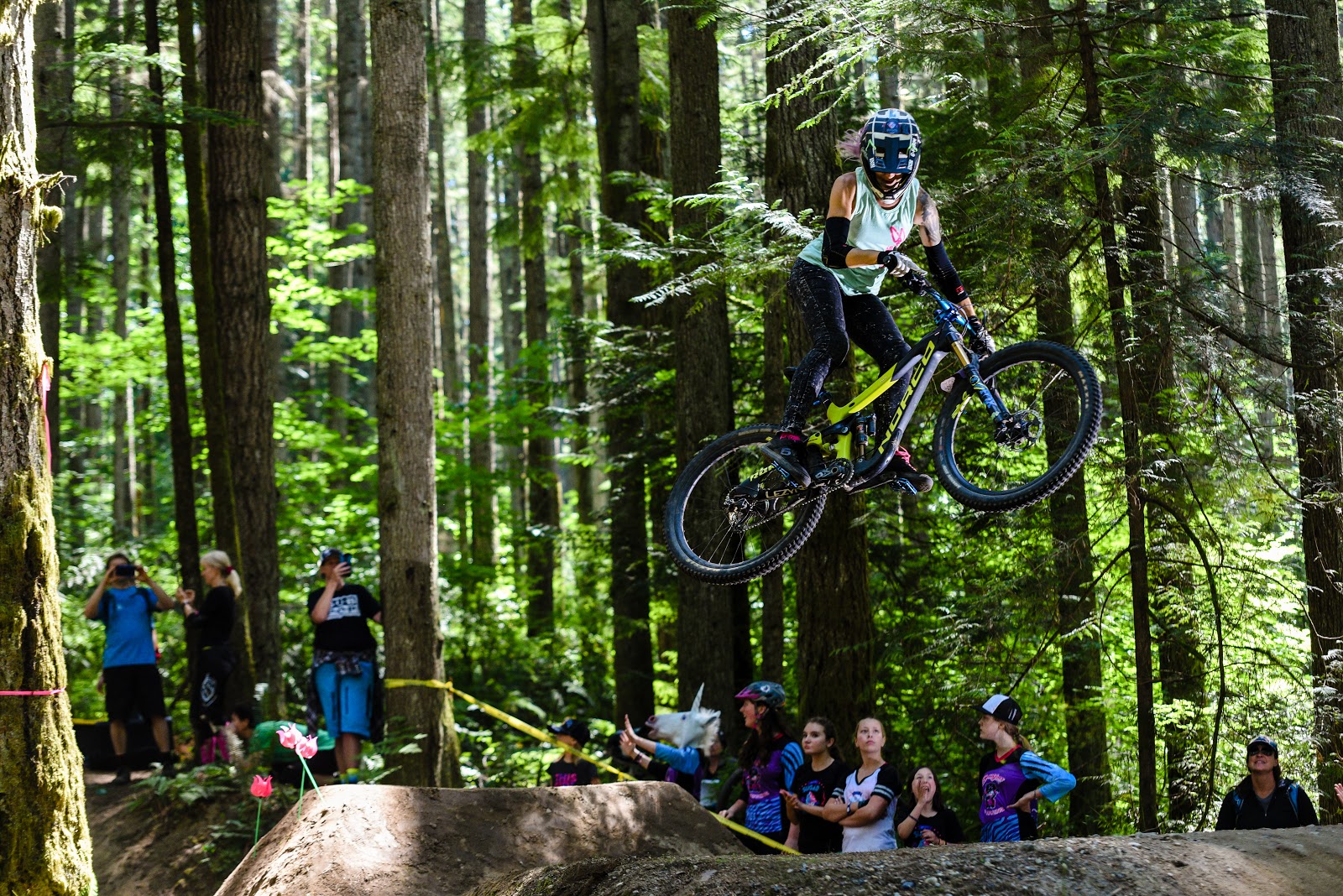 Women are present in all facets of this sport—XC, downhill, freeride, or in working in the industry itself—so it’s time for the media to reflect that. Katie Lozancich Photo

How did the idea originate for #womensmtbday?

AR: Elena Caldwell from SRAM and Jen Boldry from People For Bikes came to me with the idea of ‘how do we get more women on bikes?’ I asked her how she wanted to approach the question and she suggested doing a raffle for the most creative way to get women out riding. We put together this raffle on the spot and asked these 150 women to share their ideas.

Andree Sanders who runs Trips for Kids in New York came up with this idea of an all women’s mtb day and decided to run with it. It also made sense because we already have our Take a Kid Mountain Biking initiative and we actually talked about trying to do this in the past. Now seems like the right time, and we’re hoping for it become congressionally designated like Take a Kid Mountain Biking Day.

As it grows we want to be able to build a toolkit for communities to execute the day. Particularly we’ve got a lot of questions from male riders asking ‘how can we be of a support for women in the sport?’ The answer is many ways—it’s not just a bunch of females coming together and going riding that day. It also means husbands bringing their spouse to the trail or a dad to take his daughter out—this should be inclusive.

Local organizations and individuals are encouraged to use the day as a catalyst to create grassroots engagement. Katie Lozancich Photo

The event plans to be executed heavily through social media, what was the reasoning behind that idea?

KF: One of the things we emphasized at UPRISING was the ‘do something’ principle. In order to get involved in your community or mountain biking, you don’t have come up with this huge plan. You can just go out and do something—even something small like taking a girlfriend out for a ride. Small things like this will, in turn, will lead to more change—especially if it’s shared on social media.

For this year’s women’s mountain biking day, that was the underlying motivation for the event. We just want to let it grow organically and see how it does, so we can make it even better the following years.

I also I’ve worked for a time within media and I heard this sentiment all the time by women in regards to the sport— ‘I don’t see myself’. If you look at the majority of content—print, video, social media, or advertisements—it’s mostly men. Rad shredder dudes are great, but it narrows the spectrum. So we’re hoping that this visual content will show women that there’s actually a lot of women in this sport. Athletes, women actually working in the industry, and the everyday rider. Hopefully, we can change the look and feel of the sport—not saying that what we now have is bad it’s just not very diverse. 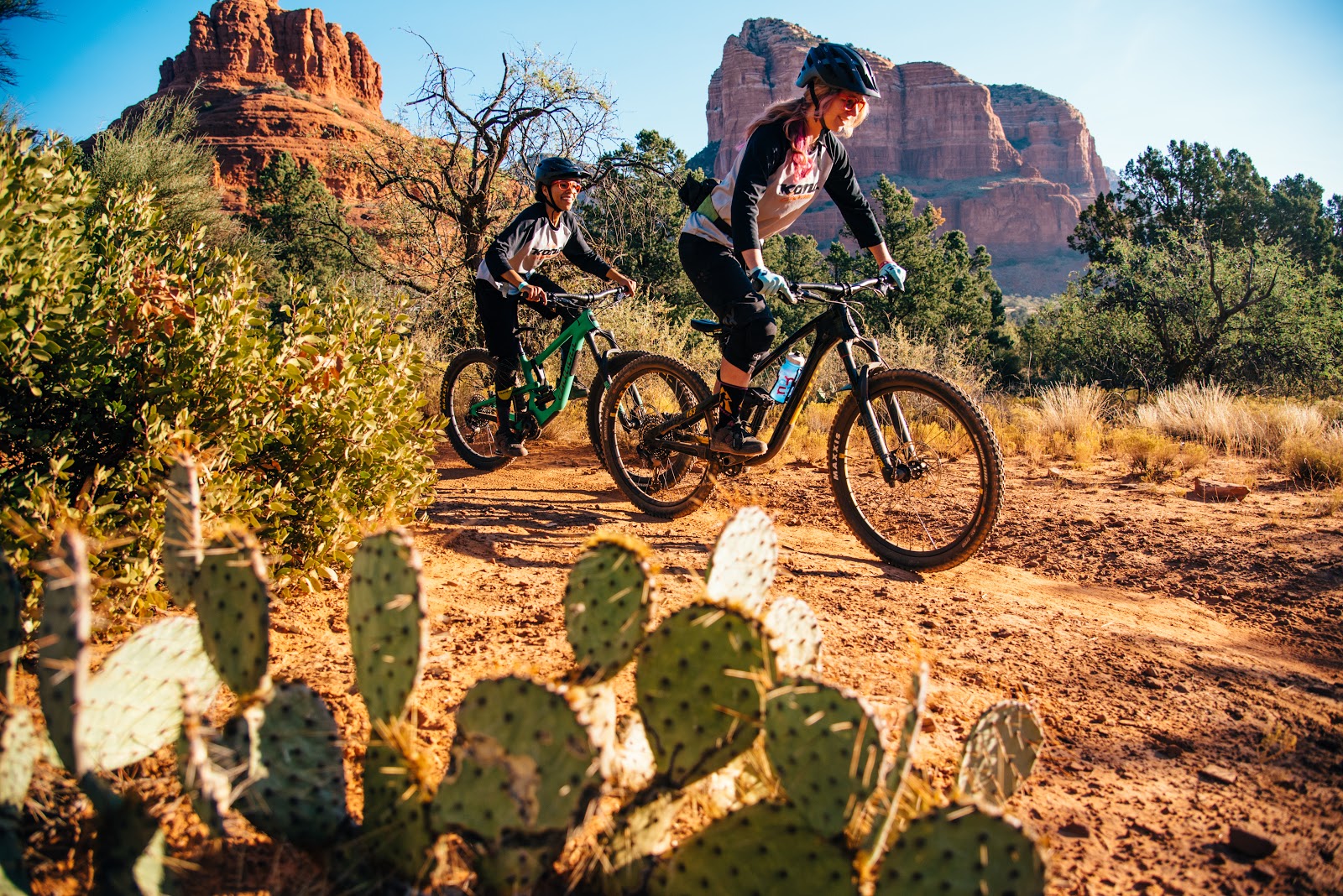 So ladies and gents get outside tomorrow and be sure to share your stories for the trail by using the official #womensmtbday. Katie Lozancich Photo

Any other big goals for the day?

AR: Just to simply be doing something. Sure we don’t have everything a 100 percent dialed but let’s just get the word out. Get people thinking about it and make it very social so it’s visible for more engagement moving forward.

Overall we just want to understand what the face of mountain biking looks like today.