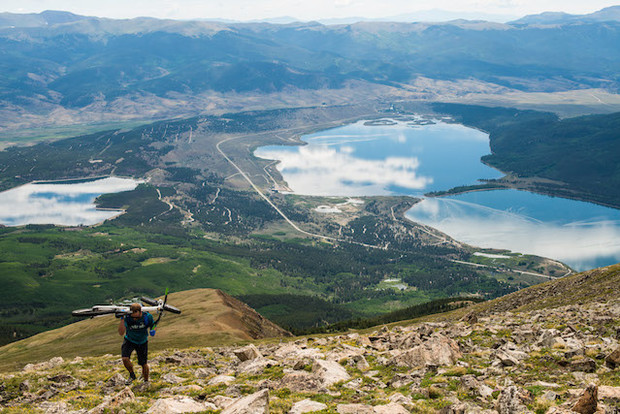 It was after six miles of ruthlessly technical riding in the alpine when Whit Boucher and Ian Fohrman realized they were gassed. The trail–which was open to mountain bikes, but in no way designed for them–was more or less an extended boulder field and, early on in their attempt for the summit of 14,269-foot Mt. Antero, they thought they had plenty of energy to turn around and try and clean the technical lines they couldn’t clear the first time through.

But the effort had taxed them hard, and now, at over 11,000 feet, the summer sun was cutting down through the thin air and beating at their backs as they hiked five miles on a jeep road without a lick of shade anywhere in sight. Their bodies nearly failed as they hoisted their bikes onto their backs and walked, step by step, the final scree-riddled approach to the summit. Finally at the summit, they say with empty heads, slowly drinking water and chewing on energy bars. 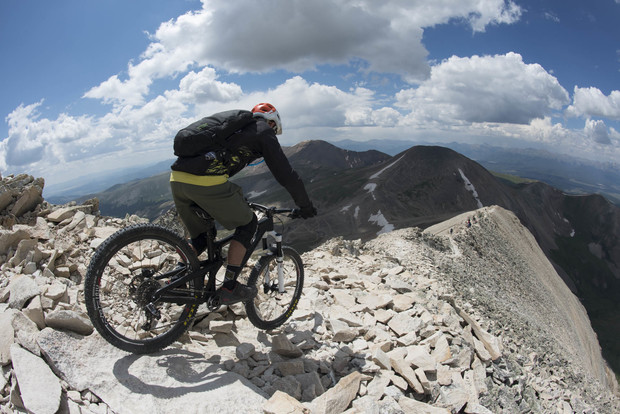 The hike-a-bike behind them, the pair clipped in and starting rolling down from an elevation few bikes in North America had ever reached. Wandering onto a faded game trail, Ian and Whit found their wheels rolling down seven miles of the best gravity-fed riding they’d ever experienced in Colorado. Wide-open sections scooting along the sides of open slopes higher than the top of any ski lift in the state begged for the brakes to be released. Wildly steep and technical sections, which had seen trail maintenance that was catered only towards hikers, dropped vertically down the mountain. 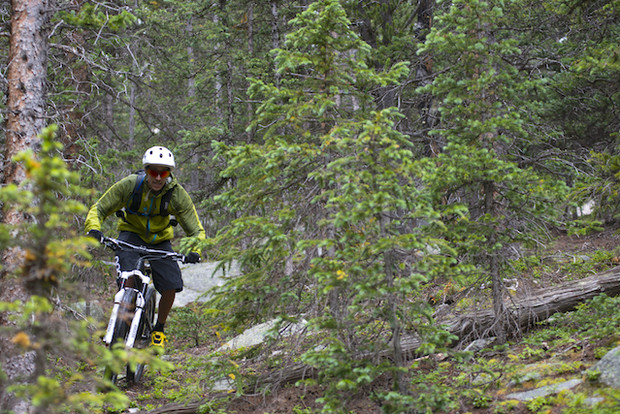 Trees began to climb out of the ground as the elevation dropped, and the pair ripped through miles of sandy conifer forests, trading leads as they darted between the trees all the way to the confluence with the Colorado Trail, which covers 500 miles from Denver to Durango. 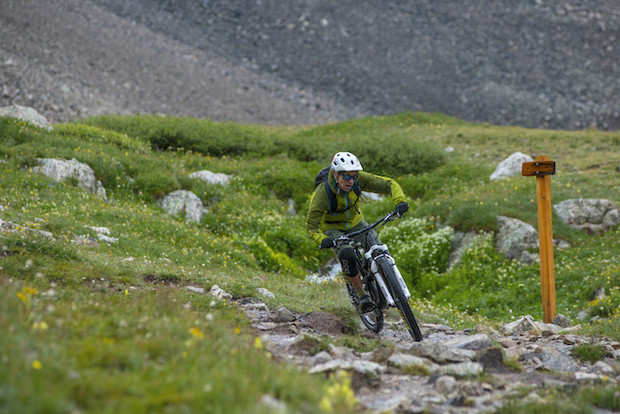 The 25-mile loop had been, in Whit’s own words, “a death march,” but it had very much been in the spirit of their quest to ride all 18 of Colorado’s 53 peaks above 14,000 feet that aren’t off limits to bikes–you don’t know until you go. You don’t know how much of the ascent will be rideable, how much energy you’re going to burn climbing those “rideable” sections, how hard it will be to navigate loose scree fields and steep tracks of boulders with a mountain bike balancing on your back, and, once on top your objective, fully exhausted at over 14,000 feet, what you’ll be able to safely ride on the way back down.

Why Bike The Fourteeners? 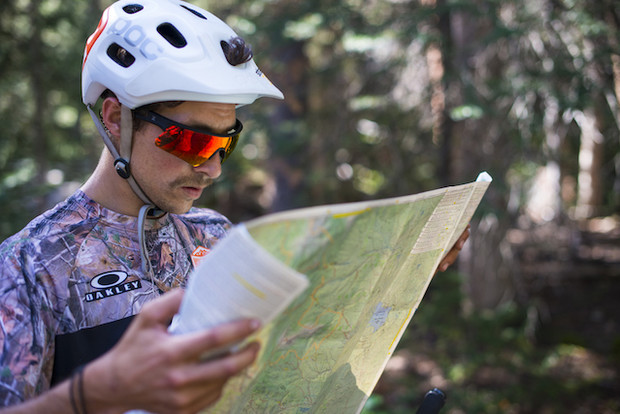 Whit & Ian’s campaign to ride from the summit of all of the state’s fourteeners where bikes are allowed was inspired partly by the prospect of the adventure and fresh trails, and partly by the opportunity to make a statement. The pair started Bike The 14’ers on the 50th anniversary of Lyndon B. Johnson’s Wilderness Act, which now prohibits the use of mountain bikes on 109.5 million acres of public land across all fifty states. Whit’s hometown of Aspen is encircled in wilderness areas–severely restricting two-wheeled, human-powered access there–and he’s not alone in believing that mountain bikers should be allowed on much more of the country’s public lands. Last week’s Congressional action, which kicked mountain bikers out of 275,000 acres of the Boulder-White Clouds Mountains in Idaho following a Wilderness designation by the Senate, is symptomatic of the larger debate about bikes’ places in wild lands. It’s a debate Whit is passionate about in his home state more than ever.

“There’s so much old hiking trail in the mountains in Colorado that no one ever uses,” Whit said in a recent interview. “There’s so many old mining roads up high in Colorado, too, that never gets utilized anymore. If there’s already a hiking trail, a non-motorized bike is not really impacting a trail at all; you’re not ripping up the ground. I like the idea of wilderness, but [the Wilderness designation] kind of sucks.” 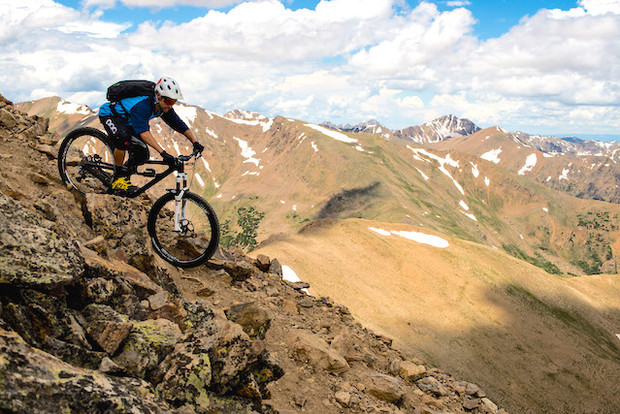 Whit drops in for a perception-bursting descent on Mt. Elbert. Ian Fohrman photo.

The campaign actually began after they’d tackled their first fourteneer–14,433-foot Mt. Elbert. One of the more “popular” ones for mountain biking–by which we mean at least a few prior humans had actually ridden it–Elbert was rippable all the way from the top, and, after confirming for some silver-haired hikers that they did intent did to ride their bikes down this peak, Whit and company got to sample some game-changing trail.

“Passing some hikers, we received some cheers as rounded the corner into the first big pitch,” Whit wrote in his trip report for the mission on Bikethe14ers.com. “The hiking trail we missed on the way up was quite technical, but still rideable. Steep, loose, butt-dragger moves turn after turn–I felt like I was in a video game. With each technical spot I made, it fired me up to keep charging on, leaving the rest of the crew pretty far off the back. But it felt so good to keep linking move after move. Way too good to stop riding.”

RELATED: Mountains of Hell is not your average enduro race

After poring over maps, the crew found another 17 peaks eligible for mountain bikes, and began searching through the archives of 14ers.com, an excellent resource for hikers campaigning to hit all 54 and which gave them some rudimentary beta to base their assumptions for rideability off of. At minimum, a Class 1 hike meant that it could be ridden on a bike from top to bottom, no problem. 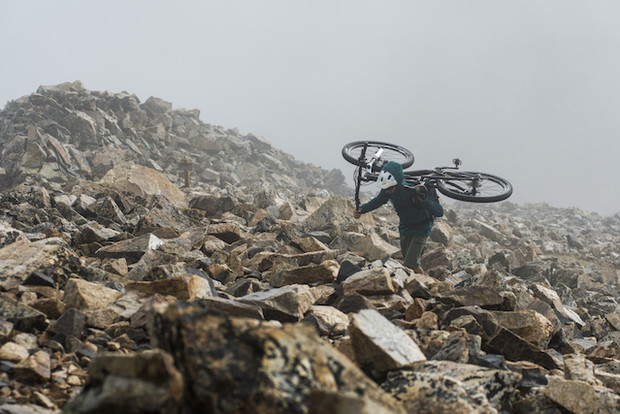 Class 2? A toss up, but you’re probably going to need a few Danny MacAskill trials moves up your sleeve to negotiate the most technical sections of rock. And going up? “We’re doing a lot of hike-a-biking,” Whit said. “And I would pay money to see someone pedal up some of the shit on these Class 2 peaks.” Luckily, one of the eighteen–14,110-foot Pikes Peak–has a paved road all the way to the top, and purpose-built freeride trails on the way back down. It’ll stand out as the most bike-friendly mission among a slew of objectives that cater to bikes only by being legally open to them. 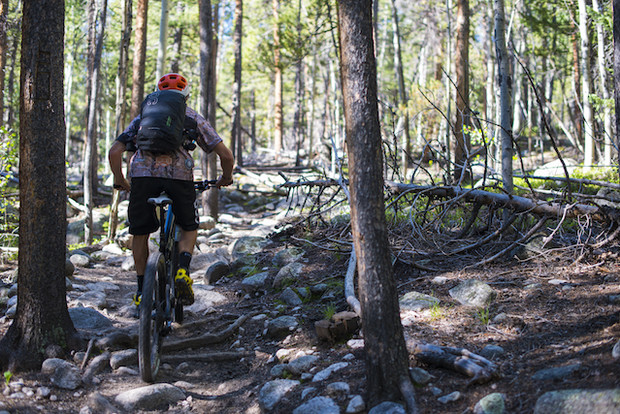 Whit getting some rare pedal climbing in up Mt. Antero. Ian Fohrman photo.

Of course, with that kind of mission, the whole approach is different. Carrying a bike, sometimes for up to two and a half hours, is the norm, which means keeping your kit light is essential. Whit and Ian will usually make an approach with just their bike pack, some food, a rain shell, knee pads, and plenty of water. A pack appropriate for the mission–one where your top tube can rest on top of it while you hold onto the end of your handlebar with one hand and your seat with the other–is not in making bike companies’ repertoire, so some trial and error was necessary to provide a proper mount. 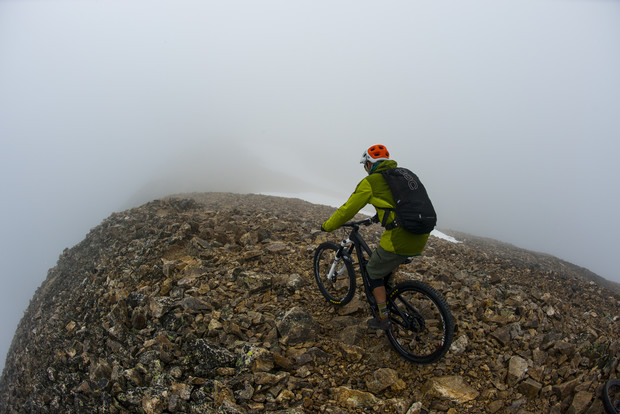 Ian rallies into the fog off the summit of Mt. Democrat. Ian Fohrman photo.

Carbon enduro bikes–Whit rides a Santa Cruz Nomad, Ian a Yeti–are the best tool for the job, with a mix of light weight for pedaling (or more often, carrying) the bike to the top and burl for handling the descent on the way down. But the flip side is the complete agony any bike owner could appreciate feeling at the sight of their precious carbon wünderbike tumbling down a scree field after a bail, or even having their downtube get pinged by rock after rock on an alpine descent. 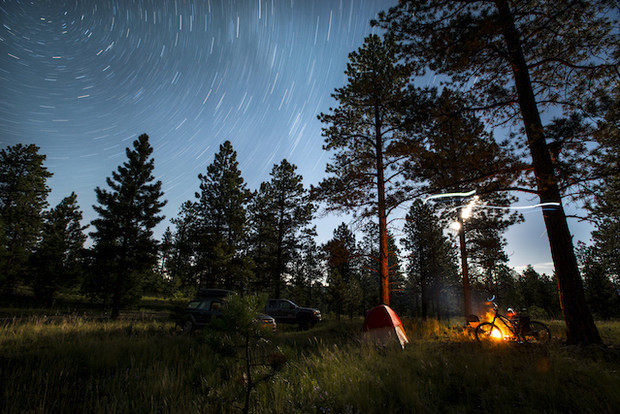 Camping before the assault on Mt. Antero. Ian Fohrman photo.

While the pair are still early in their overall objective, with four of eighteen possible peaks in the bag, they hope their bikethe14ers.com and the coverage they get of their hike-a-bike efforts doesn’t sell their impeccable radness, but rather lets riders who’d otherwise be plucking around in the valleys know that amazing trails await up high in Colorado. And that the hikers won’t kill their buzz. “We’ve run into hikers every time we’ve gone, and not a single person has given us shit, they’ve all been hyped on it and thinking it’s really cool. We really appreciate it.”