Wednesday on Instagram, Australian surfing legend Mick Fanning confirmed a rumor that's been circulating for some time in the surfing world: He will be retiring from the World Surf League's Championship Tour this year.

In a lengthy Instagram post, the man known as "White Lightning" announced that he would be calling it quits from professional surfing at the upcoming CT stop at Bells Beach in Australia, which is set to take place between March 28 and April 8.

"I’ve decided the Rip Curl Pro Bells Beach will be my last event as a full-time competitor on the World Surf League Championship Tour," Fanning captioned the above Instagram post. "The tour has given me so much but I need a fresh challenge. I still love the game but can’t find the motivation and dedication required to compete for World Titles anymore."

"I will be competing at the opening event at home on the Gold Coast and then wrapping things up at the Rip Curl Pro," Fanning continued in the post. "Bells Beach is where my Championship Tour career really kicked off, I’ve always loved the place and it seems a fitting stop to finish things up. It’s gonna be a big fun party and you’re all invited to come. Hope I see you there."

The 36-year-old Fanning will be remembered for being one of the fiercest competitors in surfing's history–his three world titles tie him with the departed Andy Irons for the third most all time–and for being one of the fastest surfers to ever live. But, for terms of sheer emotional weight, nothing may compare to Fanning's 2015 season.

Chasing his fourth world title, Fanning famously came face-to-face with a great white during the finals of the J-Bay Open in South Africa. Then, with the world title on the line at the last tour stop that season–the Billabong Pipe Masters in Hawaii–Fanning learned of the tragic passing of his brother Peter just minutes before he was set to hit the water on finals day. It was the second brother he had lost unexpectedly to tragedy, having previously lost his brother Sean to a car accident in 1998. Round 4 of that contest, where Fanning bested Kelly Slater and John John Florence, can still send shivers up the spine of a surf fan.

Ultimately, Fanning lost out on the world title that season to Brazilian Adriano de Souza when he failed to advance beyond the semifinals of the contest, but the aforementioned heat produced one of the most iconic images in the history of competitive surfing.

Taken by Fanning's close friend, photographer Corey Wilson, the shot shows Fanning glancing to the sky after making an impossibly deep barrel at Pipe, arms raised up as if to thank his departed brother for the wave. 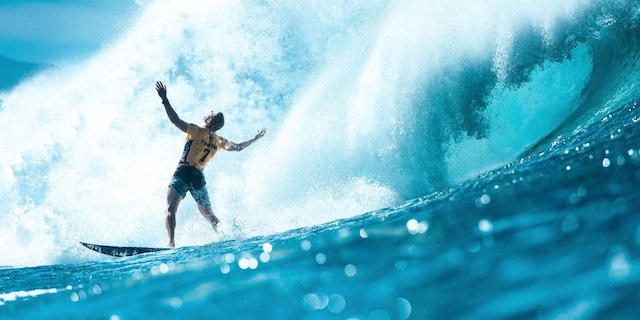 The beautiful image of Fanning coming out of the tube in round 4 of the 2015 Pipe Masters will live forever. Corey Wilson/Red Bull Content Pool photo.

After 17 years, 22 CT wins and three world titles, Fanning has more than earned the right to retire on his own terms. Good on you, Mick.