Most Important Event In Ski History: The Pain McShlonkey Classic 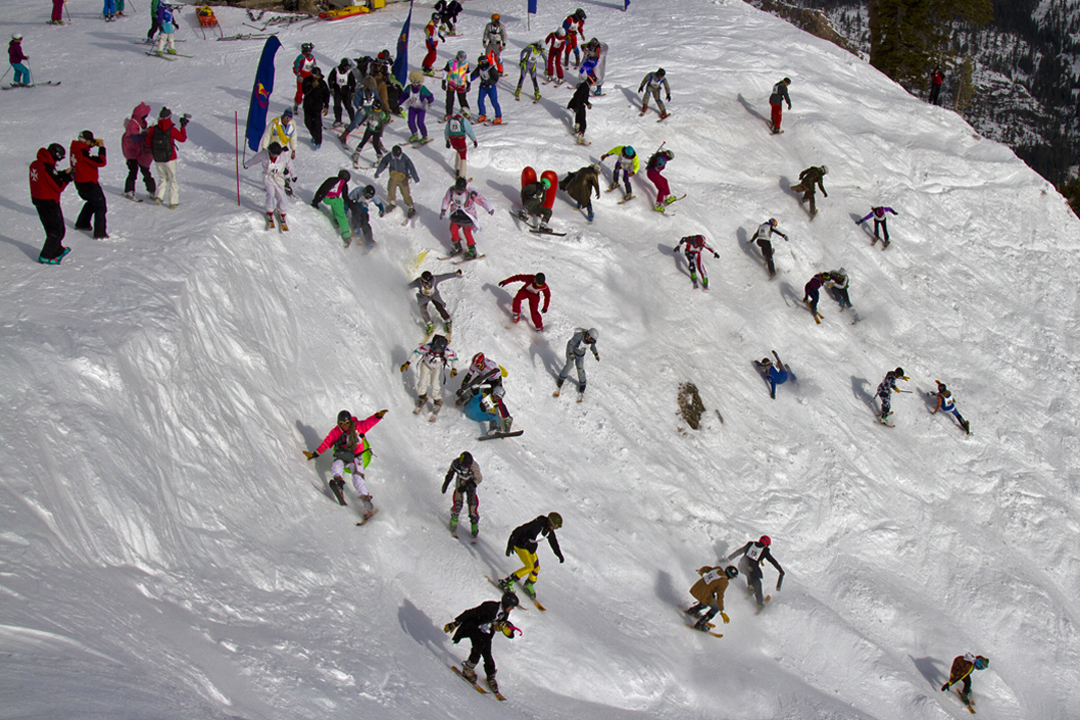 A chiseled collection of some of the world’s top skiers descended on Squaw Valley for the 2nd Annual Pain McShlonkey Classic last weekend. The off-the-wall event, billed as “the greatest event in ski history,” was a celebration of the legendary antics of the late Shane McConkey, the pioneering freeskier who passed away three years ago in a ski-BASE accident in Italy. PMS participants and party people reveled in Shane’s legacy for a binge weekend featuring a snowlerblade Chinese downhill, a snowlerblade extreme comp and a pair of all-time parties.

The event kicked off with a benefit bash on Friday night at which dozens of Shane’s close friends and supporters showed their love for his legacy at a silent auction. The auction raised $30,000 for the Shane McConkey Foundation, which will in turn donate the money to the Make-A-Wish foundation and the Truckee Tahoe Unified School District for the purpose of putting TTUSD schools on a path toward sustainability and environmental responsibility.

There was no rest for the wicked Saturday morning, however. The action cranked to 11 bright and early with the KT-22 Chinese Downhill. Forty racers donned short-skis and McConkey inspired costumes for a high-speed tumble down the face of KT-22 in a race to claim the Golden Saucer trophy. Sketchy snow conditions from start to finish made for a true battle royale as competitors flailed their way around every gate, often taking each other out in the process.

The hilarious affair continued with the Extreme Small Mountain competition, which pitted man and woman against the mountain for one epic run on short-skis. Competitors went above and beyond in an effort to impress the judges with their creative radness. Some opted to huck cliffs into snow conditions they wouldn’t have considered on regular length skis, while others mixed in improbable technical maneuvers. No doubt the show of short-ski skill cemented the billing of “greatest ski comp ever.” The “Saucer Boy” would have been highly impressed.

“The PMS epitomizes what Shane was all about,” said Men’s Chinese Downhill winner Daron Rahlves. ”It’s a lot of fun for us to come out and live with the same spirit Shane did, get goofy and throw down with buddies for pride that’s on the line. Everybody is having fun for the love of the sport of skiing and not taking it too seriously. Shane instilled that in all of us.”

Rahlves summed up the vibe right, but he was a bit off the mark as far as not taking the PMS seriously. There were dead serious Squaw Valley shenanigans on display all weekend. Check out these pics and decide for yourself.

- Words and Photos by Seth Lightcap 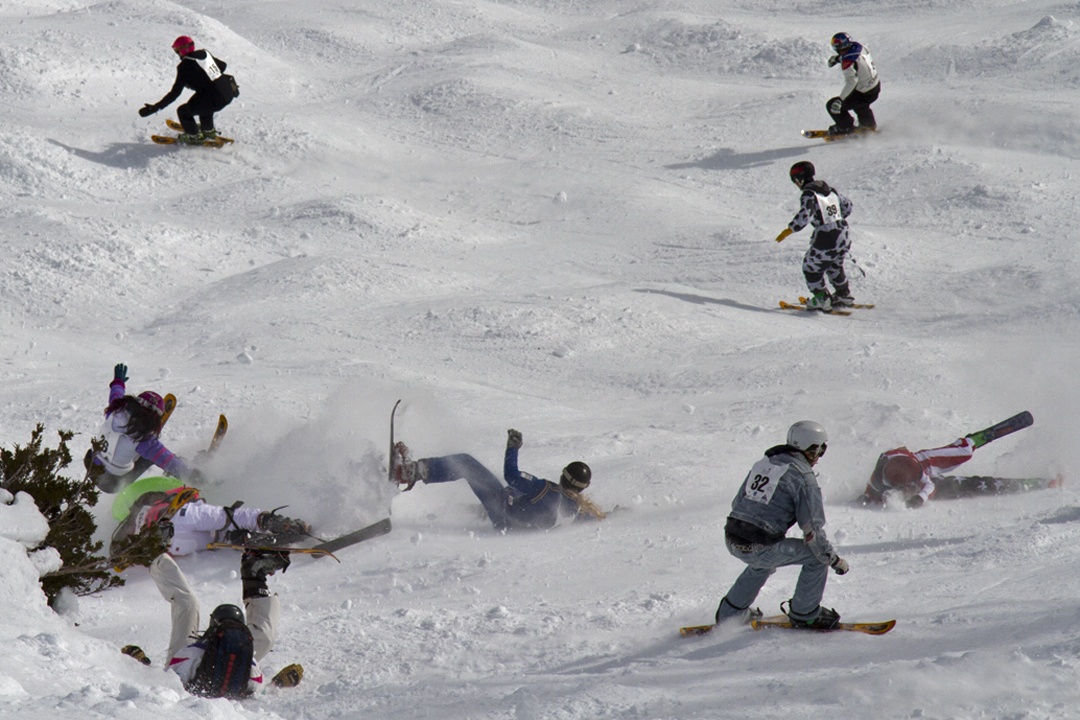 The crunchy bumps of the Chinese downhill course took no prisoners. If you didn’t keep your edge game tight you were on your ass in an instant. Note the guy in the top right corner of the image with World Cup worthy form — perfectly balanced on one ski. That’s local sandbagger Rahlves, of course. Surprise, surprise, Rahlves came from behind to win the race and take home the coveted Golden Saucer trophy. “This is my new claim to fame,” exclaimed Rahlves after the race. “The saucer is gonna hang on my mantle next to all the Kitzbuhel trophies.” U.S. Olympic mogul star Shelly Robertson took the Chinese downhill title for the women. 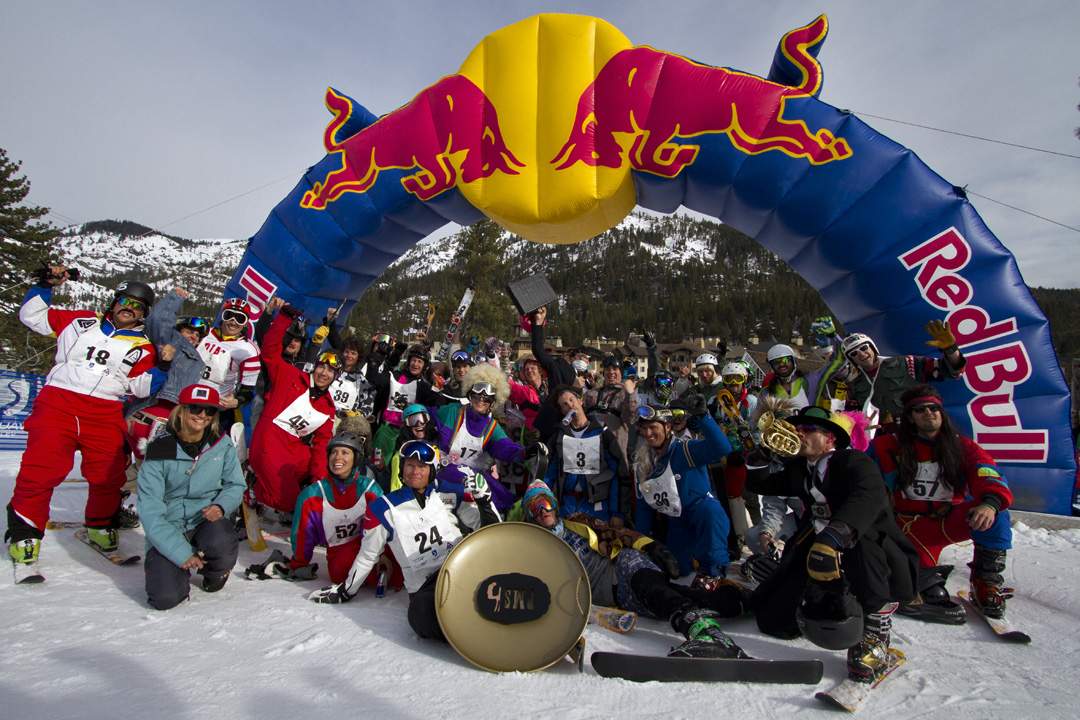 Dozens of radical skiers came out to battle for bragging rights, laugh about Shane’s legacy and show their support for the work of Shane’s wife Sherry (bottom row, far left) and the Shane McConkey Foundation. 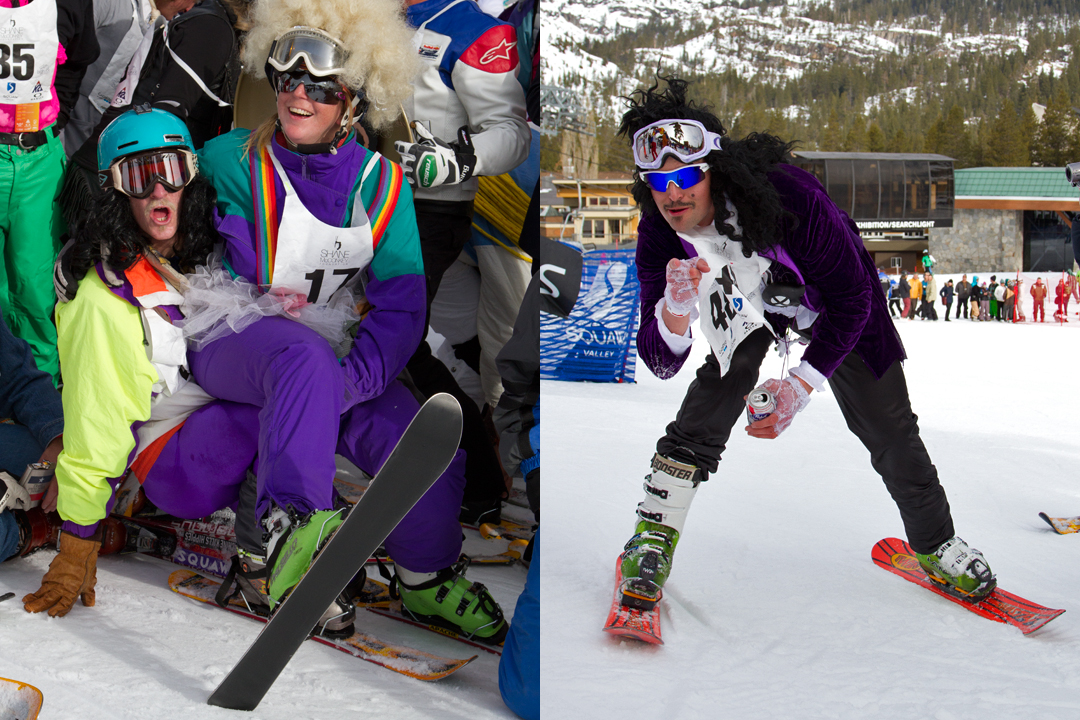 Channeling the spirit of Saucer Boy meant everyday ski attire was out of the question. Pain McShlonkey competitors came dressed to impress. 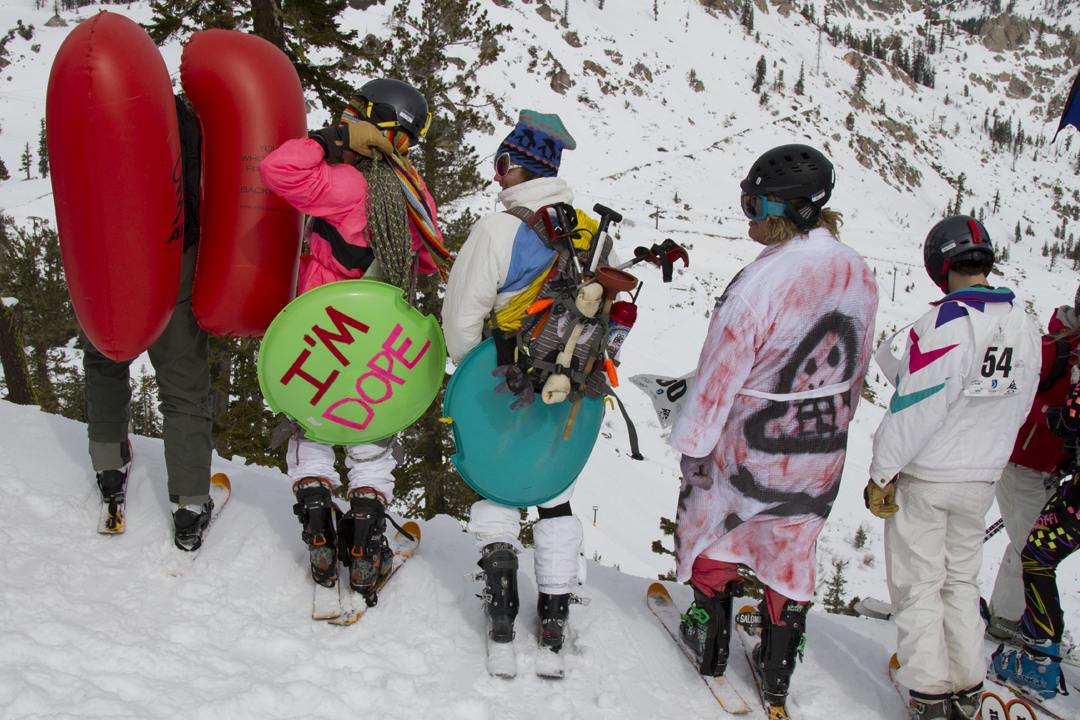 After a bit of marinating post-Chinese downhill, the Extreme Small Mountain Competition got underway in the Enchanted Forest off KT-22. Each contestant got one run down the steep and rocky bowl to impress the esteemed panel of judges, including Sherry McConkey. You can’t even imagine the competitive intensity swirling in the heads of these athletes as they waited for their turn to drop. 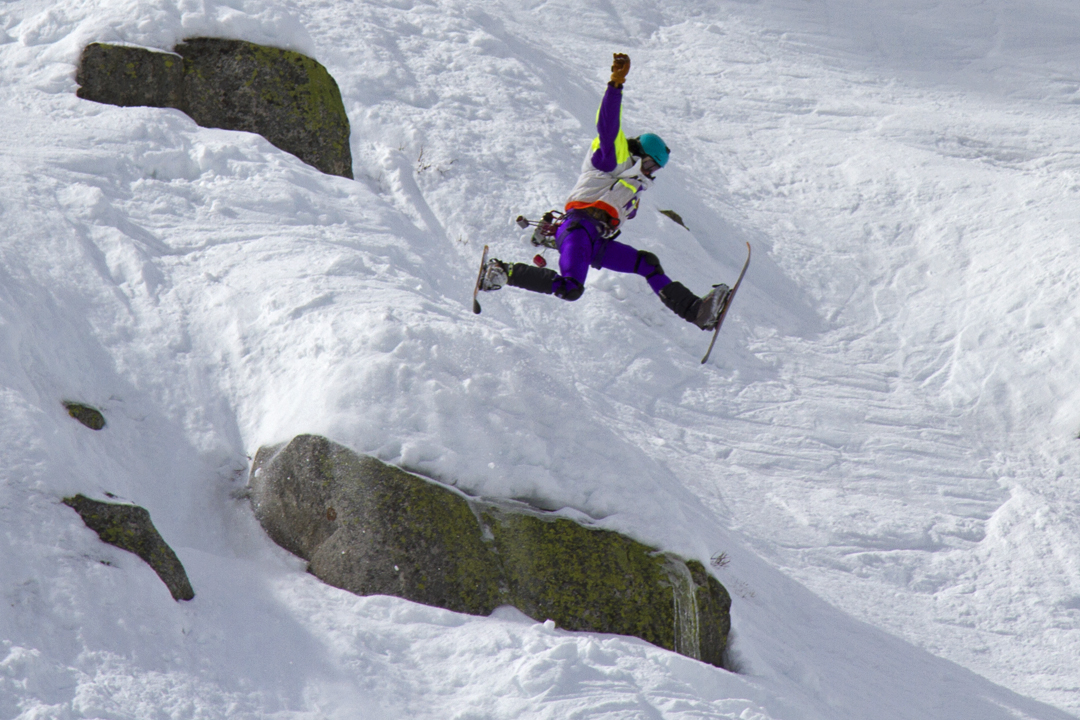 And this is what the Extreme Small Mountain comp was all about...getting rad on short skis! Bad-ass snowlerbladers dropped into the cliff bands of the Enchanted Forest and laid down lines they thought Shane would of done. 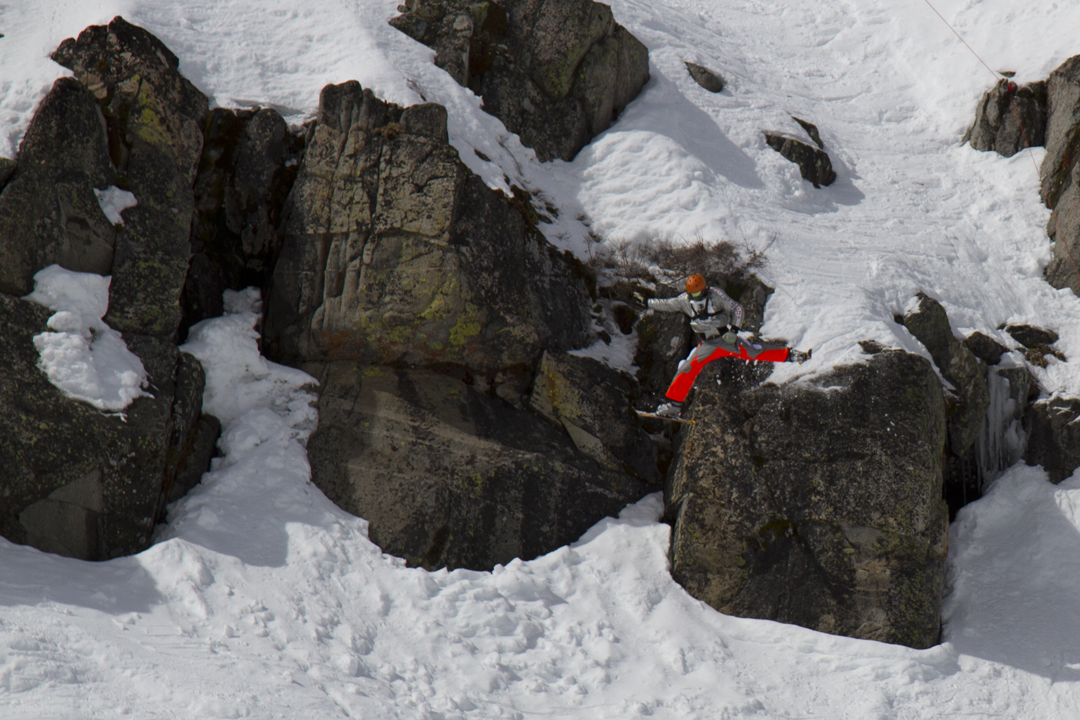 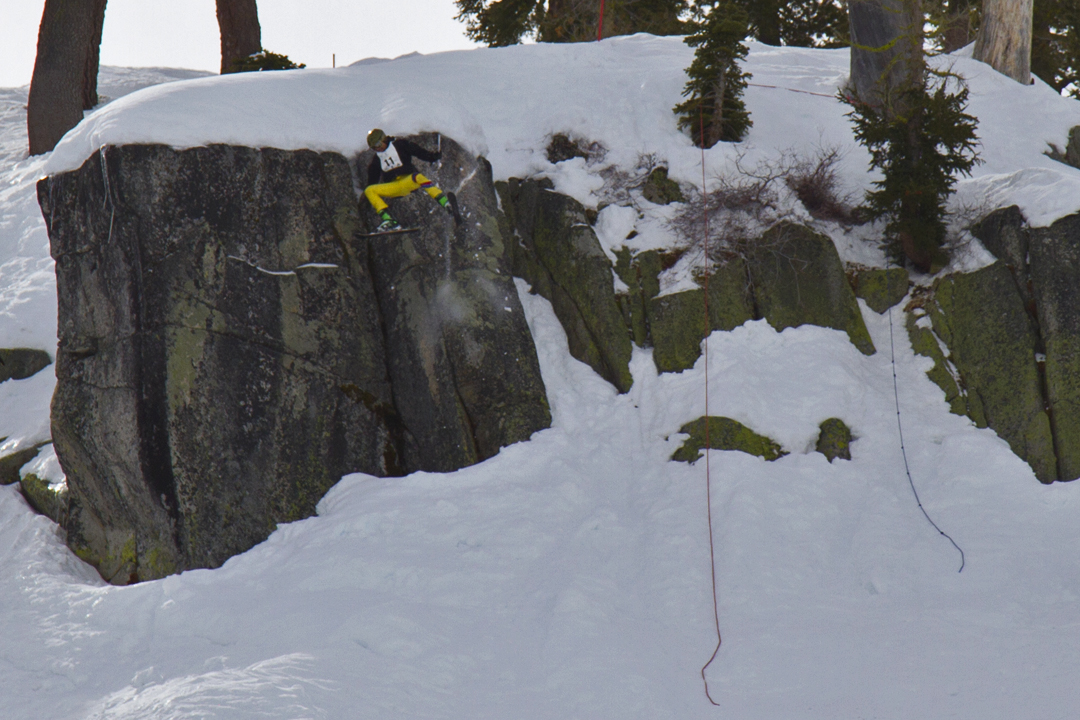 Some serious losers needed ropes to scale down the Tombstone cliff, but not second loser Kristian Geissler. Geissler hucked it and grabbed third place for the feat. 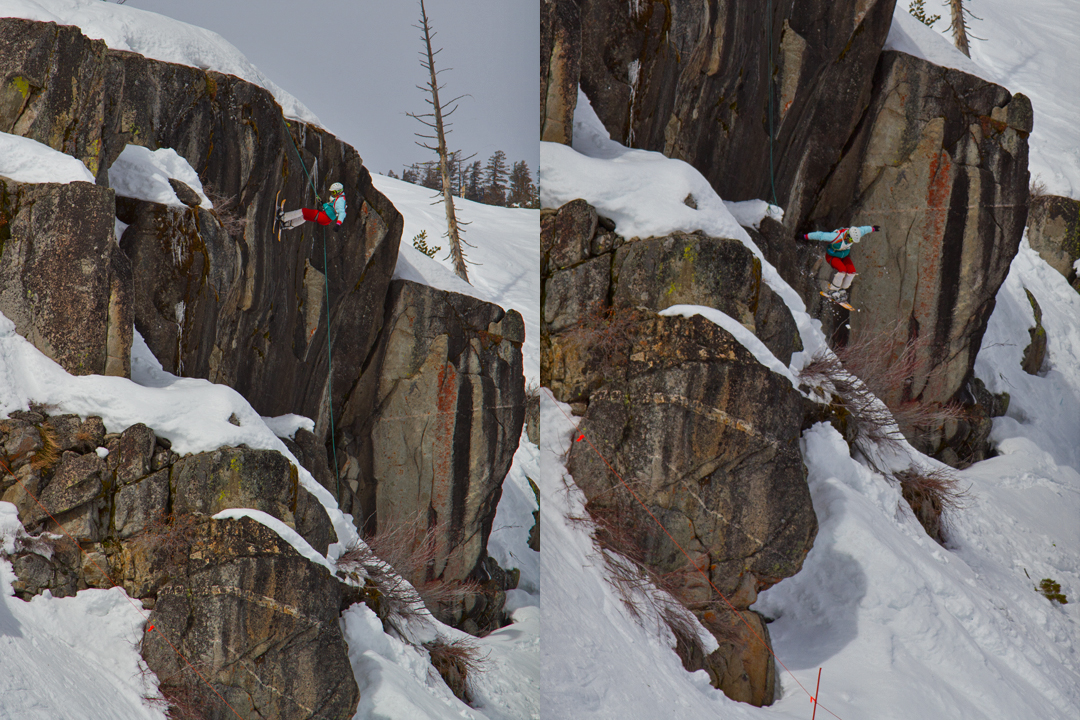 Big airs wooed the judges but there was no denying who set the high mark for micro-mountain technical radness. Kyle O’Neal casually fruitbooted over to an anchor he had stashed above the infamous ‘Ice Goddess’ cliff and proceeded to rappel down the 30 foot face to a low ledge. O’Neal then leapt from the ledge in perfect speedflying form, bounced off the landing and brought around two tucked somersaults before popping back up on his feet. 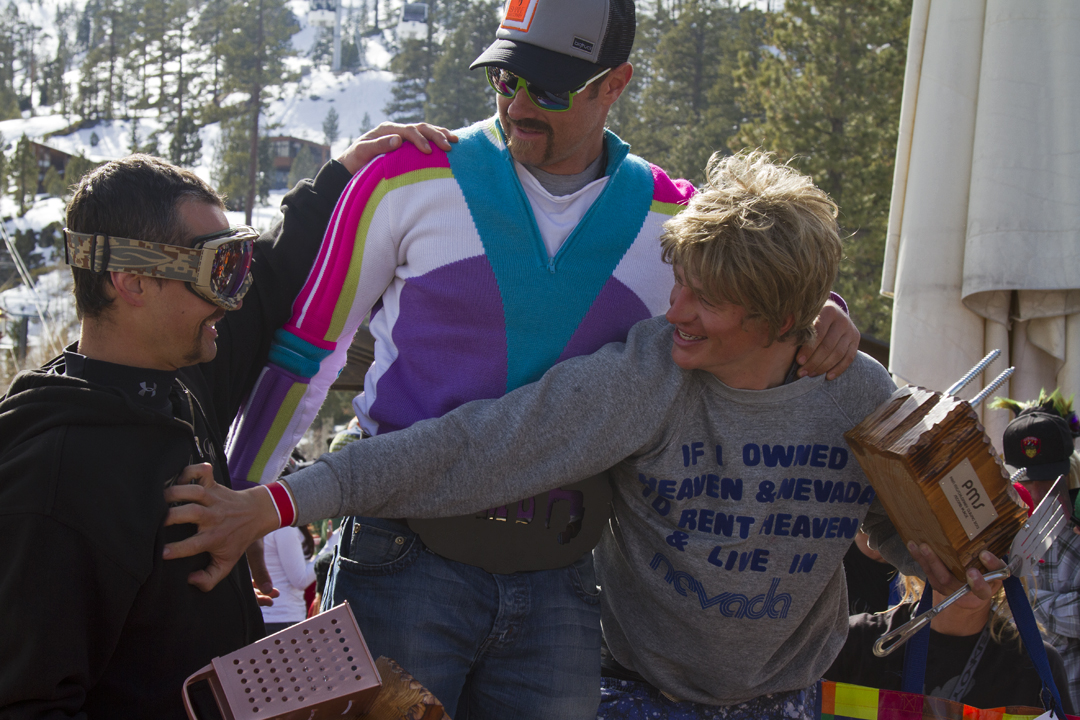 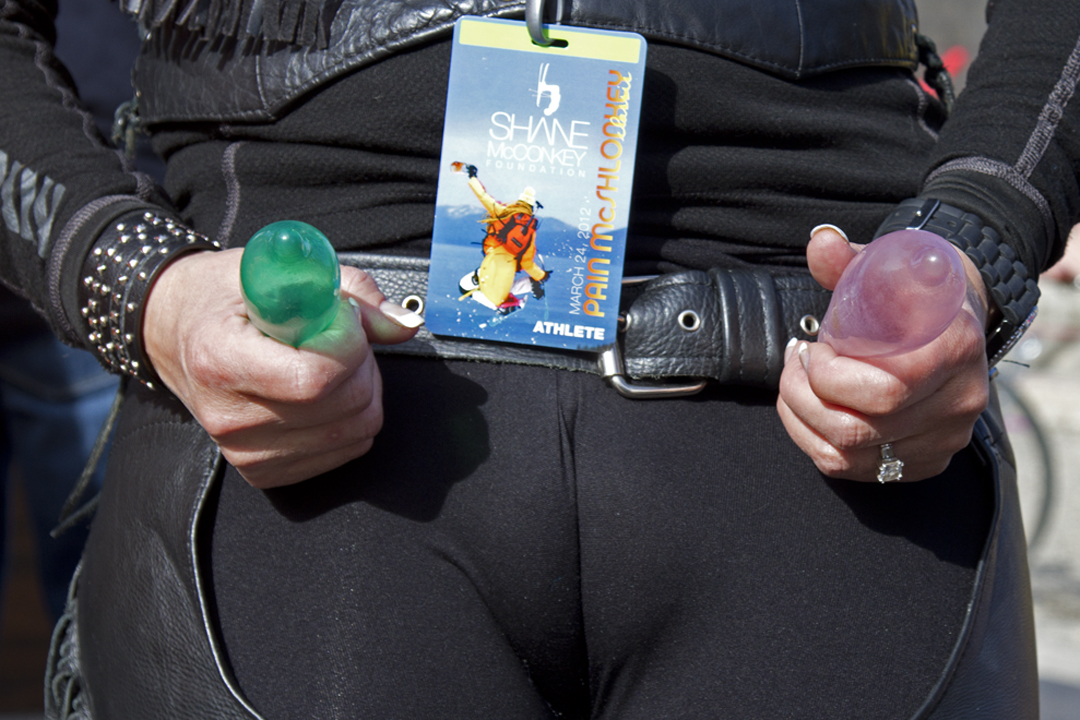 You’re damn right there were man-eating former and current women’s extreme champs battling for Pain McShlonkey glory! Remember, this was one of the greatest ski contests ever known to man or womankind. If you think your pants are holding what it takes to win the Golden Saucer next year, don’t miss the PMS!