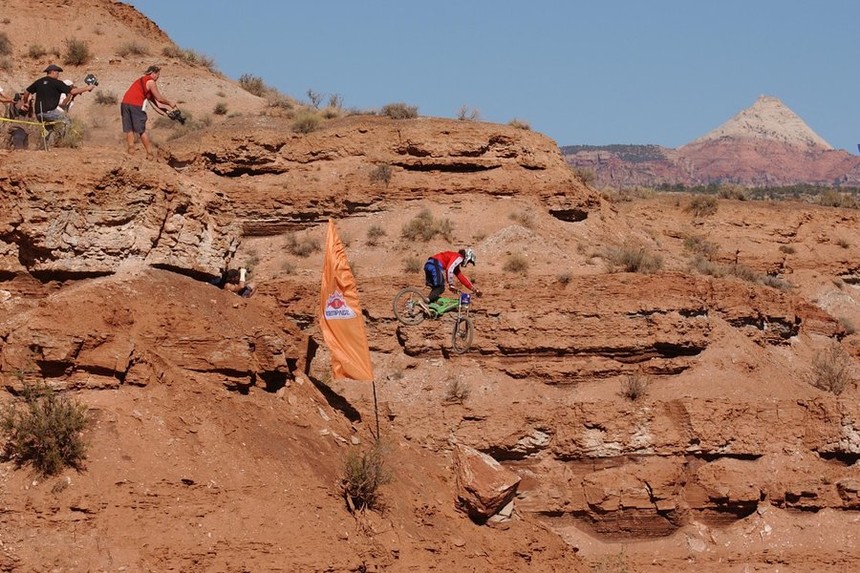 Submitting thousands of comments to the Bureau of Land Management convinced them to hold back land in southern Utah -- which hosted the first three editions of the Red Bull Rampage contest -- from oil & gas drilling. Randy Spangler sends a drop at the first Rampage in 2001. Christian Pondella/Red Bull photo.

Hello internet outdoor sports enthusiasts! It is I, Ryan Dunfee. Maybe you remember, maybe you don’t, but I used to have my name at the top of many items of clickbait, along with the occasional gear review, mocking commentary, or other items for eyeball consumption that were little more than several dozen adverbs about the outdoors linked together incoherently in paragraph form. I miss you all!

Anyways, last summer, I left my prestigious nest here at TGR to pursue another calling of mine that had begged my attention ever since I began enjoying the bounty of this great planet on skis, bikes, and surfboards – environmental activism. The Sierra Club, whose history predates even our National Park Service, was convinced over the course of several Google Hangout interviews into bringing me aboard, and since then I’ve been acting as the Community Manager for our activist version of clickbait, AddUp.org, where we work to use some of the same skills I picked up at TGR – namely, how to get folks like you off of Facebook onto a website and clicking around a few times – to overwhelm public officials and company executives with public input, whether it’s in defense national monuments (stand with Bears Ears!) or clean energy.

Without tempting this conversation to derail into a stagnant cesspool of vitriolic political Facebook comments (don’t be tempted!), I’ll say only that our environment is having a tough go of it under the current administration. Despite what the majority of Americans may want as far as environmental protections or international climate work, the Trump administration, amidst all its various policies and initiatives, has pulled few punches when it comes to scrapping protections for our climate and public lands.

If you’ve been watching the news this week, you’ve probably seen Secretary Zinke recommend dramatically scaling back the size of Bears Ears National Monument. It’s not a surprise, and if Trump acts on the recommendation, he’ll face the same legal backlash he was hit with over his travel ban (Congress alone has the authority to downsize existing monuments. But it’s still sad.

But I came here to waste your time not to mourn, but to offer hope. For one thing, clean energy is kicking more ass than Steph Curry these days, and creating backers for cool toys like wind energy in deep red places like Kansas and Texas. And, if you’re a mountain biker, you’ll be excited to find out that the BLM, following submission of over 50,000 comments by the Sierra Club and work by dozens of other organizations and locals in southern Utah, has decided they won’t sell off three parcels of public lands just miles from the doorstep of Zion National Park, some of which contained the original Red Bull Rampage venue – which you can bring your downhill bike to and ride for free any day of the week, if you have the balls to – along with the badass Flying Monkey downhill trail.

This was land proposed by oil & gas developers as places they might be able to dig up, flatten out, and suck some fossil fuels out of, but which was instead preserved in large part due to people who love to mountain bike advocating for the land’s value to create incredible experiences and memories. It’s how this process, with concerned citizens petitioning their government to act in their interests, is supposed to work. And this time, it did, and now you’ll still be able to journey down to southern Utah, full face helmet and kneepads in hand, and ride historic, gnarly downhill trails without an oil derrick in sight.

Whatever you do, if you're outside and having fun, the environment that supports that is ready to be helped by your experience. Ryan Dunfee/TGR photo.

What I hope to share with all of you reading this is that you – the person who skis, bikes, climbs, paddles, hikes, surfs, parkours –are one of the best advocates for our environment there could ever be. You understand its value. You know what it gives. It’s not some abstract thing apart on the other side of the highway – it’s where you venture weekly if not daily, where you experience and share some of your best memories, and watch your friends, partners, and kids grow. You take a part of it with you wherever you go, because that experience has become so ingrained into who you are as a person. If you have enough interest in the outdoors to click onto this website, you’re already an environmentalist. And our environment, our lands, and our climate need you more than ever, whether that’s by taking action on one of our online campaigns or by finding an opportunity where you can volunteer. They need cool people like you!