In an incredibly competitive men's ski competition, Amacker, of Le Valais, Switzerland, was the last rider down and chose an original line in the riders left hand side of the face. The 23-year-old then quickly put on a demonstration of world-class freeriding. Always in complete contro,l his jumps were longer and cleaner than his rivals and deservedly took away the main prize. A clearly very happy Amacker said: "I had a great day. The snow was good, I took a lot of air on my jumps and landed all three really cleanly."

Sam Smoothy, of New Zealand, continued his outstanding early season form with second place. Sam dropped in very aggressively, powered over two cliffs and blistered his way to the finish. Making it a great day for Switzerland, Samuel Anthamatten took third place. Samuel's technical ability is clear for all to see but he's also been working on some tricks during the off-season. Samuel first brought the hammer down on a massive cliff in the super steep and technical central part of the face then rounded off his run with a brilliant back flip. Samuel who has had an off-color first part of the season said: "I'm really satisfied with my run. I wanted to do more jumps, but overall it went well and I'm very happy with my landing off the back-flip."

In the men's snowboard, Ralph Backstrom just gets better and better. Taking a line on the extreme riders right, Backstrom patiently worked the upper face as he transitioned into his first drop of the day which he executed with a silky smoothness. He then glided his way across the face to a steep and rocky section where he dropped no less than three cliffs in quick succession. Backstrom has that something that only the very best athletes have — he makes it look easy.

Backstrom said: "I'm very happy, the conditions were great for high-speed airs. I rode my preferred line, I stayed fast and fluid."

In second place was the 27-year-old Austrian Max Zipser who chose the most popular line of the day on the right hand side. Max quite simply got the job done; clean, fast, fluid and controlled. A beaming Max said: "What a great day with great snow. I hit my line exactly as I wanted, took some nice jumps. I really felt in control and comfortable up there." Rounding off the podium was Douds Charlet from France who continued his early season run of podium finishes.

Courmayeur-Mont-Blanc has been an amazing host to the Swatch Freeride World Tour but the show must go on. Next stop: Røldal in Norway (February 25-March 2) for the fourth event of the 2012 season. 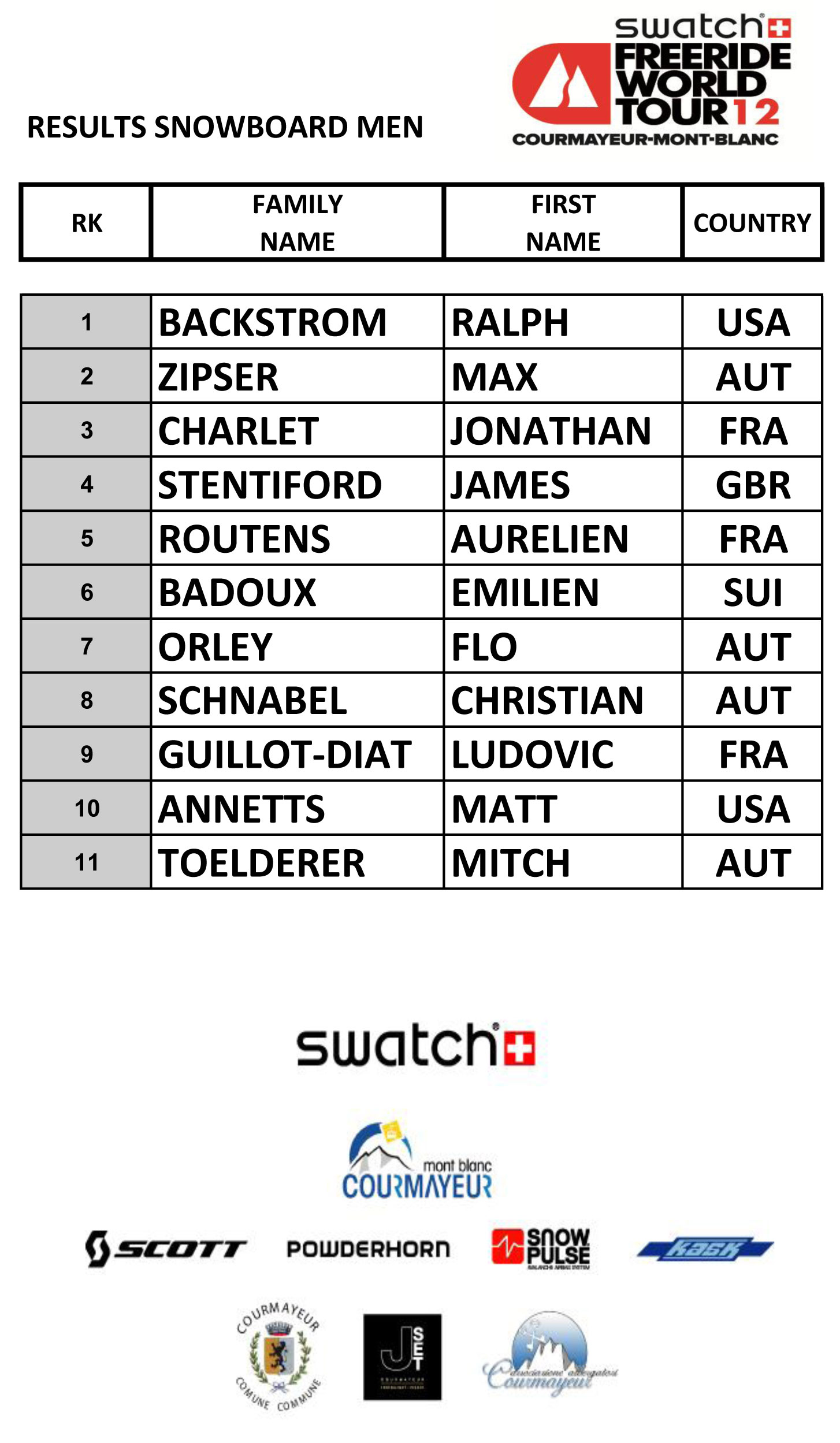