When Marker debuted the Duke binding in the fall of 2007, the whole landscape of backcountry skiing products changed. Before, an enormous chasm existed between resort-oriented alpine setups and light, but seemingly flimsy backcountry setups. Skinny skis, soft boots and minimalistic bindings discouraged some skiers from using the old backcounty equipment to access untracked gnar beyond the ropes.

At the same time, the touring bindings that were compatible with alpine boots weren’t rigid and were mostly adopted by older backcountry skiers. But when Marker launched the Duke — a big, burly 16-DIN binding — the company finally gave hardcore freeriders a ready excuse to enter the touring market. This created a stepping-stone in product development that would let its ships sail unchallenged in the sidecountry market all the way to the present day.

While many Duke owners admit to spending the majority of their time with the heel piece locked down, the binding has given thousands of skiers their first taste of ski touring, helping fuel the boom in the backcountry ski market we are witnessing today. 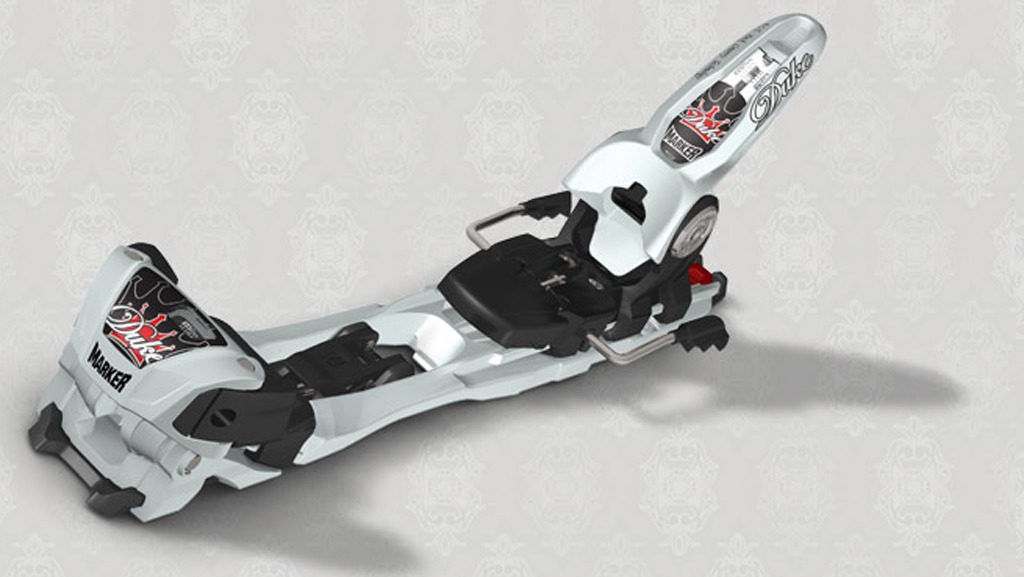 Although still in drydock and with another year before leaving port for shops around the Northern Hemisphere, recent debut of its new sidecountry binding, the identical, dually-branded Salomon Gaurdian 16 and Atomic Tracker 16, is the first major challenge to Marker’s hold on the sidecountry market.

Preliminary models weigh about the same as the Duke, but the Salomon/Atomic binding has a few noteworthy design differences.

Most significant is a lower stack height; Duke users have been known to complain about the separation between the boot sole and the topsheet, which they say changes the dynamics of how their ski reacts. To this extent, the Guardian and Tracker’s 7-millimeter lower stack height should give skiers a feel that is closer to their regular downhill bindings.

Also significant is the wider width and the change in the heel release mechanism, which can be both locked down and released with your ski pole, without taking the binding off. While many Duke users (myself included) don’t mind taking the binding off at the top of a skin, Salomon’s Mike Douglas outlined a few of this feature’s practical applications.

“There were times when I had to cross a frozen lake at the bottom of a run. I’d just click into walk mode to make it easier, without putting on skins,” Douglas said. “On a touring trip in Norway, we ended up skinning up through a dense forest. Sometimes we had to side step through sections. It was so good to be able to just click in, step up, then go back into hiking mode without taking anything off.”

Not to say that they didn’t take a few leads from Marker, as Douglas says the stubby toe-piece and forward pivot were the best option for simplicity, durability and to get the full range of motion on the climb.

Douglas is pretty straightforward about what sparked the idea for the new binding.

“I think the team started working on it the day Marker announced the Duke,” Douglas said. “Marker did a great job at getting the Duke out early. We wanted to make sure that whatever Salomon came up with, it would raise the standard in this type of technology.”

When AMER brought Salomon and Atomic together a few years back, they in turn created the AMER Binding Development Center, based out of Salomon’s European headquarters in Annecy, France, where much of the research and development of the new binding took place alongside three seasons of testing from Salomon’s team.

Now going into the fourth winter of testing, Salomon has made a commitment to getting this product right, likely keeping in mind the hangover of legal issues and hurt brand perception that shadowed Salomon after an early model of their Quest touring boot failed, causing serious injury to a skier that had message boards up in arms.

“That incident has definitely slowed down the pace of the rollout on this binding,” Douglas said. “We put it through additional test rounds in both the field and the lab. … We pushed it hard in every way possible and it performed incredibly well. Obviously, given the importance of a binding, we want to take a bit of extra time to make sure everything is as good as it can possibly be.”

Salomon/Atomic’s anticipated offering is currently the only challenger to the Marker lineup on the horizon outside of the MFD All-Time system, as many North American freeriders have dismissed Fritschis and Naxos as too feeble.

However, Marker may have unintentionally created more competition for itself in other ways. Now that so many more people have entered the touring market and spent a few seasons on Dukes, Barons and Tours, they are looking at Dynafit users with increasing envy and less skepticism than in years past.

Dynafit has expanded its freeride offerings with beefier bindings that feature wider footprints and brakes. The company has also added stiffer touring boots like the Titan Ultalight, a Powder Week favorite, to compete with the host of boot companies like Black Diamond, Tecnica, and Scarpa that offer AT boots tailored to more aggressive skiers.

Skiershop.com’s Erme Catino sees this development having its own force, noting that adding a maniac straightliner like Eric Hjorleifson to the Dynafit team has validated the durability of those bindings, and after much debate within the shop, her thinks more and more people will opt directly for the lighter AT setup.

While a year still remains before the Salomon Guardian 16/Atomic Tracker 16 reaches the market, this shot across Marker’s bow, four years in the making, is sure to be the first of a slowly building salvo of binding offerings that will offer the consumer every imaginable setup to get up and down the hill in the same run.

While Marker had no comment to provide for this article, there is sure to be a lot of talk of what they may plan to do to shore up their line in face of this new competition.