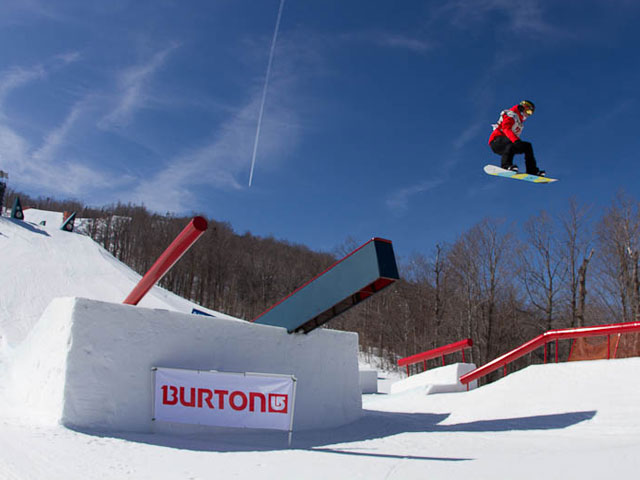 Vail, Colorado – The Burton U.S. Open Snowboarding Championships, at home in Vermont for the past thirty years, are moving to Vail, Colorado, in 2013. The change in location was announced monday by Burton Snowboards and Vail Resorts. After 27 years at Stratton Mountain, Vermont, and thirty years in the state, the event will be held February 25 – March 3, 2013, at the area of Vail Resort known as Golden Peak.

Along with a change in venue, the event is shifting focus. Attention has long been centered around the halfpipe at the U.S. Open, with other events like racing, rail jams and big airs shifting in and out of the lineup over the years. When the contest makes its debut in its new home next season, slopestyle, which is now an official part of the Olympic Winter Games lineup, will be stepping boldly up to claim an equal share of the spotlight.

The news that the U.S. Open will no longer be held in Vermont, the state that gave birth to both Burton snowboards and the contest itself, is roughly the equivalent of the organizers of the Rose Bowl telling football fans that the game is keeping its name, and all the people who put it on are the same – it's just no longer going to be played in Pasadena.

"I just want to thank Stratton Mountain in Vermont, where the U.S. Open took place for so long," said Jake Burton, in a statement announcing the move. "Stratton not only hosted the Open for 27 years, but also played a pivotal role in making resort riding a reality. Vail is an incredible mountain and has been my snowboarding home-away-from-home for over twenty years. I have no doubt that the U.S. Open at Vail will only grow in its legacy as the premier rider-driven event in the world."

The U.S. Open is almost as old as snowboarding itself. In its heyday, the event was less of a contest and more of an annual gathering of the tribes, and as such, it drew and created many of snowboarding's biggest names. Because so many of snowboarding's legends claim U.S. Open titles, including Craig Kelly, Terje Haakonsen, Todd Richards, Danny Kass, Kelly Clark, Shaun White, Kazu Kokubo, Torah Bright, and more, to win a halfpipe event there is to go down in the annals of the sport's history.

"I grew up nine miles from where the Open was held," said Clark, a 29-year-old native Vermonter, two-time Olympic medalist and nine-time Winter X medalist, who cut her teeth as a pre-teen at the U.S. Open. "I went as a kid to see Terje and all these big-name pros ride, and it was really inspiring to be able to experience that as a spectator. But I'm optimistic and excited about the future. It will take on a new identity in Vail and will look different than it ever has, but it still will remain one of the pinnacle events in snowboarding that embraces the core of the sport."

While the break in tradition is a clear heralding of the end of an era in snowboarding, what the contest potentially gains with the move is significant. With conditions ranging from fog to sub-zero temperatures to sleet and ice storms, weather has tormented competitors at Stratton for years. And while Vermont once was the epicenter of snowboard culture, and the U.S. Open the crown jewel of contests, the globalization of the sport and the addition of major events around the world have contributed to a packed competition calendar. Traveling to the Open's remote location has become less of a pilgrimage and more difficult for today's competitors and spectators to pull off.

Vail, meanwhile, is a two-hour drive from Denver and its international airport, and is located in an area of the Rocky Mountains that has a high concentration of snowboarders and skiers. The potential pool of spectators to draw from is huge, as is the effort that Vail is putting into keeping them entertained once they get there. Along with a festival area at the base of the venue, Vail is hosting a series of free outdoor concerts, among other things.

Burton representatives remain steadfastly tight-lipped about the company's reasons for leaving Stratton, other than to say that Burton is committed to "progression", and the move is in line with that philosophy.

Progression is a word snowboarders use like Hawaiians use the term "da kine". It can mean anything, and nothing, depending on the context. Looking at the run that the slopestyle event is to be held on, however, it appears that progression in this case refers to the course itself.

Future Olympic slopestyle gold super-contender Mark McMorris said: "It's on a perfect run. If you look back to the Honda Vail Sessions that used to be here, they were the biggest jump contests in snowboarding. It's where all the new tricks happened. [The first 1260s in a contest were landed there by David Benedek and Chas Guldemond in 2007.] This is the same idea. It's on the same face of the mountain where the Sessions were held, and will have huge jumps, and history will for sure be made."

Vail Resorts recently invested in an extensive upgrade of its snowmaking system, installing 27 automated snowmaking machines on Golden Peak. The investment has turned the area into a training center, attracting athletes like alpine ski racers Lindsey Vonn and Bode Miller to the resort to run laps in the early season. This is significant, in that downhill racers need steep-graded runs – the same type of steep grade that slopestyle course designers need to be able to build the kind of big jumps with long, steep landings that the new generation of slopestyle competitors have been begging for for the past two years.

"I know it sucks that it's leaving Vermont because it's been there forever," McMorris said. "I made my first pro podium at the Open. I have great memories from it, for sure. But Vail is so nice, and it's going to be so great to make new memories here. In the end, it's still the U.S. Open, that's not changing – it's just going to be in a different place."