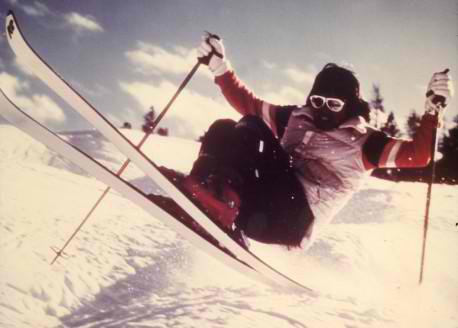 Wayne Wong is regarded by many as a living legend. He was the leading and most popular skier of his day when hotdog or freestyle skiing was emerging on the scene. The inventor of the famous “Wong Banger” and a star of countless skiing movies, Wong packaged his fame into being a true ambassador for skiing and continues to this day to convey his passion and enjoyment for the benefit of ski sports across the country. Both SKI and Powder magazines have named him among the most influential skiers in the 20th century.

Jeremy Bloom was also a star of freestyle skiing who won two World Cup titles and a World Championship and was one of America’s most visible skiing stars in the mid-2000’s. In 2003 he won gold in the dual moguls event at the World Championships and a silver in the individual moguls. Two years later he won his third World Championship medal as well as earning the moguls and overall World Cup titles. His six straight wins in World Cup competition set a record that stood for seven years. Bloom was also a football star at the University of Colorado and played for two years for the NFL’s Pittsburgh Steelers.

Kirsten Clark started racing at the age of seven, developing her skiing skills at Maine’s Sugarloaf Mountain. During her 13 year career on the U.S. Ski Team she won 12 U.S. titles and reached the World Cup podium eight times. In 2003 she won a World Championship silver medal in the super G. From 1998 to 2002 she strung together five straight U.S. downhill titles. A three time Olympian, Clark was respected for her quiet leadership and the high standards she set preparing for competition. Lindsey Vonn said of her, “Clarkie was always someone I looked up to.”

Craig Kelly is the third snowboarding honoree to be elected to the U.S. Ski and Snowboard Hall of Fame. A winner of four world titles in the early days of the sport, Kelly was one of its most influential pioneers working with Jake Burton Carpenter to open countless ski areas to the sport in the 1980s. He also played a key role during the early years of Burton Snowboards. The holder of an honors degree in chemical engineering, he starred in numerous skiing and snowboarding films over 20 years. The first true professional snowboarder, he was awarded TransWorld Snowboarding’s Lifetime Achievement Award in 2002. He died a year later in an avalanche while seeking to become the first fully certified Canadian Mountain Guide as a snowboarder.

Horst Abraham is an Austrian native who rewrote the script for American ski instruction that had a significant impact internationally. Through his work America’s ski instructors emerged as world leaders in their field. Starting with the Aspen Ski School and later the technical director for the Vail Ski School, he eventually became the education vice president for the Professional Ski Instructors of America. As the developer of what became known as the American Teaching Method in 1980, focusing on teaching skiing skills instead of skiing turns, he led the U.S. to become the world leader in snow sports education.

Hans Geier was a leading manager and developer of ski areas across the United States for nearly 30 years. From the time he completed Pennsylvania’s Ski Round Top in 1971 until his retirement in 1998, he had a large impact on the growth of the sport. Most notably he was the general manager of Steamboat Springs resort in Colorado from 1981 to 1990 when he led it through a $43 million expansion, growing annual skier visits from 360,000 to over a million and putting the resort’s finances in the black. In 1994 he was hired as president of Doppelmayr Corporation for North America, a position he held until his retirement in 1998. He also served on numerous ski association boards including the National Ski Areas Association (NSAA) and chairman of Colorado Ski Country. In 1988 the NSAA presented to him its Lifetime Achievement Award.

The induction of the Class of 2012 will take place at the Marriott Vail Resort in Vail, CO on April 13, 2013 as the concluding event for Skiing Heritage Week celebrating Vail’s 50th anniversary.

The U.S. Ski and Snowboard Hall of Fame provides highly respected perpetual national recognition to athletes competing in skiing and snowboarding and of the builders of these sports who have made the highest level of national and/or international achievement and contribution to American skiing and snowboarding. It is located in Ishpeming, MI, the birthplace of organized skiing in America, where it also serves as the headquarters for the International Skiing History Association.