Killington, Vermont - Eric Willett came out swinging Saturday in his first run in the Dew Tour's Pantech Invitational snowboard slopestyle Finals in Killington, Vermont. On a day where a recent snow was slowing down the course, many of the heavy hitters including Chas Guldemond and Mark McMorris were having trouble landing their runs. But not Willett, who came in with confidence and came through with his riding.

“You just got to be comfortable with your riding and know what you can do and just kind of go for it and send it,” Willett said. 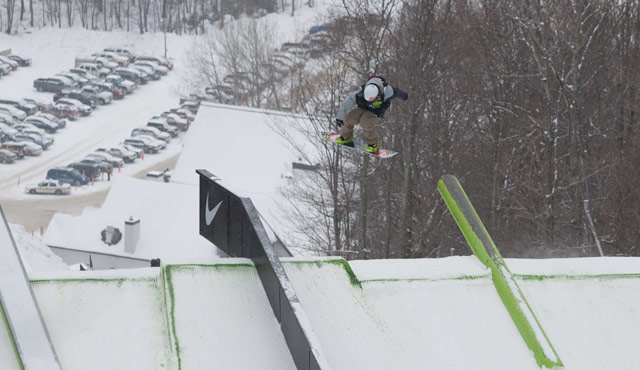 His first run scored a 91.00 and went like this: front 270 on down rail in the first section to gap front lip 270 out on the gap down in the second. On the third section he went for a front board switchout on the cannon. Next up were the three jumps, and he did a switch back 10 double into a cab 9 double to finish with a front 10 double.

He’s now in third overall in the race for the Dew Cup heading into the last event in Snowbasin.

Sebastien Toutant finshed second with 85.50, and between that and his second-place at the first event in Breckenridge, he’s in the overall lead for the season. His run went like this: bs 180 cab 180 out, gap front lip 270 out, front board to fakie, cab 9 double cork on first jump, front 10 double on second and back 10 double to finish.

“I’m stoked,” Toutant said. “It was tough conditions today since it was snowing and the speed was really bad. The first run I put down wasn’t a perfect run, but at least I got an 85.50 to help me hold onto second place. I missed my second rail on the second run, but it’s all good because with two second places I’m first on the overall Dew Tour.”

Justin Morgan, 22, was third with 80.25, after making a big impression in one of his first professional podiums.

“I worked really hard to get here and it really means the world to me," Morgan said. "One step at a time and build up, and hopefully I’ll get a few more.”