"FIS’s tyranny has gone on long enough," he writes. "It seems FIS is going out of their way to ruin the sport. FIS runs a dictatorship."

Ligety’s 2,000-word post is in response to new International Ski Federation regulations requiring straighter and longer skis with less sidecut. Ligety believes using skis similar to those used in the 1980s and 1990s is taking the sport backwards. The federation thinks the new rule will increase safety.

"The new regulations proposed were decided to improve safety of the athletes, because the injury rate is way too high, and we had to try to improve the situation," said FIS Women’s Chief Race Director, Atle Skaardal. "Since the first year, we’ve had direct communication with the top athletes. The equipment was identified by the ski experts, talking to athletes and coaches."

Ligety said he didn’t know about the new rule until it had already passed. He said 41 of the top 50 giant slalom racers have signed a petition decrying the new regulations.

"Him saying that top athletes and coaches in it from the beginning is a total lie," said Ligety when asked about Skaardal’s claim. "Being that it mostly affects giant slalom, and I’ve won three of the last four giant slalom titles, you would think that I would know. And also, since basically every single giant slalom skier is against it, you would venture to guess that they didn’t know about the changes to begin with as well." 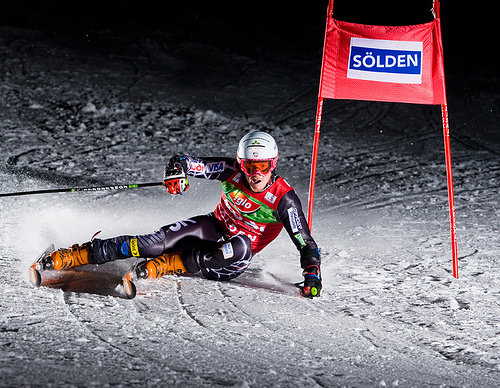 Ligety said he is taking steps to create a union so ski racers have a voice.

"Really to this point, they’ve had no reason to listen to athletes because they run a system that has never listed to athletes before," Ligety said. "They don’t like the idea of having input from outside themselves. The people that run FIS are pretty detached from the actual athletics side of it, so I guess they don’t understand anymore what it’s like to be an athlete, and what the true issues are because all the athletes want safety."

The FIS used two studies as the basis for their regulations. Data collected through the University of Oslo tracked the number of serious injuries in each discipline from 2006 to 2011. The numbers show a slight increase in the 2010-'11 season — from about 30 injuries to 40 injuries — but are otherwise stable. A second study, through the University of Salzburg, concludes from 63 interviews of athletes and coaches, that the top risk factor for racers was "System ski, binding, plate, boot," slightly ahead of "Changing snow conditions." Another project through the University of Salzburg used four Europa Cup athletes to measure force on 30-meter, 35-meter and 40-meter turning radius skis, for which the group found no statistical difference.

Ligety said the studies' conclusions aren’t significant enough for such dramatic initiatives. He thinks more athletes will be injured from using skis that they’ve never skied before. He emphasized that athletes have the most at stake here.

"As athletes we have the greatest incentive to be safe and healthy," Ligety wrote on his blog. "We all know how short our careers can be and very few of us are compensated for the risks we take. Therefore, we currently and in the future choose equipment that not only allows us the ability to be fast but to make it to the finish line safely. I have on many occasions chosen skis that were slower but had better control instead of faster and uncontrollable skis."

Ligety said there’s a conflict of interest with the SRS, the ski suppliers group. The president is the head of Atomic and the vice president is the head of Salomon. These are the only two companies that support the rule changes. Ligety said there is talk of the other ski companies, like Head, Fischer and Rossignol/Dynastar, not making skis that accommodate the new regulations.

"All the other ski companies have talked that they’re in support of the athletes in this regard," Ligety said.