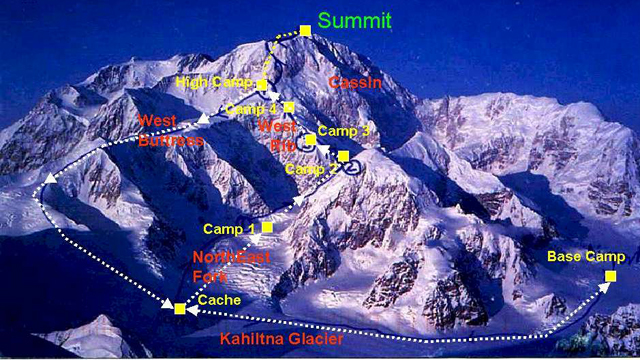 Talkeetna, Alaska — An avalanche on Mt. McKinley's West Buttress during the early morning hours of June 14, 2012 is presumed to have claimed the lives of four Japanese climbers. The five-member Miyagi Workers Alpine Federation (MWAF) expedition was descending Motorcycle Hill near 11,800-feet at 2:00 a.m. Thursday morning when an avalanche swept them all downhill. The five were traveling as one rope team, although the rope broke during the avalanche. One team member survived the event. Hitoshi Ogi, age 69 of Miyagi Prefecture, was swept into a crevasse and subsequently climbed out with minor injuries. Ogi was unable to locate his teammates in the avalanche debris. Throughout the day, Ogi descended solo to the Kahiltna Basecamp at 7,200 feet, where he reported the accident shortly after 4:00 p.m.

That evening, two NPS rangers flew to the avalanche path in the park's A-Star B3 helicopter to conduct an aerial hasty search. There was no sign of the missing climbers or their gear in the avalanche debris. In light of the time elapsed, it is presumed that the four perished in the accident. NPS rangers and volunteers began probing the debris zone on Friday to look for signs of the climbers. The four missing climbers include Mr. Yoshiaki Kato, age 64; Ms. Masako Suda, age 50; Ms. Michiko Suzuki, age 56; and Mr. Tamao Suzuki, age 63. All are from Miyagi Prefecture, Japan.

As of June 16, there are 395 mountaineers attempting routes on Mt. McKinley, the majority on the West Buttress route. Out of the 630 climbers that have already returned from expeditions this season, 234 reported reaching the summit, equating to a 37% summit rate. Substantial snowfall and windy conditions in recent weeks have kept most climbers from reaching the top.