Muskegon, MI – Join the Community Foundation for Muskegon County on Thursday, June 7 at 5:00 p.m. for a dedication ceremony honoring Sherman “Sherm” Poppen at the unveiling of the “Snurfer Sculpture” at 477 West Western, across the street from the L.C. Walker Arena.

A Muskegon native, Mr. Poppen is being honored for inventing the Snurfer, a way to surf on the snow, and his entrepreneurial success. Speakers at these events will include Cindy Larsen, president of the Muskegon Lakeshore Chamber of Commerce, Muskegon Mayor Steve Warmington, sculpture artist Jason Dreweck, and Poppen.

Following the dedication, the Muskegon Lakeshore Chamber of Commerce will host a reception at the Holiday Inn Muskegon Harbor, to celebrate Poppen’s induction into the Muskegon Business Hall of Fame.

Also included will be a showcasing of the limited edition snowboard bronze sculpture “The Turning Point” by sculpture artist Jason Dreweck, and a “Celebration of Business” reception following the dedication at the Holiday Inn Muskegon Harbor. The celebration will feature live music and an original cocktail, the “Snurfer-tini.” 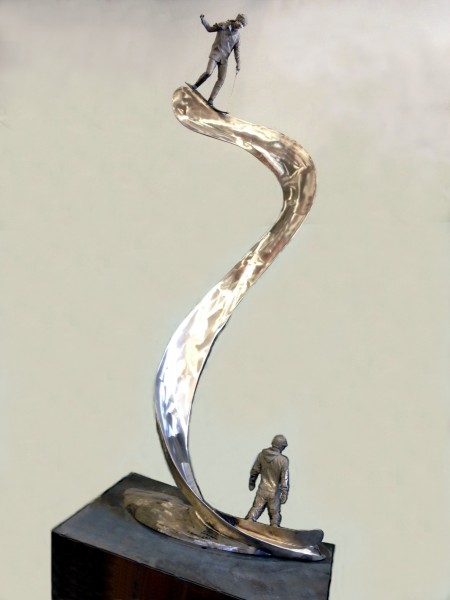 "The Muskegon Lakeshore Chamber Hall of Fame recognizes business excellence, innovation, and inventions that have made lasting contributions to industry and community,” said Cindy Larsen. “Clearly Mr. Poppen’s invention changed the course of history in winter sports. This recognition is long overdue. It is our hope that the sculpture and the award and will inspire others to see Muskegon, Michigan’s role in winter sports development and see the Muskegon Lakeshore as a winter tourism destination.”

The Snurfer was invented on Christmas Day in 1965, when Poppen’s pregnant wife, Nancy, wanted their two daughters, Wendy and Laurie, to play outside so she could get some rest. When the girls were disappointed they couldn’t safely stand up in their sled to go down the snow-covered dunes in their backyard, Poppen fastened together a pair of kid’s skis, and after some tweaking, invented Muskegon’s most famous toy, the Snurfer. The term “Snurfer” was coined by Mrs. Poppen combining the words “surf” and “snow.”

In 1968, Muskegon became home to the annual World Snurfing Classic, which was sponsored by Muskegon Community College. The first classic showcased men’s and women’s downhill events and a men’s slalom event. Ted Slater and Sally Waite were the first Snurfing champions and both received a Brunswick trophy presented by Poppen. The annual event, renamed the National Snurfing Championship in later years, continued for 12 years, and was moved to an area ski lodge in 1980 due to growing popularity and participation.

Poppen licensed the board that fueled the development of the snowboard as a piece of sporting equipment to Brunswick in 1966. The company sold 1 million Snurfers between 1966 and 1973 before discontinuing production. JEM Corporate produced and marketed the board from 1973 until the early 1980s.

Poppen’s success has been recognized through his inductions into the Snowboarding Hall of Fame in 1995 in Banff, Alberta, Canada and the Muskegon Area Sports Hall of Fame in 2001. Three original Snurfers and scans of the original paperwork for his invention were showcased at The Lemelson Center for the Study of Invention & Innovation, part of the Smithsonian in Washington, D.C. He was also featured on an episode of the Discovery Channel’s “Inventions” program for his Snurfer.

Also, Mr. Poppen was hailed as the founder of snowboarding when it became an Olympic sport 33 years after its invention.

Interestingly, Sherman Poppen took up snowboarding at the age of 67.

For more information about the history of the Snurfer, visit http://www.mashf.com/Snurfing%201966.htm.