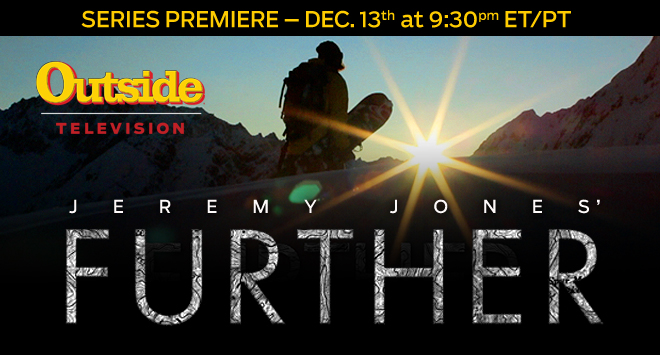 (Teton Village, Wyo.) - The award-winning producers from multimedia action sports brand Teton Gravity Research (TGR) have produced a ten-episode original series giving viewers an intense look at the personalities, adventure, drama, and excitement from two years of filming Further with Jeremy Jones. Showcasing some of the greatest snowboarding adventures on the planet, the original TV series will air exclusively on Outside Television, premiering Thursday, December 13 at 9:30pm EST with new episodes each Thursday. Outside will also provide Further fans with dual encore episodes every weekend.

The second installment in the Jeremy Jones trilogy that began with Outside Television's popular series Jeremy Jones' Deeper last year, Further explores some of the world's most remote mountain terrain while continuing Jones' mission to camp deep in the backcountry and on the summits of unridden lines to access near-vertical spines and wide-open powder fields. Join Jeremy and his crew as they push their minds and bodies Further.

“We've always thought this type of riding is perfect for a television series, which allows us to go more in-depth and show viewers more of these trips to tell the full story,” says Jeremy Jones. “We learned what's possible working on Deeper, and we've been able to build upon that experience with Further, both in terms of riding and the overall production.”

“This is exactly the sort of flagship programming we want people to identify with Outside Television,” echoes Rob Faris, senior vice president of programming and production for Outside Television, which has been expanding rapidly through Comcast Xfinity and other systems since June. “The true success of the Jeremy Jones trilogy is the overall quality of story development, characters and production rather than devising action just for the thrill of it. We look forward to continuing this franchise even beyond Deeper and Further and are fortunate to have attracted such world-class partners as Teton Gravity Research and Jeremy Jones.”

Outside Television is the only national programming network dedicated to the active outside lifestyle and the more than 141 million Americans who regularly participate. Based on Outside Magazine and its critically acclaimed brand, Outside Television embraces running, biking, skiing, hiking, sailing, surfing, kayaking, snowshoeing and any other adventures involving wind, water, snow and terrain; as well as the full spectrum of the people’s lives who engage in them. Offering exclusively high-definition programs, Outside Television is fast becoming a fixture among leading cable, satellite, telco and broadband providers’ sports and entertainment offerings. To learn more about Outside Television, visit www.outsidetelevision.com.