VALLE EL ARPA, CHILE — Three days ago, the 25-minute 4x4 road to Ski Arpa was covered in a snow-dirt soup. Now, after the finals of The North Face Chilean Freeskiing Championships, it’s paved with some of the best ski lines the remote South American cat skiing operation has ever witnessed. Freeskiing’s elite gathered this week in Los Andes, Chile, and made summer skiing history with Lars Chickering-Ayers and Sole Diaz taking the top spots on the podium.

“I like turning where the mountain makes you turn and when you’re on big mountain terrain, that’s how I ski,” said Chickering-Ayers, the veteran champion.

In the men’s field, skiing talent rivaled some of the best this tour has ever seen. Mad River Glen’s Lars Chickering-Ayers took the win with a run that lasted six turns and 45 seconds. Chickering-Ayers’ run was total commitment; he dropped fast out of the gate into an air that covered nearly 40-vertical feet of distance down the slope, hit a turn in soft snow, sailed smoothly through two more high speed turns and nailed a three on the money booter at the bottom. Rounding out the stout men’s field, were Josh Daiek, of Kirkwood, Calif., in second with a huge mid-slope three, and Kevin O’Meara of Squaw Valley, Calif., in third with one of the biggest airs off the cliff just below the start.

This competition’s women’s field was the most consistently strong and clean in FWT history. Every woman knew her line, charged it, and for the most part, stomped landings.

“I am so stoked for my win in Chile; I am the only Chilean woman in the comp and I won,” said an excited Sole Diaz. “I actually changed my run choice in the gate. I saw a couple of other girls do a new line and I knew I could ski it better.”

In a proud moment on her home country’s turf, La Parva, Chile, local Sole Diaz, took the win by a full two points over two-time tour champion Angel Collinson of Snowbird, UT. Diaz skied similarly to Chickering-Ayers descending straight down the fall-line with no hesitation and dropping air upon air with style, fluidity and control. Rounding out the women’s podium was Crystal Wright, of Jackson, Wyo., with her well-known grace and strength.

Setting the standard for the season 2012 Backcountry.com Sickbird Award, former Junior Freeskiing Champion Leo Ahrens, dropped an underflip 540 off the top booter, sticking his incredulous high-speed switch landing into the bowl before another massive three mid-venue.

With helicopters flying overhead, cat and snowmobiles shuttling skiers to the top of the mountain, this event was the complete package. And being South America in August, there were a few challenges related to weather and snowpack. The intended day two venue for the Chilean Freeskiing Championships — Stairway to Heaven — was kept closed until inspection today to preserve the snow quality. Due to overnight winds that scoured the ridge tops, competition director Bryan Barlow felt it necessary for the athletes to get a feel for the venue. When they entered the venue today, they discovered the snow coverage was too thin to safely ski the way they wanted to in the venue. The athletes met with Barlow and made a unanimous decision to not ski Stairway to Heaven, and to instead, return to the day one venue, Cornices, for the second run of the competition. Upon returning to Cornices, event organizers determined the higher scoring lines from day one had deteriorated from the impact of ski traffic and became unsafe to ski. Barlow and the athletes realized the competitors who had intended on skiing these lines, now had no opportunity to inspect new lines, probe landings, and check take-offs. Therefore event organizers made it optional for all qualified skiers to compete in the changed finals venue and made it an optional day, which would make it a best of two runs. Several competitors, who had established a lead with their day-one lines, chose not to compete, letting their day one score stand.

“Our Chilean Freeskiing Championships unofficially became the Chile Challenge,” said head judge Jim Norm Jack. “Conditions on the final face were too shallow and boney to provide a venue suitable for this level of competition. Safety being paramount, we opted to move back to Cornices. The athletes came together with the event organizers to put on one of the most exciting and spirited events we have ever seen. Relaxed and stoked, the skiers threw down dynamic runs. Today was a great celebration in the mountains and represented the full essence of our sport.” 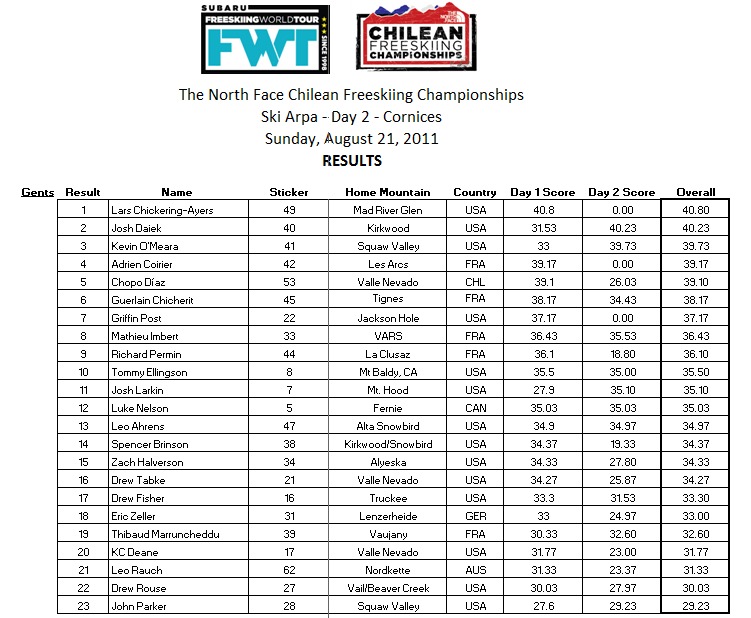