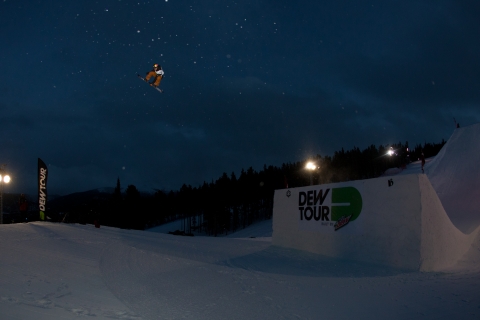 With the new age of triple corks fresh to the world of snowboarding, it only made sense for Dew Tour to introduce this extra event to take the linked line pressure off the riders and offer them up a one-hitter-quitter style competition to put their skills on display.

The format of Big Air was simple, twelve snowboarders broken into two heats of six riding in an organized jam format for eight minute periods or until five runs were completed. The top two riders from each heat automatically advanced into the final round. In addition to those four riders, the next highest score from both heats also advanced making for a five-man final – during the final round each boarder took three paced attempts for their chance at the win.

In the end it was Mark McMorris who rode out the victor of the first-ever Big Air competition at Dew Tour after landing his backside triple cork 1440 in the finals.

With regard to Dew Tour trimming the fat and expanding on their new single-stop format, McMorris had this to say, "It's way better, its a way bigger deal and there are way more people here to watch... It's a bigger deal than it used to be, and I'm stoked to be a part of it!" McMorris also went on to comment on the Big Air event being held at night, "I feel like every event should be done at night. It doesn't matter if it's snowing, it doesn't matter if it is flat light. With all the lights you can see everything so perfect and the vibes are way better at night, so Dew Tour Killed it on this one!"