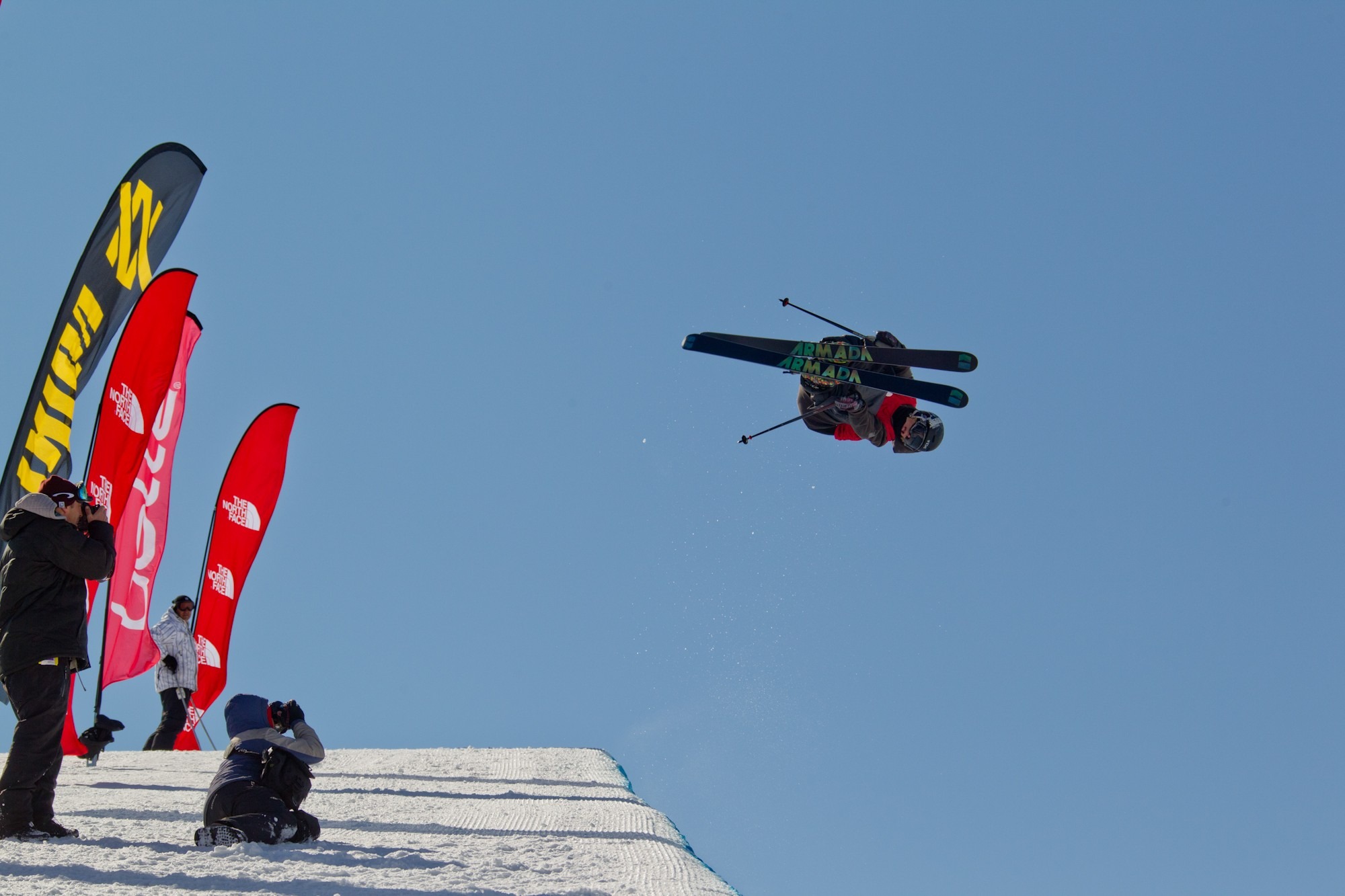 Snow Park, New Zealand — Riders were treated to another crystal-clear day Saturday at Snow Park for the halpipe competition of The North Face Freeski Open, presented by Volkl where America’s Taylor Seaton and Devin Logan took the top spots.

With wind early in the morning, the decision was made to move straight to a men’s semifinal where 20 competitors competed for the 12 spots in the finals. As the morning progressed, the winds died down and the tricks got progressively bigger.

After winning Friday's slopestyle, New Zealand’s Jossi Wells pulled the pin on today’s competition saying, “My knee is a bit sore today. I decided to be proactive and prevent possible injury so that I can keep charging hard for the rest of the season.”

When it came to the finals, Wise had to settle for second with Seaton stepping it up and defending his title. Seaton is no newcomer to the podium here in New Zealand, he won the event last year and took second the year before.

“Amplitude and execution stood out for Seaton today,” said head judge Rafael Regazzoni. “He hit everything perfectly building height as he went down the pipe. He rode really well given the wind and pipe conditions.”

Seaton was thrilled with his win saying, “It’s amazing, I couldn’t ask for anything more. It was a challenge throughout the day for sure with the winds picking up in the qualifying rounds. Also, I broke my boot.”

“This is my sixth season down here and it just keeps getting better and better. I’m having more fun every year.”

“My goal today was to make it to the podium so I’d could secure my spot in the X-Games. Hopefully, my win today will also be a big push to making it to the USA Halfpipe A team. I’m next in line for a spot.” Today’s second and third place winners Kenworthy and Wise are both currently on the US team.

“The top three men all skied at a really high level,” said Regazzoni. “It was great to see lots of the others pushing themselves to reach the level of the top riders.” 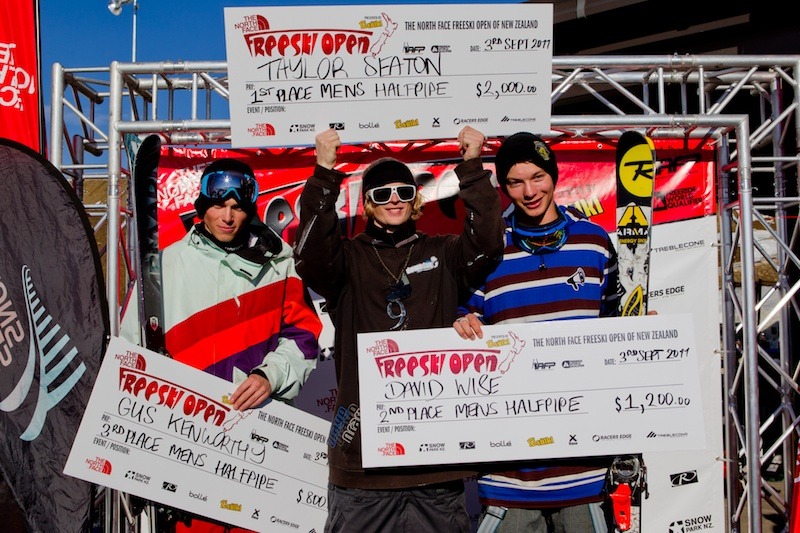 This is Logan’s final competition of the Southern Hemisphere season.

“This has been a great start to my season,” said Logan. “I’ve podiumed in the past five competitions.” After a great Southern Hemisphere season Logan is happy to be heading home. “It will be good to get home and spend time with the family before hitting the slopes again for the Northern Hemisphere season. Coming down to New Zealand has worked out really well over the past two seasons. I definitely plan to be back again. In fact, I may even be back this October for the Cardrona pipe camps.”

“Devin threw down one of the best runs I’ve ever seen in the pipe,” said Regazzoni. “She brought new tricks in including an alley oop rodeo 540 with amazing amplitude. There are only two girls in the world pulling down that trick.”

Kiwis Amy Sheehan and Janina Kuzma battled it out for the next two spots on the podium with Sheehan taking second by one point. Sheehan’s Left 540 - Right 360 - Switch Alley Oop 360 - Straight Air andLeft 720 scored her 70.5 points.

“Amy was riding really strongly and really clean,” said Regazzoni. “Her right t60 to switch right 360 is a technical combo to put high in her pipe run. The technicality of Janina’s run was right up there but her amplitude and execution was just a bit shy of Amy’s.”

Sheehan who was out with an injury during the Northern Hemisphere season has shown us she’s back in action. She came back with her rightside cork 700 today, the same trick that led to her injury. On Saturday, it was a success.

“I’m stoked that the wind died down for us,” said Sheehan. “It was great to ride with all my friends again. It’s nice to be back up there, back into it and doing well.” 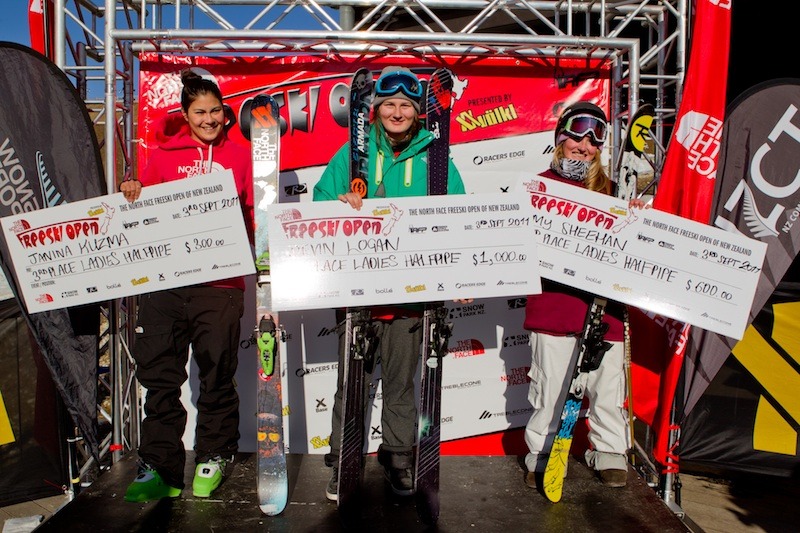 With the slopestyle and halfpipe wrapped event director Cam Craighead expressed his gratitude to the host resort, Snow Park. “This is a transitional time for the sport and the event in New Zealand,” said Craighead. “Snow Park has played a huge part in getting behind the event and helping to make it happen.”

The event Saturday was an AFP silver event earning the top competitors valuable points in the first major competition of the 2011-12 season.

“We’re happy to once again host this event in New Zealand,” said Snow Sports NZ’s acting general manager, Ross McRobie. “It’s amazing to have athletes of this caliber competing here on our soil and even more exciting to think that many of the competitors will be our future Olympians when ski halfpipe and slopestyle debut at the 2014 Olympics in Sochi.”

Saturday’s spectators were treated to a first with the appearance of the famous banana bar, a tradition that was started at the European Freeski Open in Laax.

Full results and video highlight from today’s competition are available at www.nzfreeskiopen.com.