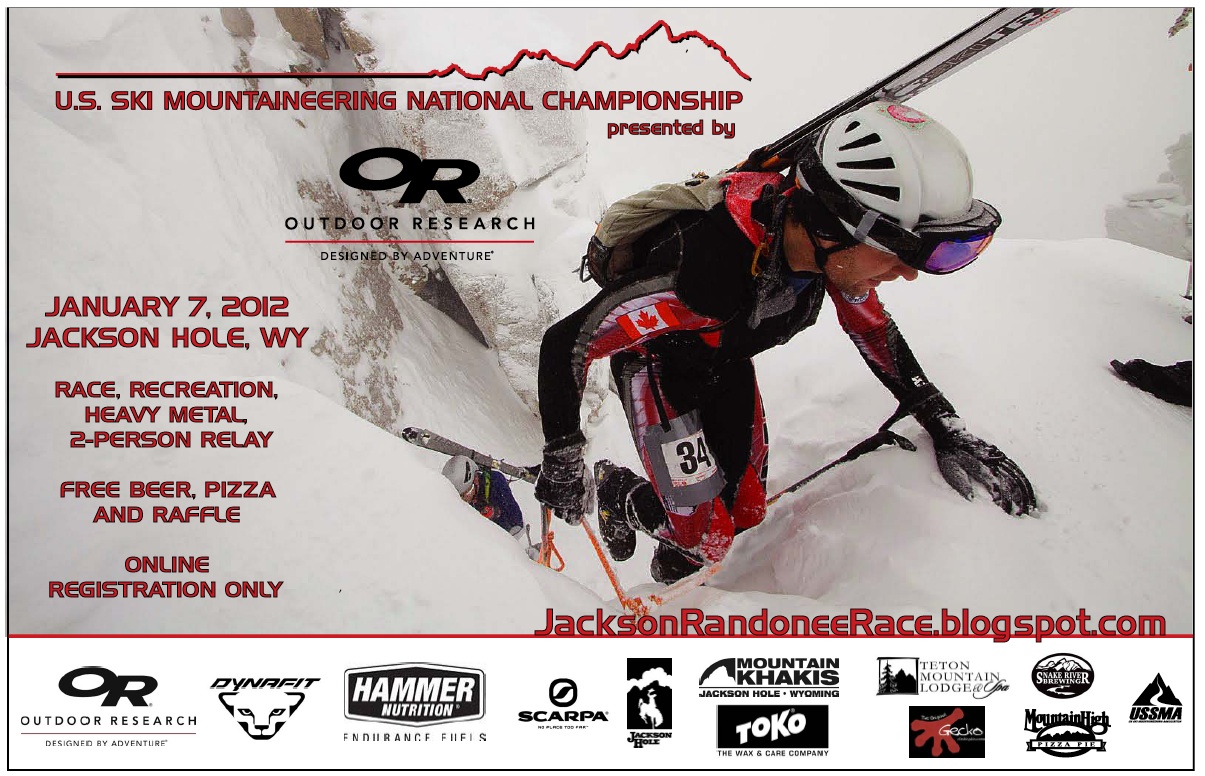 The US Ski Mountaineering National Championship Race starts at 8 a.m. tomorrow at Jackson Hole Mountain Resort. This year, the course has been altered slightly and racers will not bootpack up Corbet's Couloir, as they have in the past. Never the less, this is still a full-on spandex sufferfest on ice. Check out the course map and the course description below. 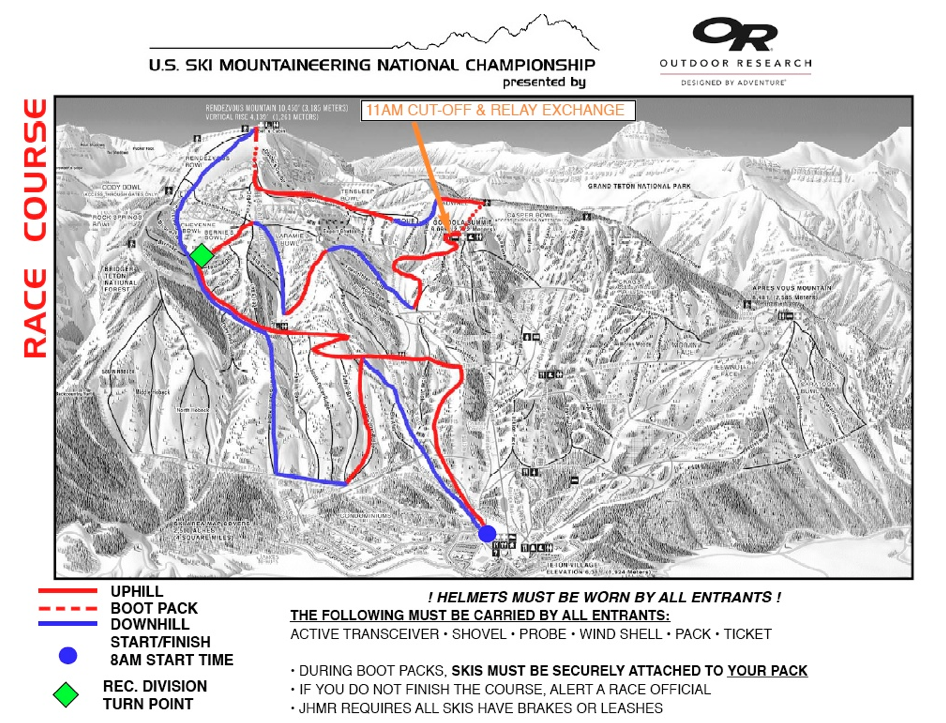 The start will be in front of the events tent, which is located just uphill from the tram dock. Racers will skin over the skier bridge, up Gros Ventre run, which is groomed. Follow GV up to South Pass Traverse (about 1400’), go left on the cat track, follow it through the “Z” turns, pass the bottom of Thunder Lift and continue to the bottom of Sublette Lift. Keep skinning straight ahead up Rendezvous trail, keeping on climber’s right. This is also groomed. Where Rendezvous trail goes left and gets steep, racers will continue straight ahead into Cheyenne Bowl. From there, the skin track will be off-piste, heading right and up Bird-in-the-Hand (or liquor cabinet) to a transition just below Laramie Traverse.

Racers will pull skins and ski down Flip Point, staying far skier’s right (there is a large rock outcropping to the left and racers must keep it on their left, staying off the groomed run of Laramie Bowl). Continue down the ungroomed section of Laramie Bowl until you pass the panel gates near the bottom of Alta 1 chute. From here you can get on the groomed run and ski almost to the bottom of Sublette Lift. Look for a transition on the left side of the run at the base of Grand Woods.

Put skins back on for an off-piste skin up Grand Woods until you see a cat track directly above. This is Grand Traverse and racers will take the switchback up and across the top of Grand run to a transition on Grand Traverse directly above the entrance to Tower 3 chute (which is closed). Pull skins here.

Ski down Grand Traverse about 100’ to the entrance to Paintbrush. Look for a course marshal here to direct you into the run as the entrance is quite rocky. Be wary of rocks but the skiing is quite good. As Paintbrush flattens out, racers will head right into Toilet Bowl. This entrance is a bit tricky, so, again, look for a marshal to direct you. Do not go left out onto Rag Run. Ski Toilet Bowl down to where it meets Amphitheater. Ski almost directly across the groomed Amphitheater run to a transition on skier’s left at the top of Dude’s Ditch. This is a deep ditch that is separated from Amphitheater by a rope. Put skins back on here. 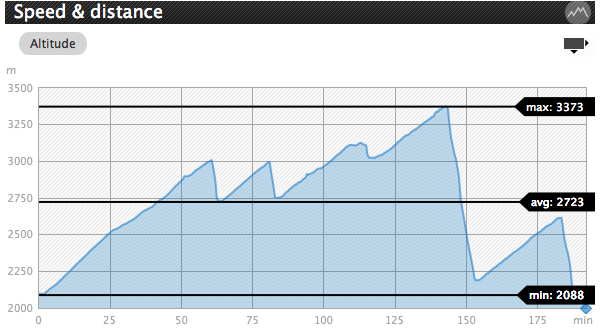 Skin up climber’s right of Amphitheater until you get to a cat track. Follow this cat track to the right (called Lupine), through a couple switchbacks , to the building at the top of the Gondola. Skin around the building, keeping it to your right, until you are near the back. (There is an aid station here. This is also where the 11am time cut-off will be enforced) This is where the bootpack up the White Spider starts. Boot straight up through the trees, then follow the rope line to the top of the Headwall. There is a building there called the Jailhouse. Here it is “racer’s choice” as to the fastest way across the Headwall. You can boot, ski or skin to the large rock outcropping at the top of Pepi’s Bench bootpack. If you haven’t already, pull skins here and ski down Shot 10 (also called Coombs). Be careful on the entrance as the snow may be thin on the initial rollover. Ski down Shot 10 and traverse right across the bench, through the trees and out into the Cirque. Do not descend too far into the Cirque. Look for the panel gates indicating a transition. Put skins on.

Skin up and out of the Cirque, past the bottom of Pepi’s Bench bootpack. Follow the skier track and when it opens up, keep climber’s right as you climb up into Tensleep Bowl. Skin up into Tensleep (with Corbet’s Couloir looming directly above) and follow pin flags to the left, making a climbing traverse around the base of East Ridge. Skin along the summer road, under Sublette Lift (slight descent) then climb up toward Hanging Rock run. Skin across Hanging Rock, being careful to look for skiers descending from Sublette Lift. Transition to a boot pack after crossing the run and boot up climber’s right of Rendezvous Bowl, keeping East Ridge to your right. Skins will come back on to take you to the top of Rendezvous Peak. Pull skins in front of Corbet’s Cabin.

Ski down and right into Rendezvous Bowl. When it flattens and traffic is coming from your left, go straight to Central Chute. Do not go down groomed Rendezvous Trail. Central Chute pops you out onto a bench, traverse left about 50’ and ski down the second part of Central Chute down into Cheyenne Bowl. Ski down and out of Cheyenne Bowl onto Rendezvous Trail, which will flatten and become a wide cat track. When it rolls steeper, just before the base of Sublette Lift, go hard right onto Lower Sublette Ridge. There will be a marshal and fencing directing you where to go. Ski down, staying mainly on the ridge, or slightly right, all the way down to the bottom cat track. Go left here. Keep straight when skier traffic turns right to the base of Union Pass Lift. Just before the trail starts to climb, there is a transition to put skins on.

Skin up North Colter Ridge, following pin flags, to South Pass Traverse. Pull skins for the last time on the cat track. The marshal will direct you down Lander Bowl, angling left to meet up with Tram Line. Once in the gut of Tram Line, follow it down. It will open up onto a groomed run. Look for merging traffic from both directions as several runs join together. Follow the course marshal’s directions and signs to the base of the tram across the skier bridge to the finish in front of the events tent.

In short, the rec. course has the same first climb up into Cheyenne Bowl. When the pro course goes up Bird-in-the-Hand, rec. racers will pull skins and ski down Cheyenne Bowl, merge with Rendezvous Trail and make the hard right onto Sublette Ridge. Ski the same descent as the pros down Sublette Ridge to Union Pass Traverse. Stay left and straight until at the base of North Colter Ridge. Skins on to climb North Colter to South Pass. Pull skins to descend Lander Bowl into Tram Line down to the finish at the events tent.

Want to race? You can sign up at jacksonrandoneerace.blogspot.com. However, you must register by the end of today.

Here are some important times:

7:00am:: Event tent is open, there is no day-of registration
7:00am - 7:30am :: Gear check. You MUST have a gear check before you will be allowed
on the start line. Gear check is in the event tent.
7:45am :: Begin to move toward the start line. Start line is in front of the Event Tent.
7:55am :: You must be at the start. First row will be seeded, remaining rows are self-seed.
8:00am :: Start time. The race MUST start at 8:00am SHARP. If you are not on the line and
ready, we will start without you. This is NOT a Le Mans start. You will start in your skis. In
the event that the start is delayed due to avalanche control, an announcement will be
made in the start area.
1:30pm :: Awards ceremony and raffle. You must be present to win a prize.
2:00pm-ish :: Beer and pizza