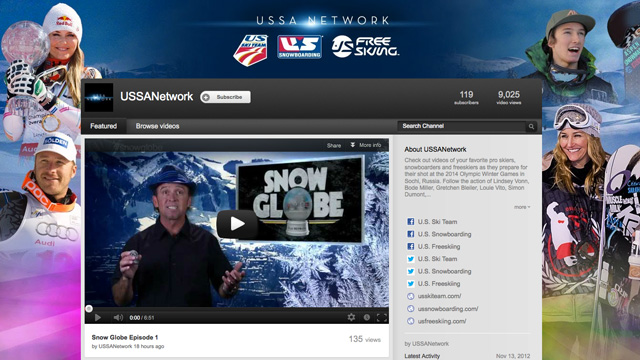 PARK CITY, UT – The fast-paced competition action and globetrotting lifestyles of America’s top Olympic skiers and snowboarders will be featured on a new channel, the USSA Network, to be launched by the U.S. Ski and Snowboard Association on YouTube.

“Americans are motivated by athletic success and the USSA Network represents an opportunity to tell that story as well as provide insights into the lifestyles of our champions,” Bill Marolt, President and CEO of USSA said. “YouTube is the perfect channel to complement our traditional broadcast coverage.”

“The USSA Network on YouTube will speak to a whole new generation of future stars looking to tear it up on the snow,” Claude Rubail, YouTube Global Head of Sports said. “We’re anxious to partner with the USSA as it works to inspire the YouTube generation with its new channel offerings.”

The USSA Network will be easy to find on YouTube, providing fans with the opportunity to subscribe on the channel's homepage, www.youtube.com/ussanetwork