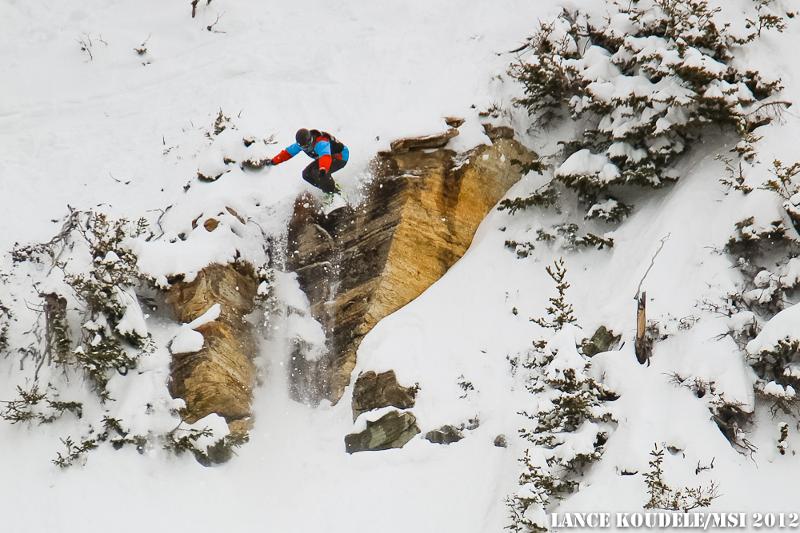 Salt Lake City, Utah — Despite the spring storm that rolled into Snowbird this morning, the final day of The North Face Masters of Snowboarding, presented by PrimaLoft, went down with great success. After narrowing the field from Day One, thirty-five of the world's best big-mountain snowboarders gathered at the top of "North Baldy" for a one-run final. As the last stop of the series, the suspense-filled final day resulted in Shannan Yates and Sammy Luebke winning both the Snowbird event and the overall tour title.

"We had challenging conditions today, but the fresh snow for the women's final gave us a great start to the day," said Competition Director Patrick Brennan. "Heavy fog moved in mid-day, yet we worked through it, with the riders doing a great job at the final stop of the 2012 season."

Winning her sixth Master's event was Shannan Yates, of Snowbird, posting up the top score of 80.17, which was eight points ahead of the next female rider. Yates used her local knowledge of the venue to flow through her run without hesitation, hitting multiple features along the way. Her win here today clinched Yates's second overall tour title, making her the winningest female rider in tour history.

Fellow Snowbird rider Beth Weissman placed second in the ladies' field with a score of 72. 83, earned with her strong airs and fluid riding. Another Utah local, Cindi Lou Grant, took the third podium spot with a 72.00.

Taking the men's victory was Lib Tech athlete Sammy Luebke, of Squaw Valley. His 85.83 in today's finals clinched his win for both the Snowbird event and the overall tour title. Luebke started his winning run with several stylish airs; ripping fast powder turns through the middle section and finishing his run with a technical drop in the "Amphitheater" area of the venue.

Taking a well-deserved second place was Fernie's Jamie Rizzuto. After barely missing the podium all season, Rizzuto threw down one of the most memorable runs of the day to earn an 83.33 and second overall for the season. Third place went to Brian Bozack, of Sugar Bowl, with a score of 78.17.

Awarded to the top male and female rider at Snowbird is one of the most coveted prizes in big mountain snowboarding - the Katana Sword.

Receiving The North Face Young Gun Overall Series Award for this season was The North Face athlete Blake Paul, of Jackson Hole. This award recognizes talented up-and-coming riders who show promise in big-mountain snowboarding. The nineteen-year-old Paul made a huge impression on the judges and crowd, winning Day One with ease.

This wraps a successful fifth season for The North Face Masters of Snowboarding presented by PrimaLoft.

For information about the series visit http://thenorthfacemasters.com/ 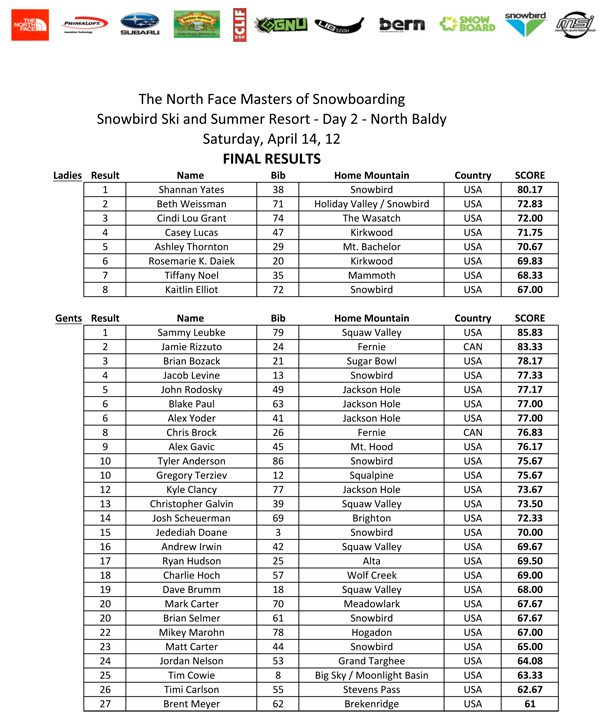