Nick McNutt was one of the undisputed standouts of the inaugural Co-Lab field. With an ability to land and ski switch in powder that has rarely been matched since his idol Pep Fujas began doing it ten years ago, McNutt had the most creative segment, and his nosebutter take-offs, giant switch landings, and uncanny ability to flow through pillow fields earned him his place among the dozen entries to make the final Co-Lab film, as well as a place in the athlete roster for TGR's 2014 ski film, Almost Ablaze.

He grew up in the tiny mining town of Kimberly, British Columbia, made his own twin tips with his Dad, earned his winters off in Whistler thanks to his reputation as a hard-working carpenter in the off season, and when PYP Productions dissolved and TGR’s Co-Lab presented the opportunity to make it to the big leagues, Nick and filmer Scotty Titterington put all their chips on the table and went for it.

What did you think you were going to have to do to stand a chance of winning the Co-Lab?

I mean, I always have a mental trick list with personal goals that are always trying to one-up what I’ve done in years past, but I figured there wouldn’t be that many guys doing the switch powder thing, and that’s kid of what I’ve been doing – like that switch pillow line – and I feel like I stepped up my tricks a bit. I hadn’t been doing too many big rotations, and I started doing a few more 900’s and bigger tricks.

Did you train in the park to get all those tricks down?

Where I grew up in the East Kootenays, if you wanted to ride pow you had to go to Fernie or Revelstoke, which was such a drive, but we all had passes to Kimberley and they had a pretty good park. Before I bought a pair of some of the first Line 1260s, me and my dad twin-tipped a pair of Elan carving skis with a heat gun and I just started to try and ski backwards. I became fascinated with the fact that skiing switch was so unconventional and people were like, “What the fuck are you doing?!?”So I spent a lot of time riding backwards when I was younger.

I moved to Whistler right after high school and mostly to mountain bike, but I fell off biking pretty much as soon as I moved there. The winters are so long and I started to want to take them off entirely, so I couldn’t afford to get hurt in the summertime biking, and I just focused on working. I’m a carpenter. My dad was a general contractor, so I picked up a lot of power tool skills when I was quite young, and he always told me it’d be pretty smart to learn a trade.

I built a bit of a reputation as a hard worker and focused on framing and concrete form work for lots of high-end renovations. Usually I’ll work hard from the beginning of May until Christmas, and then I usually take off for four months. I never coached at the summer camps. It seems like it’d be fun to jib all summer, but that wouldn’t pay for a snowmobile.

I found I really enjoyed working with wood in high school. I got a laboring job right when I moved to Whistler, and just went from there and built a bit of a reputation as a hard worker and focused on framing and concrete form work for lots of high-end renovations. Usually I’ll work hard from the beginning of May until Christmas, and then I usually take off for four months. I never coached at the summer camps. It seems like it’d be fun to jib all summer, but that wouldn’t pay for a snowmobile.

So what kind of terrain or hits were you really looking to get with this Co-Lab edit?

It’s such an expanse in Whistler that there’s always something new to find. I get most of my fun out of just pat-downs – rolling up to a little step down or a cliff or a pillow line and just kind of slipping out an in-run, or just skiing pillows. But we used Google Earth quite a bit - it’s a pretty good tool – and we’d kind of scope around where we usually go. And it’s crazy because people will be sledding for ten years and will sled straight past stuff that you would never know is there if you didn’t have Google Earth or if you didn’t poke your head around the corner. 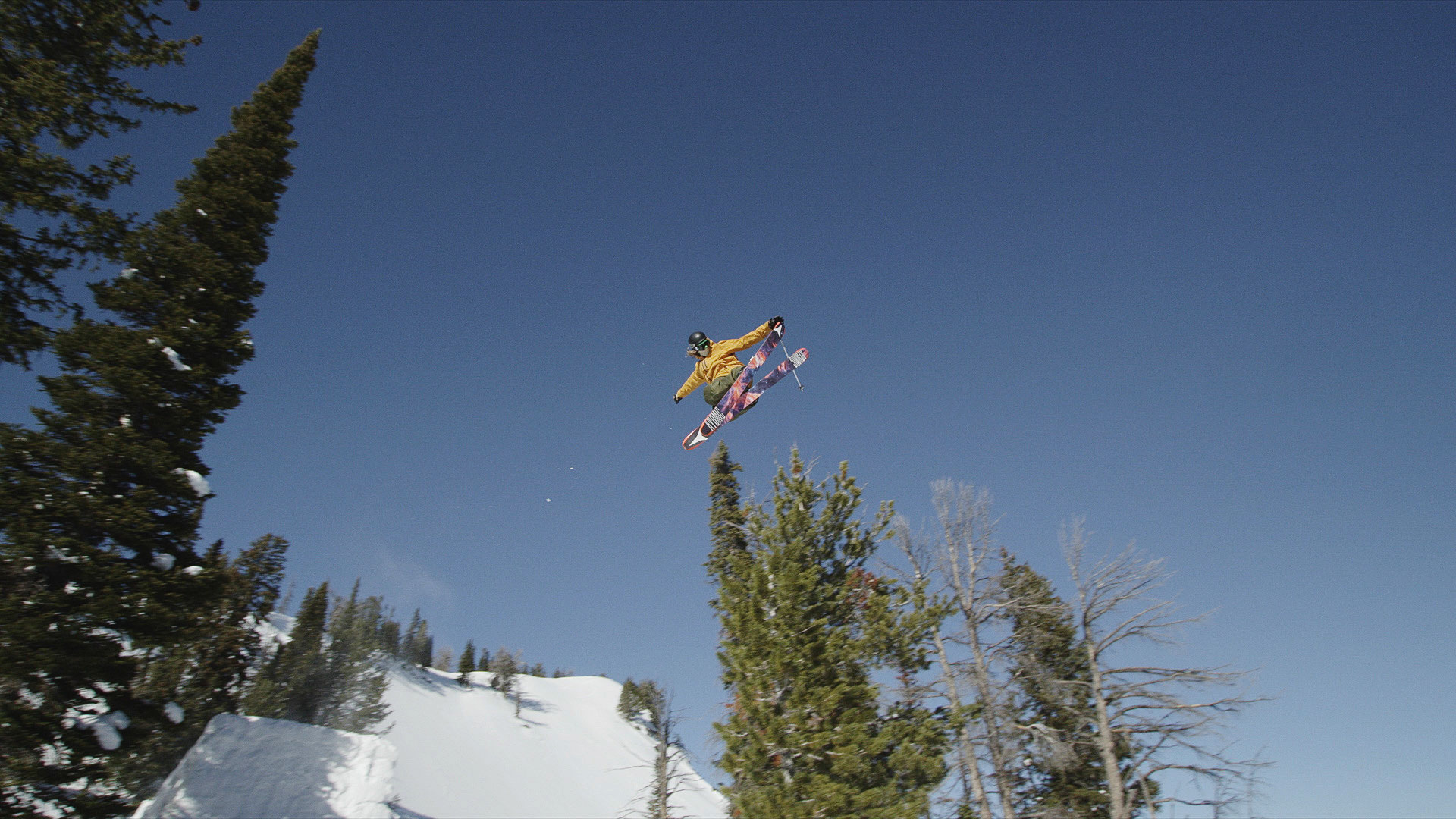 McNutt throwing down in the Wyoming backcountry during the filming for Almost Ablaze. TGR photo.

So we shot a lot around two different mountains nearly right in town that everyone just blows by at seventy kilometers an hour. We found a few things this past year that were A-level pillow fields and were just so close to town that we couldn’t believe it. Google Earth is getting so good now where you can tilt the screen and see the pitch of the slope and spin and change your perspective and see different angles of a certain line, and that helped us pick out a bunch of new zones.

And what was the motivation to do so many butters?

I watched Eric Iberg’s film IDEA on repeat for an entire winter and I even rode without poles for over a full year and bought Hellbents, and that was when it all started for me. I started doing nosebutters in the park and onto rails and just got comfortable enough with them that I could take them to more exposed terrain and bigger features. I’ve done a million nosebutters – you’ll find entire old park edits of me just doing nosebutters. Those Nimbus guys just had a bit more of a free style, it wasn’t just typical riding through powder and pole-planting and whatnot.

I rode switch a lot in powder. I can’t tell you how many times I’ve broken my nose bashing myself in the face from landing switch and hitting my knees in my face. It was just trial and error to find that fine balance point and trying it over and over and over. I mean, three out of four cliffs I’ll land switch. It’s all practice for when you’re out there filming.

And I rode switch a lot in powder. I can’t tell you how many times I’ve broken my nose bashing myself in the face from landing switch and hitting my knees in my face. It was just trial and error to find that fine balance point and trying it over and over and over. I mean, three out of four cliffs I’ll land switch. It’s all practice for when you’re out there filming. 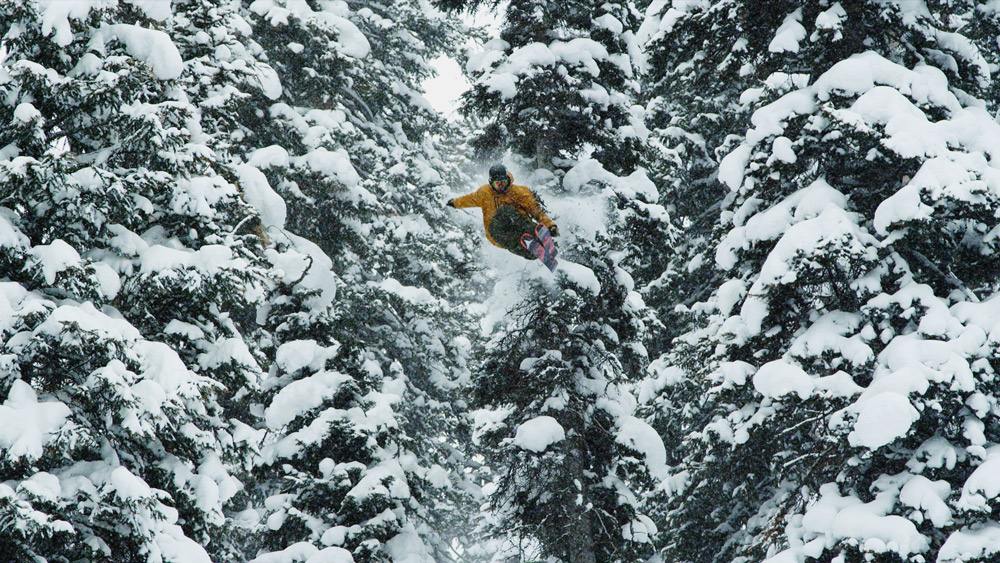 Nick McNutt blasting through the trees in Jackson Hole during the filming for Almost Ablaze. TGR photo.

But I definitely started to make some people think I was a bit crazy. You have your certain hits or cliffs that you’re super comfortable with, and on a powder day when it’s on, you go full speed and just blast a 180 on your first run. And there’ll be a few people contemplating hitting it and just thinking “What the hell does this guy think he’s doing?!?” When really, in reality, I’ve done it fifty times off that exact feature. It’s just really about repeating it and doing it over and over and over.

What was that ender 180 like in your Co-Lab segment?

Well that was actually my fourth hit. My first hit was a three, my second hit was a seven that I didn’t like, my third was another seven I didn’t like, and at that point my friend Flo Goeller, who was also in the Co-Lab, had landed a really nice cork 7 on that jump. I didn’t feel like doing another 7, and I hadn’t crashed on that jump yet and I had the speed dialed on that jump, so I felt pretty confident of being able to do that 180. I pretty much straight aired until two thirds of the way through when I commited to the 180. And then I stomped in that clean spot of snow and was going pretty hot; it was a steep landing and I was going super fast. But it flattened out a bit after and I was able to control my speed.

And what were you looking for in a song?

I really wanted to do a bit of a 70’s-style acid rock, trippy rock kind of song. I used the Frendly Music site and I spent probably 10 or 12 hours listening to mostly garbage. I’d make a playlist of songs I liked after the first minute, and the next day I’d go back and delete a bunch of songs I didn’t like. We’d put the edit together to a different song that TGR had recommended, and we threw this song, “Wrong Number” by Heavy Deeds, over the timeline and it worked great, so we went with it. It really worked with the ups and downs of the edit.

At the beginning it’s sort of this “rough times in the backcountry” feel and then it builds up and at the one minute mark it builds up and kind of stays there for two minutes, and then at the end it feathers off for the spring booters. But it took a lot of searching and a lot of listening to painful stuff.

What was the experience like after your edit first went up?

Well, right when it went up, obviously some of my friends who hadn’t seen it yet were hitting me up letting me know there were stoked on it. Then I watched all the edits, as I was really intrigued to see what the competition was like. Dale’s was one of the first ones I saw and I knew there was some heated competition, but as I went through more and more of the list, I thought I had a decent chance, and thought that a lot of the run-of-the-mill edits that come out on Newschoolers could have done well in that contest.

Then it was a bit of a mission with the social media hype, but I was able to collect enough votes to get into the second round, a couple of the guys from TGR were hitting me up and letting me know that I should probably come down for the Co-Lab announcement and the Way of Life premiere.

At that point I wasn’t really thinking I would go, but I got a couple more nice e-mails from them telling me it’d be nice if I came down and that they’d like to meet me. So me and Flo decided to drive down in my girfriend’s car, and when we showed up, we went to this TGR golf tournament. That’s where I met Sage [Cattabriga-Alosa] and the rest of the skiers and Todd and Steve [Jones], who both seem really excited to meet me and said they really liked my edit, and that regardless of what happened with the Co-Lab, that they’d like to work with me in the future.

That [the Co-Lab] was huge–it was a pretty big break for me. I would have released that footage anyways, but without that contest, it wouldn’t have gotten the same traction and the right people wouldn’t have seen it.

That [the Co-Lab] was huge–it was a pretty big break for me. I would have released that footage anyways, but without that contest, it wouldn’t have gotten the same traction and the right people wouldn’t have seen it.

Watch Nick McNutt in this year's ski film, Almost Ablaze, which premieres in Jackson Hole on September 13th. He's packing a full segment, along with appearances in several others. This week Nick's also being featured in a Q&A session over on Newschoolers.com, so be sure to drop a question over there!