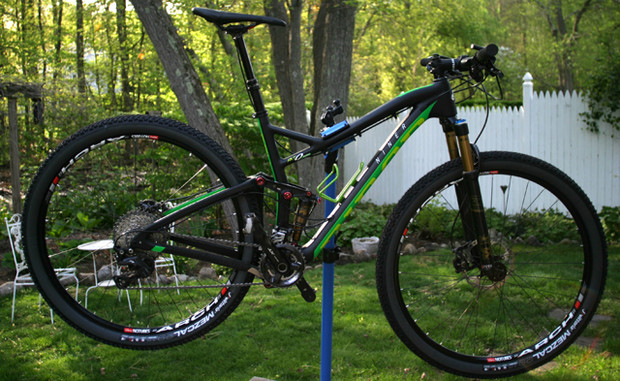 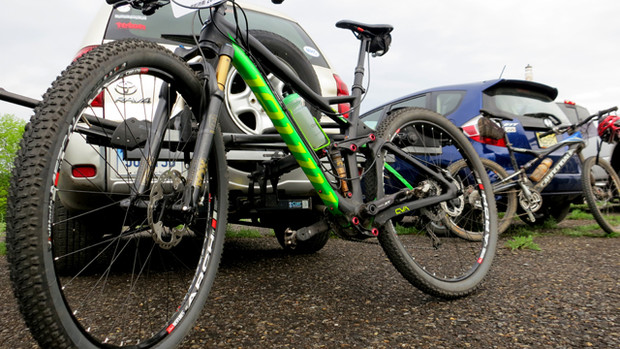 And then... pedal some more. GW photo.

The Stan’s Arch wheels on the RKT RDO arrived tubeless, which my knuckles and forearms appreciated. The double chainring was a bit of a head-scratcher, but Niner has a ton of 1x setups and this was the luck of the draw. There are advantages to a double, of course. 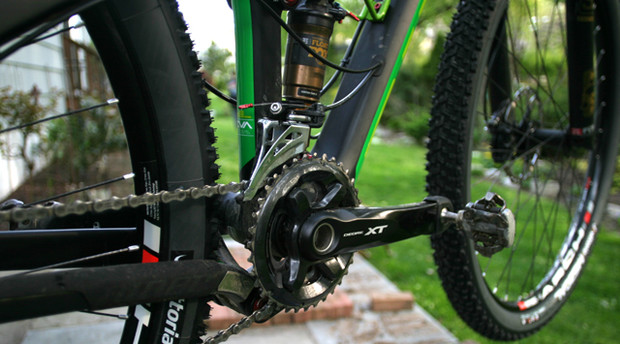 I raced it with the stock fixed carbon seatpost. If you want a dropper, you can route one externally or internally, which I did for trail rides. Overall though, I’m cool with the race positioning of this bike, which means trying to save weight wherever possible.

On their site, Niner says the medium will fit up to 6' humans. Traditionally their bikes have run a bit big and, at 5’11”, I fit on the medium RKT, but just barely. I slid the saddle back all the way on the rails. Though the smaller size made the bike really agile for me.

The 710 mm handlebars were a little narrower than I’d usually run. Again, this is something anybody can change when they buy one. I’d love to see all bikes ship with a wide-ass handlebar and just have the shop trim it to your size.

The Shimano XT component group is super solid and a great value. I had one of Niner’s “3-star” builds, which retails for $5700 and includes Kashima-coated Fox suspension. You can choose a SRAM build, too. I liked how this build didn’t mix SRAM shifting whith Shimano brakes, so everything matched up nice on the cockpit. 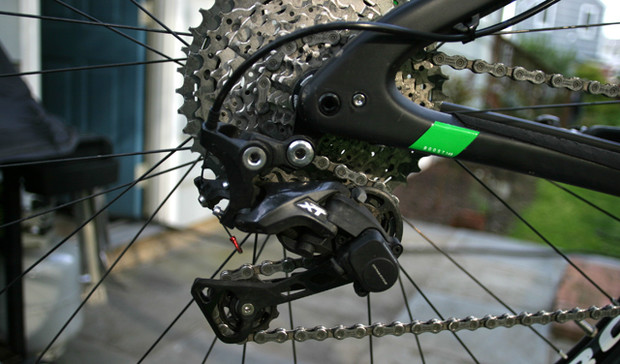 For 2016, the Fox’s Float fork's three-position damper has been very successfully re-tuned. At 180 lbs, running 30% sag, it felt smooth and deeper than its 100 mm of travel. Truthfully, the supple initial stroke sucked up some stuff I thought I was going to get bounced on after unwise line choices. I rarely fiddled with the damper switch. If you’re facing a long, steady climb, flip it to firm. But for most riding, climbs included, wide open works great.

When you’re racing, you don’t want to waste time fiddling with stuff unless absolutely necessary. You can also add air volume spaces to the fork for a more progressive feel. But again, it felt fine to me as is. 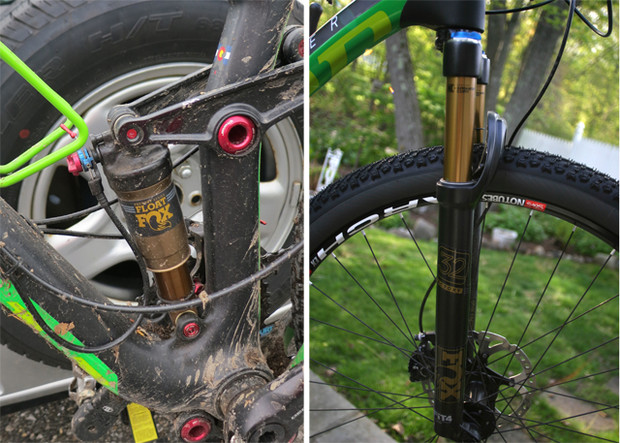 And, last but not least, a Fox DPS shock with a lockout. If you’re a fan of lockouts, you’ll like this one. It’s easy to engage and release. Though I’m not sure why there are three positions, as open and locked would be fine. I guess because the shock has three. The shock was very smooth and reliable, though how the CVA suspension worked seemed to vary slightly between heavier riders (me) and lighter riders (Lucas). 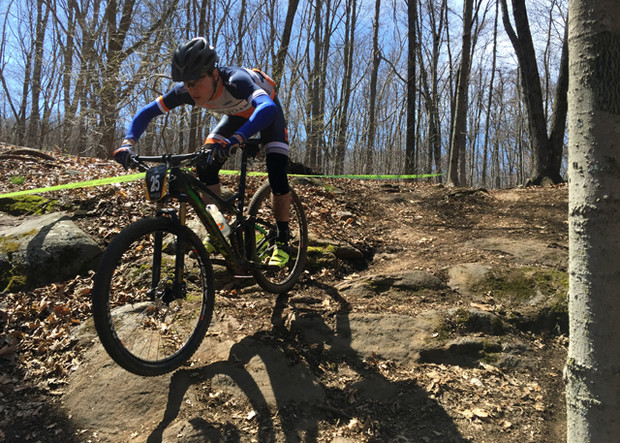 To test it properly, aside from riding it myself, I lent it to Lucas Smallidge. Lucas is lighter, shorter and a BUNCH faster than me racing cross-country. He's the NY State NICA XC champion. Below you'll find both our impressions on the RKT's ride. We rode the exact same bike, adjusting it only slightly for our own comfort. 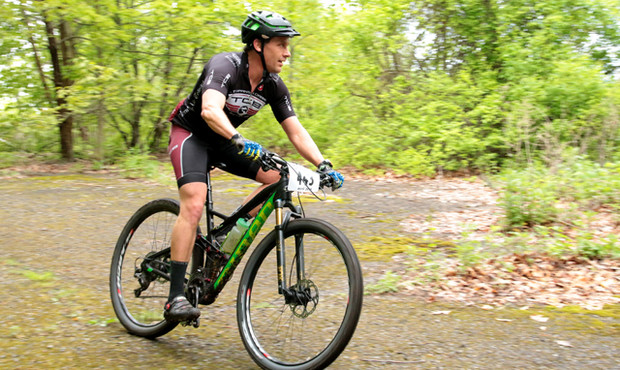 Gunnar: Old, heavy, seen it all. Impress me, bitch!

It’s kinda nice to have geometry which allows you to laser-point a bike between rocks with confidence. With all the long, slack front ends out there, it was refreshing to ride something this responsive.

Of course most manufacturers now make their short-travel XC frames ‘trail-worthy’. Meaning the bikes can hang on your average tech-y ride. World cup XC courses are getting burlier anyways. Julian Absalom rides with a dropper post and he, as well as Nino Shurter, are mostly on full suspension. The RKT RDO definitely travels down this 'trail', but thankfully stops short of trying to be something it's not.

Make no mistake, the RKT RDO does not have over-the bars or twitchy geometry--I ran into my share of nasty rock gardens and chutes and the bike tracked over them just fine--but it is an XC race geometry, different than today’s 130 mm all-purpose rigs.

It will do short jumps and drops and play around, if you ask it nicely. And it descends really well; better than you’d expect. But you must drive the RKT, not cruise in it. Get it with a 120mm fork (Niner offers this) if you want a slacker feel.

I definitely felt I had an advantage over guys saving weight and suffering with hardtails.

Anyway, it's race bike, so we raced it. Our RKT RDO did the Rumble in the Jungle H2H XC race in New Jersey, the Hop Brook Root 66 XC race in Connecticut, both Cat 2 (me) and Pro (Lucas) races, and the NICA NY State Championships (won by Lucas).

Of course, I also took it for trail and lunch rides, where it performed great. As I mentioned, it’s fun and fast. It accelerates quickly and is comfortable when up to speed. The bike is confident about boosting off a root or over a New England rock-wall gap.

The bike does climb much better when its suspension is locked out. Perhaps that's the tradeoff for the 90mm CVA/Fox suspension being so supple in the early stroke. Exactly when to use that lockout is something you’ll have to discover for yourself. 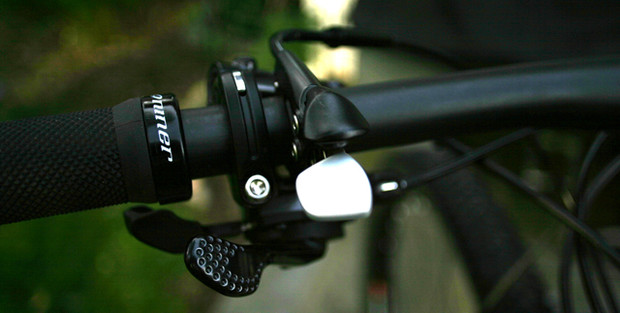 The much-discussed lockout. Lock it in. GW photo.

Usually I’m not a fan of stuff on my handlebar, when making quick decisions, having too many options can be a double-edged sword. BUT I’m starting to appreciate having two different modes on one bike. I mean, why not? In the past, suspension designs have maxed platform damping to the point where climb modes or lockouts on a shock became irrelevant. On trail rides, the lockout lets you blast up a short climb. During a race, if you really know the course or there’s a long climb, it’s also an advantage.

The CVA suspension is supple; It keeps you tracking through rough stuff and flows on fast, swoopy trails. I definitely felt I had an advantage over guys saving weight and suffering with hardtails. But to hit the suspension’s sweetspot, you must run the proper 30% sag, and with only 90mm of travel, you might have to get out the measuring tape to hit that.

For a while I added a dropper post, because I wanted one, but my handlebars became too crowded. I had six things to twiddle with: shifting (L,R), braking, dropper post and the lockout. Of course, to be fair, the dropper was my choice. I would trade the dropper the front mech.

Too much hoo-ha on my handlebars. GW photo.

The XT shifting is precise and even on the nastiest terrain, it behaved perfectly. I never dropped a chain or skipped. Also, I appreciate the 11-42 cassette, because... why would you not put one there? Though with that spacing, why is there a front derailleur? If I lived in a high-altitude western state or Europe, and had to grind away on climbs for hours, I guess I’d like it. But that’s the rationalization I make every time I review a double. 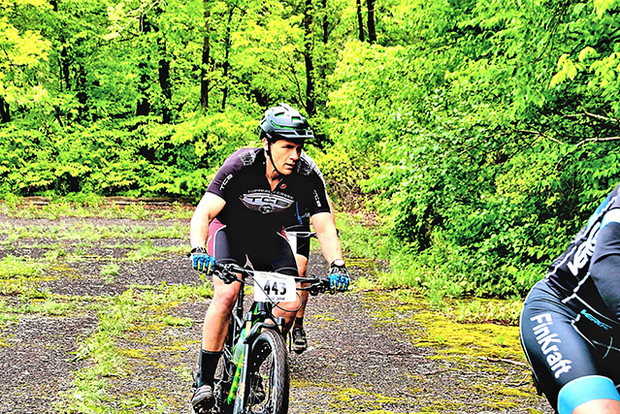 I did NOT put this god-awful filter on the photo. It came that way from the race photographer.

Here in the East, it’s all about dealing with fast changes and tech-y stuff you can’t prepare for. With a 26/36 front, you’re in 36 most of the time but closer to the top end of the cassette stack. 36 is just too hard for doing everything and, during a race where you have to do things fast, it’s a bit annoying to dump into a smaller chainring just to urge the bike over a big step-up.

As mentioned, there are a ton of build options for this bike, including a 1X in the same price point, so it shouldn’t be an issue. Just choose for where you are. 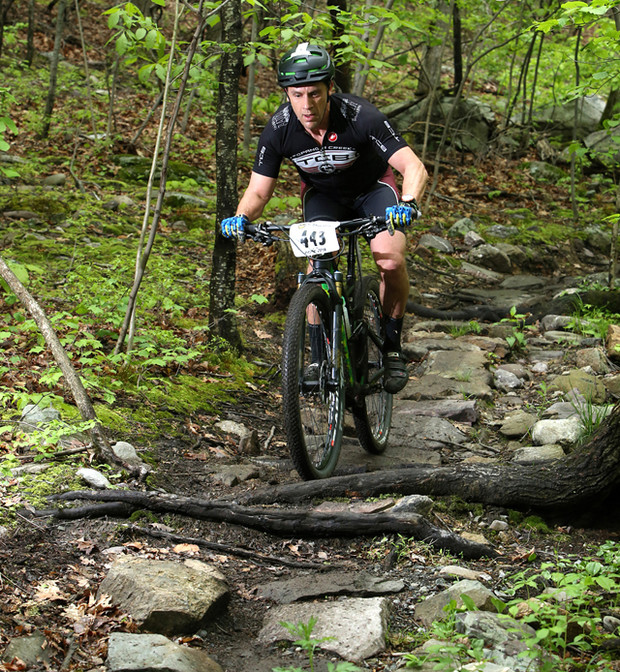 Ok, I know, don't look down at the rock. In my defense, it was super wet and slippery.

The bike comes with a long-ish stem, especially for today’s fashion. But that’s personal preference. If I bought a RKT to be my daily driver, I would get a large and run a shorter stem. Though for racing and quick handling, medium was good.

Do I like this bike? Yeah, a lot. It’s plush and fast–two things that don’t always go together. I almost wish I had it longer to just trail ride. It’s an incredibly capable race bike. If you buy it for that, I’d say get the version with a single ring. It is a FANTASTIC bike for longer endurance races.

If you’re going to buy it as your one and only trail bike that can do a race or two, think about the 120mm fork unless you like a more laser-like geometry. 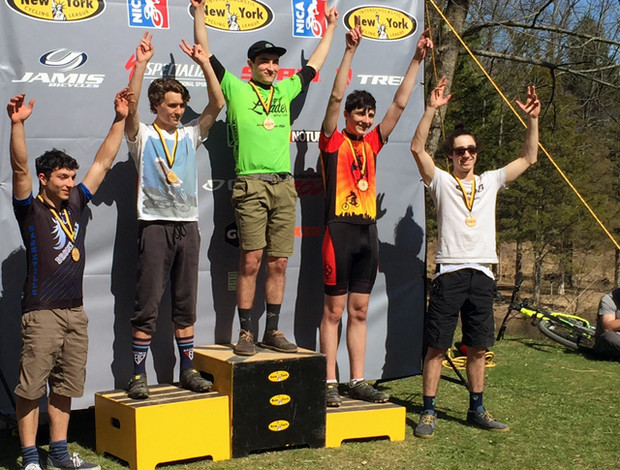 My first impression of the RKT was that it felt solid. From the get-go, I felt relatively comfortable on the bike. However, In my first half hour of riding, I realized this bike needed a shorter stem.

At 5’10”, the medium frame fit me perfectly, but my front wheel repeatedly plowed through the steeper, looser corners. I slapped on a 50mm stem, which slowed the steering down and made the handling more predictable while lifting some of the weight off the front wheel. I was also able to distribute my weight more easily for log hops and steep descents.

I think Niner has really hit the target with their RKT RDO; a solid and surprisingly capable XC race and endurance machine that inspires riders.

The bike shipped with a massive, yet welcome, 2.35” Maxxis Ikon tire in the front and a 2.2” in the back. 21 PSI was my sweet spot as far as tire pressure goes, and there was ample tire clearance front and rear.

I ran about 25% sag in the shock, and around 20% on the fork. The Niner feels very comfortable in flat corners, and can be pushed hard when things are relatively tame. 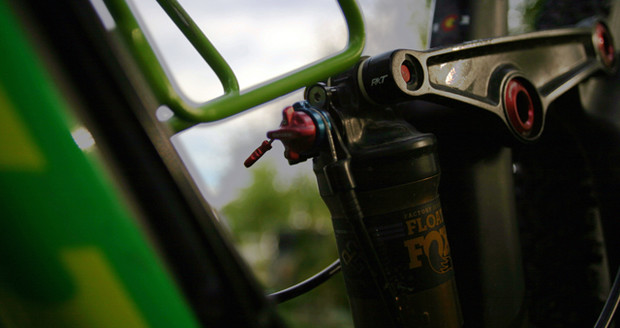 Line changes and sharp corners are welcome, as this bike is very agile and fleet-footed. The bike also has a very planted feel at speed, which allowed me to focus on racing while tired.

Although its numbers might suggest otherwise, the Niner felt supremely comfortable when things got rough and steep. I would describe the RKT’s CVA suspension as invisible.

I can see it just fine. GW photo.

However, the Niner’s suspension does not perfectly smooth out the trail, and I feel this is a good thing. This very slight lack of responsiveness maintains momentum and keeps the wheels rolling. It was working, and I could tell because of the extra traction on tap, but I found myself looking down a couple times to observe just how it responded to bumps.

There was quite a bit of climbing traction, as long as I was seated. The Niner’s 90mm of very progressive travel likes to stay near the top of its stroke, and doesn't have a very ‘plush’ feeling. However, this results in a very playful bike, encouraging me to pop off and over stuff, rather than head straight through it. This unsettled characteristic also means it is very hard to for me to get any sort of controlled compression in cornering. 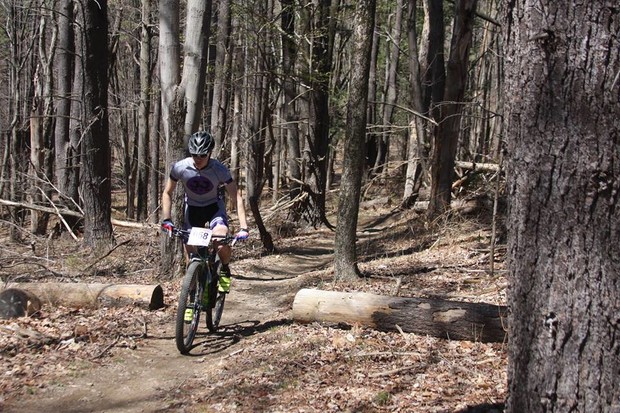 Lucas tuning it up. Photo by Lucas' mom.

During extended climbs, I used the remote to put the shock in trail mode quite frequently to quiet down pedal bob, as there was a surprising amount present for a cross country race bike. This bike climbed best while seated, and while sprinting, I used the climb setting.

Though the Shimano XT 2x11 drivetrain allows for crazy low gearing for scrambling up some really steep stuff, I would have preferred a one-by. I would also drop the Stan’s Notubes Arch wheelset for the lighter Crest wheelset of the same price and width.

I think Niner has really hit the target with their RKT RDO; a solid and surprisingly capable XC race and endurance machine that inspires riders to keep it on the gas while tired.