When not threatening the world with nuclear arms or attending basketball games with Dennis Rodman, Kim Jong Un has been busy mapping out plans for a new ski resort in North Korea.

According to the state-run Korean Central News Agency (KCNA), Kim Jong Un recently visited the site of the new Masik Pass Skiing Ground. “He learned about progress made in the construction of objects such as skiing gatepost, hotel, skiing apparatuses storehouse, heliport and cableway,” KCNA reported. Unfortunately, the KCNA not only failed to explain what a “skiing gatepost” is, it also failed to find a translator proficient in English. 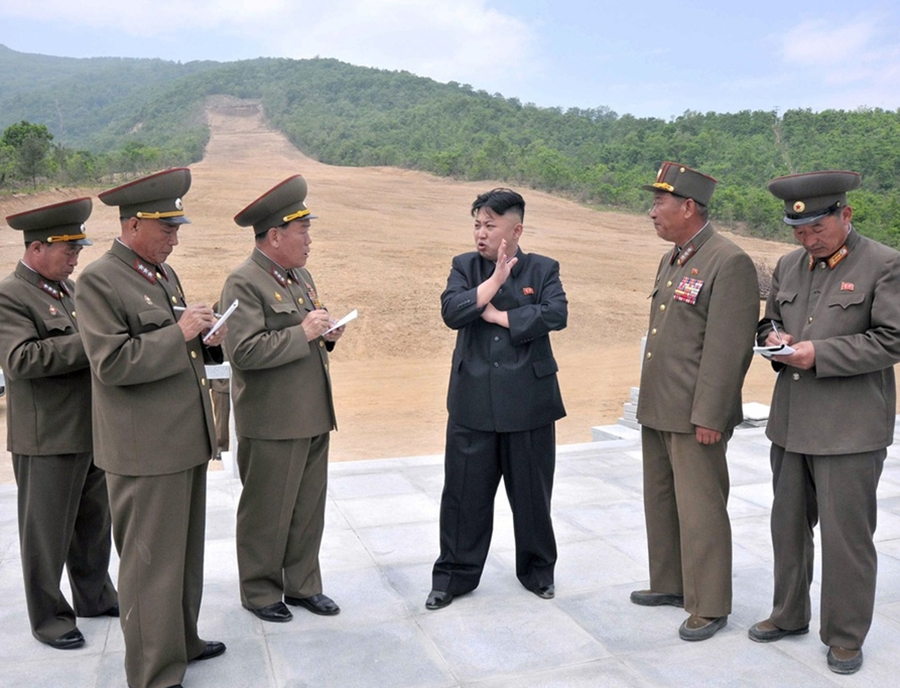 In addition to constructing the Masik Pass ski resort, the North Korean Army is reponsible for taking copius notes on its creation. Here, North Korean leader Kim Jong Un discusses the new resort, as well as his recent attempts to train for the 2014 slopestyle contest at Sochi. (Image courtesy of the Korean Central News Agency)

Fearless leader, who "has been doing triples since he was nine," has been working on a number of slopestyle tricks never seen outside of North Korea's borders. He won't comment on what he actually has up his 3/4-length sleeves, but he will say his "Quads are like woah," and his new move the "Fearless Unicorn," is going to send skiing into the nuclear age. We're excited to see the sparks fly.

With North Korea's new training center, we're expecting to see pint-sized power players in the ski game come piling out of Pyongyang. "We've learned from Mr. Shaun White that the only way to become the best is with private training facilities," says Fearless leader. "We also know we shouldn't pay any attention to the sports we're participating in, just like Mr. White. We're good at that. We've got decades of isolation expeience here in North Korea."

As for the current crop of American, Canadian, and Scandanavian talent ruling the ski industry? "None of those chumps was ever born under a double rainbow," says Beloved Leader.

The new “skiing ground” at Masik Pass seems to be an improvement from the skiing North Korea currently offers at Mt. Baeku:

To learn more about the Masik Pass Skiing Ground and North Korea’s attempts to transform skiing by dropping new technology, follow the jump to CNN.

If, however, you’d prefer to wade through the poor translations available from the North Korean government, drop into the KCNA's site for coverage of Kim Jung Un's visit to Masik Pass and other happenings in the DPRK.