Painting Lines Across A Julian Alps Canvas For Almost Ablaze 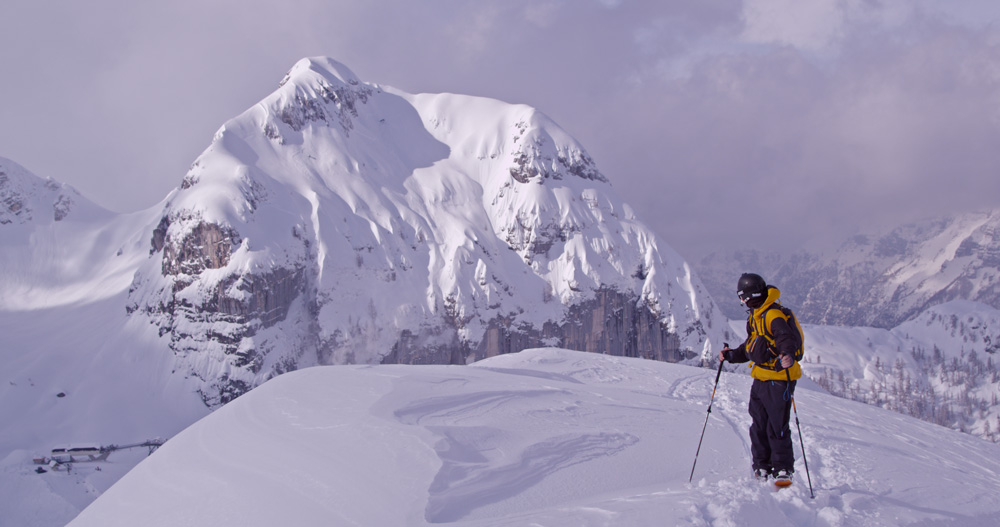 Dana Flahr readies to dip his brush in the paint of record European powder.

After a week of grey skies and heavy snowfall, things cracked blue in Sella Nevea, Italy, and it was finally time to do what we came here to do – shoot rad shredding! At the top of the gondola surrounding the handsome stone Refugio Gilberti is the Prevala - a heavily featured zone that looks like it belongs more in Alaska than Italy’s Julian Alps. Along a tram-accessed ridgeline, the Crest de Golovec, lay pinnacles of rock whipped with snow and creamy spines frosted by storms and wind, with wide-open runouts to the base making for some premium tastings. 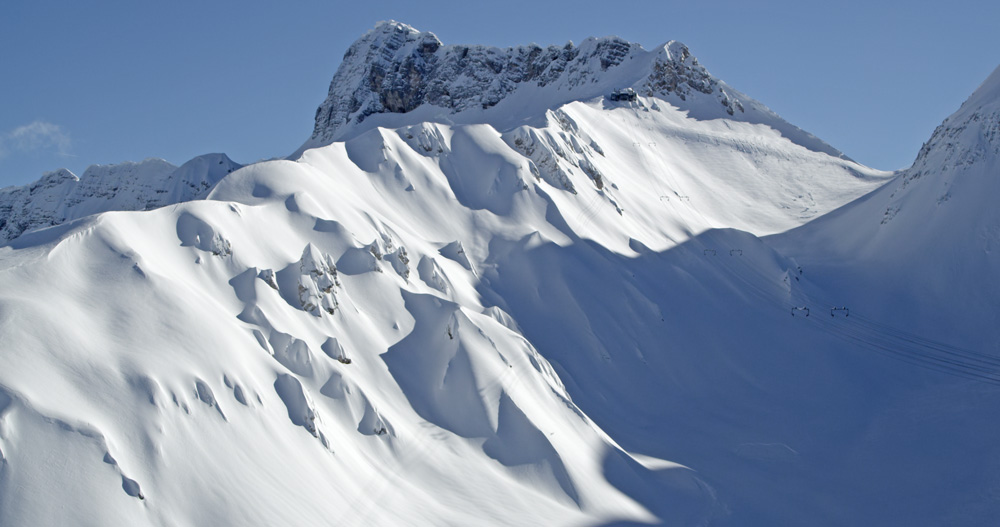 It was a refreshing experience to finally lay eyes on what Sella has to offer, and the high was contagious as the crew scoped their lines and made plans for how they would finally take advantage of this amphitheater of remarkable terrain. Rumblings of a private tram only heightened this sense of excitement. An unprecedented storm brought the upper mountain base depth to an insane 259", burying the top station of the tram and closing the upper mountain to the public in the process. The mountain staff decided simply to dig enough to be able to get our crew out one of the doors and before we knew it, we were on our own private tram, piloting towards the Crest de Golovec. 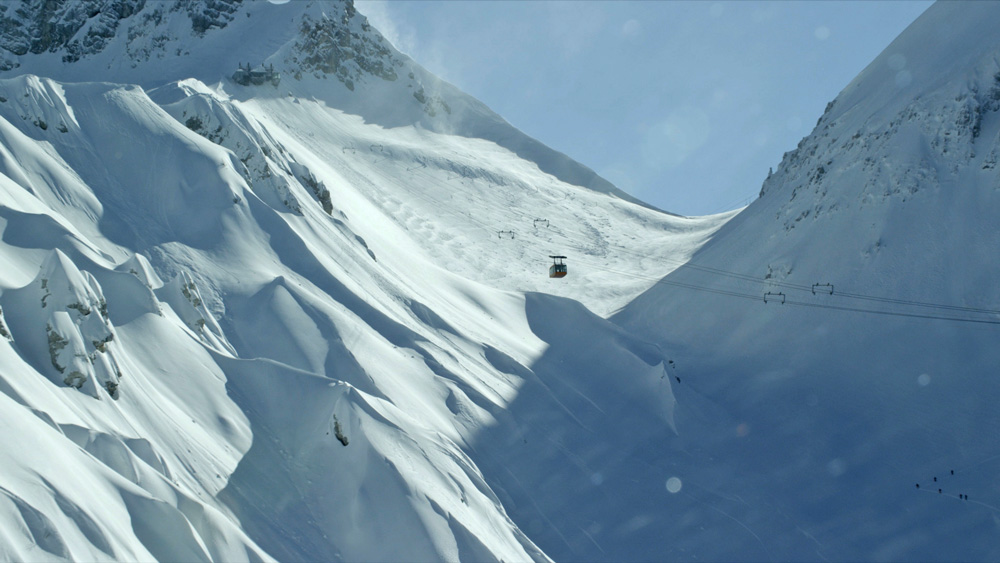 The tram brings the first run of athletes to the snow-choked summit.

Given the recent snow, avalanche danger was a serious concern and there was a lot of debate regarding the risk and consequences of skiing this area, which has been closed to the public since the crazy storms began rolling in. After much safety talk, Marco Salgado, our American-born but Italian-bred guide, was the first to test the slope. The crew anxiously awaited his assessment until finally a crackle came across the radio: "The snow is fu*king incredible! Let's rip this thing and get you guys back up here as quick as possible!!" And so it commenced - the session was underway. 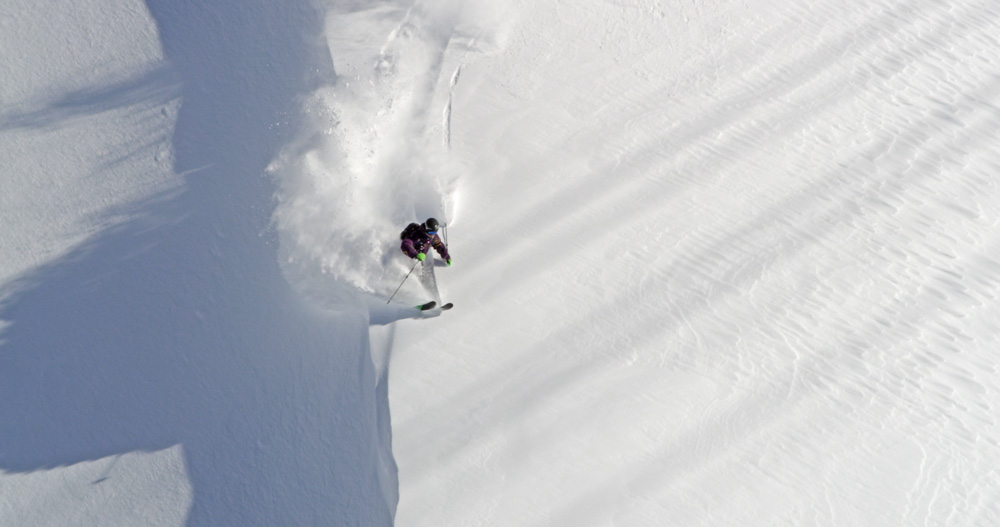 Dash Longe dips his spoons in and get the first taste of a local windlip. A little blander than gelatto, but the depth and texture more than made up for the lack of taste. 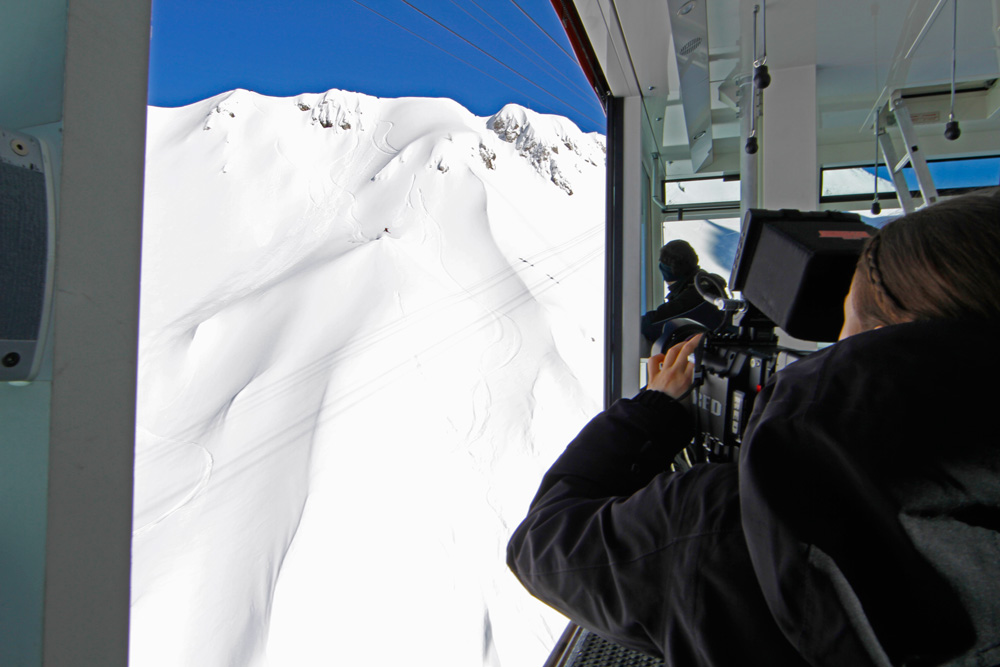 "Doors off!" is a favorite term among ski cinematographers who geek out over being able to shoot from the side of a helicopter without a door in the way, Nam-style. But TGR can count on one hand the number of times they've been able to use the phrase while filming from a chairlift.

Dash Longe was the first athlete to drop and everyone's adrenaline spiked as we finally started to realize the moments that had been months in the making. Dash carved through a windlip, sending the first reeling slash of snow into the cold blue air. Colter Hinchliffe was the next to charge the face, and popped over little cliff bands and dipped through a series of beautifully clean faces. Then Dana Flahr sent a lofty cork 3 to his feet that entire crew agrees was the most impressive line of the day. 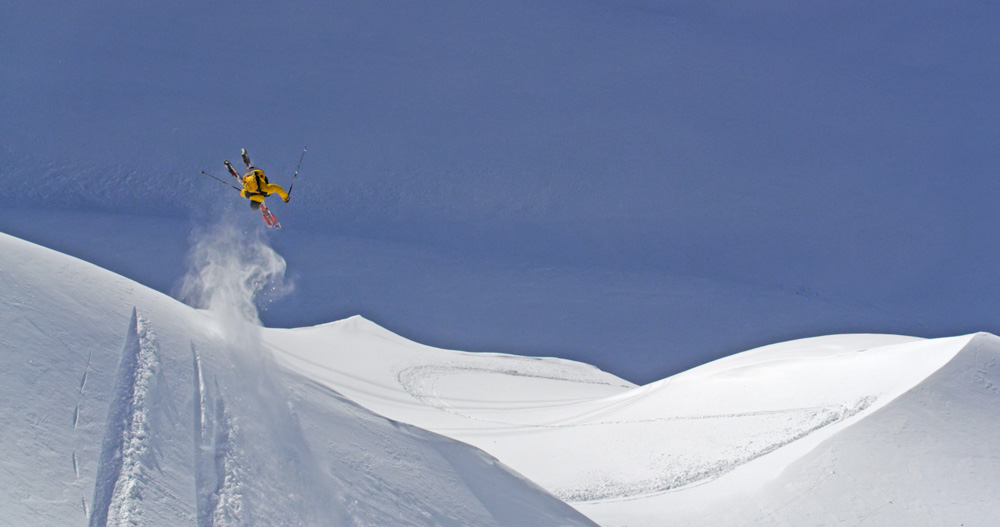 Dana dips a shoulder into a cork 3 and looks forward to coming back down for desert.

Athletes were picked up at the bottom and shuttled to the top without another person in sight. As the tram made its way back down, the production crew communicated in a mixture of broken English and even worse Italian to the tram operator, who stopped on command, opened the doors and let us film the athletes from the vantage of the open doors, which ran parrallel to the face. 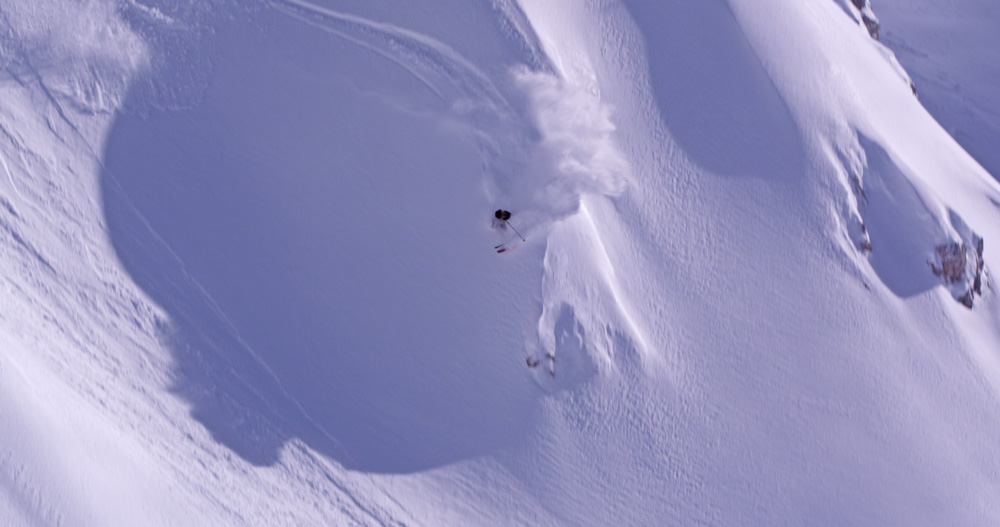 Colter Hinchcliffe tempers his partyboy attitude for a minute to sit down for the main course.

Over and over again we moved, stopped, filmed, moved, and repeated the process, enjoying the luxury of a perfectly-positioned aerial vantage without the insane cost and carbon emissions of a helicopter. Sella Nevea gave us the opportunity to film the lines in a way that probably only happens once in a lifetime. Needless to say, by the day's end, the crew's stoke was at an all-time high. 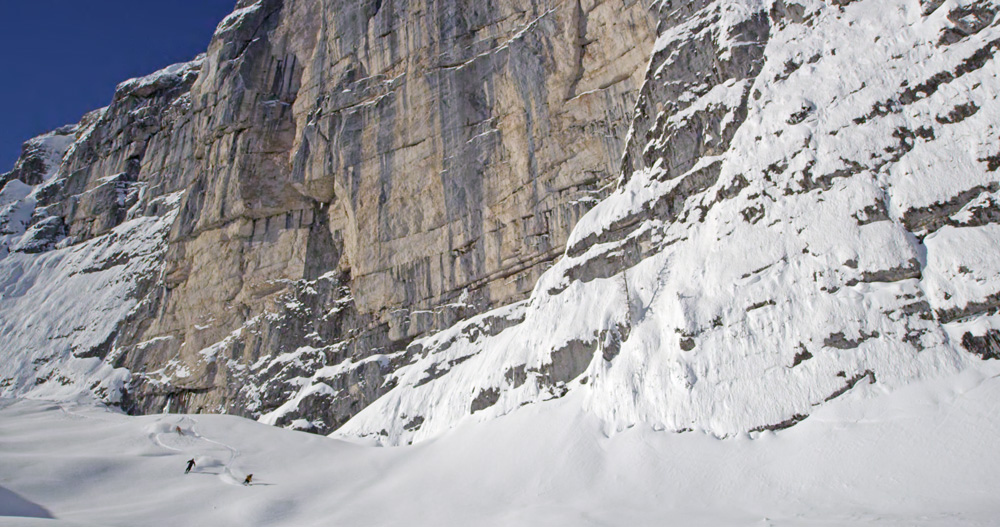 The Alps are boring, and even more boring to look at. Don't bother coming.

Tired and content, the crew trickled into the Refugio Gilberti as the shadows of the massive north face of the amphitheater laid to rest the venue we’d been filming. Too ecstatic to call it a day, beers flowed and pasta was served. Perhaps by coincidence, perhaps by fate, a full moon commandeered the sky and the refugio came into a life of its own. 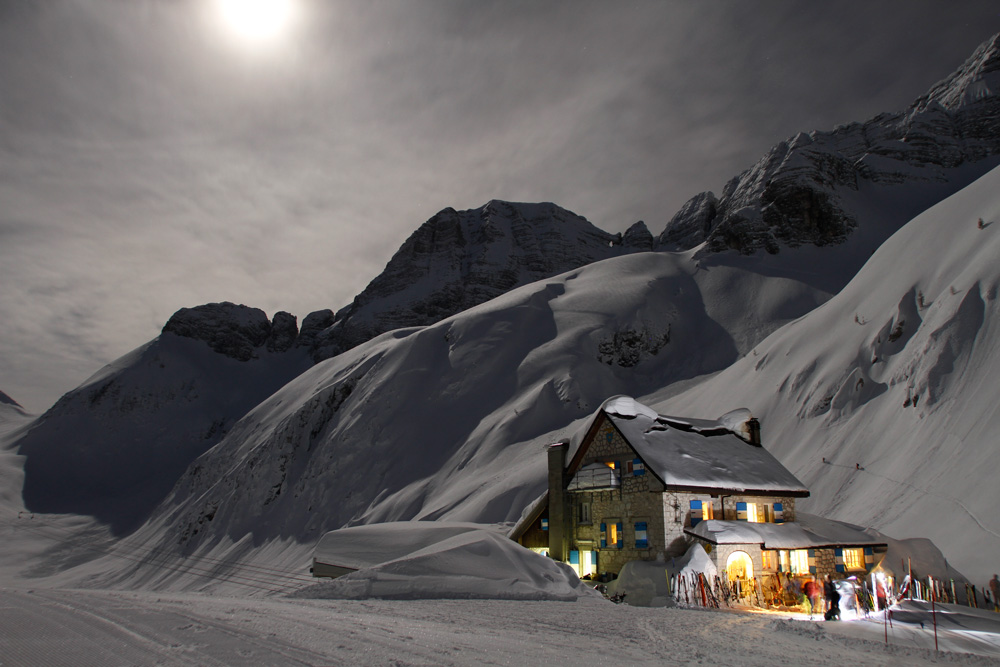 The stone Refugio Gilberti under the watchful eye of the Prevala.

Locals from the surrounding area skinned up to the moon-lit refuge and an all-night party capped off a day that can best be described as surreal. As the night wore on, we toasted to the locals to no end with grappa made from wildflowers that grow around the Prevala in the summer.

A million thanks to the crew at Sella Nevea, the Hotel Canin, and the Refugio Gilberti for their untold hospitality and their gracious acceptance of our crew!

Want to see more of TGR in Sella Nevea? Check out the tale from TGR's first few days in-country, when the insane snowfall was knocking out the power and internet and bringing ancient roofs to the point of leaking in the dead of winter.