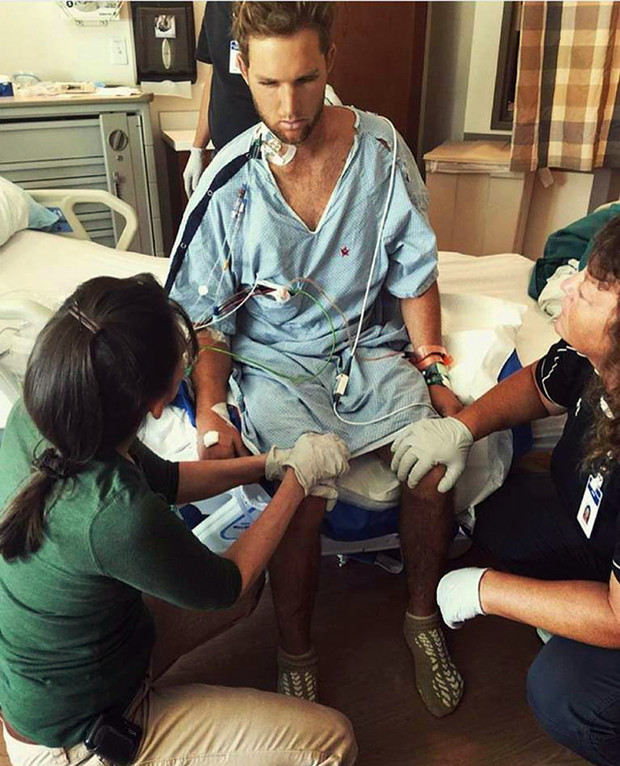 First things first – here’s how to support to Paul Basagoitia.

If you're in a position to be able to help at this point in your life, take a minute to do so before reading further (Road2Recovery is dedicated to providing financial assistance to AMA licensed professional Motocross/Supercross riders and Action Sports professionals in the event they sustain career ending injuries.).

There’s been a fair amount of soul searching in the last 48 hours over Paul Basagoitia’s injury. Responsibility has been thrown at RedBull, Rampage, the riders themselves, organized sports and even pointed back at media for covering and elevating events like Rampage. Certainly it's a confluence of all those things. It’s complicated. I don’t feel like an exceptional hypocrite because I like, and write about, mountain biking. And Rampage started as grass-roots event and then ballooned past that (to the organizer's credit, the event was shut down for 3 years after 2004 because riders were taking too many chances), the riders came of their own free will and, in sports, sometimes people get hurt. I'm not saying everybody gets off the hook, I'm saying nobody gets off the hook.

In my opinion, NFL Football sets the gross hypocrisy standard in the US and, against that, our angst over Rampage may not register very large. But if you look at college football or basketball you get a clear indicator how, when big dollars are at stake, people can get taken advantage of. I will say Nicholi Rogatkin’s crash put the tone of this year's Rampage clearly on display. Though, if that hadn’t happened, we might have just written off Paul’s injury as an outlier occurrence. When you get a wakeup call that loud, and still oversleep, it’s time to ask questions.

Let's unpack what happened just after Nicholi’s fall; There was an immediate response by EMTs - that’s good. But then two event people, one man and one woman, looking untrained for handling this contingency and fully clad in “Rampage 10” gear, one of whom couldn’t be bothered to put down his can, showed up as well. They ran around looking like, ‘what do we do now?’. Cut to the next shot in the video; the same woman with the Rampage hat, shirt, bandanna etc. gives Nicholi a go with several hooting cameraman RIGHT IN HIS FACE egging him on. And off went the concussed rider to hit a 70-foot gap jump. THAT was irresponsible - and a clear indicator rider safety was not paramount at this event. I don't want to hang those two folks out to dry, it was confusing - I'm sure they had 100 people in their ear on a walkie talkie shouting 100 different things. Regardless, from rider perception, this environment must not have been one where their well-being was of primary concern.

Then, the next day, Paul Bas, operating in this context of everything goes - the bigger the better - gets critically injured (not to mention many others at pre-ride and during the event). Sure, he wasn't hurt to start his run, he had qualified and was a long time veteran, so nobody is to blame for letting him start. But for sure he felt the heat to go big, or bigger. (though, good having a helicopter standing by).

Some folks are calling for the riders to be paid more as a solution. I'm not sure that would solve this or make it ok. Of course I wouldn’t be opposed to these guys living more comfortably, or profit-sharing in the event (heck, maybe a collective of riders should share in producing the event - or, this is exactly why unions get started), but creating stronger incentives to accept danger is not the answer, in fact it’s probably the opposite of the answer. Money has nothing to do with the main issue.

Cam Zink, in a well-worded barb on his Facebook page in support of Lacy Kemp's fine article writes "When the riders stick together it is usually because most think they will be banished for speaking up. When we promote change it is scrutinized as "biting the hand that feeds," revolting" or just "causing problems." We have been threatened with loss of sponsors, not being invited back and lawsuits for defending our best interests and sticking up for what is right, rather than just listening to us.

Our diplomacy is no longer falling on deaf ears and change is on the way."

Angry Single Speeder also made a good point about riders being caught between having to go big at this spectacle in order to make a name for themselves, or making the safe choice and remaining anonymous and un-sponsorable. And this is where the confluence of media, event, rider and sponsor come into play. This game is about huge page-views, visibility and the amount of times content with logos is shared. Podium shots don’t mean what they do in road racing. It's about huge moments that shock and surprise, shared a million times over.

Let’s be honest, Rampage is not a race or even a real competition. It’s a spectacle, a way to get awesome footage. A marketing event. It’s un-judge-able. There’s no way judges can possibly parse any ride by watching varying edits shot at different camera angles by a live production team and comprised of different tricks of varying difficulty performed on different man-made and natural features. Even in competitions where athletes perform the same tricks on the same surfaces (like, say, figure skating or bull riding), judging is largely garbage. So let’s call Rampage an event. That doesn’t detract from the skill, the danger or the difficulty of it but, in that light, does it really matter if these incredible moments are generated under the pressure of an event? But America loves a winner, so who knows how that will shake out.

I certainly don’t blame the event for being a success or existing. I’d love to create an event that got hugely popular and was watched by millions. And managing growth is hard. For anyone. Especially in a context where the strongest driver of growth is the incentive to go even more crazy with risk each year. Redbull seems to have been good at managing growth in the past, and will probably put good brains on this. I know they don't actually want folks to get hurt. For a fact. In my experience, they are great people. They walk a tough line between celebrating the extreme lifestyle we enjoy and enabling it.

Many have called for the event to at LEAST cover the riders' insurance costs. I’ve never heard of a race or an event covering insurance, I’ve entered ones that have mandated having it, with links to where I could get good event insurance. But hey, if RedBull wants to take the next step and actually cover it (including long-term costs for the contingency of permanent disability), I think that’s a fine idea. In fact, shouldering that liability might incentivize them to lay a few safety ground-rules. I’ve got a feeling it’s going to be hard to find an underwriter to take that on, though.

Or, riders could look at the example of PBR. In 1992, in a hotel room in Prescott, AZ a handful of disgruntled cowboys formed their own league because they felt the safety and financial needs of bull riders weren't being met by the PRCA (Pro Rodeo Cowboys Association). They each put in $1000 dollars and, since then, their discipline has ballooned and was recently sold to WME/IMG for $120 million (there are strong parallels between MTB freeriding, relative to other MTB disciplines and bullriding, relative to other rodeo disciplines). CBS is carrying the finals this week with 17 hours of programming.

Anyway, back to the point and the human being that started this discussion. I wish I had more concrete information on Paul's ability to move his legs. I have a photo of him sitting with physical therapists surrounding him. I'm hoping they are there for a reason, and that reason is there's hope for him moving, walking and, if he so chooses, riding again. Like you, I'm glued to social media with fingers crossed for any hint of good news.