The Volkl New Zealand Freeski Open kicked off Thursday with a stellar field of international riders vying for a spot in Friday’s slopestyle semi-finals and finals at Cardrona Alpine Resort.

The top qualifiers were successfully combining the two tricks in a single run, a progression that only began to emerge toward the end of the 2010 Northern Hemisphere season.

Christopher Laker (US), Vincent Gagnier (CAN) and Charles Gagnier (CAN) were the top three qualifiers to advance to tomorrow’s semifinals.

“If the Gagnier brothers have to go through qualifying, that tells you how strong the field is this year,” said Chief of Competition, Nick Draxl.

The Gagnier’s will be chasing defending champion and X-Games Gold Medallist Bobby Brown, as well as Wanaka’s Byron Wells and Australia’s Russ Henshaw, among other top riders who were pre-qualified and will likely feature in both the semi-finals and finals.

“The park at Cardrona is in great shape, and we had excellent weather this morning,” added Draxl. “Everyone is looking forward to an epic day tomorrow.”

Here are the top 12 qualifiers for Mens Slopestyle, their country and their overall score: 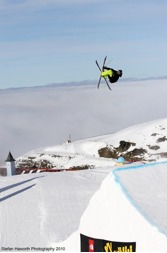