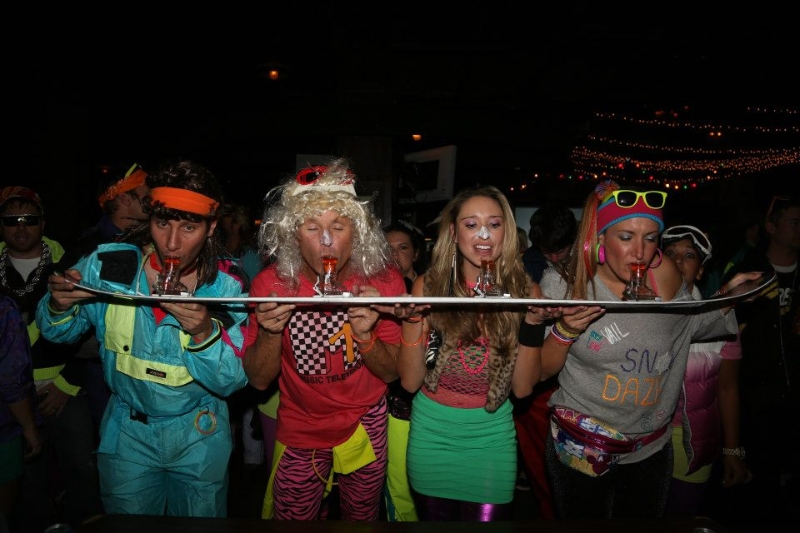 When thinking of a lucrative business, designing shot skis wasn’t first on our list, but Scott Evans over at Shotz Ski has tapped into a little niche in a big industry. Shotz Ski has a variety of setups to get you and your friends in the après ski mood with circle, square and double diamond-shot options. In the words of the Evil Elf himself, “It’s pretty doggone fun!” Check out his fantastic answers to some hard hitting questions below, and get yourself your own Shotz Ski kit in the TGR store.

Where did you get the idea to start a company that makes shot skis?

I was just messing around a little bit. I had a friend of mine that came up with something with some boots that were made out of glass so I took that and modified it. Everybody was always complaining that you couldn’t wash the shot glasses on a ski so we came up with something that was kind of cool that was actually was a ski boot and then went to releasable bindings and kept fine tuning the bindings making them cool and affordable.

The product is recyclable and made in the United States. Is being green and local part of your mission?

Part of the idea behind the shot ski is making sure you’re not taking your skis to a landfill or having them tossed to waste. So that’s pretty cool. I like getting old skis and getting them back in service. A lot of old people think about their skis and the really good memories with them. 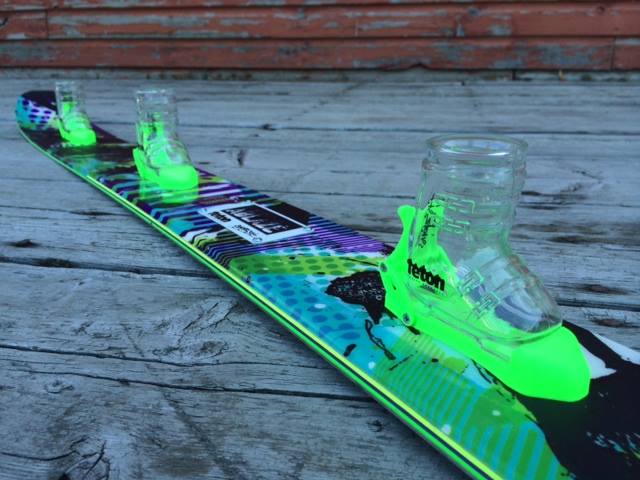 Shotz Ski, like this custom one for the TGR world movie tour, are made right here in the USA.

So the Roadie Shotz Ski–can you tell me more about that?

That’s something that we’ve actually been testing. We do a lot of testing in the company, so it’s pretty stressful and drives up our booze bill too quite a bit [laughs]. I finally came up with a combination that I really liked, and I just put it up for sale on the website a week ago. 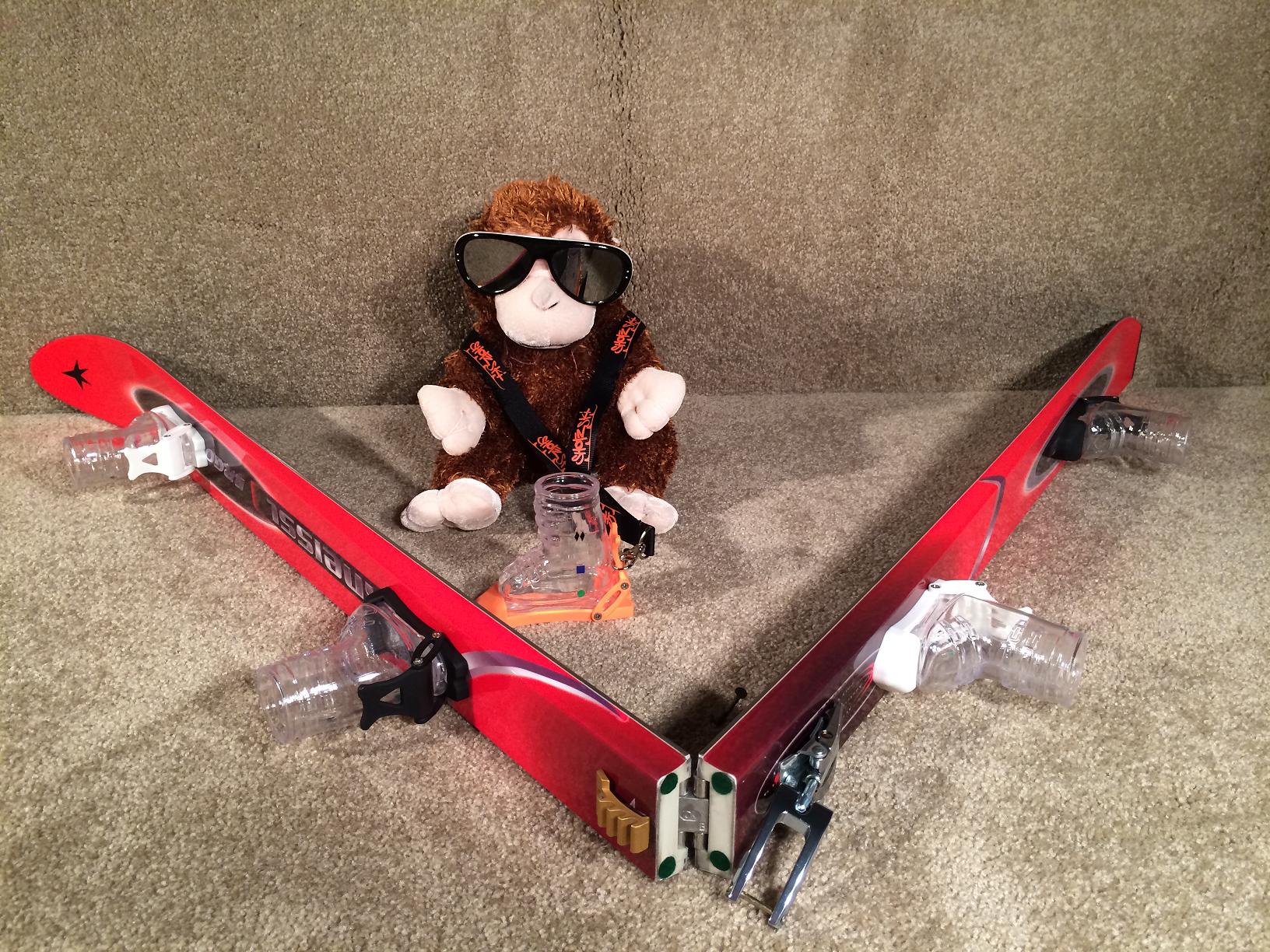 The Roadie Shotz Ski splits in two, and is the ultimate accessory for the road trip-loving alcoholic skier in your family!

We’ve had a lot of people cruising around, road-tripping or jumping in the rig, and quite honestly, if you have a 215cm straight ski with shots mounted to it, it’s kind of a pain in the ass to haul around. So I developed this one which is setup on a hinge system, and allows you to fold that puppy in half. It’s kind of neat because you can fold it up, stick it on your backpack and roll.

What are some of your long-term goals for Shotz Ski?

Fucking world domination, what else? I think it's fun. One form or other of the shot skis has been around for decades. I mean ever since I was way little, in the '60s and '70s, they've been around, and I just always have thought they’re cool as hell.

I like getting a really cool product out there that’s affordable and it gets people to take those old skis out of the barn or out of the back room that have been sitting around or are really special to them, and put them back to use. It’s amazing, I just love when I hear the stories of people and they tell me about the skis they put their bindings on, tell me about the parties that they take it to. It’s part of the ski culture and I like complimenting that a little bit—my little donation to ski culture. 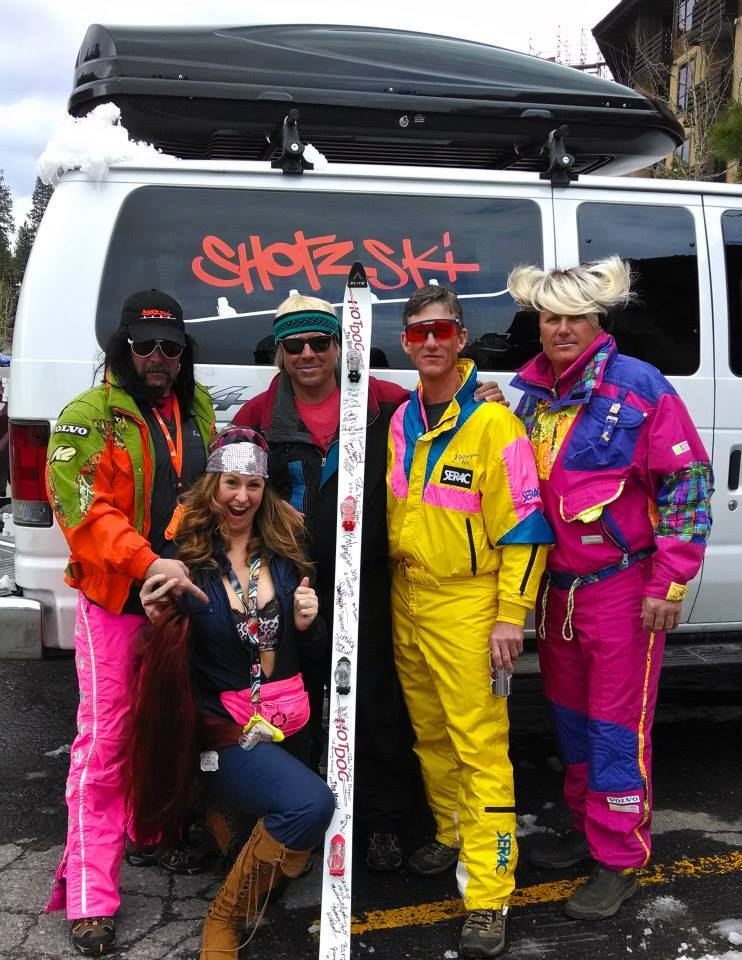 Shotz Ski's elite team holds it down at Squaw Valley.

Another new project for Shotz Ski is the creation of a “Pro Team” of elite Shotz Ski Team members. To make the team you need to excel in several areas. First you need to love skiing (or boarding), second you need to love apés with friends after shredding! Third you must always look out for your buddies on the mountain and off. You need to be a true pro and go big, and still be safe.

And finally, you need to love having fun and spreading the Shotz Ski word! The team categories are being worked up but will include all types, from the raddest, the rowdiest, the gapers, the snow bunnies (snow goddesses) and the Evil Elf wannabes; not to mention the Shotz Ski pros!

Is there anything else you would like to add?

Being made in the U.S.A. and making a good quality is super important to us. We’re kind of a fun product, but we’re really tuned in to customer service and taking good care of folks who support us.

I guess the other thing is go out ski hard, party hard, but be smart about things and take care of your friends. Have fun, but be careful. It's never worth ruining your powder day the next day.

To get setup with your own shotzski contact the Evil Elf here. TGR-branded DIY Shotz Ski kits are available right in our own store, and many signature TGR Shotz Skis are being given away on our TGR movie tours right no!