After the first serious blizzard to hit Missoula, Montana in many years brought heavy snowfall and high winds to the relatively dry Northern Rockies college town that rarely sees big snow in the winter, a snowboarder set off a slab avalanche on Friday afternoon on a 36-40 degree slope above a residential neighborhood that destroyed two homes and left three residents buried among the rubble of their home. The victims included retired biology professor Fred Allendorf, 66, whose condition in a local hospital was recently elevated from critical to serious, while his wife, Michel Jo Colville, 68, remained in critical condition. An 8-year-old son, Phoenix Scoles, was found pinned against a fence an hour after the incident and is in fair condition and expected to recover. 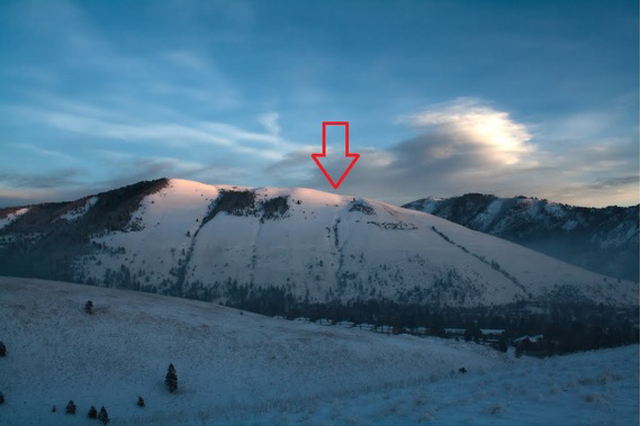 The pitch off of Mount Jumbo that slid on Friday. Photo by Erik Samsoe.

The slope that slide, a west-facing bald pitch of 36-40 degrees off of Mount Jumbo, is rarely covered by more than a few inches to a foot of snow according to local TGR forum members, who say that's owing both to the area's typically dry conditions and Mount Jumbo's low elevation, topping out at only 4300 feet. The slope, which drains into the 100-year old Lower Rattlesnake neighboorhood, is closed during the winter to protect habitat for wintering elk.

The lead-up to the incident produced a rare set of avalanche-prone conditions in a part of Montana that rarely receives more than 13 inches of moisture per year. On Tuesday and Wednesday, clear skies and temps in the 40's created a sun crust, which didn't bond well with the new snow that came when temps dived and Missoula began enduring a historic blizzard later in the week. The avalanche advisory for Friday from the West Central Montana Avalanche Center, which rated the avalanche danger as "HIGH" on any slope steeper than 30 degrees, read as follows:

“The primary avalanche problem today is new storm snow slab development on the sun crust or rain crusts on slopes steeper than 35 degrees. East to southwest aspects are suspect but it should be pretty easy to stick your arm down into the snow to see if the crust is present.

Another avalanche problem to be aware of is wind slab development. Mountain winds have been mostly calm through this morning but the weather models say this is about to change, with a vengeance. Arctic air is spilling over the divide this morning with increasing winds from the east. This scenario loads unusual places so it will be possible to find wind slab and cornice development opposite from the expected places.” 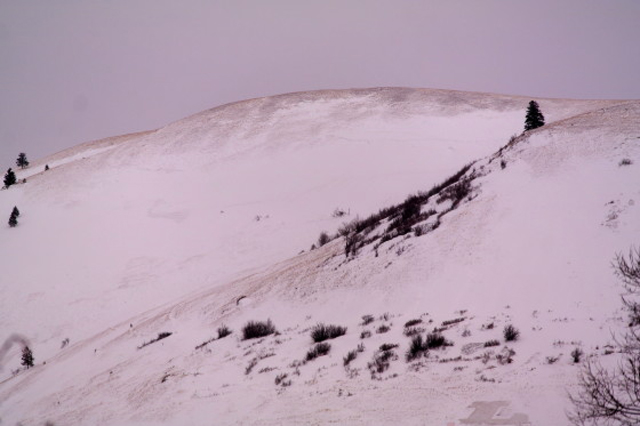 The start zone of the February 28th slide off of Mount Jumbo. Luke Laird photo via the West Central Montana Avalanche Center.

The unusually high winds and heavy snow loaded the slope below Mount Jumbo with a 2-3 foot deep soft slab that bonded poorly with the crust below. The snowboarder alledgely was riding the pitch that drains directly towards the intersection of Holly and Harrison streets when the slab released, carrying him some distance before he was able to get off the avalanche. By the time the debris hit the home of Colville and Allendorf, it was going a reported 120 miles an hour, which knocked the home clean off its foundation and pushed it 50 feet into the intersection of Holly and Harrison. Allendorf was pinned under the rubble of his brick chimney, and Colville was recovered three hours after the avalanche occured surrounded by remnants of the house. Both survived entirely thanks to the air pockets that the debris of their house formed. Scoles, the young boy, was found pinned against a fence an hour after the avalanche.

The response to the incident was immediate, with dozens of residents pouring out of their homes to scour the debris for victims, and local search and rescue crews responding with 50 personnel.

According to an article by the local paper, The Missoulan, avalanche victim Michel Colville, 68, succumbed to the injuries she sustained during the avalanche and died in the hospital last night. Like her husband Fred Allendorf, who remains in serious condition, Colville was pinned under the rubble of her destroyed home, and was found some three hours after the avalanche slid from the face of Mount Jumbo. According to the Missoula police, no criminal charges are pending surrounding the incident. Police have also apparently asked others below Mount Jumbo and in other newly avalanche-prone terrain to vacate their homes.