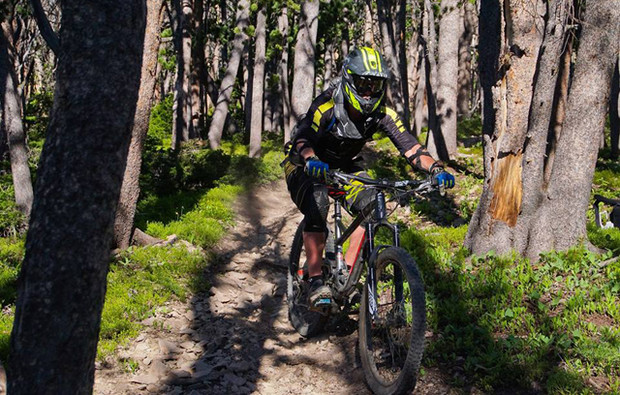 If it’s comfortable you’ll wear it. If you wear it, it’ll help you. Before we get into the (many) technological safety features of the DBX 5.0 helmet and 6.5 neck brace, suffice it to say both allow great freedom of movement and adjustability. It's nice to know protective gear manufacturers like Leatt have been innovating in comfort, as well as safety.

Perhaps one of the best compliments I can pay, without having to say they kept me from being injured, is that I don't really notice I'm wearing either one of them. They practically disappear, and don't affect my riding at all. 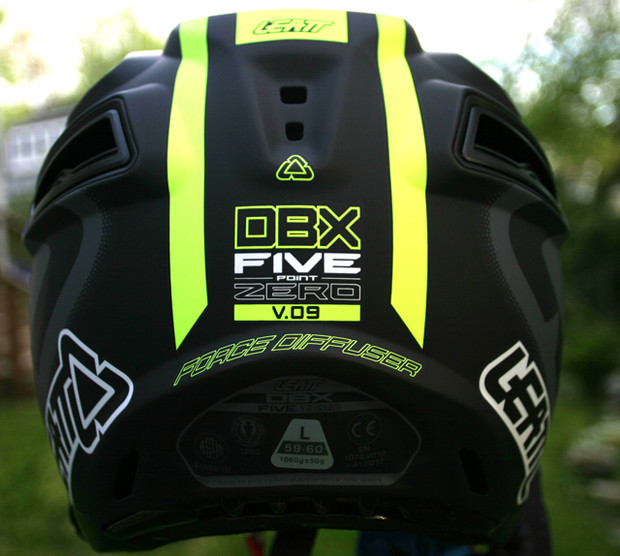 Just in case you need something to read, most of the product information is printed on the helmet. GW Photo

The claim on Leatt's website is that the in-molded V foam and 360° Turbine technology help reduce low-energy impacts, while simultaneously reducing rotational acceleration to the head and brain, by up to 40%. That is compared to a ‘normal’ helmet without those types of features—regardless, it feels very safe and if there's one company that publishes reams of data on how they test stuff, it's Leatt. Here's their ASTM Research Testing, CPSC Test for Bicycle Helmets and EN-1078 Certification Testing. Illustrations of the technology are below.

Nice little vid to help visualize some of the DBX safety features.

One of the more interesting claims is that a shell size reduced by 10% cuts down on (or transfers fewer) rotational forces to the head and brain by 20%. I guess that makes sense; a like force applied around the outside of a larger circumference will create more centrifugal/inertial force upon the brain than if applied around a smaller circumference (video above illustrates this at about 1:40). Though it took a few times back and forth with Leatt's rep before I could visualize this for myself.

It is pretty svelte. And the visor looks like a duck. Note the breakaway visor bolts. GW photo

The two technologies at work to help with both slow speed and rotational impacts are the 360 turbine rubber disks, which act to both cushion impacts and dynamically slow rotation, and also the V-foam, which is a dual density foam between the shell and head in-molded with a zig-zag topography that will help disperse direct energy and dynamically slow a torsional impact. 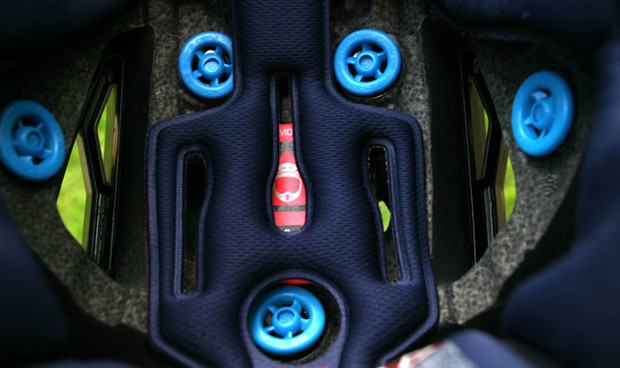 Remember, the trick to helmet safety is elongating the deceleration time a brain, in motion, needs to stop moving as a result of an impact. For mitigating rotational forces and torque on the head, many companies develop their own, or use licensed, technologies like MIPS. 360 turbine—as well as the above-mentioned smaller shell size—is Leatt's version.

Light is good if you're feeling heavy. Dave Peters photo

For me, the Leatt DBX 5.0 was incredibly comfortable. I own a Troy Lee D3 helmet, which I don’t mind wearing, but it’s not as immediately plush-feeling as the Leatt. Though maybe that’s the shape of my head. Also, there’s definitely great cooling from the very large vents.

The visor attaches via bolts that use a breakaway technology (the screws pull out on impact) to ensure it doesn’t catch on something during a fall and snap your head around. That's not unique to Leatt, but good to know it's there. I feel like half the benefit of safety features is how they allow you to not worry about your health and focus while riding.

The helmet feels very well ventilated and cool, thanks to its massive rear vents. Not only does the airflow feel nice, but it'll encourage keeping it strapped on your head. Sometimes when it's hot folks tend to pull their helmet up during stops and then down to ride, forgetting the chinstrap. 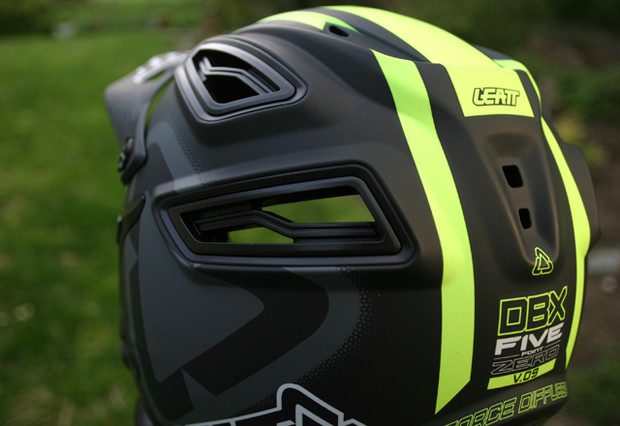 And it looks amazing. Not that looks matter much when buying a helmet. But there’s definitely a difference between Troy Lee graphics and Leatt graphics—no eyeballs, feathers, snakes or flying splashes of whatever. The Leatt DBX is slick and tech-y looking. I like it. The duck-like visor is kinda neat too. 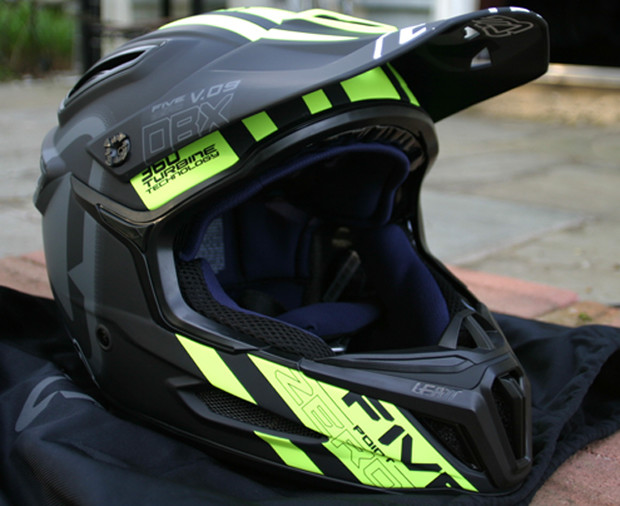 Pulling it out of the bag for the first time is a bit of a religious experience. GW Photo 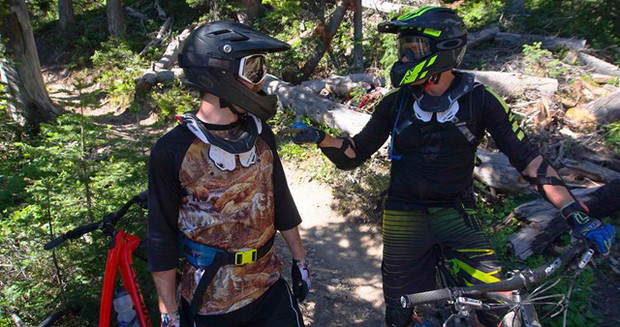 Is that a neck brace, or are you just happy to see me? Branham Snyder photo

-Lightweight, 600g. Very rigid, without flex
-Designed for a "biomedical" freedom of motion.
-Sliding front and rear SureFit adjusters for 3-way adjustability and optimum fit
-Rear thoracic strut adjustment shim to fit most body shapes
-Sculptured, split front for improved comfort and fit
-Thoracic rear strut is engineered to snap off before applying excessive pressure to the back 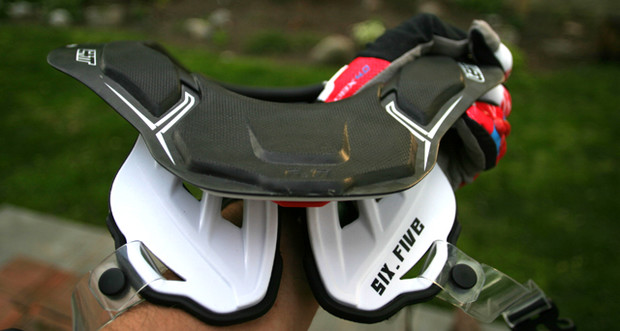 Front view. It has slim bumpers on top of the carbon. Fit and finish are great, nothing is rattle-y. Note the clear retention straps. GW photo

Though the 6.5 is pricey, Leatt makes neck braces down to $299 for which you’ll sacrifice no safety. The 6.5 just represents their pinnacle of light weight, ease of adjustment and mobility.

Their neck braces will work as well with all, or possibly most, brands of helmets. If you already have a full-face you don’t have to buy another one to use the neck brace. They are all designed to work together.

The forward fit lever. Pull it down, slide to fit, snap it back up. GW Photo

Ok, let’s get this out of the way. A neck brace is about trying to prevent you from being paralyzed. Forever. I’ve broken lots of bones and torn a lot of ligaments and bruised ribs more times than I can count riding MTB. And I’m fine. You break your neck (injuring spinal cord between C1 and C7) once, once, and you’re done. That’s what you weigh with your decision to buy one. Could you ride your whole life and not come close to needing one? Most probably. Do you need one for your average trail ride. Probably not.

But, if you’re going to be riding on the edge, on hairy terrain, consider it seriously. Because that’s the context for this product. That’s what we’re talking about when we’re talking about the product’s ‘features’. I guarantee $300-$500 feels like peanuts in hindsight from a hospital ward. Ok, dad-talk over. 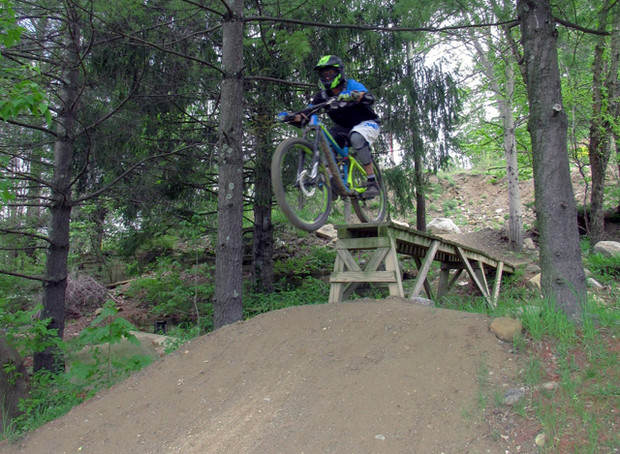 If your friend jumped off the Brooklyn... oh, never mind. Dave Peters Photo

What makes neck braces work is how they direct crash forces from your helmet to your body, bypassing the neck. These forces can be oblique, or sideways/twisting, or direct. Leatt calls this engineering Alternative Load Path Technology - ALPT®.

A rigid construction is key for this energy transfer. A neck brace is not supposed to be soft, it’s supposed to be hard enough to transfer forces away from your neck and distribute those onto your torso and the piece itself. Multiple engineered fracture points and crumple zones on the unit will bend or break away at pre-determined stress levels. The thoracic rear strut is engineered to snap off before applying excessive pressure to the back 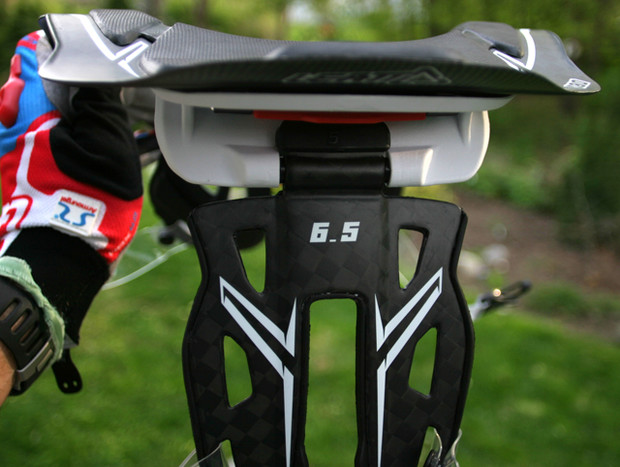 Rear view. Back of the brace and the rear strut. GW Photo

Interestingly, Leatt's communication manager mentioned that even though forces are transferred to the torso during a serious impact, it's a misconception that neck braces break collarbones. Supposedly collarbones break in crashes more from folks landing on their shoulders or putting their arms out to brace themselves.

Regardless, Leatt’s user manual is very clear about how it’s supposed to fit. Fitting the brace to the body is critical for the engineering to work. And you can get it dialed in quickly. But if you’re out on the lifts and need to make a quick tweak, that takes 10 seconds and is quite intuitive. 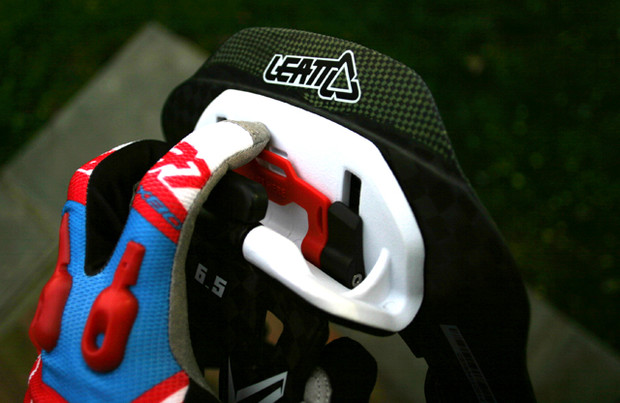 The rear fit lever, and below that is the thoracic strut shim. All pretty simple to operate with one hand. GW photo.

Three quick snap and slide “SureFit” adjusters allow the brace to rest on your torso properly without tools. There’s also a small rubber rear thoracic strut shim that allows the strut to be adjusted to multiple angles—based on your own back shape.

Side view. If these red tabs are centered on your trapezius, you've got it fit right. GW Photo

Something you might not even notice, or regard when opening the box, are the clear plastic straps that go under your arms and keep the brace down on your body. I don’t think they’re 100% necessary, but I used them and thought they were great for keeping the brace out of my way and feeling invisible. I'd say use them.

The 6.5 brace mated with the DBX helmet felt wonderful. I wasn’t wearing a bunch of clunky stuff, I was just riding. Like a true synergistic system. I took it on both mellow and more hardcore lift rides in Montana and was able to throw a pack on and take it off without disturbing the whole apparatus. 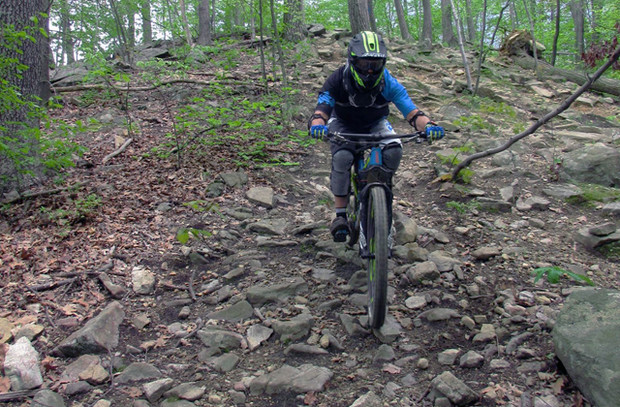 Just wearing it can give you the stones to not worry about your riding. Which is safer. Dave Peters Photo (New Jersey, not Montana)

The trail builders in Montana have put in some huge berms so I often found myself looking around banked, sweeping switchbacks and I never felt my view restricted by any contact between the brace and my helmet.

I’m not going to talk too much about looks, the DBX 6.5 looks like a neck brace. As do all neck braces. It’s comfortable and unobtrusive. Again, if it’s comfortable you’ll wear it, if you wear it, it will save you. That’s the point here. With both the helmet and the neck brace.