It was the last week of our adaptive ski program of which my title is the Program Director and that meant CRAZY HAT WEEK! Well let’s just say a hat wasn’t the only thing that was crazy about me. See picture. 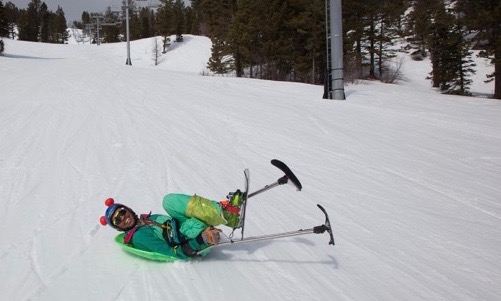 Being the last week of program, I was able to convince my supervisor to let me go on my own “spring break”. A friend of mine from UVM, Chris, was staying at our place for a few night showing his little sister around the Montana State University campus. That night, he was informed by the Guide Company he works at, Sun Valley Trekking, that The Bench Hut just opened up from Tuesday - Saturday due to a last minute drop out. I had been trying to plan some sort of ski trip the following week anyways and BAM there it was. The holy grail of Idaho Huts at our fingertips. Without a doubt the answer was yes.

Last day of Program. Oh happy day! Well kinda… I managed to acquire a head cold the night before and today marked only the second day I hadn’t skied for work. When I put it that way, it makes me sound like a crazy person.

Fluids were the name of the game and not the adult kind.

12 hours of sleep and one hell of a runny nose later, I rolled out of bed. The though of driving five hours to Idaho seemed like a nightmare. A warm shower was the only thought in my head.

Man, a shower can do wonders to a sick soul. I was a new man ready for the day! I cleaned up, started packing and was able to contact one of Chris’ friends, Chase, who was also in Bozeman heading to the Potato State. I was feeling well, but I was really detesting driving myself, but fortunately enough Chase was kind enough to take the wheel.

After quickly jumping from strangers to long lost friends, Chase and I, stuttered into Hailey, ID, hungry, sore, and ready to run a half marathon. Chris and Alex, another friend from UVM, welcomed us with open arms to their dirtbag cabin. Delicious sustenance and beverages (the adult kind) were waiting for our consumption.

We chatted, caught up and then go down to business. Luckily for us, Chris and Alex already planed the weeks meals out. Basically the heart of any backcountry trip. The plan of attack was to head into Bench Hut around 11am including the hour trip from their house to the trail head. From there it would take us approximately 3 hours to get to the Hut given it’s 6 miles in. “Let the dips begin!” I thought to myself. Then all we have to do is unpack everything and get ready for the week ahead. The powder jitters had started!

So much for leaving at 10am. We managed to get to the trail head around 12:00pm. It really didn’t make a difference. Daylight saving was on our side this time and the bittersweetness of Mother Nature as well. It was DUMPING!

We started hiking and shortly realized that breaking trail in two feet of snow with three tow behind sleds packed with food and gear was going to take a wee bit more than three hours. One step at a time we made our way. After five and a half long hours we stepped foot into Bench. Hut living here we come.

The following days went by quick! The video below is my slight knowledge behind a GoPro and some editing software. Hope you enjoy!

The Bench Experience from Vasu Sojitra on Vimeo.